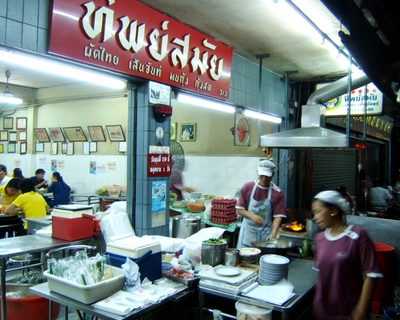 Monday evening after writing the entry for this blog, we took Brad and Silvia back down to Ratanokosin Island to have dinner at Thip Sa Mai, one of the oldest and most famous pad thai restaurants in Khrungthep.

Thip Sa Mai offers exactly seven items on their menu, each of them a variation on pad thai.  The best, in my opinion, is number seven – pad thai phiiset (special pad thai) – which is served wrapped in a paper-thin omelette. 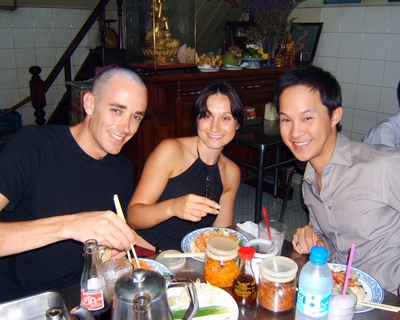 Brad and Silvia enjoyed the experience and Tawn showed them how to doctor their pad thai the Thai way: a little sugar, some ground peanuts, a spoonfull of chili-spiked vinegar, a dash of fish sauce, and a pinch of dried chili flakes.

Oh, and a squeeze of lime and a handful of bean sprouts if you like.  Yummy. 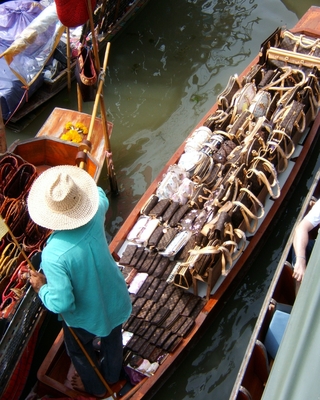 Tuesday morning we headed out on a Spiceroads bicycle tour.  This one included the floating market about 80 km southwest of Khrungthep.  The floating market is a tourist trap – witness the boat selling Louis Vuitton knock-offs!.  Especially if you arrive anytime after 7:00 am.  But in-between the tourist-oriented kitsch you can get an idea of what life is like along the canals.  Vendors still sell fruits and vegetables from boats, noodle soup and khanom – desserts.  We only spent about thirty minutes at the market itself before taking off via long-tail boat for an hour ride out to the Mae Khlong river and down to another town where we began our 30 km ride.

Pictures from the trip: 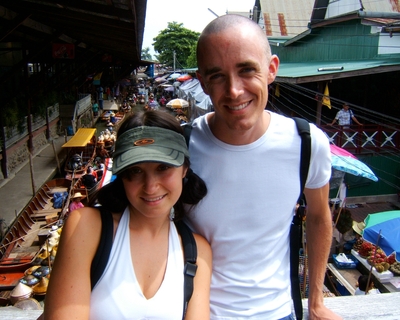 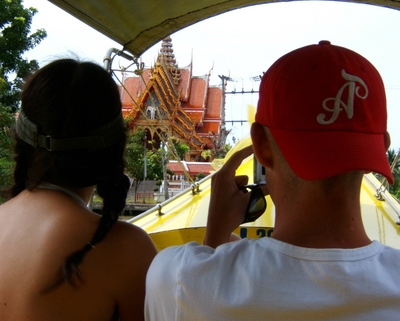 Left: Brad and Silvia overlooking the floating market.  Right: Passing a temple along one of the canals. 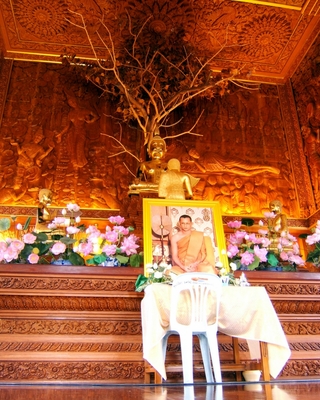 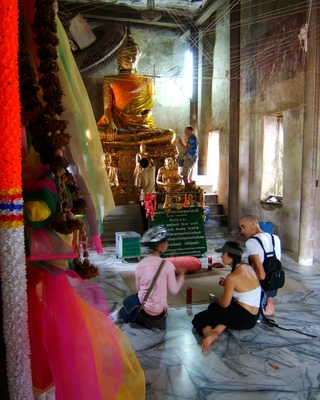 Left: Interior of a royal temple with the interior done in teakwood carvings.  A picture of the King when he served in the monkhood.  Right: At a ruined temple that has been overtaken by a large tree.  Inside is the Buddha image with strings tied to it as part of a prayer ceremony. 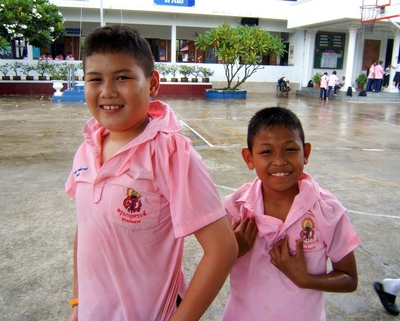 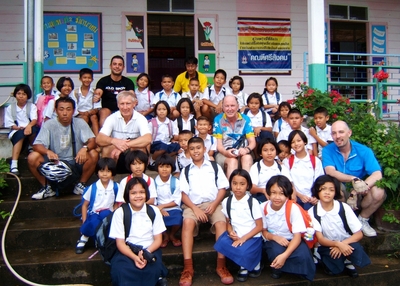 Left: We stopped at a Catholic school in the midst of a rain storm and two students came over to talk with the farang.  Right: Later on we stopped by a small 4-room school house and spend about thirty minutes talking with the students, who then sang us the “Goodbye” song (Below).