(With all due respect to the Thais, who don’t consider Thailand a “foreign” land.)

Over the past seven months of living in Thailand, one of the biggest challenges and one that I haven’t always consciously acknowledged, is that of not really having many friends here. 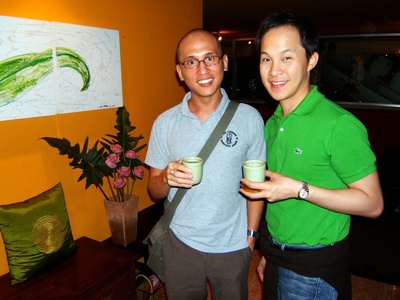 To be certain, I’ve been very fortunate to have Tod as someone who not only makes a good Thai tutor, but has also been a fun companion and good listener, being able to provide me with the balanced perspective of a Thai who has lived overseas for a decade.

Then there’s Masakazu and Mitsu, but they seem to always be unavailable as Masa flies for United and is away for twenty or more days a month.

And Tawn is certainly not without friends, all of whom have been kind and hospitable towards me.

But it is different than having a full set of friends here.  While I’ve never been the type of person who is in regular contact with all my friends – undoubtedly they are nodding their head as they read this – knowing they’re there has always been a source of comfort and support.

So in the past few months, since returning from the United States in March, I’ve been actively looking for more opportunities to make new friends.  The time spent is starting to pay off.  I’ve made friends with a fellow student at Union Language School, a Japanese guy named Kaz who has a Thai partner.  Also, I’ve met a Thai guy name Tam whose partner, Markus, is from San Francisco.

Slowly, the connections are being made.  These things take time, right?

Today Kaz and I ate lunch at a small Thai restaurant (outdoor place) whose proprietor was the poor Issan version of the character Beverly Leslie (played by Leslie Jordan) on Will & Grace.   Funny audio clip from the character.  If you know the series and the character, you’ll know what I mean.  Otherwise, the reference will be lost on you and it isn’t worth explaining in any detail.