In my previous post I mentioned that our street, Soi Asoke, had flooded for the first time this year and proclaimed that rainy season had arrived.  Today my proclamation was confirmed.

Like many great things in nature, this one proceeded in incremental steps, lulling you into a false sense of security that there was still time before anything really happened.

As early as seven o’clock this morning, the signs were there.  On my way to school, I noticed that the air was a bit cooler than it had been over the past few mornings and there was a breeze in the air.  The air was humid and the sky very overcast, different than it had been as of late.  But the clouds were only a light grey, nothing dark and brooding, no signs of immediate threat.

Throughout the morning, depending upon what window I looked out of, the view told me a different story: South, getting darker and gloomier; East, it looked as though it was already raining – but on closer inspection, the windows have tinting on them; North, I could see bright sunlight shining on the neighborhoods near Soi Ari.

At noontime, walking out of class, the temperatures remained moderate and the air was so humid that I felt like I would drown if I breathed in too deeply.  And while the clouds were darker, they still did not have that threatening, thunderstorm quality that I associate with Summer afternoon storms in the Midwest.  Still, no rain.

All afternoon, looking up from my computer, still a smooth dark overcast and still no rain.

Then, about five-thirty I looked out.  It was still light, but all of the buildings more than a block away from me were lost in the thick haze.  If it had been San Francisco, I would have thought it was fog.  As I stepped outside, I realized the rain had arrived.  Solid, steady, warm, thick drops of rain.  In the pool at the neighboring condo, a young lady continued swimming, the rain having no effect on her.

Within the hour, Soi Asoke was flooded.  I did not realize how bad it would be and, grabbing a large umbrella, headed downstairs to meet Tawn for dinner.  The water along the curb was more than 20cm (about 9 inches) deep.  I kept to the high ground along the store fronts, taking care to avoid sliding on the slippery tiles.

Less than a block away, were soi 21/1 enters into Asoke, I reached the shore of my island.  The water was closer to 30cm deep, the sidewalk were under water, and the passing vehicles were kicking up wakes that a squirrel could waterski on.

Turning around, I headed back to the higher ground on my island – my apartment – and called Tawn to tell him I would not be joining him.

Oddly, once I returned home the rain began to lessen but the thunder and lightening commenced.  For about twenty minutes we had a very intense light and sound display, nature’s version of “shock and awe”.  No power outages, thankfully. 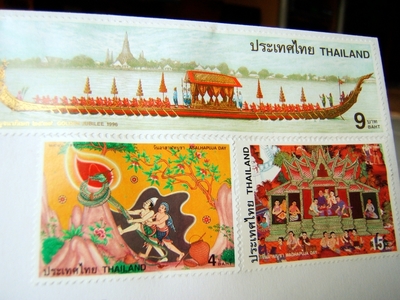 In other, drier news, I went to the General Post Office a few days ago.  While there is a branch located over on soi 23, by the gelato shop, they don’t have a very wide selection of stamps.  Especially for my nieces, whom I write regularly, I’m trying to provide a wide variety of stamps.  Thailand hasn’t gone to self-adhesive stamps yet and produces some very colourful stamps, many of which are inspired by Buddhist art.  Here are some examples.