Luckily I was not in Khrungthep to experience this.  Instead I was 70 km away in Ratchaburi province along the banks of the Mae Klong River on a full-day bicycle tour with Spice Roads.  As nobody I know here seems willing to ride a bike in Thailand (and I want to point out that the fear of the heat just hasn’t played out on either of my trips – it is a lot cooler on a bicycle than it is hanging out in the city), I was on my own, tagging onto a trip arranged for four German tourists.

More accurately, one of the fellow riders is a German expat who is working in Thailand for BMW.  I spoke briefly with his American-born wife while we waited at their condominium.  While she did not join the ride, she told me that they had gone on other trips with Spice Roads.  After a brief wait her husband (the expat), his seventy-year-old mother, and a French-German couple who were visiting them joined us in the van.  All were fit and except for the mother, able to speak English fluently.

My high school German classes came in handy as I was able to converse a little with the mother and was able to follow bits and pieces of the mostly-German conversation.  Danke, Herr McHan!

Traffic was light thanks to the three-day weekend and in less than ninety minutes we had arrived in Damnoensaduak, home of the nearest major floating market.  To say that it is a tourist trap is an under-statement.  In fact, arriving at about 8:15-8:30 any locals who had shopped were already back at home, replaced by bus- and vanloads of tourists. 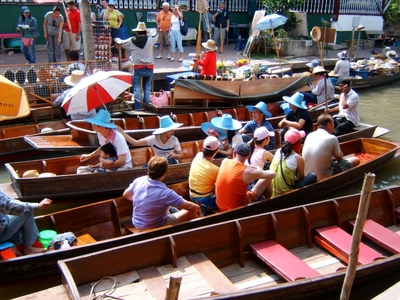 We didn’t spend very long at the market, maybe thirty minutes.  There are a number of halls and areas adjacent to the khlong – canals – where you can buy food, clothes, and souvenirs without having to hire a boat.  There are also several thoughtful scenic viewpoints built out over the water to enable the easier photographing of the market.  Left: A family of tourists in matching blue hats.

Our group bought some phonlamaay – fruits – and sampled them all.  I purchased some khanom khrung, the small half-moon rice flour pancakes that some of you may recall from the Thai Buddhist temple in Berkeley. 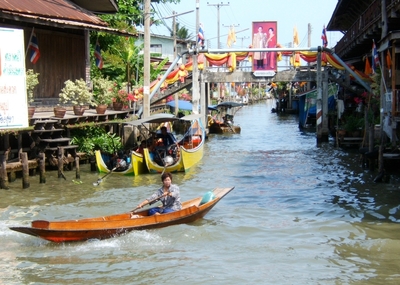 After this we walked across the street to another khlong and found ourselves in a much quieter area with only a few tourists who had wandered away from the main market and were exploring.  It was here that a lazy Damnoensaduak spent its Sunday morning, sitting on porches and sala – verandas – along the khlong.  The khlong are just like any street, with electric poles and sidewalks and addresses on the houses.  Only the street is water and the cars are boats.  Above: a quiet klong on the other side of town. 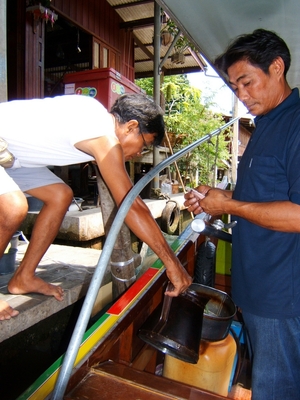 We boarded a long-tail boat that had been previously arranged and took off through the khlong.  After just a few minutes of passing other long tail boats carrying tourists, we headed into a tributary and thirty minutes after that were spilled into the Mae Klang river, a wide and slow body of water not unlike the Missouri.  Left: Along the way we stopped for fuel at a khlong-side store where petrol is dispensed from a steel pitcher with the help of an oversized funnel. 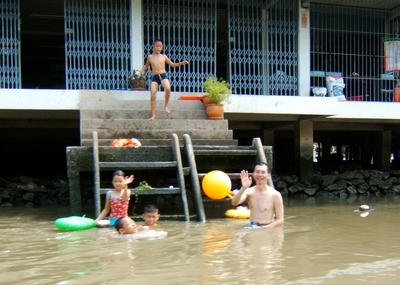 We continued past houses and wat – temples – some small and others grand.  People ran errands or sat on their porches watching life go by, swam in the water to cool off or washed clothes. 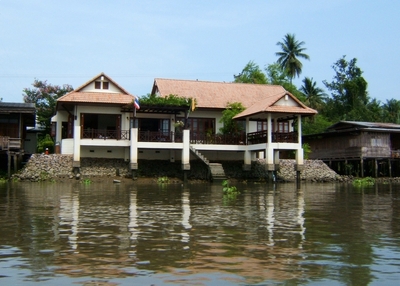 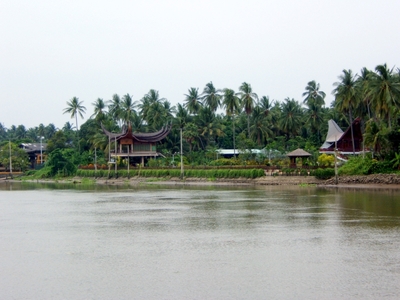 Above: Beautiful houses along the river.  The one on the right is a more traditional Burmese style house.

After an hour we turned from the Mae Klang back into a khlong leading to the town of Samut Songkhram.  This is where we disembarked, walking a block from the water to Wat Amphawan Chetiyaram, which was constructed by the princess mother Somdet Phra Amarintharamat and was the birthplace of King Phra Phutta Lertla, Rama II.  It contains beautifully-restored murals of the Buddha’s life and behind the main Buddha image is a picture of Khrunthep in the mid-1700s. 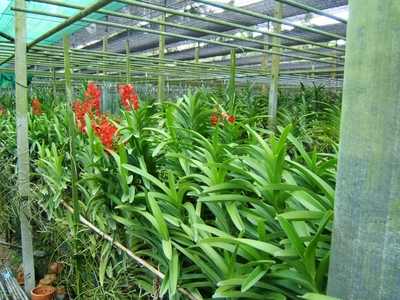 Back at the van, our bicycles were pulled off the racks and waiting for us.  We spent a few minutes adjusting seats, slathering on sunscreen (even though the sky was mostly cloudy) and strapping on helmets.  Then we took off along one of the roads heading several kilometers to a river where we had to wait for a small ferry to take us across to Wat Bang Kae Noi.  As this is the beginning of Buddhist Lent, many temples we encountered were having special events with gatherings of locals, food, and music to celebrate the ordination of the neen, or novice monks.  Above: Orchid farm

Inside Wat Bang Kae Noi’s main chapel the walls are covered with teak wood panels engraved with the story of Buddha’s enlightenment.  Above the main Buddha image is a giant bodhi tree, carved out of teak – even the individual leaves!  It is very beautiful. 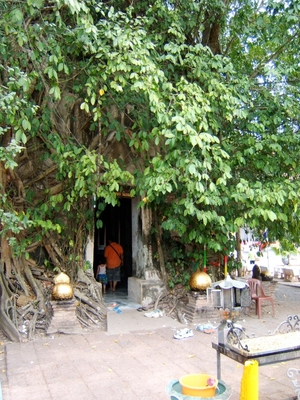 From there we cycled through coconut and banana plantations until we arrived at Wat Bang King, on the grounds of the final battle between the Thai and Burmese armies.  The main chapel has been overtaken by a huge bodhi tree and another banyan tree and over the centuries their roots have completely overwhelmed the structure such that the building itself doesn’t really exist anymore but is now within the trees.  The chapel is still in use and it is a very auspicious place for merit making.

A few more kilometers down the road through more banana, coconut and now some pomelo and lychee plantations, we stopped at the house at one plantation – just a small shack, really – and asked if we could buy a few pomelo.  The lady peeled them for us and we ate the fruit right there as her husband husked coconuts out front and the grandfather of the house lazed about on a hammock, laughing at this group of farang. 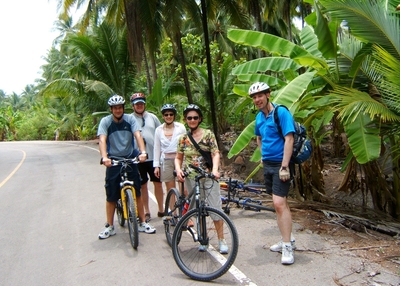 Above: Our tour group – the 70-year old German mother in the center. 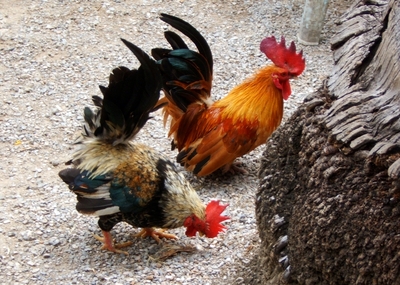 Twenty minutes later we arrived at a restaurant that had a large terrace overlooking the Mae Klong, taking advantage of the cooling breezes.  Our guide ordered a variety of delicious dishes, including a fried snakefish served in a tamarind sauce.  Right: Roosters in the restaurant parking lot. 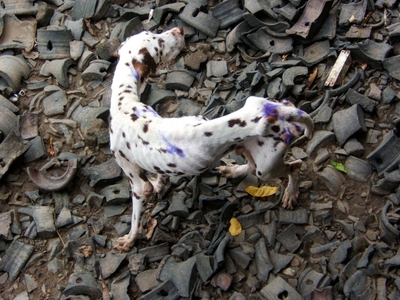 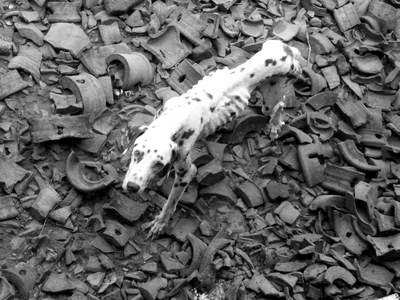 Above: an emaciated local dog along the riverbank below the restaurant.  The purple marks are a medicine used for sores, not vandalism as I had feared.  We threw some leftover food to him.  Notice the thousands of broken clay charcoal braziers that make up the river bank. 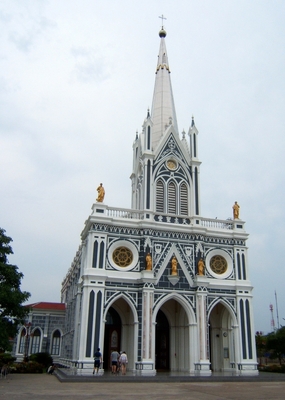 After a brief rest we resumed our ride, taking the final ten kilometers at an easy pace, stopping by one of the few Catholic churches in the area, the Church of the Virgin Mary or Asanawihan Maephrabangkerd.  It is very French Gothic in style and faces the Mae Klong river.

There are very few churches in Thailand, Christians making up less than 1% of the population, but some of the churches are very beautiful, undoubtedly continuing the Thai tradition of building beautiful places of worship.  Even the mosques, relatively unadorned per the Koran’s instructions, still feature beautiful architecture.

In front of the church there several young models posed on a bench for a photo shoot.  The makeup artist, a khatoey, took great interest in the farang bicyclists. 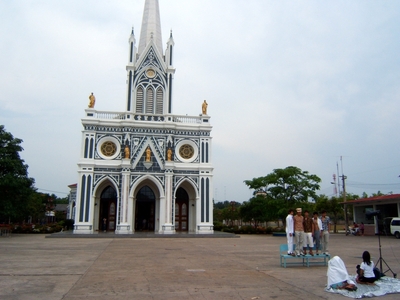 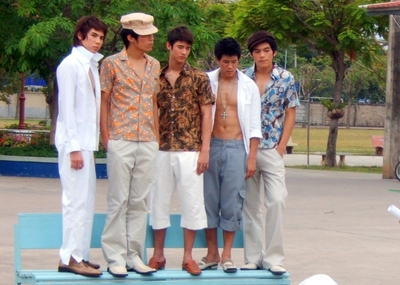 Above: What hi-so magazine will these models appear in?

At this point we were nearly back at the floating market, having ridden a complete circle.  The market was quiet, nearly all the tourists having left to return to Bangkok.  We met up with our van, cooled down as the bikes were loaded onto the racks, and then climbed in for our ride back to Bangkok.

Throughout the day I had had the opportunity to talk more with the guide, a 15-year veteran of the Royal Thai Navy, who goes biking regularly with his friends to explore Bangkok and the surrounding areas.  He invited me to join them and made some recommendations for gear.  So it looks like I’m establishing some links to the bicycling community in Bangkok.  Now all I need is a bicycle!