I think it is safe to say that rainy season can arrive any time now and I’ll be perfectly happy.  The sun has been really hot around here.  This morning the grey clouds were piling up and by the time I reached school the evidence of a just-missed rain shower was all around me.  But a few hours later the sun was out and that evidence had evaporated back into the humid air.

Last night I drove Tawn to the airport for a business trip to Seoul.  He’ll be back on Thursday night and I suspect the time will fly quite quickly.  Between trying to get several projects done for work and trying to actually comprehend my Thai lessons, the time seems to get filled.

After class today I did meet Tod for a couple of bowls of kwuaytiaw – rice noodle soup – in the Soi Arii area.  That’s where he lives and I’ve told Tawn that I think it is an area we should consider buying in.  Much more Thai, many more food options, and it stays open later at night than our neighborhood. 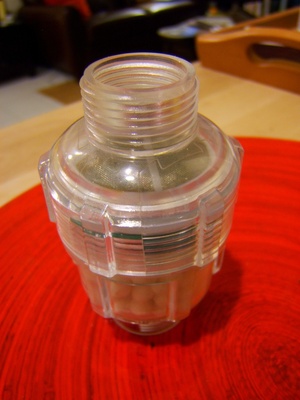 This is a picture of a so-called “aqua filter.”  It is an attachment that fits on the back of my Samsung washing machine, between the incoming water line and the machine itself.

At one end is a fine mesh filter that traps the occasional stray particle that works its way into the Bangkok Metropolitan Water System.  At the other end is a chamber with a bunch of small, white spheres that I at first thought were some kind of water softener.  I’ve since struck that theory and have no subsequent ones to replace it.

So about two months ago, several weeks before I headed to the United States, this filter developed a hairline chip and when the machine was running, a thin but high-pressure stream of water would spray all over the machine.  So I removed the filter and embarked on a quest to find a replacement.

This is an abbreviated story of that quest:

All it took was five trips to a total of three places over the course of two months, plus 274 baht.  Amazing Thailand.

Last week I received a call out of the blue from my cousin Brad.  Brad moved to Italy in January to be with his girlfriend, now wife, in a small town outside of Milano.  Before his move we had spoken a few times and I tried to answer his many questions about the expatriate experience.

So Brad was calling to say hi and to seek my advice on further matters.  And to tell me that he and Sylvia are thinking about coming here in July or August for a few weeks.  That would be wonderful.

All I need to do now is email Brad with some information about Bangkok and the rest of Thailand.  And start figuring out when Tawn and I are going to go to Milano!

Finally, I’d like to acknowledge a very nice email I received from Craig, an Aussie who stumbled across my blog while reading my trip reports on airliners.net.  Craig writes:

“Just this January I left Bangkok and returned to Australia after living there for 2.5 years.  The coincidental thing is that I lived in Asoke Place for my first year, and by all accounts I understand that is where you guys live too.  I was on level 21 and had a view over Soi Asoke towards Sukhumvit. It was a great place and gave me my first taste of the characteristic placid, nonchalent manner of thais – played out perfectly by good old Khun Doi in the ‘Juristic Person’ office.  Reading your songkran entry, I also think I recognise the woman you photographed beside the phone box outside the framing shop.
…

In the months leading up to leaving Bkk, I really had enough of the place and couldn’t wait to get back to Australia….however now since being back in sterile, clean Australia, I’ve got a serious case of rue and regret wishing I was back there amongst it all.

…
Anyhow, just a quick hi and a thanks for being so descriptive on your blog.  I love reading it and remembering.”

Isn’t the Internet pretty cool?  See, you can meet the most interesting people.  Well, many thanks to Craig for reading.  Yes, we’re here on the 25th floor of Asoke Place, enjoying that same southerly view.  Sadly, during this time of year the balconies aren’t getting any direct sunlight and my experiment at growing tomatoes is failing badly.  Perhaps during the winter when the balcony does get sun.

2 thoughts on “The Incredible Aqua Filter”