Friday was a holiday for me, Union Language School’s day late observance of Wan Chakri, so I was able to begin my work for IKON several hours earlier than usual.  This had the benefit of allowing me to finish work in time to attend the 4:00 pm yoga class at Prana Yoga.

It has just been over a month since I last went to yoga class.  I brought my workout gear with me to San Francisco but found neither the time nor location to attend class.  But I did do some yoga poses on my own, so it wasn’t as if I had entirely abandoned the practice.

Getting back into the yoga groove was a good thing, giving my back a much-needed stretch.  Plus, for the first time ever, I attempted a headstand.  Headstands are a pretty intimidating thing in yoga and I was definitely stuck in the, “oh, boy there’s no way I could do that!” mindset.  Probably a good lesson to learn that in life, often the only thing keeping you from doing something is yourself.

Anyhow, the instructor – a short, blonde, Swedish woman with whom I had not taken classes before – said, “Well, why don’t you try?  I’ll help you.”  So she walked me through the steps: 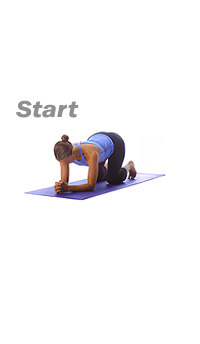 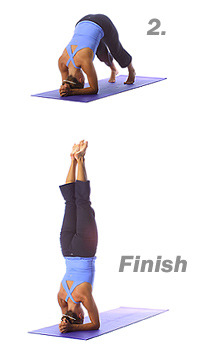 Missing from this picture is, of course, the instructor standing right next to you to hold your legs steady and take some of the weight off your shoulders and head.

This is where the farting comes in.  The instructor is about a foot and a half shorter than me and maybe 80 pounds lighter, so she was really struggling to hold onto me.  In the midst of her struggle she suddenly loses focus (I guess) and I hear her break wind.  While I’m standing on my head.

Talk about your awkward moments: nobody said anything and we all just kept focusing on our headstands.

Then she helped me out of the pose and told me that I did very well for a first time and to keep trying.

1 thought on “Headstands and Instructor’s Farts”