Sunday, Tawn went to his parents and spent a few hours with them, eating dinner and visiting.  One topic of discussion was Tawn’s mother’s upcoming birthday (Tuesday the 24th) and what to do to celebrate.  After dinner, Tawn’s mother told him that if she couldn’t have both her sons with her to celebrate, then she would just as soon not celebrate at all.

This is a positive sign.  Now if I can just get my father-in-law feeling that way! 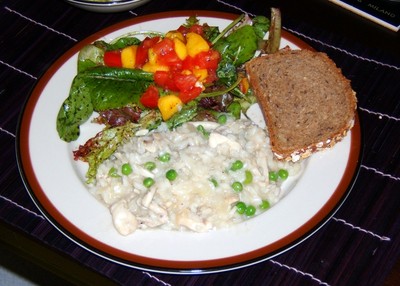 Sunday evening I reduced the stock to about half its original volume, making it easier to store.  I can add water later and reconstitute it.  Half of it went into the freezer, and the other half was used to cook chicken and mushroom risotto Monday night, accompanied by a mixed greens salad with balsamic vinaigrette and tomoato-mango salsa.  Very tasty.  I also prepared some broccoli, which I steamed in the rice cooker.  Being a rice cooker, I am used to the “set it and forget it” way of cooking.  It didn’t occur to me that brocolli really shouldn’t be forgotten while steaming.  By the time I remembered, it was Midwest-style.  Tasty, as I had steamed it with sliced garlic and Tawn tossed it with EVOO (extra virgin olive oil) and salt.  But really soft.

Reminds me of a time when Tawn and I took my grandparents to a Thai restaurant in Kansas City and my Grandmother Schultz, who passed away last July, complained afterwards that the vegetables were raw.  Of course they were cooked, but just to al dente not mush.