Do you receive emails forwarded from relatives expressing shock about “Islamic extremism” and concern about the influence of Muslim immigrants on “Western values”? If so, you are not alone.

You realize that their concern is misplaced, hysteria whipped up by media and politicians who need fear to drive ratings and reelection. You want to do more than just roll your eyes in exasperation. You want to help them take a step back, gather their breath, and climb down from the ledge.

This is the situation I’ve found myself in and I feel like it is time to do some research and provide some tools to help all of us respond to the fear about Muslims and Islam that is so pervasive in the west right now.

This will probably turn into a multi-part series and I encourage you to share your thoughts about how to help people avoid being sucked into the hysteria that I would describe as “radial Islamophobia”.

“Us versus them” is as old as humanity

The first thing I would say is that we should acknowledge that, by our very nature, humans are tribal creatures and are prone to an “us versus them” mentality. This has served us well over thousands of years – to an extent – but has served us poorly, too.

When you are exposed to something that appears different from what you are familiar with, it is no surprise that you might feel uncomfortable with it. You might be shocked, offended, or at the least a bit uncertain. Is it safe? What does it mean? How will it affect me? These are all reasonable questions.

By acknowledging that these feelings are natural, perhaps we can then move on to explore them. What are they based on? Are those feelings reasonable, when we exposure them to the bright light of fact?

This step is important, because blaming people for feeling uncomfortable with difference will only make them defensive. So let’s begin by empathizing a bit and acknowledging that things that are unfamiliar can make us uncomfortable or uncertain.

Once we do that, we can have a constructive conversation about history.

Nativism, the political position of generally being anti-immigrant, has a long history. For this entry, I will focus on the United States, as that is my country of origin. Here’s an interesting passage written by a well-known American:

“Few of their children in the country learn English… The signs in our streets have inscriptions in both languages … Unless the stream of their importation could be turned they will soon so outnumber us that all the advantages we have will not be able to preserve our language, and even our government will become precarious.”

The grammar certainly is more elegant than anything Bill O’Reilly or Donald Trump could muster! In fact, these are the words of Benjamin Franklin, written about German immigrants in the 1750s. [source] 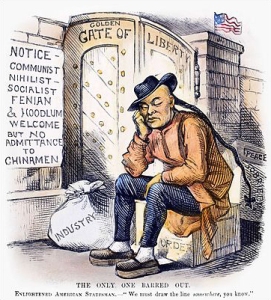 There have been successive waves of anti-immigrant sentiment in the history of the United States: Germans, Italians, Irish, Chinese, Poles, Russians, Chinese, Japanese (remember the internment camps?), Vietnamese, Mexicans, and Latin Americans have all been the target. And those are just nationalities. There have also been significant and sustained anti-Catholic and anti-Jewish periods.

All of these waves have been fueled by the same rhetoric involving some or all of the following: they will use up all our benefits, they refuse to learn our language, they steal jobs that would otherwise go to deserving Americans, they overpopulate our country, they will replace our culture and laws with their own, they will undermine our values.

Sound familiar? This is the same rhetoric being used with the current anti-Muslim propaganda. For more than fifteen generations in America, we have been making the same claims about the sky falling.

Muslims have been arriving here since the 17th Century, long before the colonies became the United States. A simple reading of history should be enough to help us be less hysterical.

But things are different today!

Which brings me to my final point: we only need to turn on the news or search the internet to know that things are different now. Yes, we have had waves of anti-immigrant sentiment that were just misplaced fears, but things are different today. The beheadings, the jihads, the terrorist attacks, the hijabs! Al Qaeda, ISIS, ISIL, Sunnis, Shias!

The imagery we see is fearful and the attacks on civilian targets are horrific. Extremists who want to provoke us are tremendously media savvy, especially effective at using social media to shock, scandalize, terrorize, and recruit.

The thing we need to ask, though, is whether what we are seeing is in any way representative of reality. First, do these extremists represent the Islamic faith? Second, how significant is the threat posed by these groups?

To answer the first question, consider when in the world have the actions of deranged individuals ever been representative of larger groups of which they are a member, even when they claim to be representatives of the group? The answer is, never. We don’t consider the recent racially-motivated shooter at a Charleston, South Carolina church as representative of white Americans despite his self-identification as a white supremacist. Likewise, just because someone claims to represent Islam doesn’t mean they do. 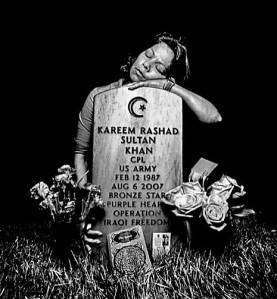 To answer the second question, let’s consider the media environment in which we live: the news media is inherently drawn towards the sensational because the only way to attract and retain an audience is to capture their attention with stories that are extreme, different, or engaging. A video of a religious zealot threatening to overthrow America is much more sensational than a video of normal, everyday, law-abiding citizens doing household chores and getting on with life.

What we see in the media (and, by extension, what politicians and everyone else talk about) is the sensational. Because of a number of cognitive biases, we over-estimate the frequency or representativeness of an event based on how easily we can recall such an event or how emotional charged that event may be.

Politicians are especially guilty of this. They can say the most inaccurate things and get away with it, because they know that riling people up and playing to their base fears will increase their media coverage and, quite often, their poll numbers.

[To learn more about how not to be ignorant in a world with personal bias, news bias, and outdated and incorrect information, watch this fascinating 19-minute Ted Talk.]

People talk about Muslims taking over countries and changing the very culture and composition of the land. But look at the facts for a minute: in France, the Western European country with the largest Muslim population, is about 10% Muslim. That’s the same percentage as Christians in Egypt and in Indonesia, the world’s most populous Muslim country. In the United States, Muslims make up only about 1% of the population. The amount of population change necessary to become a majority in France, let alone in the United States, is preposterous. Immigration rates and birth rates of immigrants pose no threat at all of Muslims taking over western nations.

There are countless other points that can be made, separating the rhetoric of fear from the reality. I would encourage you to share the above points with your worried loved ones who forward you Islamophobic rants.

I also suggest that you encourage them to shift their cognitive biases: go visit Islamic community centers or otherwise get to know your local Muslim community. As you learn more, you will come to see that they are not the “other”. They are you and me and just like every other American around us.

Again, I encourage your contribution to a constructive conversation. Let me know your ideas about how we can help people broaden their understanding and deal with fear in these uncertain times.

11 thoughts on “Responding to the Fear about Muslims”