Facebook exposes you to the most interesting memes, some of which make me think that people don’t take the time to read them before clicking “like” or sharing them with friends and family. Case in point, this “patriotic” post asking people to support the saying of the Pledge of Allegiance in public schools.

At first glance, who could be against the recitation of the Pledge of Allegiance in schools? It was the standard when I was a student and, other than the “under God” phrase (added in 1954 during the Cold War) which some could construe as state promotion of religion, it seems relatively harmless. In fact, when I was in high school, my drafting teacher, a devout Catholic and believer in separation of church and state, told students that they could omit the words “under God” if they chose to. 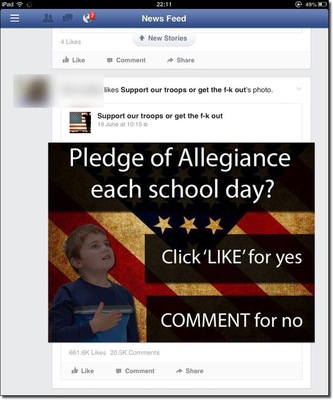 My real concern with this internet meme is the way it stifles freedom of speech. Notice that if you like the idea of saying the Pledge in school each day, you simply click the “like” button. But if you leave any comment (even a comment of support), that is tantamount to saying you don’t support the recitation of the Pledge in classrooms.

This mindset, that there is no room for discussion or dissent (even though such dissent is Constitutionally protected), is anathema to the concept of democratic freedoms. Think of the authoritarian regimes around the world – China, Iran, North Korea, and plenty of others – where those who speak out against the government are imprisoned, tortured, or even executed. The freedoms and values the United States flag represents include protecting those who choose to speak up against the government and those very same freedoms and values!

It strikes me as very unpatriotic to demand unquestioning obedience and very dangerous as well. The founders of the nation recognized the dangers of blind obedience. We should, too.

0 thoughts on “Intolerance Masked as Patriotism”