As good fortune and careful scheduling would have it, the return leg of my Hong Kong trip was aboard THAI Airways’ new Airbus A380. The A380, affectionately known as the Whale Jet because of its profile, is the world’s largest passenger jet, eclipsing the venerable Boeing 747’s floor space by almost half.

The first A380 went into service in October 2007 with Singapore Airlines after lengthy production delays. These delays produced a roll-over effect and THAI Airways, the ninth operator of the type, just received its first aircraft this past September. (Only 92 aircraft delivered in five years…) Initially, THAI used the airplane for Singapore and Hong Kong flights before adding Frankfurt and Tokyo. 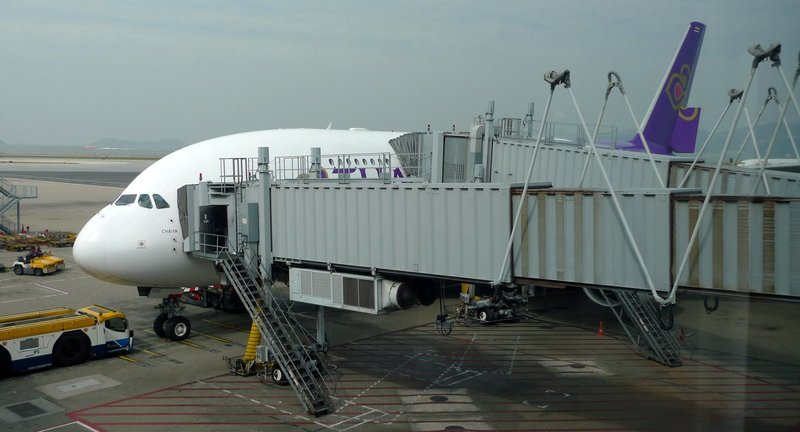 Unlike the Boeing 747, which has only a upper deck for only part of the length of the aircraft, the Airbus A380 has a full upper deck. This means that airport receiving regular A380 service need to have passenger jet bridges that can reach doors on both the upper and lower deck. In Hong Kong, one jet bridge is used for each level, although in many airports there are two lower level jet bridges and one upper level. 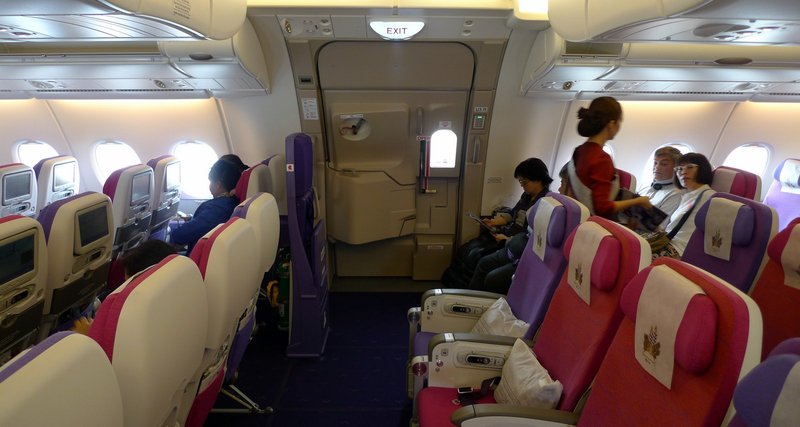 Most airlines reserve the upper deck for First and/or Business Class passengers. In THAI’s configuration, there is a small economy class cabin on the upper deck, the final eight rows of the plane. When you book your flight online and choose your seat assignment, the small upper deck cabin is not visible. Knowing that those seats existed, I had to visit a THAI ticket office and request an upstairs seat. Above, a view of this economy class cabin, which has a pair of exits in the middle of it, making for some generous leg room. 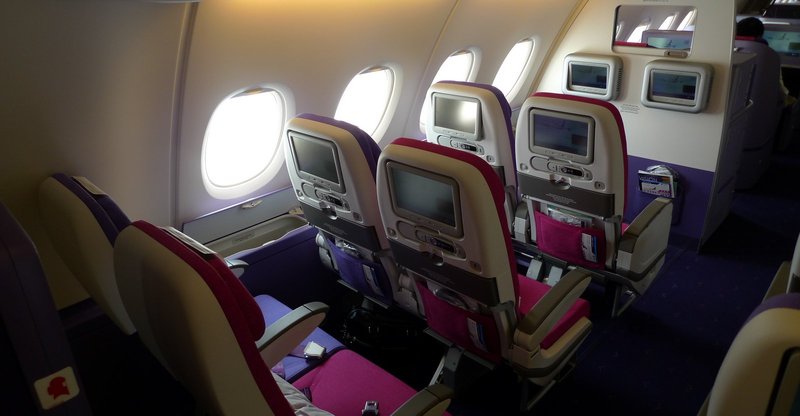 I was able to secure the last available window seat, the one you see on the left-hand side of the picture with the bin open next to it. One of the nice things about the upper deck is that there are small storage bins underneath the windows to supplement the overhead bins. This makes it easy to store small bags out of the way, freeing up your leg room while keeping items close at hand. 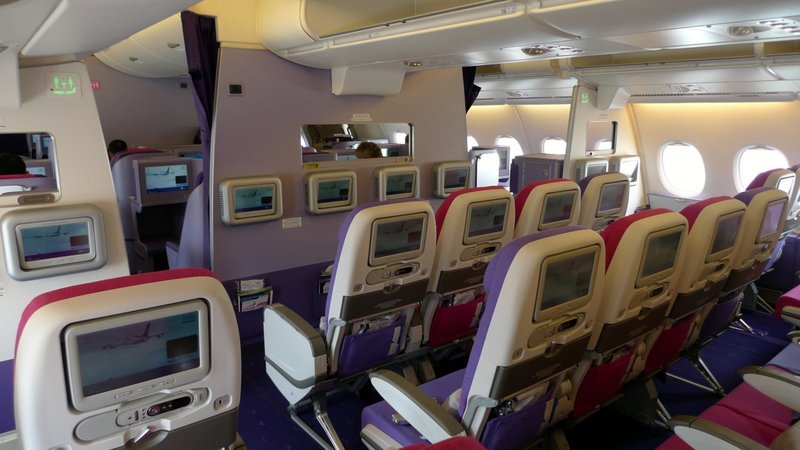 A look forward past the economy class cabin into the large business class cabin. Two interesting things I observed: there is a small security camera in each of the bulkheads, allowing crew members to see what is happening in each cabin, even if the curtains are closed. Also the overhead bins above the center seats have a different shape in business class than they do in economy. Usually, a single design is used in most aircraft. 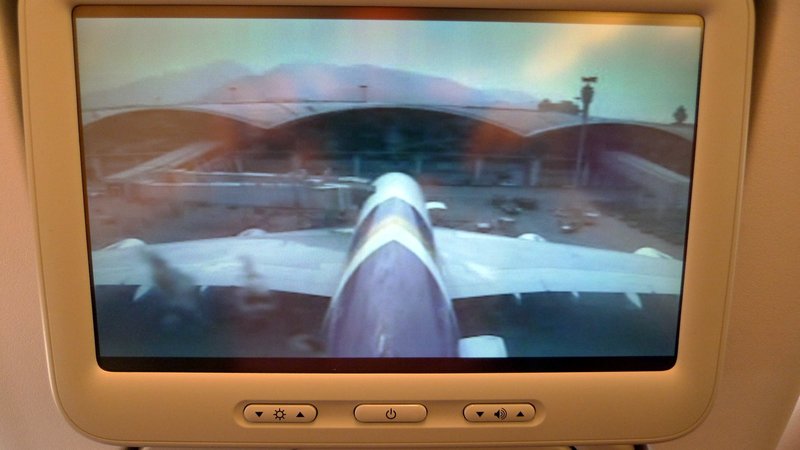 Another nice feature of the A380 is the tail-mounted camera. You can watch the view on your seat back monitor. Unfortunately, there appeared to be some dirt (bird poop?) on the lens, making the view a bit less enjoyable. I have been on other airplanes that have cameras located under the fuselage looking forward or down, but this tail camera seems to be a consistent feature of the A380. 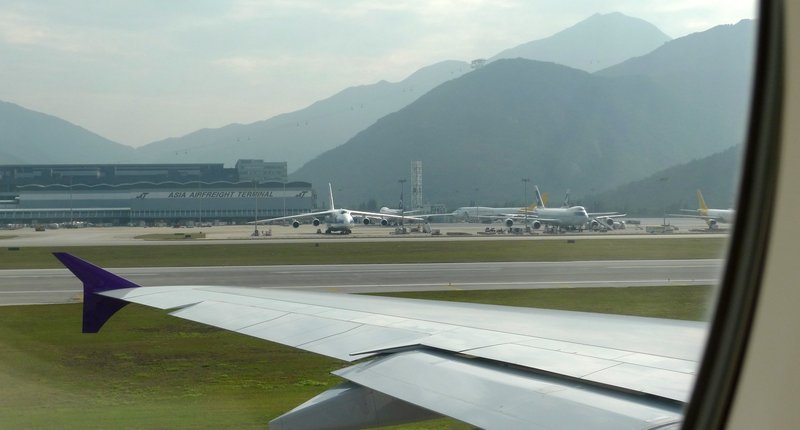 Taxiing to the runway, you can see a Russian made cargo jet and on the mountain behind, the tower from the Nong Ping 360 gondola. Here’s the view from the gondola at just about that tower, as I wrote about in this entry. 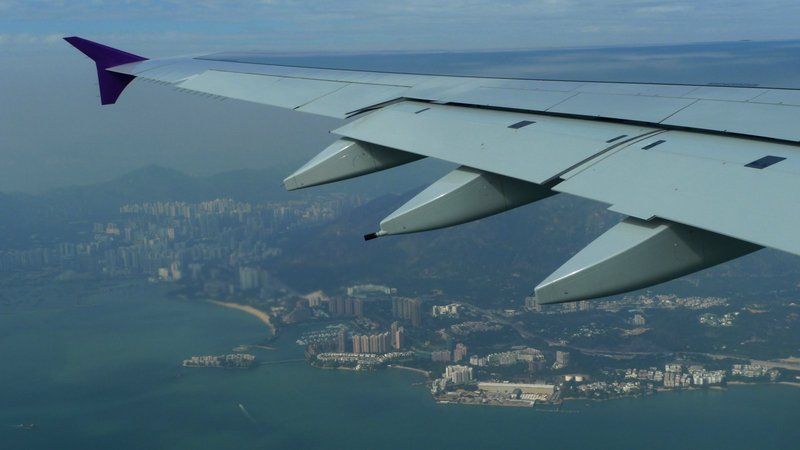 The view of the New Territories about a minute after takeoff. I lived in Hong Kong in 1998-99, not long after the new airport opened. In those days, there was significantly less development in this part of Hong Kong. Nowadays, there are clusters of high rise buildings everywhere as the city continues to grow, mostly vertically. 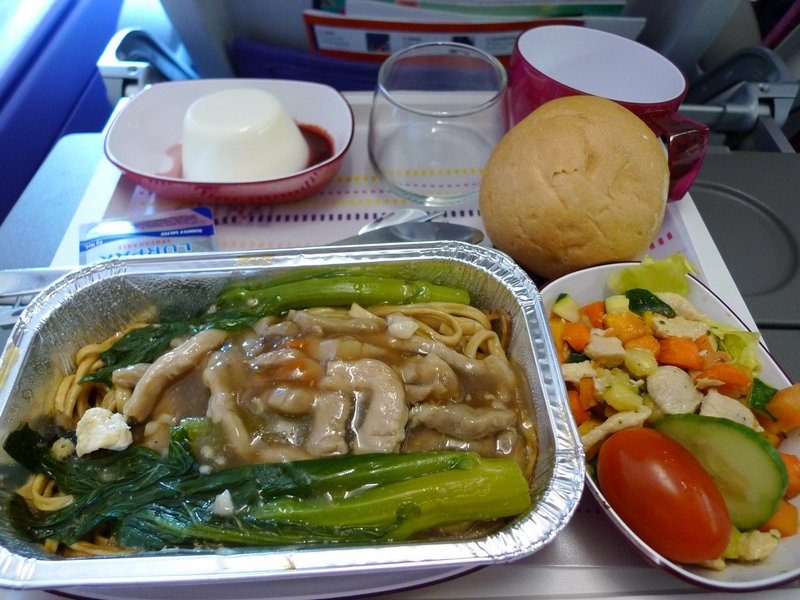 Inflight dining: chicken and greens served over egg noodles. There was also a salad of chicken and mixed vegetables and a panna cotta with berry coulis for dessert. The food was decent. 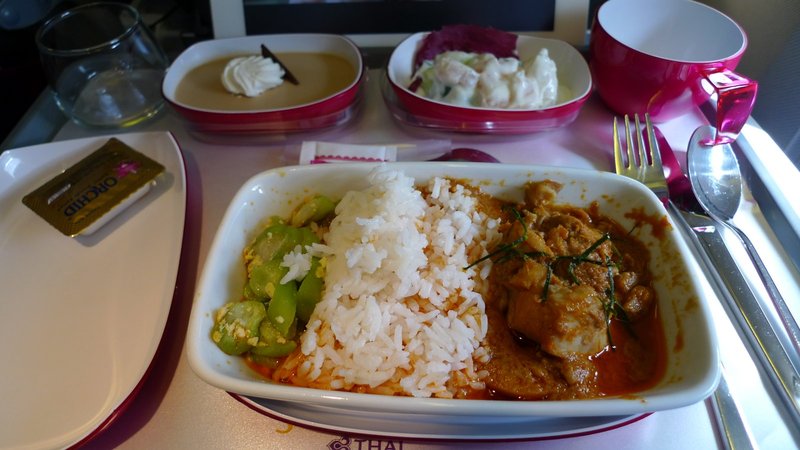 As a comparison, here is the food we were served out of Bangkok, a Penang curry with chicken and bitter melon. It was very tasty, actually so much so that if they served it from a restaurant, I would seek it out. Also interesting that the service out of Bangkok had sturdier dishes for the main course as opposed to the aluminum ones out of Hong Kong. The salad was a so-so shrimp salad and the dessert was a mediocre chocolate mousse.

If you would like to see highlights of the entire trip, include a tour through the business class and first class cabins upon landing, please view the six-minute video above. Coincidentally, on my way out the business class cabin, I was recognized by one of the flight attendants, a friend of one of Tawn’s friends.

Another video covering my flight from Bangkok to Hong Kong aboard a Boeing B777-200, is located here.

In this final shot from the gate in Bangkok, you can see that there are three passenger jet bridges attached to the plane, two on the lower level and one on the upper level. They have to be very careful as the bridge are close to each other. 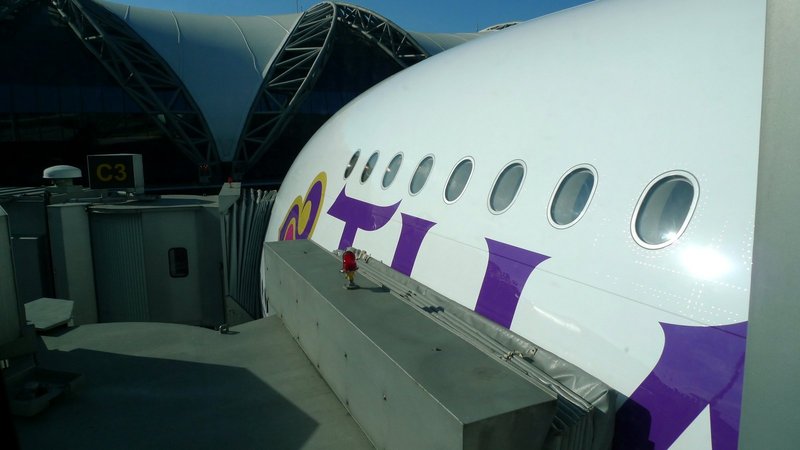 Here is a view of the two forward bridges taken from the window on the upper deck bridge. I hope you enjoyed the trip!