Bangkok-based Beervana, a specialty beer importer, recently sponsored a Christmas Luau, a Hawaiian feast cooked by chef Tim Butler (from Eat Me restaurant) and hosted at Flow House, Bangkok’s first spot for “indoor surfing” on the FlowRider wave machine. Bangkok Glutton writer Chow invited me to come along for the fun. 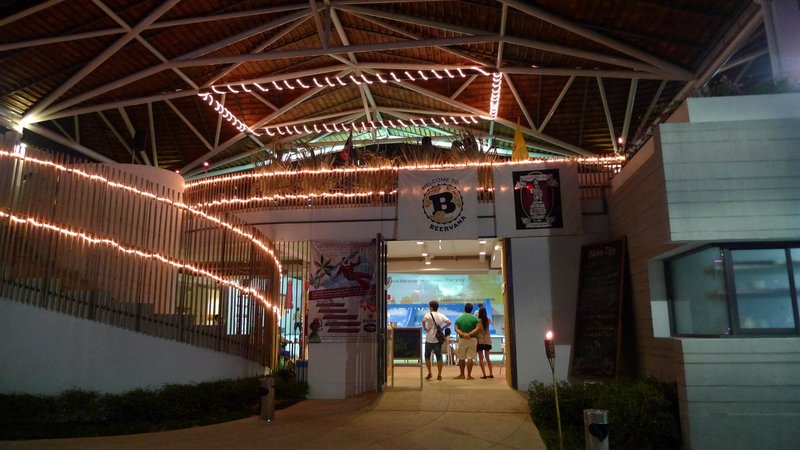 It was a warm and windless evening, which didn’t bode well for an outdoor dinner. The location, Flow House Bangkok, is on Sukhumvit Soi 26 near Rama IV Road. It has a nice second floor terrace that overlooks the Flow Rider wave machine and provided a private dining space for our twenty or so diners. 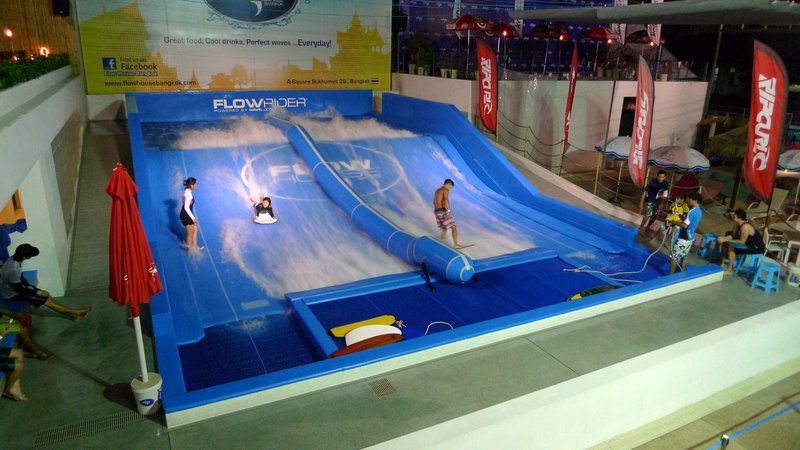 The Flow Rider provided plenty of entertainment, watching the (mostly younger) crowd surf on this high-powered sheet of water. Especially fun was to watch how, when they wiped out, the spray of water would carry them up the ramp and onto the platform at the top of the wave. Looks like fun!

While we waited for dinner to be served, Beervana’s owners plied us with a couple of their imported beers. Beervana searches for unique beers with character. They are typically non-pasteurized and non-filtered and are made by small, independent brewers. While I’m not a beer drinker, several of their beers were very enjoyable and all paired well with the food. 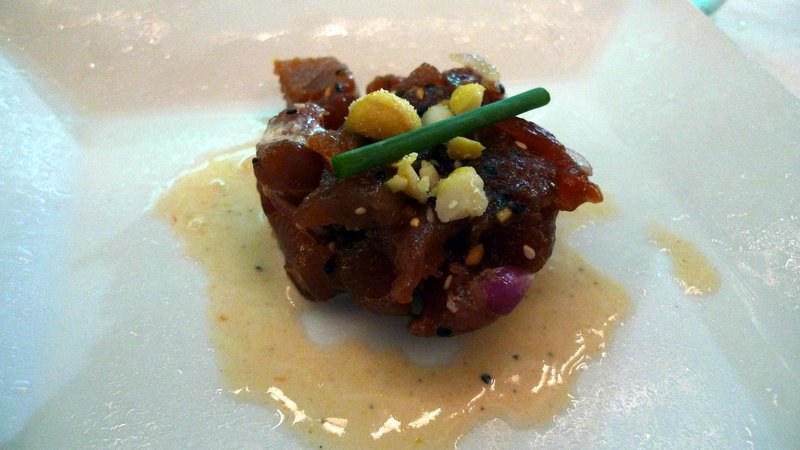 After a bit too long of a wait, the first course arrived, an ahi tuna poke with ginger and chili coconut vinaigrette. Poke is a typical Hawaiian dish generally made with raw fish mixed with various dressings. In this case, the vinaigrette made the poke into more of a ceviche. It was okay in itself but the accompanying beer, an Anderson Valley Poleeko Pale Ale, was excellent. 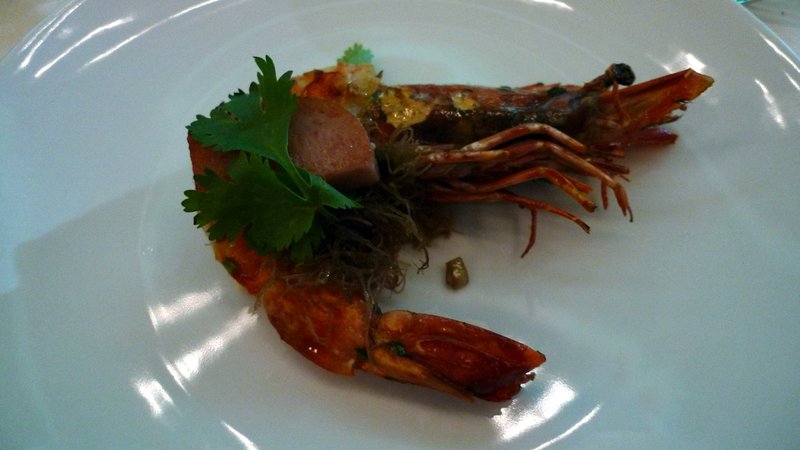 Second course was a grilled prawn with ogo ogo seaweed salad, basil, and Spam. When preparing prawns for large groups, the risk is that the prawns will be overcooked. In this case, the prawns were actually slightly undercooked. The seaweed salad was underwhelming and the prawn lacked seasoning. The addition of Spam (and cilantro instead of the basil listed on the menu) added nothing to the dish other than a convenient shortcut to make the dish more “Hawaiian”… kind of. Paired with an enjoyable Anderson Valley Boont Amber Ale. 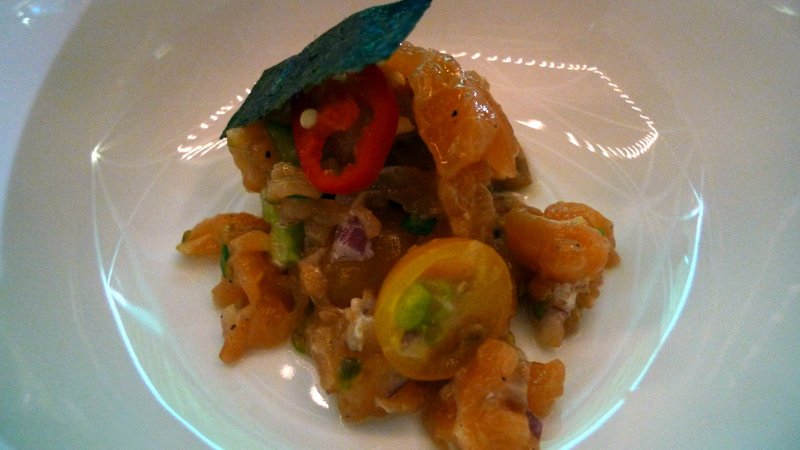 The third course was very nice, a spicy lomilomi salmon with heirloom tomatoes and coriander. Lots of lomilomi salmon in Hawaii is served with smoked salmon of so-so smoked salmon and is usually too heavy on the tomatoes. In this case, the salmon was excellent and there was plenty of it. Assertively flavored, it had a nice kick. The course was served with an Anderson Valley Solstice Cream Ale, which tastes heavily of cream soda and didn’t do much for me. 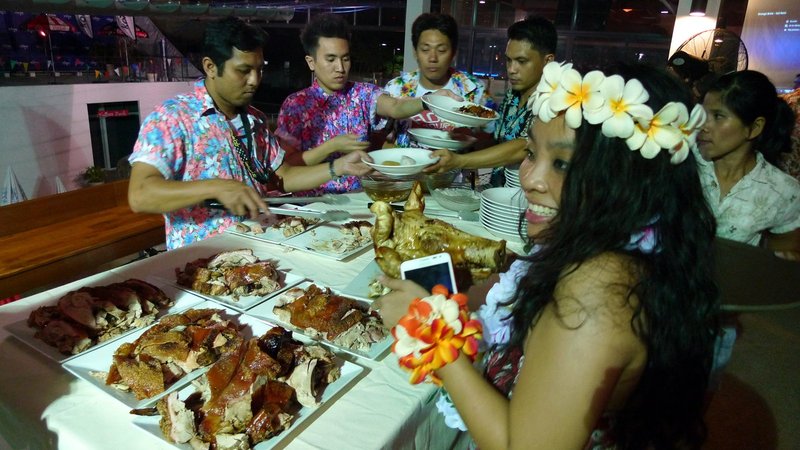 After a long wait, the whole roasted pig was served. It was ostensibly served “family style” but that meant that we needed to walk over to get our plates. 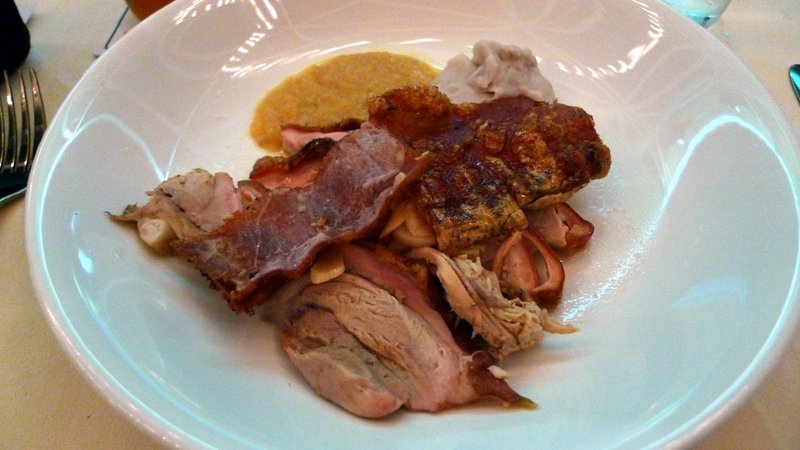 The pig was very flavorful and moist. Pieces of crisp skin were enjoyable but the skin attached to the sliced meat was rubbery. The taro puree and pineapple lime confit, while simple, were nice accompaniments for the pork. This was served with a Rogue Yellow Snow IPA, which was nice but I soon reverted to some more of the Anderson Valley Poleeko Pale Ale served with the first course. 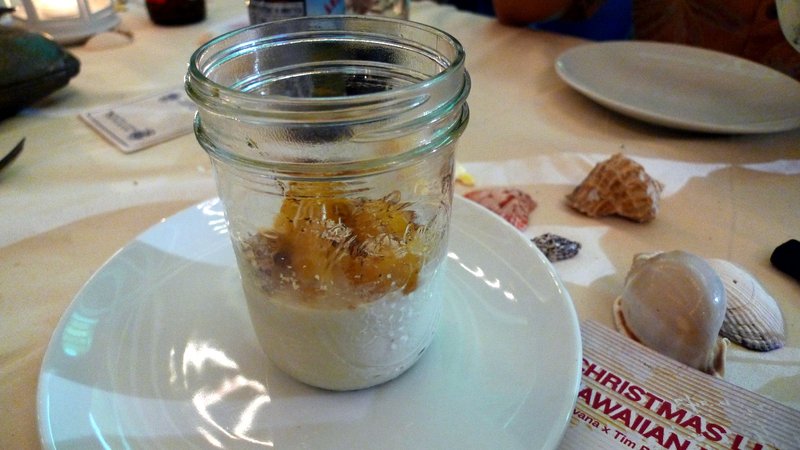 For dessert, we were served vanilla coconut custard with roasted pineapple and rum. This tasted okay but way too much gelatin had been used so the custard was rubbery. The pineapple went well with the custard, though. Served with a Rogue Chocolate Stout that complimented the dessert but I don’t like stout – too bitter for my taste.

All in all, it was a fun evening. It is fun to try a new experience and the idea of pairing beer with food is an interesting one. The beer was a bottomless flow, so if I were more of a beer drinker, it would have been heaven. Instead, it was just a slice of beach in Bangkok.