Here’s the short email I just sent to my senators and congressman regarding the “fiscal cliff” and the larger budget deficit and national debt issue. All three of them are Republicans. 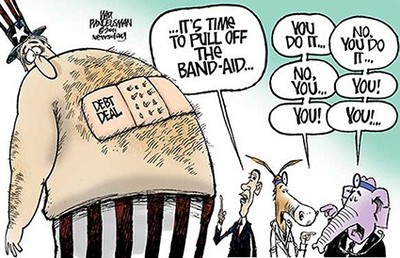 The election has come and gone and as your constituent, I want to make sure you’ve clearly heard the message: It is time for the Republicans and Democrats to compromise when it comes to addressing our country’s debt and budget deficit.

This means that revenue increases (including both reforming the tax code to close loopholes and deductions as well as increases in tax rates) are necessary in addition to spending cuts. Every reputable economist agrees on this.

I understand that the Republican Party wants to steadfastly hold to its values, but you were sent to Washington to govern, not to stonewall. Please start behaving like adults and work with the Democrats instead of acting like spoiled children who throw temper tantrums if they don’t get their way.

Honestly, it doesn’t seem to me that the country is well-served by either the Republicans or Democrats insisting on a “my way or the highway” approach to this issue. (Or any other issue, for that matter.) To tackle such a large issue, there is going to have to be give and take. All of us will have to sacrifice some of what we want in order to achieve a larger goal that we all agree is important: getting our fiscal house in order.

As near as I can tell, the idea that both parties need to compromise is a commonsense position that the vast majority of Americans agree with, no?