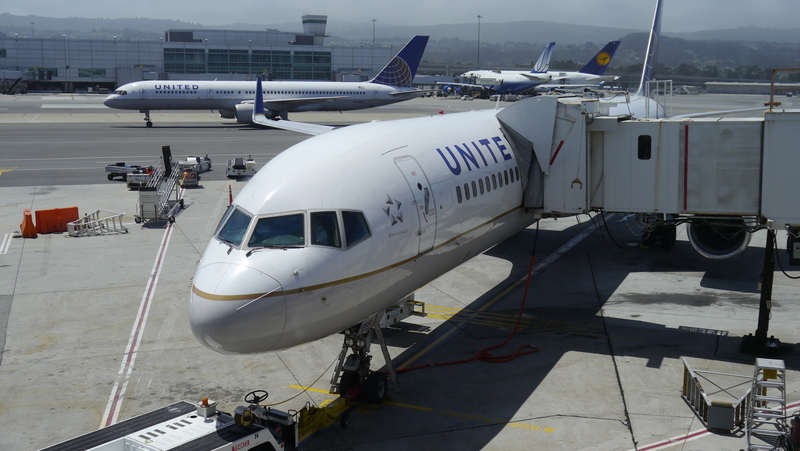 While waiting for our flight to Maui, I capture this picture of a pair of United Boeing 757-200s, a United 747, and a Lufthansa Airbus A380 (the largest commercial plane in the world) at the international terminal. Sadly, didn’t get to see the “whale jet” depart while we were there. 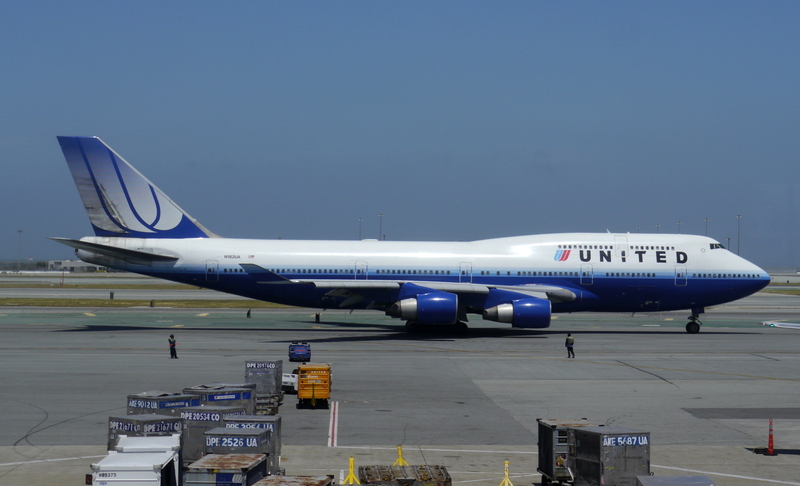 A United Airlines Boeing 747-400 taxies to the runway for a trip to somewhere in Asia. Its wings are heavy with fuel and you can see how far they flex back downwards. Pity the poor economy class customers who, on United, are still stuck watching inflight entertainment on “the main screen” at the front of the cabin. 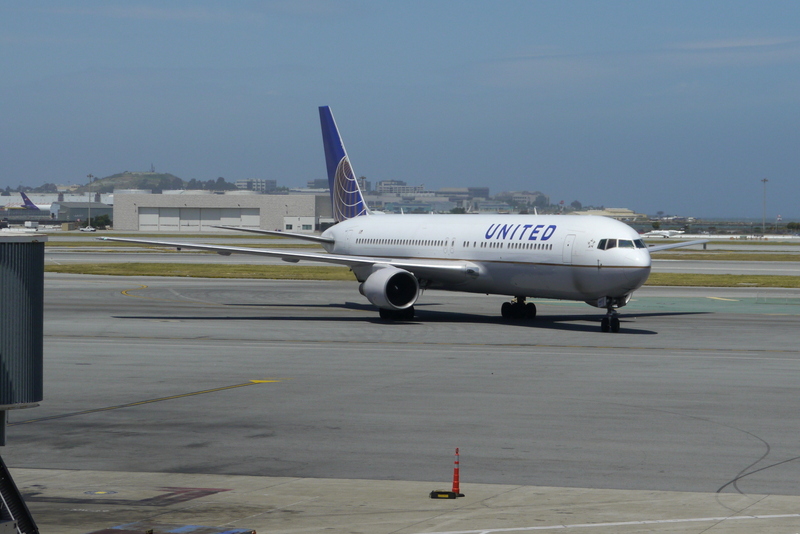 Our plane to Maui, a Boeing 767-300, pulls up to the gate more than a half-hour late. The hills of Oyster Point in South San Francisco are in the background and some of the Genentech campus is visible. Our plane is in the new United color scheme, an uninspired hybrid of the Continental pain job and the United name.

Video of our take off roll from San Francisco as well as our landing over the sugar cane fields in Maui. 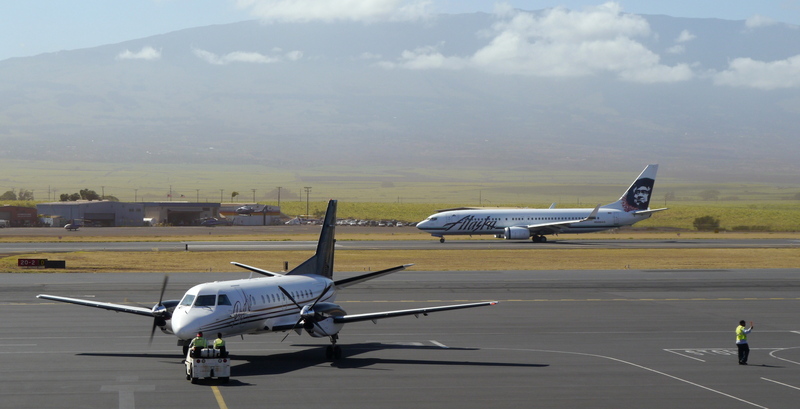 Early morning at Kahului Airport on Maui. An Island Air flight pushes back as an Alaska Airlines Boeing 737 beings its take off roll to one of the more than a half-dozen destinations they serve from Maui.

Video of our departure from Kahului Airport on Maui and the beautiful reefs just off the end of the runway. 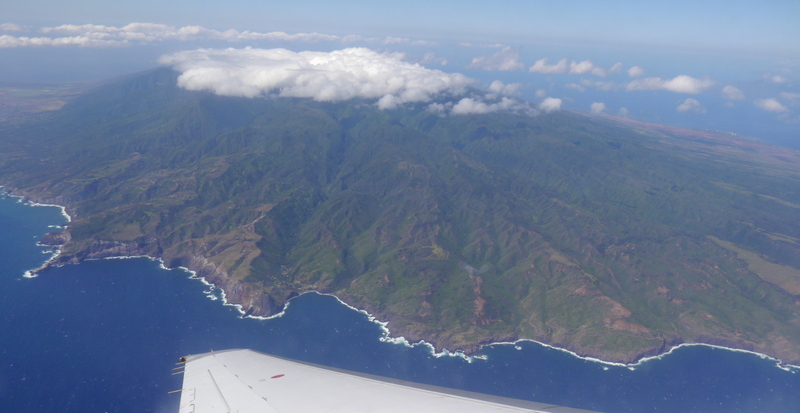 The beautiful view of West Maui as we climb out of Kahului and head towards Honolulu. If you are flying in the islands, I recommend a window seat. 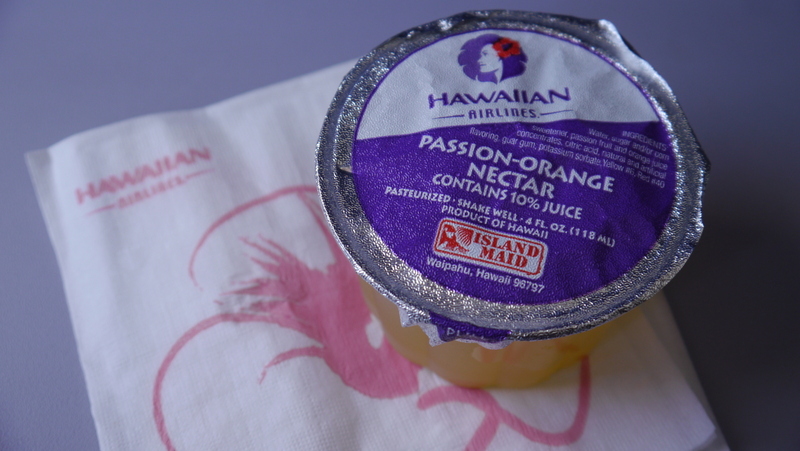 Our inflight service on the short Maui to Honolulu flight consisted of a container of passion-orange “nectar” – which contains only 10% juice. This is the same thing served on every Hawaiian Airlines interisland flight. Talk about simplicity of service! 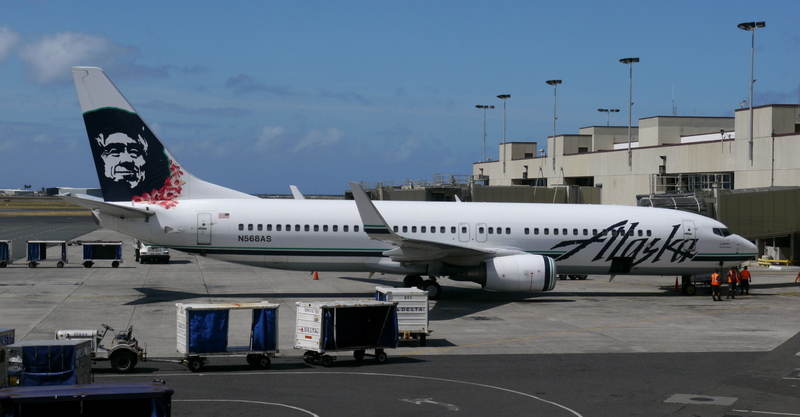 Alaska Airlines has built up its presence in the Hawaiian islands the past few years, operating these Boeing 737-800s which are certified for longer-distance overwater flights. Alaska specializes in flying to connecting smaller markets (Sacramento, for example) to the islands, trying to avoid as much direct competition with the larger mainland carriers. 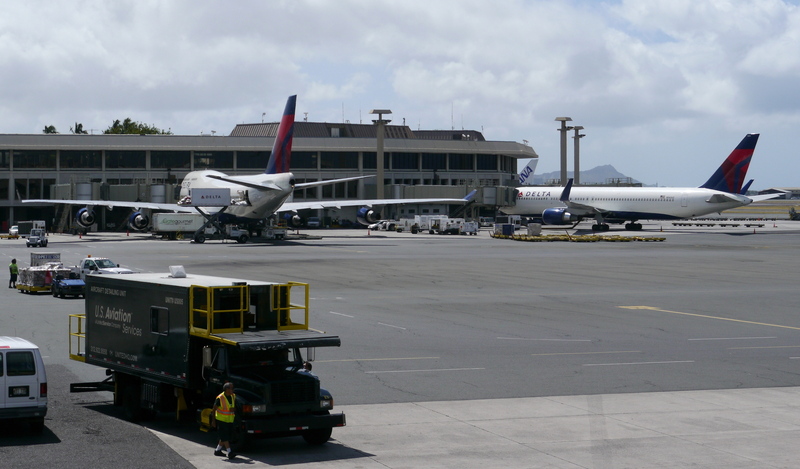 Delta Airlines has a large presence in Hawaii since their merger with Northwest Airlines a few years ago. They operate daily flights to Tokyo and Osaka, and seasonal flights to Nagoya and Fukuyoka, Japan. There is a Boeing 747-400 on the left and a Boeing 767-300 on the right. You can just see the tail of an All-Nippon Airways (ANA) jet and the rugged silhouette of Diamond Head in the background. 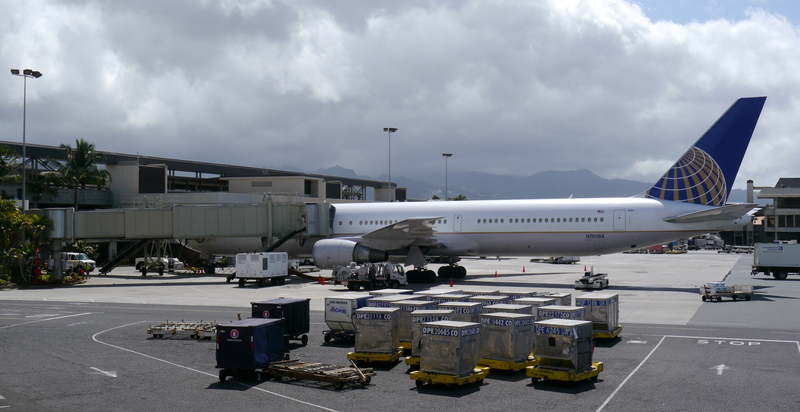 This United Airlines Boeing 767-400 is originally from the Continental Airlines fleet and operates daily flights to Guam. We flew this flight last year when coming to Kauai, with an interesting Bangkok-Hong Kong-Guam-Honolulu-Kauai routing. 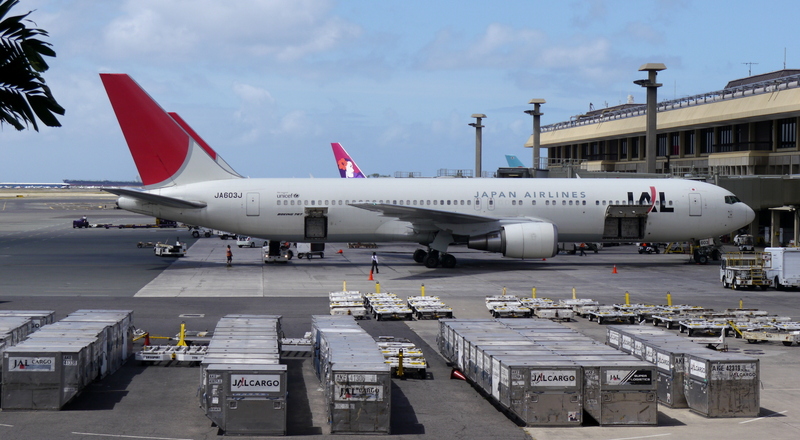 A pair of Japan Airlines Boeing 767-300s, one almost obscuring the other. Hawaii is a popular destination for Japanese tourists and five different airlines complete to carry them. 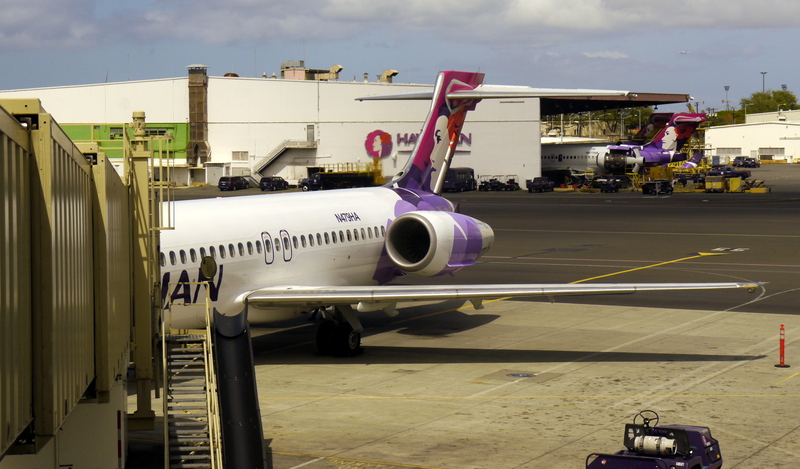 A view of the Hawaiian Airlines maintenance facility behind the interisland terminal. Must be nice to work out in the fresh air every day, although it must be a mess when a rain shower comes through. Hawaiian usually is at the top of the Department of Transportation’s on-time list even though their aircraft work a very busy schedule with a higher-than-average number of flights each day. 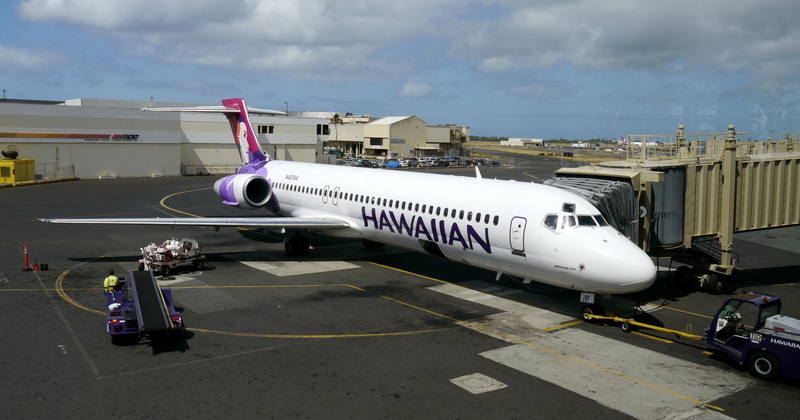 Our bird for the twenty-five minute flight from Honolulu to Kona, a Boeing MD-87. This plane is an updated version of the Douglas DC-9, which traces its roots to the early 1960s. 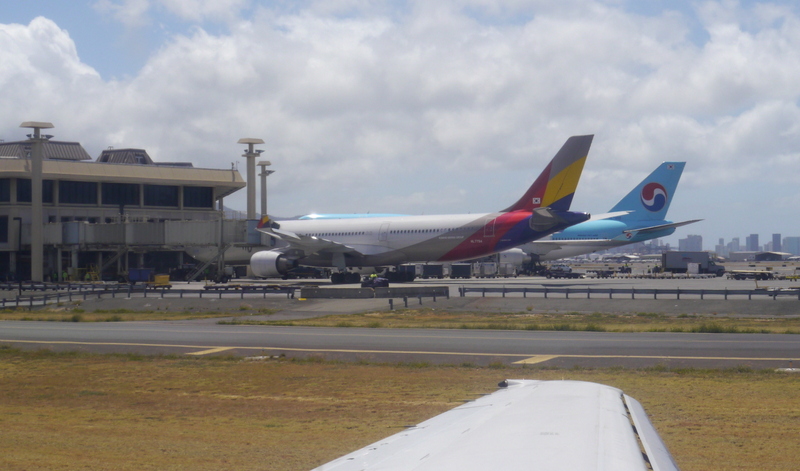 A pair of Korean jets at the gate in Honolulu. In the foreground is an Asiana Airlines Airbus A330. A Korean Airlines Boeing 747-400 is in the background. Interesting that Korean flies such a bigger jet – nearly twice the passenger capacity – in Honolulu. Perhaps this is because of their code share with Hawaiian Airlines. 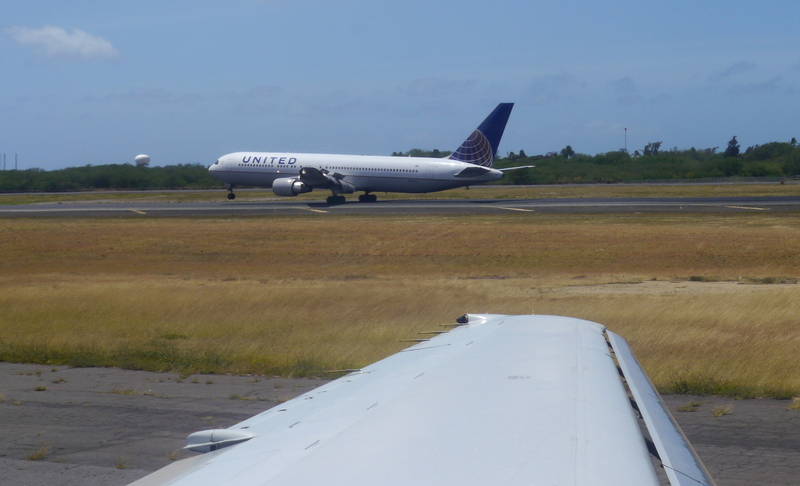 A United Airlines 767-300 touches down as we taxi to the end of the runway. Tough to shoot these action shots and I missed the burst of smoke when the tires first hit the pavement.

Video of our departure from the “reef runway” at Honolulu International Airport. 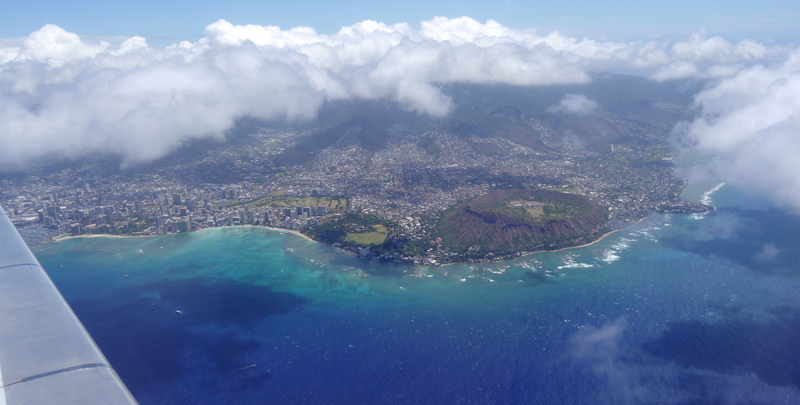 Climbing out of Honolulu, you see Waikiki Beach on the left and Diamond Head crater on the right. Our hotel was on the beach right where that large patch of grass is to the immediate left of Diamond Head. 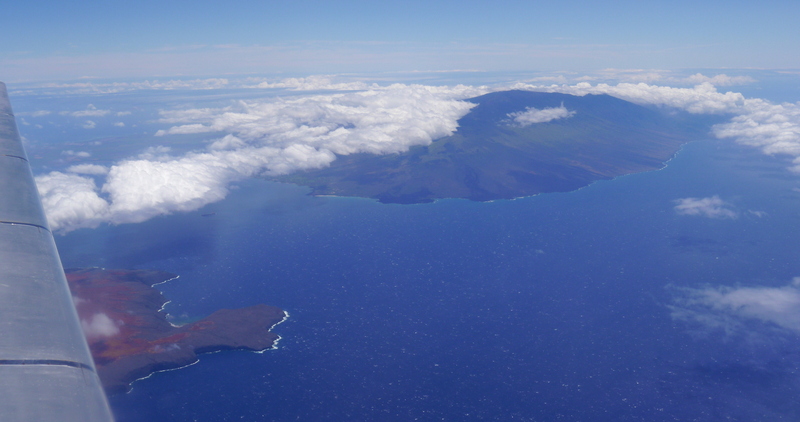 Flying over Maui. Just below the middle of the cloud line on the left side of the picture, you can make out a speck of an island. That’s Molokini crater, a fantastic spot where we went snorkeling. 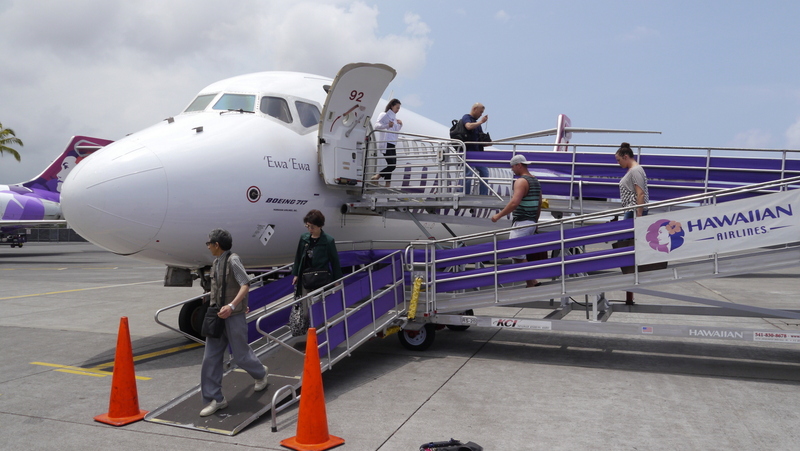 We arrived in Kona and deplaned using this accessible ramp. Much easier for people with mobility impairments to use, although sort of ungainly looking. 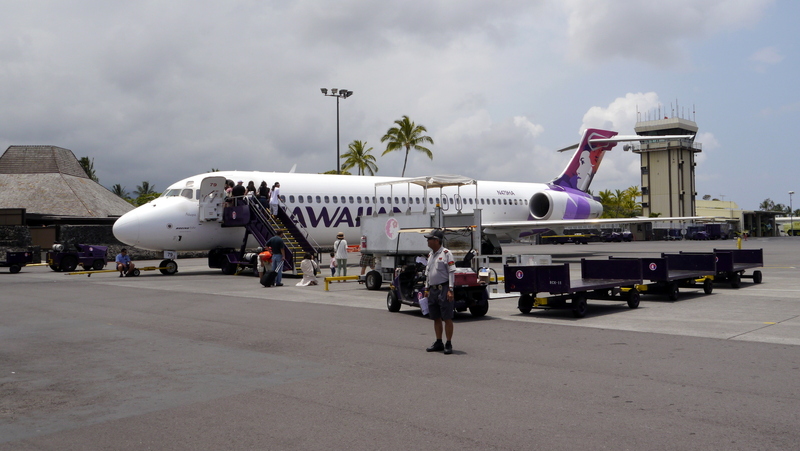 Another Hawaiian Airlines MD-87 at Kona. Kona is a small airport with two gate area “clusters”. While we had purchased our ticket from United Airlines with the code-share flight on Hawaiian from Honolulu to Kona, connecting to a United flight to San Francisco, schedule changes from both airlines resulted in a short, 45-minute connection time. At most airports, this would be sufficent, but we (and about 20 other passengers who were making the same connection) discovered that you have to exit security from the Hawaiian Airlines gate area, walk around the front of the terminal building, and pass through security again to enter the United gate area. Inconvenient.

Back to the Mainland

While heading out to our plane, I caught this picture of a Boeing 757-200 preparing for its trip to Los Angeles. This plane leaves just a half-hour after the San Francisco-bound plane, resulting in a bit of congestion at the security screening for the United gates. 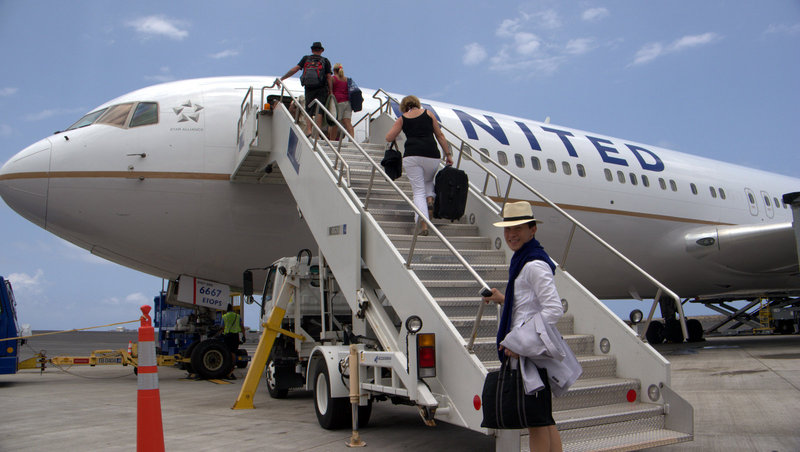 While we were in a rush to get to this fight, we still took time to pause for a picture. It is a shame that so few airports in the United States board by air stairs anymore. In fact, Kona is the only major airport in Hawaii that hasn’t moved to loading bridges. There’s a certain romance to walking across the tarmac and it certainly makes you appreciate the size of the planes. 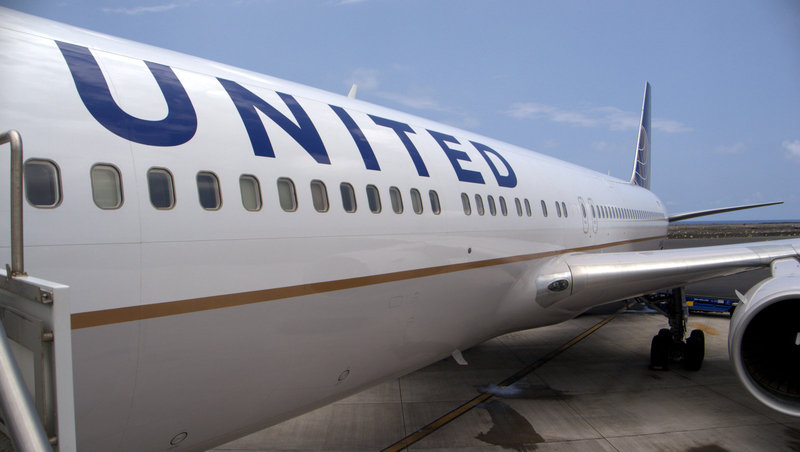 View looking towards the tail moments before entering the plane. Tawn and I were the last passengers aboard.

Departing out of Kona, I made sure to select a window seat on the right-hand side of the plane. Tremendous view of Mauna Kea, the 13,796-foot (4200-meter) high mountain that forms the Big Island of Hawai’i. Hard to see in this resolution of the picture, but when I look at it in Picasa, you can see the white specks that are the observatory. 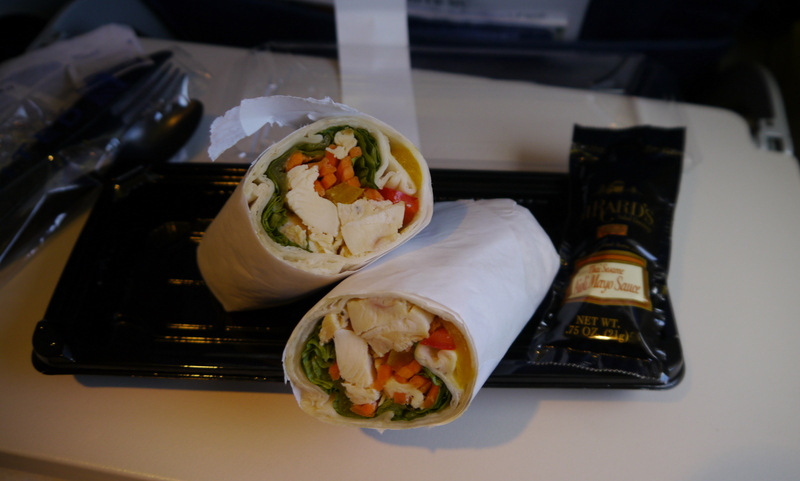 Chicken wrap “meal” for sale on the five-hour flight from Kona to San Francisco. This plane does a turn-around in Kona with the same crew that flew in from San Francisco in the morning. All of the catering, including the food, is boarded in SFO, flies across the Pacific, and then is served (er, “sold”) on the return leg. When I was considering my options, the flight attendant mentioned that she still had some breakfasts from the morning flight, in case I wanted to buy one of those. On approach into San Francisco International after our trip to Kansas City. You can see the salt evaporation ponds in the Mountain View, East Palo Alto, and Redwood City area. Taken from a CRJ-700 regional jet, which operates this three-and-a-half hour flight. Long time to be in an RJ but at least United is operating two nonstops a day after years of having to connect in Denver.

A view of the F gates at San Francisco international airport with Mount San Bruno in the background. 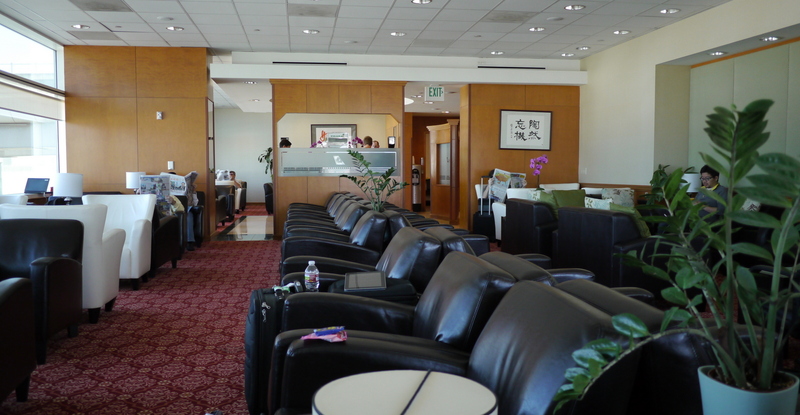 EVA Airways lounge in San Francisco. I cashed in some miles so my travel companions could have lounge access, figuring since this was their first time flying so far, it would be good to make the experience as relaxing as possible. The lounge isn’t the nicest in the world but offers more comfort than the gate area seats. 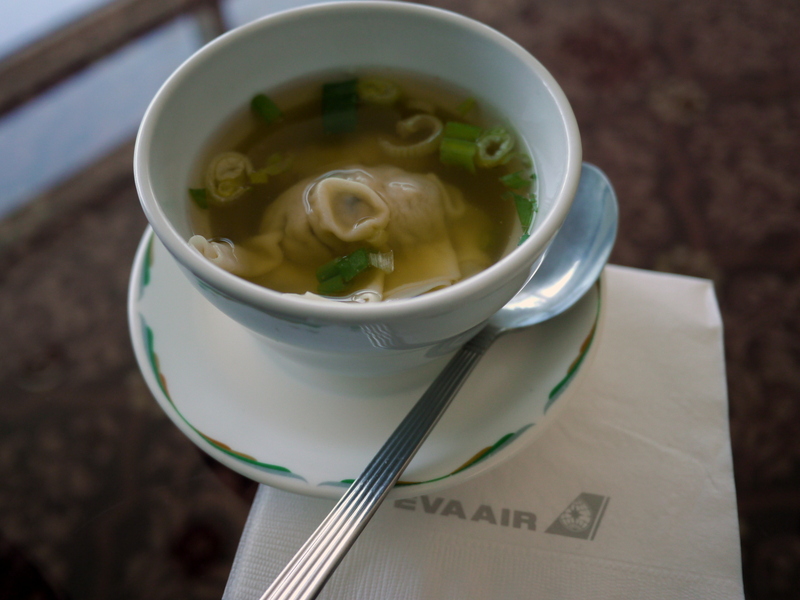 Wonton soup. The bowls of wontons are covered with plastic wrap, then you ladle the hot broth yourself. Seems to work pretty well. 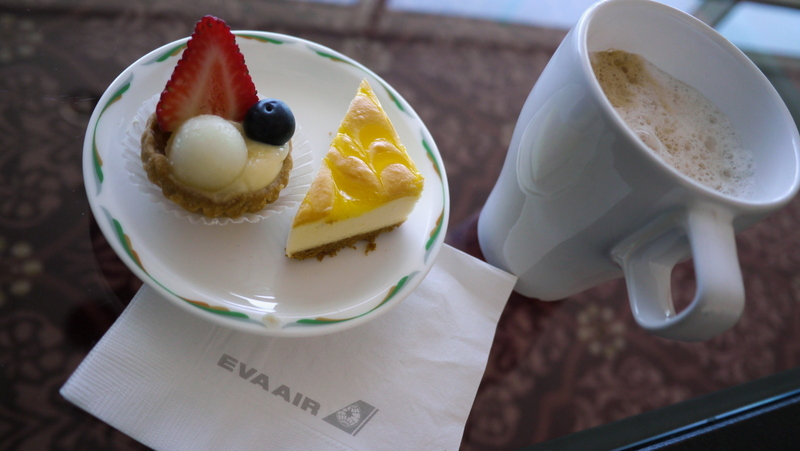 A selection of small desserts and a passable latte from an automatic machine. 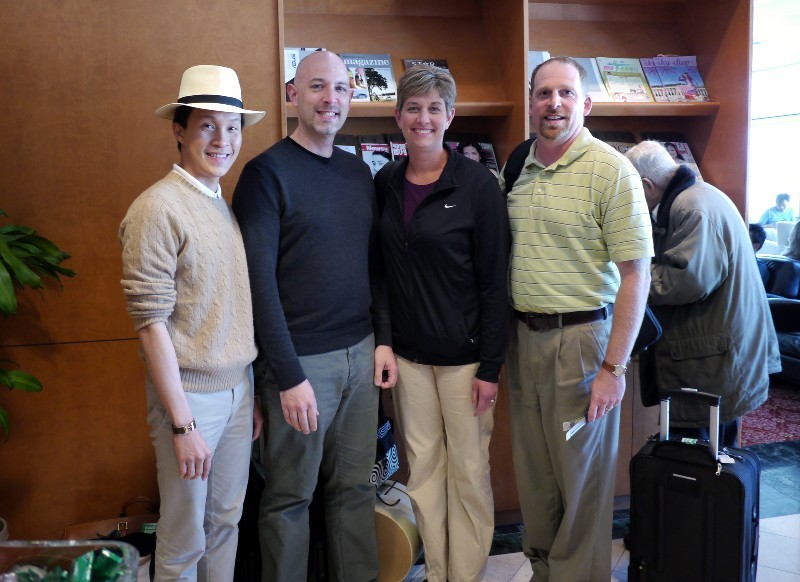 Before leaving the lounge, I asked the attendant to take a picture of us: Tawn and me with my sister, brother-in-law, and some random man who is looking for a magazine to read. This was their first trip to Asia and you can see the anticipation on their faces. 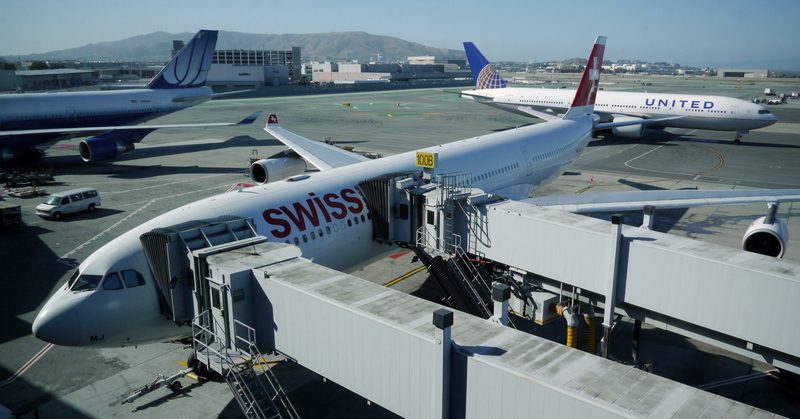 On the way to our gate, I see a Swiss Airbus A340 preparing to depart for Zurich. A United Boeing 777-200 taxies by in the background. Brother and sister posing in front of a United Airlines B747-400. We grew up the children of a United Airlines employee and I worked for them briefly after high school, so we have a strong emotional connection to the airline, despite everything it does to try and ruin the travel experience. 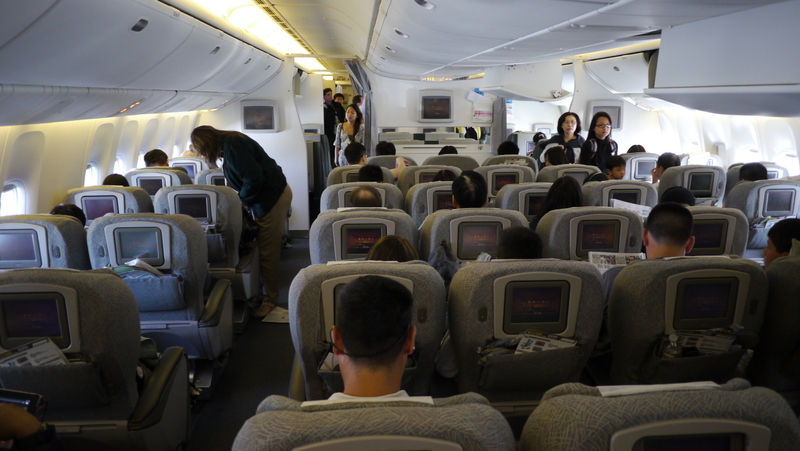 Our “Elite Class” (premium economy) cabin for the EVA Airways flight from San Francisco to Taipei. Since it was a daylight departure, I gave Jenn and Kevin the window seats so they could enjoy the view as we climbed out of San Francisco.