“Soi” is a commonly used word in Thailand. It roughly translates as “alley” and Bangkok is filled with these small lanes that feed off larger arterial roads like so many strands of narrow rice noodles in a bowl of guaytiaw. It is on these sois that some of the most interesting sights lie, away from the main thoroughfares and amidst the everyday lives of locals.

One Friday afternoon not too long ago, I had to go from Soi Convent, a pretty large street that connects Silom and Sathorn roads, to the Narathiwat intersection. Traffic was gridlocked on the main streets so I decided to walk. Instead of walking along the main road and inhaling the fumes of idling vehicles, I took a shortcut along Soi Phipat 2. 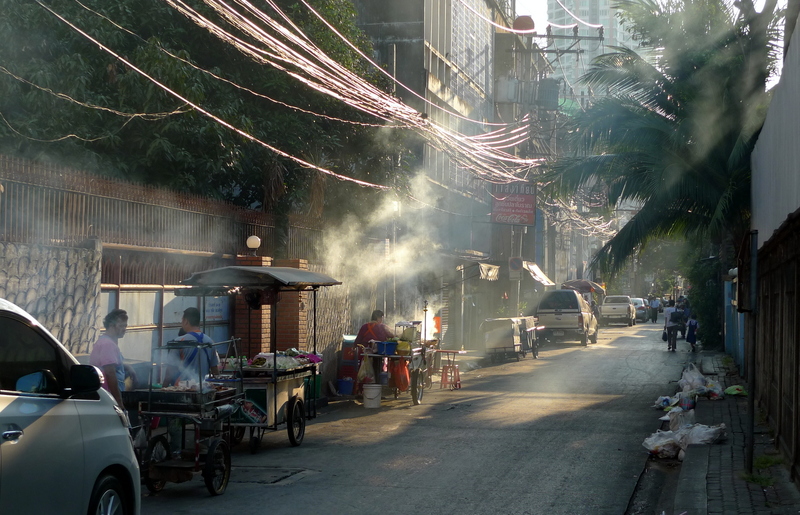 This narrow soi connects from Convent to Narathiwat and passes all sorts of houses, shops, condos, and hotels. It is an older neighborhood, one that predates most of the buildings in this otherwise modern corner of the city. In the late afternoon, numerous vendors were setting up their carts. Smoke from freshly-started grills rose in thick clouds through which the sunlight sliced. The smell of charring chicken and pork made my stomach growl as I tried to hurry past so as to not arrive at my destination smelling too much of smoke.

Midway down the soi, I saw a large sign warning in Thai and English to beware of pick-pockets and bag-snatchers. I’ve been warned before that this soi, despite being in a very populated area adjacent to the main business district, is known for its risk of theft. Once, a year or so ago, I was walking down the street one afternoon and a Thai man was just standing by the side of the road in the shade. As I passed, he called out to me in English to be careful and watch out for pick-pockets. He then drew back his jacket so I could see the handle of a gun sticking out of the waistband of his pants. Very strange.

All the more strange because Bangkok isn’t a city in which I ever have any fear of crime. Sure, it happens here, but I don’t worry about it the same way I might when I’m in the US.

Anyhow, this afternoon I passed through Soi Phipat 2 with no incidents and arrived a few minutes later at my destination, a little sweaty and a little smoky but none the worse for wear.