While only in Los Angeles for a few hours between flights, it was time enough for my cousin Jackie and me to join Gary and William for dinner at Lukshon , a small plates restaurant in Culver City where chef Sang Yoon turns out clever takes on food from across east Asia with precision and, for the most part, a lot of flavor. 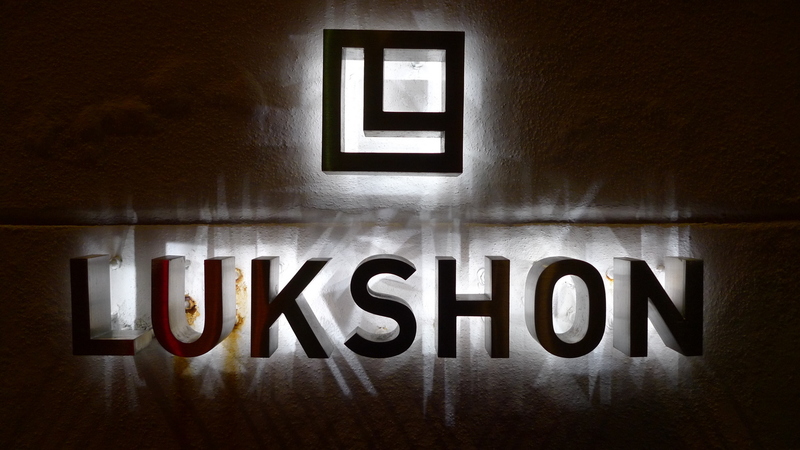 Lukshon is located in the Helms Bakery complex between Washington and Venice boulevards, just a few doors down from the chef’s other restaurant, Father’s Office.  Jackie and I arrived on a Tuesday evening about 6:00, just as the restaurant was opening for business.  Some corporate function was being set up on the outdoor patio and the two of us were the first customers into the restaurant. 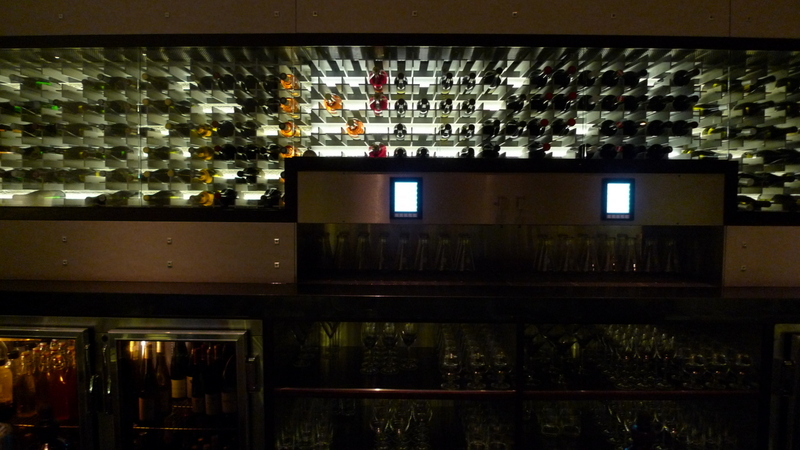 We sat down at the bar to enjoy a drink while waiting for Gary and William to join.  The bartender was an affable man who displayed a stunning breadth of knowledge about the wines and the cocktails on the menu.  There is an elaborate machine in place for dispensing wines, a restaurant owner’s dream in terms of portion control I suppose.  The nice thing was that we could get tastes of several wines before selecting one we wanted to order. 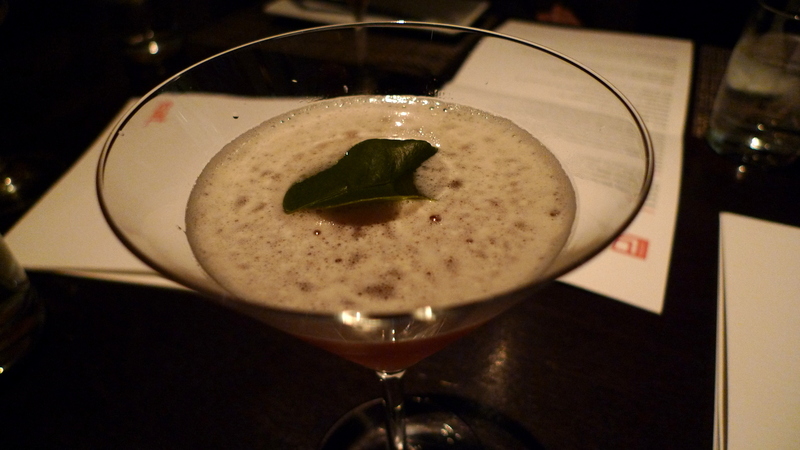 Over dinner, I tried one of the restaurant’s signature cocktails, the Yokohama Romance.  It features Prunier VSOP cognac, cherry heering (a Danish cherry liqueur), kaffir lime, lemongrass, and shaoxing wine.  What caught my attention was that while Jackie and I sat at the bar enjoying our wine, the bartender was preparing this drink in front of us.  The last garnish is the kaffir lime leaf, which he placed in the palm of his hand then smacked with the other hand.  This bruised the leaf, immediately releasing the very pleasant aroma.  Intrigued, I ordered one over dinner and found it to be enjoyable and complex in the way a cocktail should be. 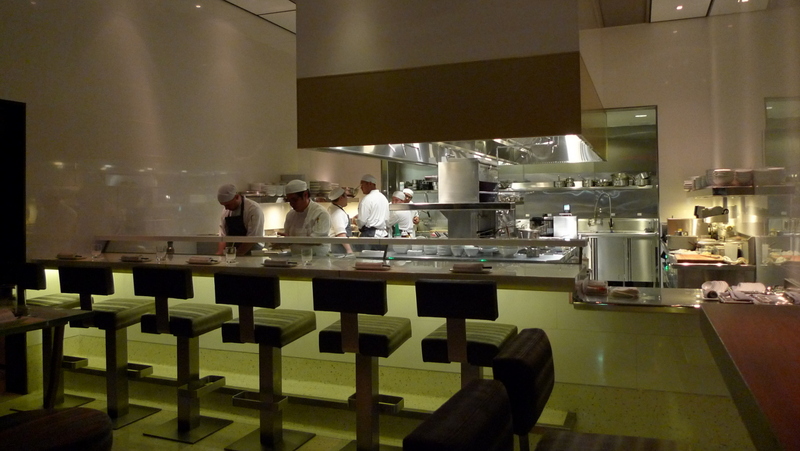 There are two parts to the dining room: a brighter space featuring the bar, some long tables, and the clean and modern open kitchen.  The other part of the dining room is more intimate, with tables and banquettes set among a cozier ambience.

The menu, as the bartender explained it to us, is intended to be a journey through eastern and southeastern Asia, tracing the paths that various ingredients, techniques, and dishes have taken across the region thanks to migration and trade.  As an example, I’ve written before about northern Thai style curried noodles that owe much to a Muslim region of southwestern China.  Chef Sang Yoon plays with these culinary ethnographies.

Gary and William joined us soon after and we moved to the table, where they used their experience from previous visits to help guide us through the menu.  The menu is composed of about 20 small plates, 3 noodle dishes, and 5 rice dishes.  Everything is served family style which means that it is placed in the middle of the table for sharing by all diners.  Here’s what we enjoyed: 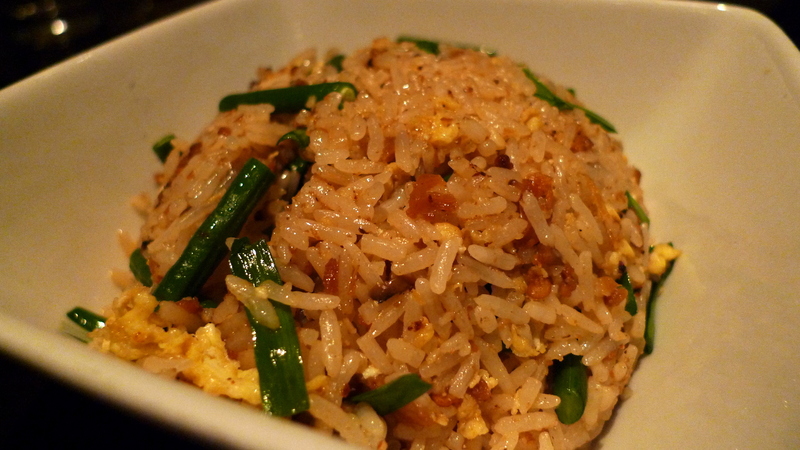 Choosing a rice dish was a challenge as they all sounded good.  We settled on XO rice, which is jasmine rice stir fried with XO sauce, long beans and scrambled egg.  XO sauce is a sauce made of seafood, usually scallops, and chilies that is somewhat similar to Worcestershire sauce.  Only “somewhat,” though.  This was a pleasant dish but odd that it arrived first since fried rice is usually more of a concluding dish.  The portion was modest, though, so no worries about us filling up on it. 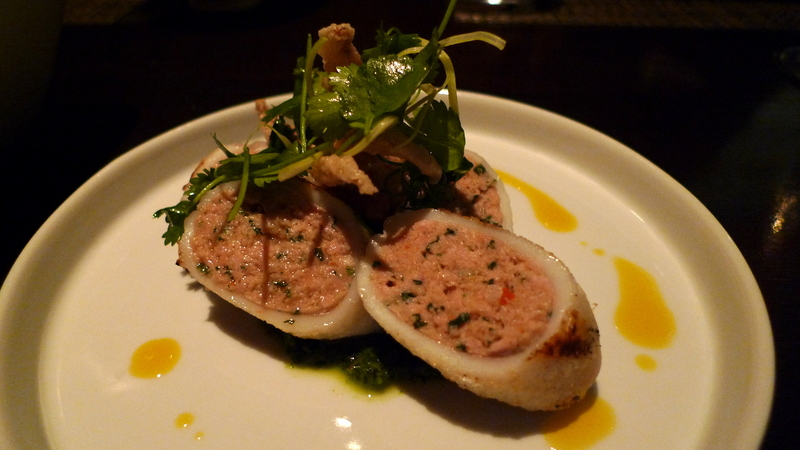 The baby Monterey squid stuffed with Chiang Mai style pork sausage, candlenut, mint, and rau ram.  This dish was technically well-made but didn’t inspire me as much as I had hoped.  The squid was fresh and not too chewy.  The pork sausage was a less common variety using fermented pork.  The candlenut and rau ram provided nice flavors.  Each component was solid but when the flavors came together I found it interesting but didn’t long for another bite of it. 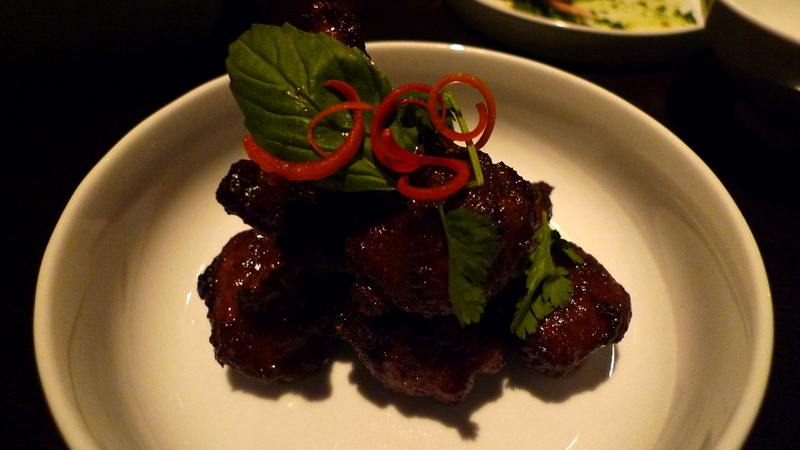 A stand-out dish (one also mentioned by many professional reviewers) is the spicy chicken pops.  These feature chicken drumettes cooked in a sauce of garlic, kecap manis, and Szechuan pepper.  Think Asian style buffalo wings. Kecap manis is an Indonesian style sweet soy sauce.  Szechuan pepper, which is not related to black pepper or to chili peppers, has a mild numbing effect on the tongue and, in larger quantities, the lips.  This was a dish for which I could have done something very un-family style: hogged the entire plate. 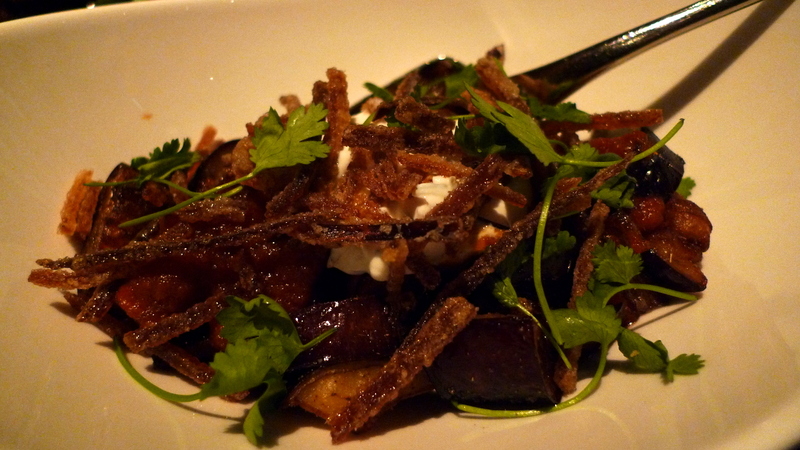 Another interesting dish was the Chinese eggplant, which was braised with tomato sambal (a chili sauce) and served with fennel raita (a kind of yogurt sauce) and eggplant “fries.”  It was a very satisfying dish, comfort food that seemed very appropriate given the cool weather LA was having that evening. 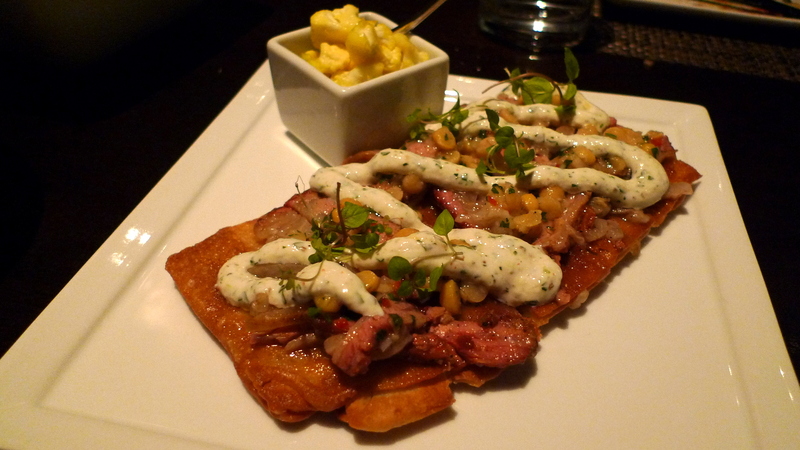 Our next dish was a lamb belly roti canai.  Roti canai is a flatbread with Indian roots that is common in Indonesia and Malaysia.  Here the tender lamb belly is served with chana dal (split peas), cumin, mint, and pickled cauliflower and topped with a raita (yogurt) sauce.  This had a lot of pleasing flavors and was also very enjoyable. 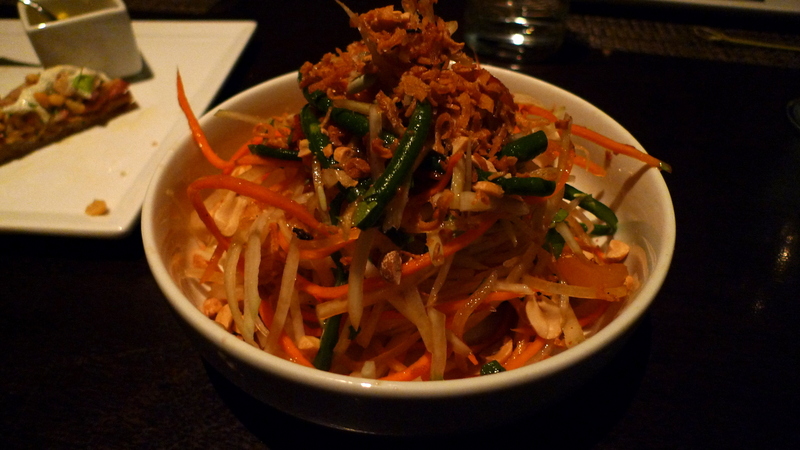 The next dish to arrive was som tam, the Thai green papaya salad.  Made with a lot of carrots and only a bit of green papaya, the dish also had cherry tomatoes, long beans, peanuts, crispy shallots and fish sauce.  Now, maybe I’m a bit biased because I live in Thailand and received this dish with certain expectations, but my thought was that it was a poor representation of som tam.  Not only was the kitchen stingy with the green papayas, but the dressing was very one-note.  Normally, you have a combination of sweet, salty, umami, and acidic all in one dish.  Here it was mostly sweet. 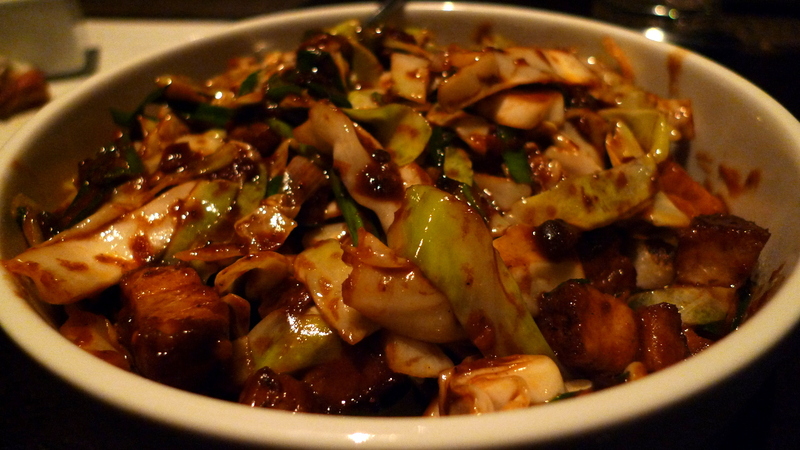 The next dish was garlic pork belly, stir fried with do ban jiang (a Chinese style paste made of fermented beans, usually soy or broad beans, and often with chilies), small nuggets of mochi (glutinous rice cake), cabbage, and garlic chives.  This was another comforting dish with lots of full bodied flavors and some interesting textures (still crisp cabbage, chewy mochi).  Serve this with a bowl of rice and you’d have a nice meal just by itself. 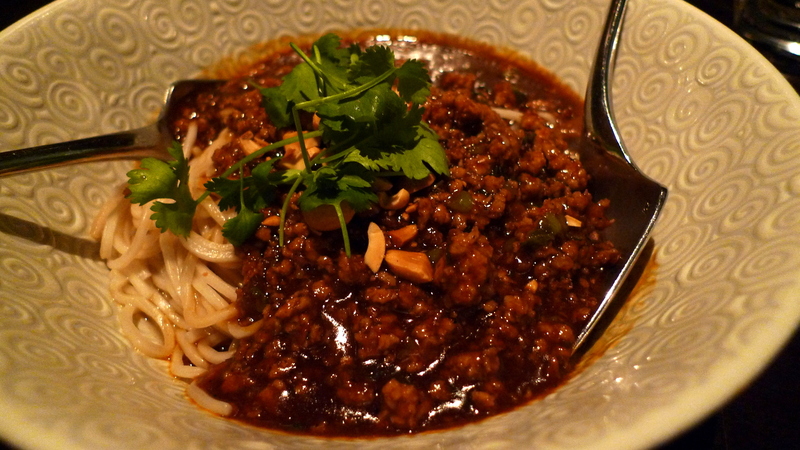 Our final dish was dan dan noodles, a Szechuan classic that features a spicy sauce made of preserved mustard greens, chili oil, Szechuan pepper, and minced pork.  Think spaghetti with meat sauce done Chinese style.  While I’m no expert, this version of dan dan noodles was very similar to what I’ve had at other restaurants, reminding me especially of a version I had in Taipei at Kiki Restaurant with Andy and his parents. 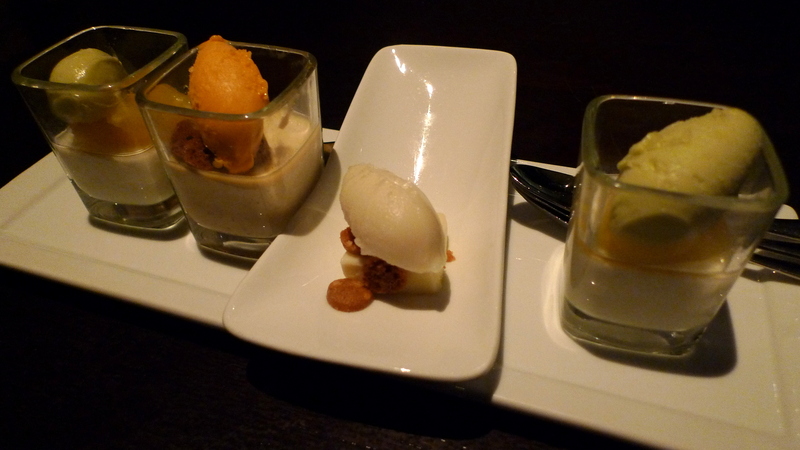 Dinner concluded with a plate of complimentary desserts, three types, each with small portions.  I don’t recall specifically what they were, something like custards with sorbet on top, all of which featured Asian flavors.  While I didn’t write down the details, I do recall that they were flavorful and at just two or three bites each, were a satisfying end to a pleasant meal.

All in all, I found Lukshon to be a meal that was not only tasty and reasonably priced (about $30/each including a drink) but mentally engaging, too.  Add to that the pleasant company with whom I dined, and it was a memorable meal with which to end my visit to the United States.

0 thoughts on “Dining in LA: Lukshon”