Now that I’m safely back in Thailand, let me share some highlights from my recent trip to the United States.  This first portion covers the trip from Bangkok to Los Angeles and San Francisco on my way to Kansas City. 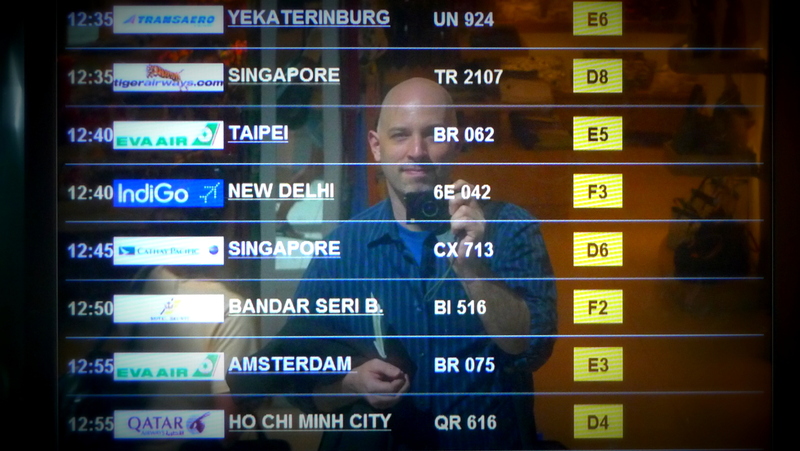 Self-portrait on the Flight Information Display Signage.  Thankfully, I scheduled a 12:40 pm departure which meant I didn’t have to get up too early or rush to get to the airport.  Instead, time for a leisurely breakfast before hailing a taxi. 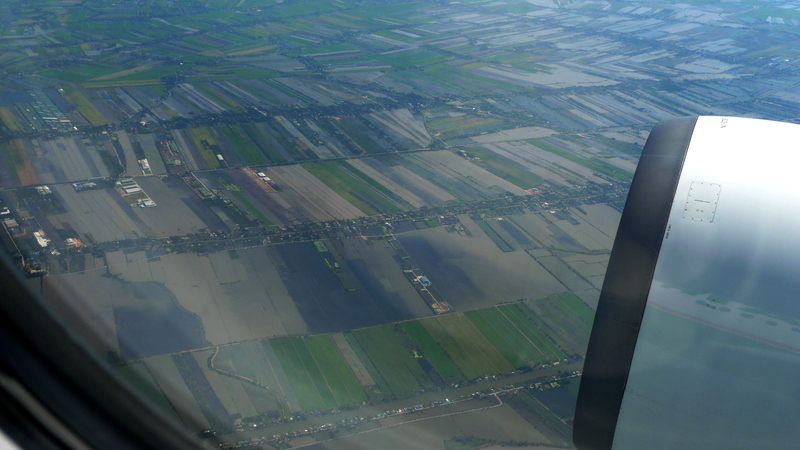 On the climb out of Bangkok, I could still see some lingering effects of the flooding.  While these rice paddies normally have water in them at this time of year, you can see how the vertical boundaries between many of the paddies have been erased.  The water is still high enough in this area to the northeast of the city that water flows across dikes and roads, combining multiple paddies into small lakes. 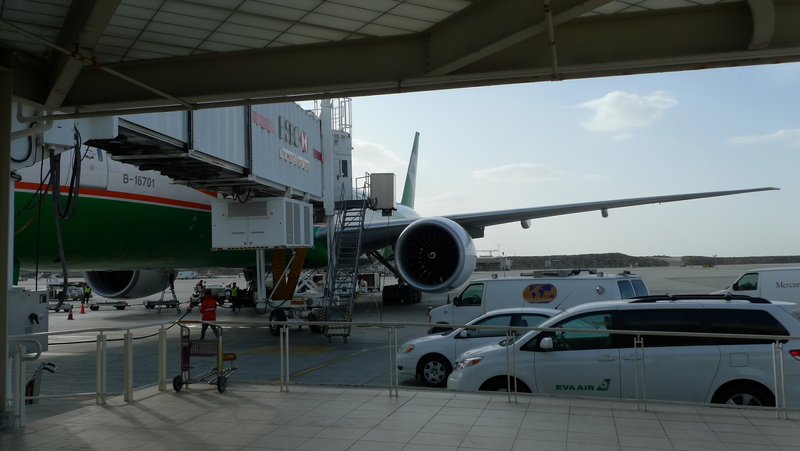 The connection through Taipei was smooth and we landed about thirty minutes early in Los Angeles in the mid-afternoon.  Here, I snap a photo of my plane before boarding a bus at the remote parking area.  Winds were very high and were blowing offshore, the opposite of the usual direction. 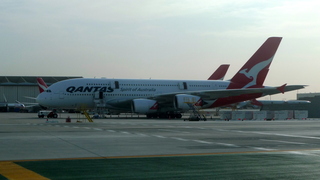 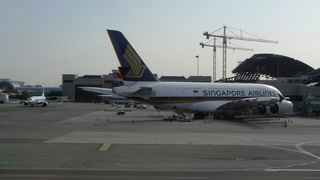 Los Angeles is a great place to see the world’s largest passenger airplane, the Airbus A380.  Qantas sends multiple planes there daily, one of which is hidden behind the other in the picture on the left.  Singapore Airlines also sends an A380 to LAX (above right) and Korean Airlines and Air France will soon join them, too. 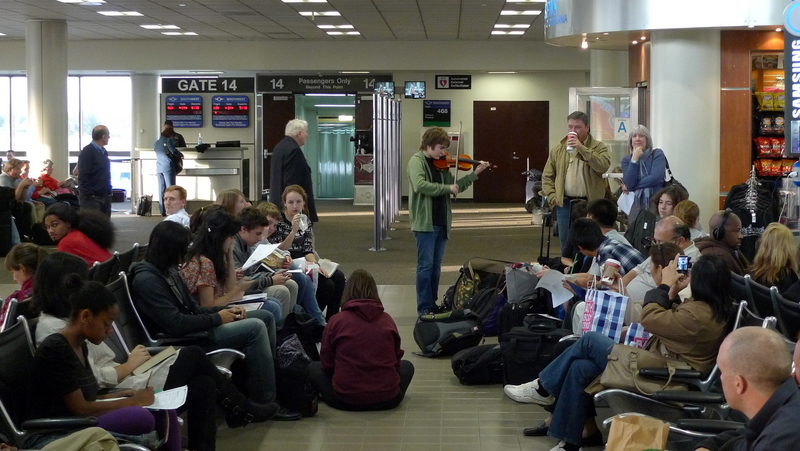 I connected to Southwest Airlines for a flight up to San Francisco.  Had I realized that my 6:00 departure was going to be delayed, I would have hustled over from the international terminal and tried to make the 3:30 flight instead.  While waiting for my flight, a teenager practiced his violin, playing very well for an appreciative crowd of passengers. 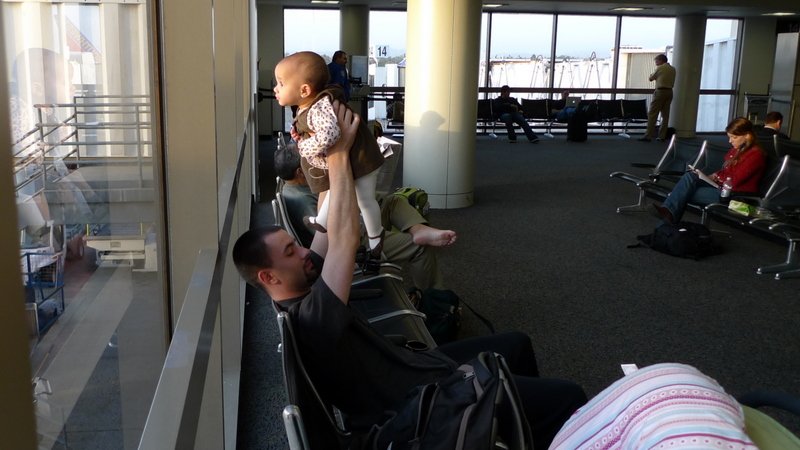 A young girl gets her start as an aviation enthusiast, watching the planes as her father “flies” her through the air. 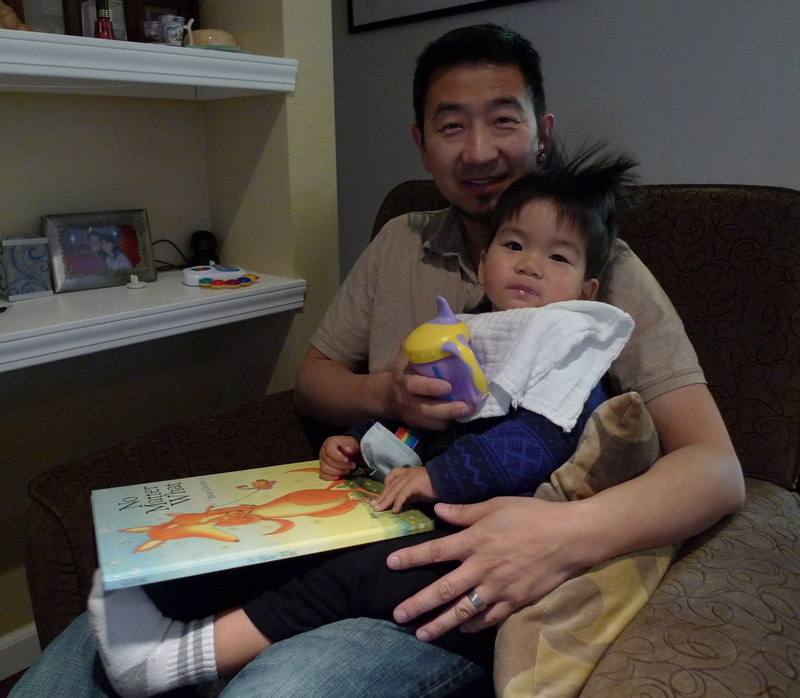 My high school friend Ryan, pictured above with his 2-year old son, picked me up at the airport and we were able to catch up over dinner – Vietnamese noodles! – before I crashed on an air mattress at his house.  While I was only in the San Francisco area for about 12 hours, it was very nice to be able to see Ryan and his family again. 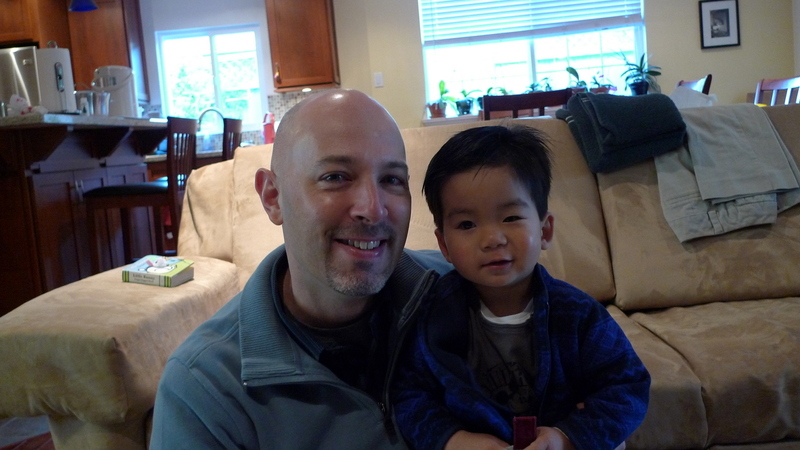 After some coaxing, Elliot decided it would be okay to pose for a picture with Uncle Chris before heading to the airport. 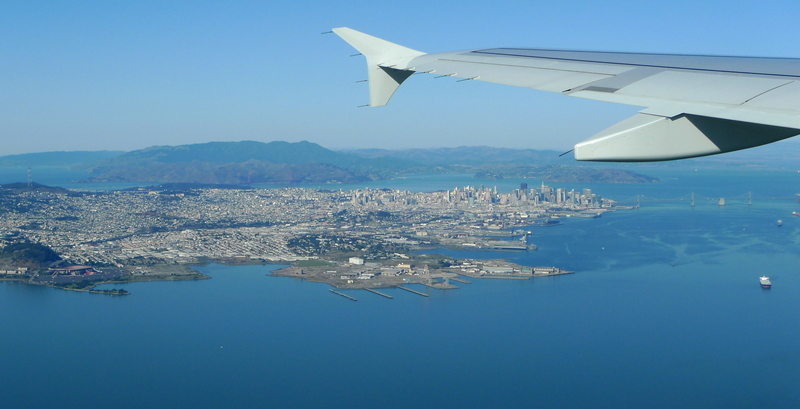 The weather on Friday morning was crisp and clear, allowing for a beautiful view of San Francisco as we took off to the north, climbing towards Oakland. 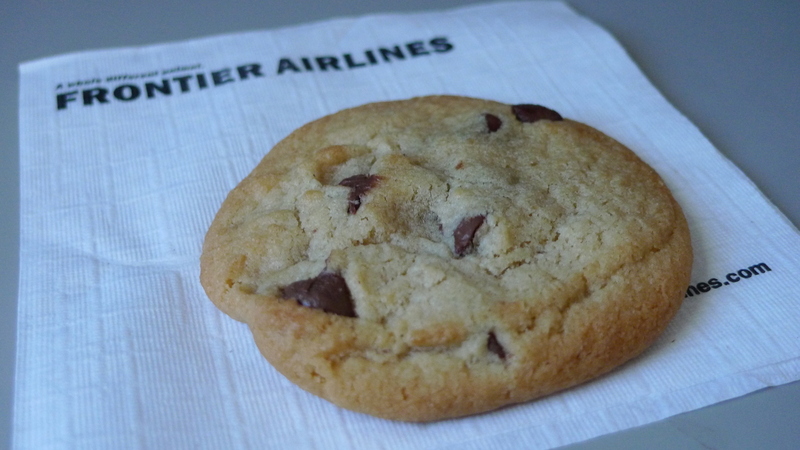 After buying Midwest Airlines, Frontier adopted their practice of serving fresh-baked chocolate chip cookies onboard.  A nice touch at an airline that is hard to distinguish from all the other domestic carriers.  After a tight connection in Denver, I arrived in Kansas City about 5:45 Friday evening.

0 thoughts on “On the Way to Kansas City”