One commenter on my previous entry about making sausage expressed surprise about sausage being a part of Thai cuisine. Sure enough, Thais like stuffed intestines just as much as about everyone else! After posting the entry, though, I learned from a friend about a unique Thai sausage used as an ingredient in a clear soup. The sausage is called “look rok”. 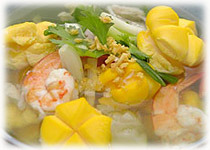 It is made by filling sausage casings (intestines) with uncooked, well-beaten chicken eggs. Then you boil the sausage until the egg firms up. The sausage is then sliced and, if you want to be decorative, the cut ends are scored into quarters. The pieces are added to a clear broth that has minced pork and whole shrimp added to it. Looks quite pretty, doesn’t it? Seems like a lot of work, though, for just one ingredient in the dish.