A picture posted by my cousin Jane was all it took to inspire me to try making taco salad at home.  But something I didn’t want to deal with was deep frying tortillas to make the taco bowls.  Not only does deep frying add a lot of fat (and, thus, heaviness) to the meal, but it is also more work than I want to deal with.  The key was finding an easier, lower fat way to make the taco bowls. 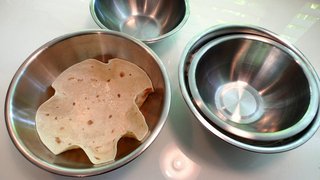 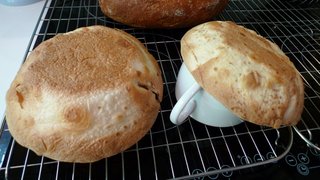 After some searching on the internet, I found two techniques for baking taco bowls that sounded promising.  The first involved spraying a tortilla with cooking spray (Pam, Crisco, or another brand).  The second technique involved pouring a tablespoon or so of oil on top of about an inch of water in a large container such as a roasting tray and then dipping the tortillas into the water.  Regardless of which method you used, you then shaped the tortilla between two oven proof bowls and baked for about five minutes in a 400 F oven.  Ofter that, you remove from the bowls and bake the bowls another five minutes until crisp.

Both techniques work well, although if you are going to spray the tortilla you need to be careful about overdoing it.  It also works better if your tortillas are at room temperature or even zapped in the microwave for a few seconds before trying to shape them, otherwise they may crack or tear.  The flavor of the baked bowls was very enjoyable, albeit less oily than with the fried bowls. 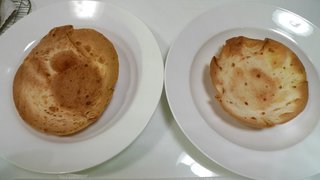 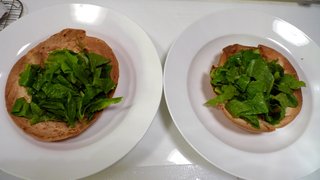 As for ingredients, you could use whatever suits your budget, sense of taste, and amount of prep time.  I used chopped romaine lettuce for a base, although mixing in some spinach or other greens would have been a nice alternative. 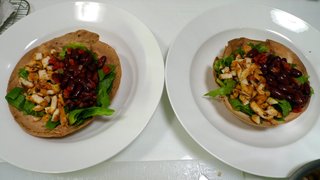 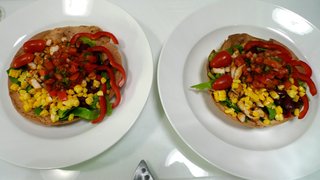 To the lettuce I added chicken and beans.  The chicken had been marinated in a coconut chili sauce that I had handy, although simply sprinkling the chicken with some salt, pepper, and cumin and pan frying would have been fine, too.  For the beans, I drained a can of kidney beans (no black beans were available at the store), then cooked them for just a few minutes with some chopped onion and chopped red bell pepper.

On top of the protein, I aded freshly boiled corn, chopped tomatoes, and some more red bell pepper.  For a dressing, I used homemade tomato salsa, although if it were the right season, some homemade mango salsa would have been spectacular. 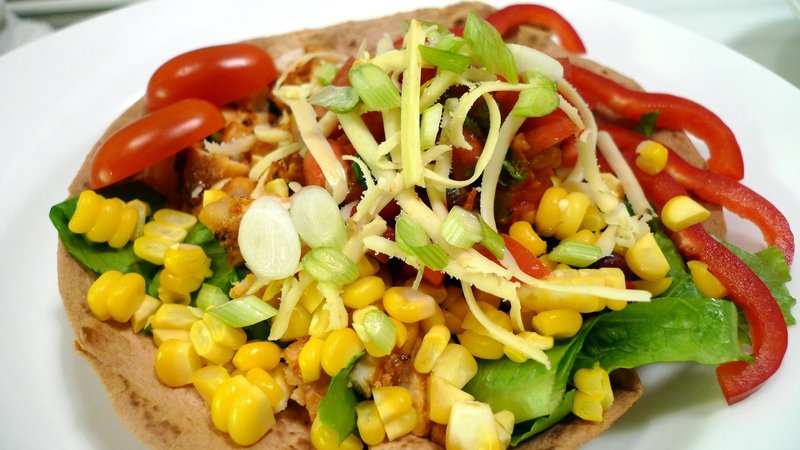 Garnished with some shredded pepper jack cheese and sliced green onions, these taco salads made for a healthy and tasty treat.  Many thanks to Jane for inspiring me.