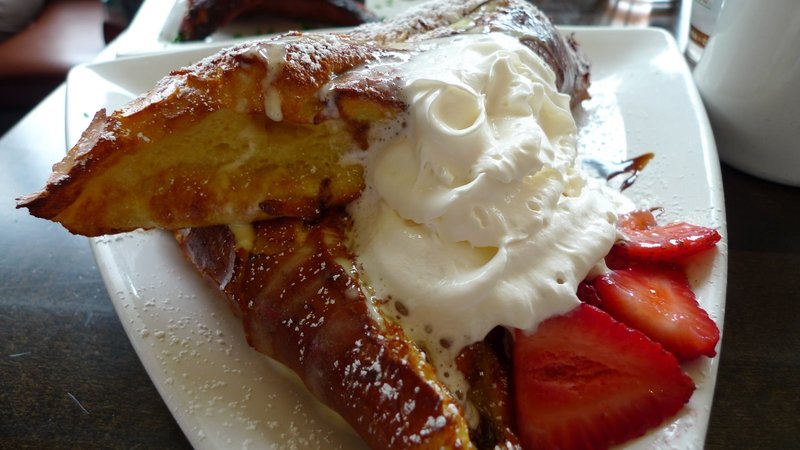 Back in June we enjoyed a tasty breakfast at Starling Diner in Long Beach.  They serve this amazing dish called San Francisco Stuffed French Toast, which is a baguette filled with mascarpone cheese, dipped in creme anglaise, and broiled – not fried! – until golden and crisp.  (Full entry about that meal here.)  Ever since that visit, I’ve been curious to try making that dish, just to see if I can understand its mechanics.

Finding myself with an extra half of a baguette last week, I turned to the internet for potential recipes.  While there wasn’t an exact recipe, I was able to piece together a few recipes to guide me.  I had to resolve three key issues: make a creme anglaise, create a tasty mascarpone cheese filling, and then figure out how to construct and cook the baguette so it came out with a crispy exterior and moist but cooked interior. 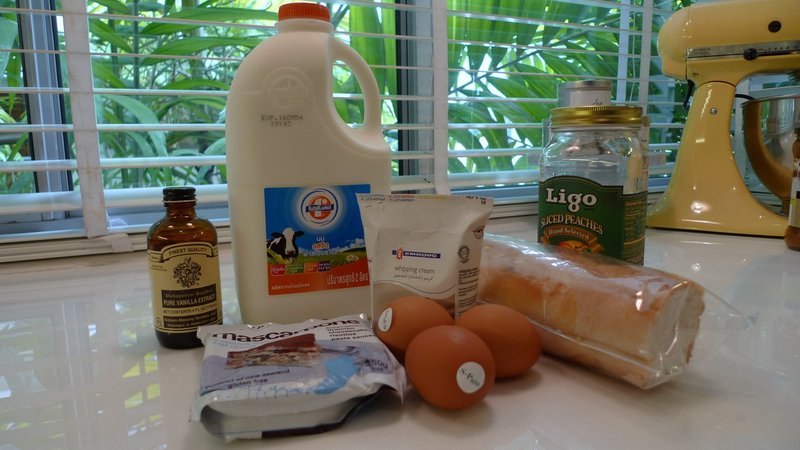 The ingredients were pretty simple: a slightly stale baguette, mascarpone cheese, milk, cream, egg yolks, and vanilla, and some fruit to serve on the side. 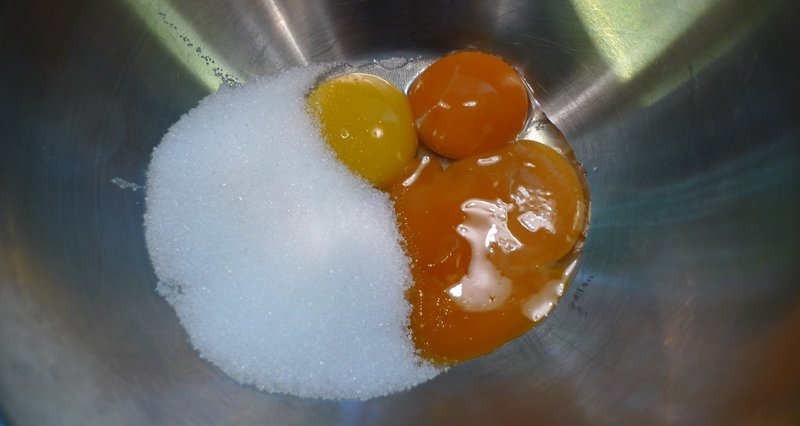 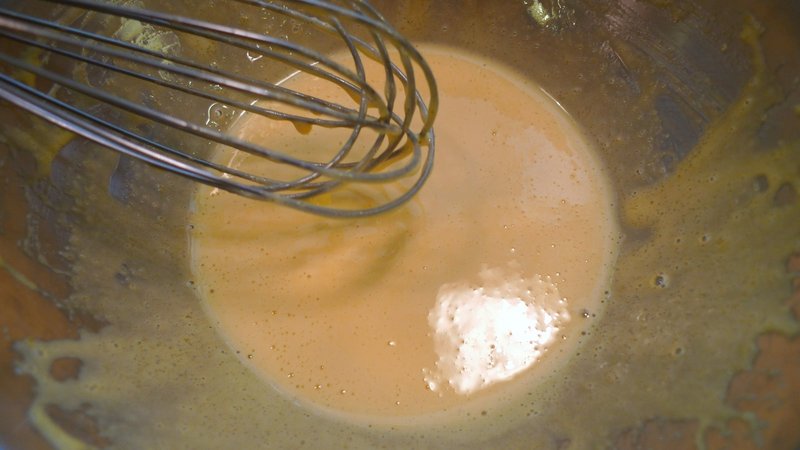 A creme anglaise is basically a custard sauce.  In and of itself, it isn’t terribly complicated, although I suspect that my technique would improve if I had more experience making it.  I whisked three tablespoons of sugar into three egg yolks until pale yellow.  Ideally, you would use ultra-fine sugar rather than regular granulated sugar, to make it easier for the sugar to dissolve. 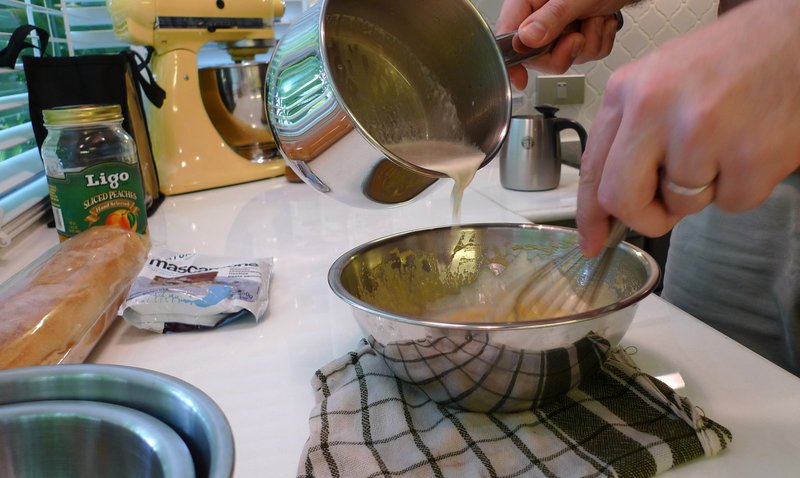 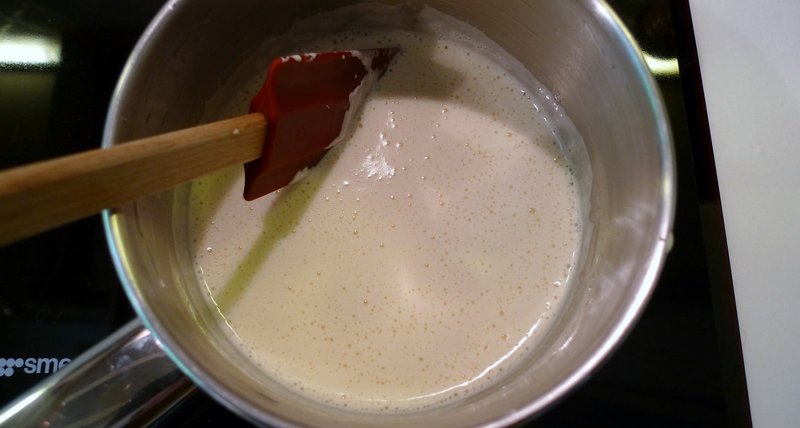 Next, you heat a mixture of half cream and half milk until it is not quite to the point of boiling.  Then, pour the milk into the egg mixture slowly, whisking constantly so the eggs do not scramble.  The mixture is then returned to the stove and cooked gently (stirring constantly) until it reaches 160 F. It can then be strained through a wire mesh to remove any clumped bits of egg and then allowed to cool. 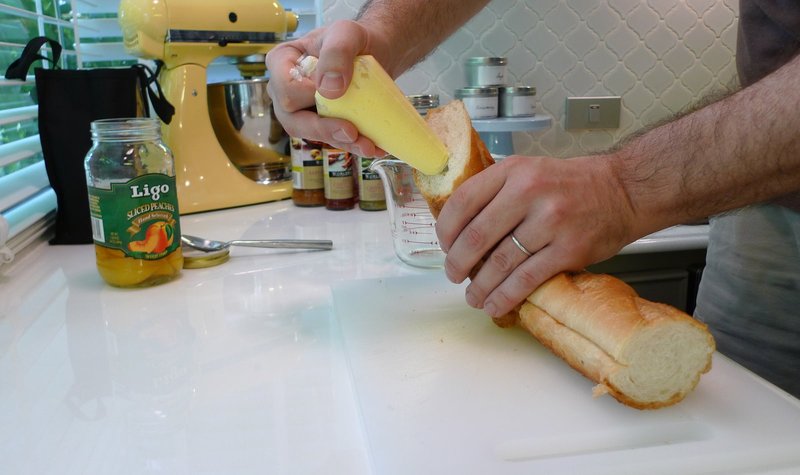 While the creme anglaise cooled, I whipped the mascarpone cheese with a little sugar, a tablespoon of juice from some canned peaches, and a pinch of salt.  Something about that caused it to coagulate a bit, so next time maybe I’ll just stick with a splash of honey and leave the salt out.

The big challenge was figuring out how to stuff the baguette.  Slicing it open seemed problematic as the cheese would easily ooze out while cooking.  I tried sticking a serrated knife into one end of the bread, cutting a small pocket.  Then, I piped the mascarpone mixture into the bread.  All in all, this worked fairly well although it makes the dish a little more complex and dirties a few more kitchen implements. 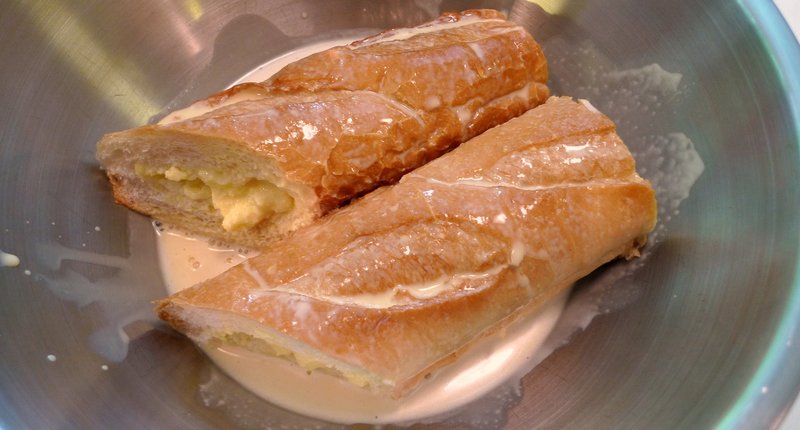 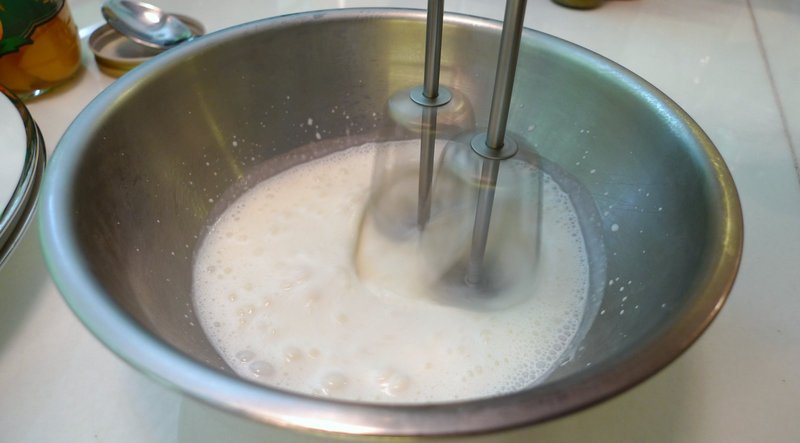 While the bread broiled, I whipped a little cream to use as a condiment.  You could also prepare any fresh fruit – berries, bananas, peaches, etc. – to go with the dish.  I opted for canned peaches as I had a jar open in the refrigerator. 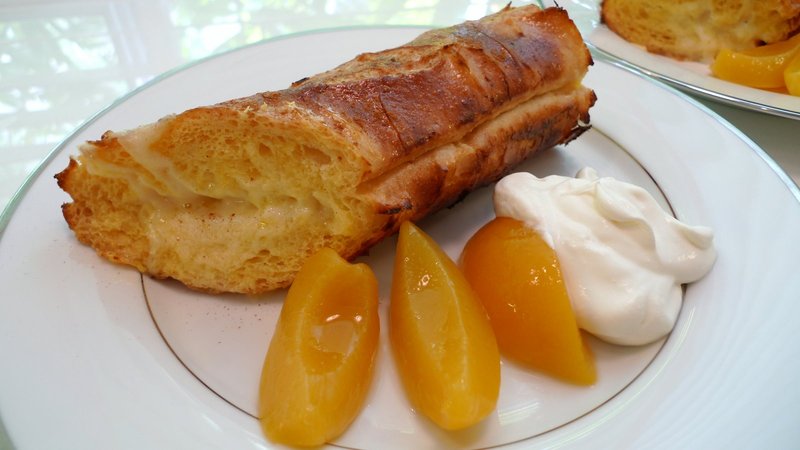 The finished product.  The mascarpone filling melted, which I recall being the case with the original, and gave the interior a rich sweetness.  The outside was crispy, although I’m not sure the baguette was really stale enough to get the right texture; it was still a little soft when I started this process and not as dry as would probably be best.  All in all, I think it turned out nicely and would be worth playing around with a bit more.  However, it definitely takes more effort than other versions of French toast I’ve had!

0 thoughts on “An Attempt at San Francisco Stuffed French Toast”