After twelve hours preparing a multi-course small plates meal for a dozen guests, it was finally time to sit down and taste the fruits of our (and Nat’s staff’s) labors. 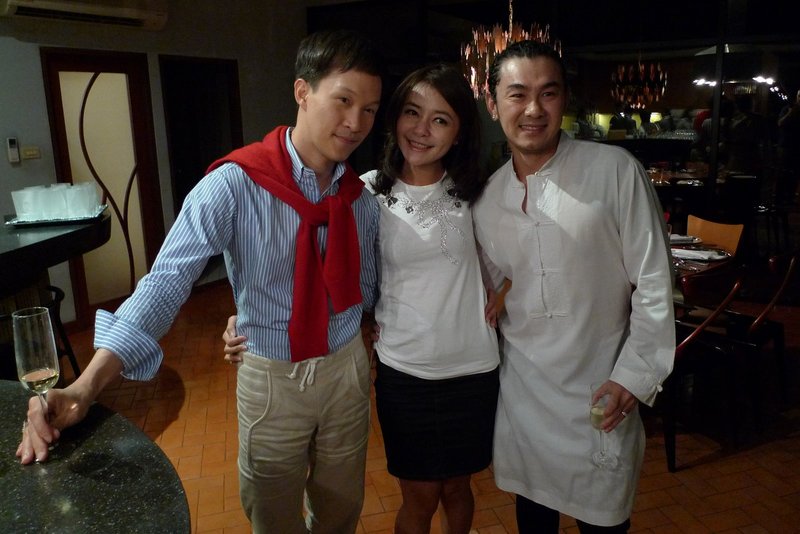 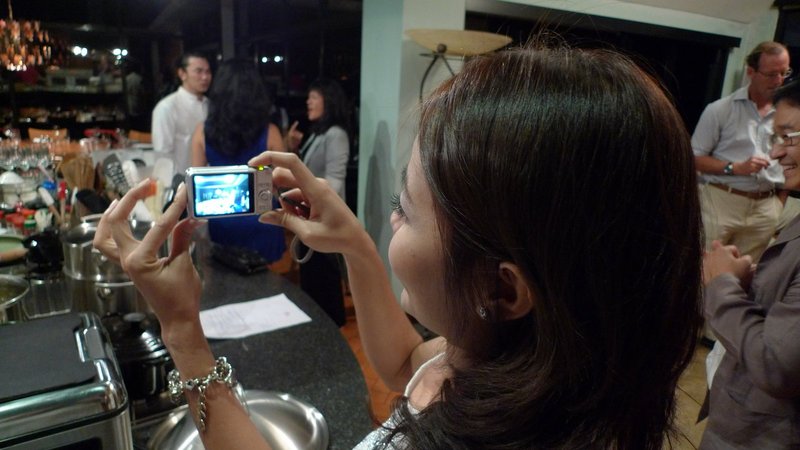 Left – Tawn, Bee, and Cha pose for a picture.  Right – Bee takes a picture of the party.

The guests were a combination of my friends, Nat’s friends, and several people we know in common.  With a total of thirteen people, there was enough variety of experiences, perspectives, and opinions while having a small enough group to not be overwhelming.  I must compliment Nat’s job at arranging the seating as everyone was strategically placed to maximize the interesting conversations.

What follows is an overview of the menu that was finally served, as well as commentary on some of the last minute changes that had to happen!  I’ll also critique the dishes, as I think an important part of any culinary undertaking is, in addition to enjoying the food, to learn from the experience. 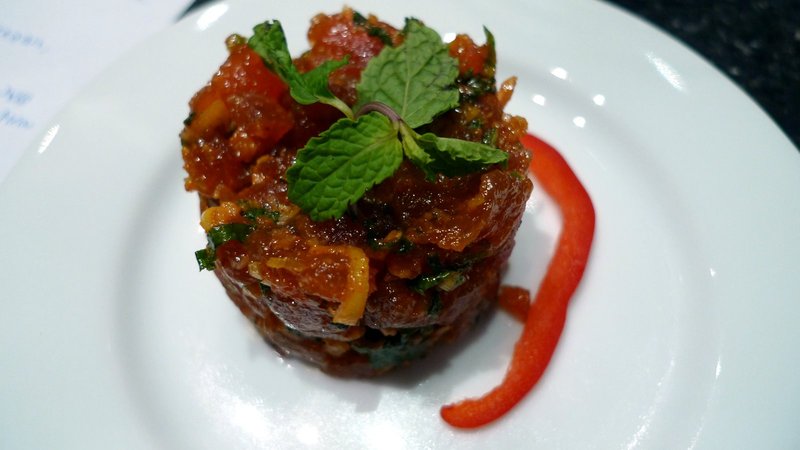 Amuse bouche: Thai-style poke – A mixture of sushi grade yellow fin tuna seasoned with lemongrass, kaffir lime zest, mint leaves, fish sauce, and tamarind paste.  While I think this turned out nicely, I have other ideas about how it should be made, based on a dish I had at lunch the next day at a Thai restaurant.  You’ll be seeing this “Thai-style poke” concept appearing again in this blog as I refine it.  We also managed to veer off the “small plates” course from the very first dish – this serving was about ten bites, when it should have been just two or three. 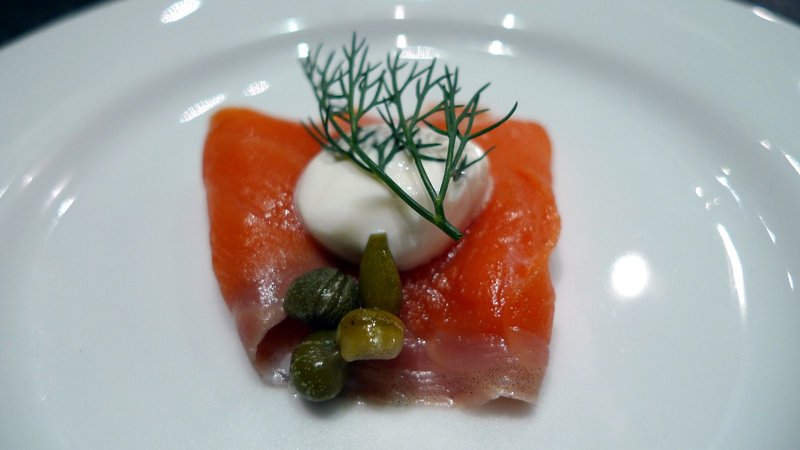 Alternate amuse bouche for one of our guests who does not eat raw meat: a slice of smoked salmon with sour cream, dill, and capers.  This was pulled together at the last minute as I didn’t realize we had a guest with dietary restrictions.  While not the most original thing to serve, I think it photographed very nicely. 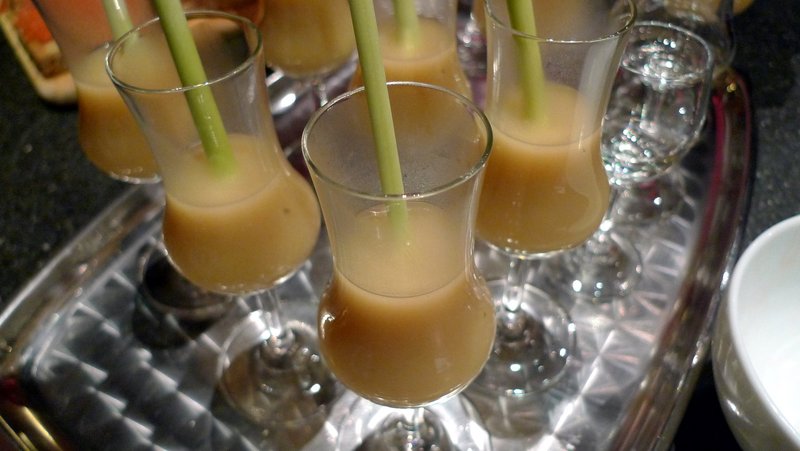 Hot Soup: We followed the poke with small glasses of a lemongrass Vichyssoise, a pureed potato and leek soup that had a fragrant lemongrass flavor.  This was very nice and was fun to drink.  It worked well both in terms of concept and execution. 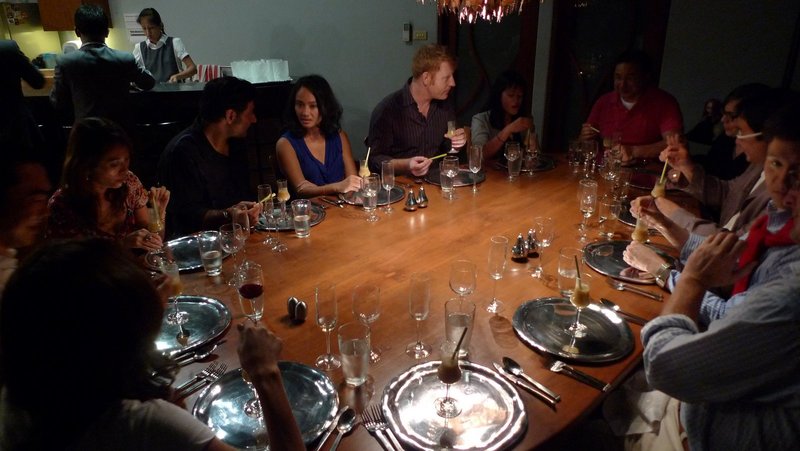 Dinner guests with their hot soup.  Several people were disappointed that the lemongrass garnish could not be used as a straw! 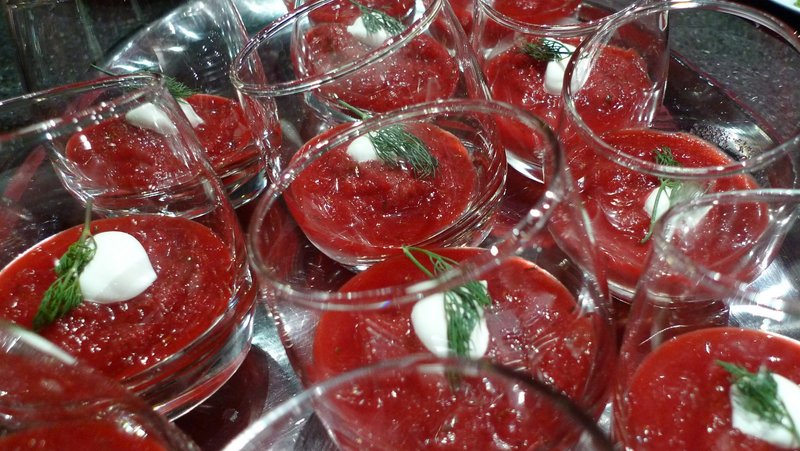 Cold Soup: Tomato and beetroot gazpacho, served icy with a dollop of sour cream and a sprig of dill.  In a moment of inspired improvisation (or, at least, what I think was improvisation), Nat explained that the guests were meant to stir this soup to mix in the sour cream, at which point it would have a drinkable consistency.  That worked pretty well.  The presentation was neat, the flavor was fine but nothing spectacular.  I think we should have started with raw beets and gone for something more borscht-like. 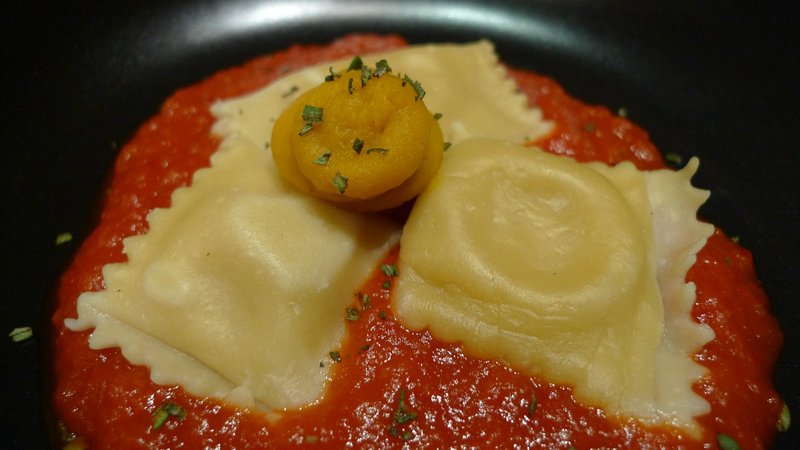 Pasta: Ravioli filled with pumpkin puree served on a bed of roasted red bell pepper sauce.  The staff ended up cooking the pasta some thirty minutes before we served the dish and then left it to cool in a strainer, which resulted in a pretty tough exterior.  The flavor of the filling, though, was very nice and the contrast with the pepper sauce was fantastic.  Next time, I think I need to make a dough that has some color in it, or maybe stipes, just for effect.  I’ll be making this at home sometime soon. 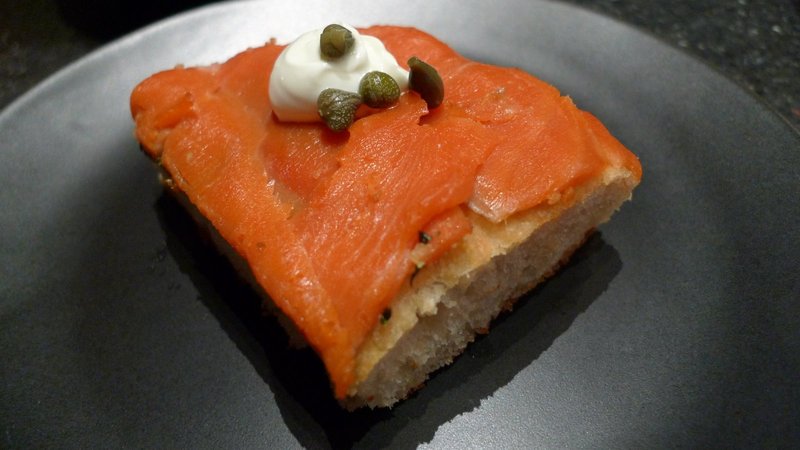 Fish: Smoked salmon served on top of a piece of shiso leaf focaccia, garnished with sour cream and capers.  Nat’s focaccia is fantastic and I have to get the recipe.  The shiso leaf added an interesting, and unexpected, flavor.  I think we could have doubled the number of shiso leaves, though, and cut the serving size in quarters.  This is another example of where we lost our focus on the idea of “small plates”.  Did I mention, though, that the bread was amazing? 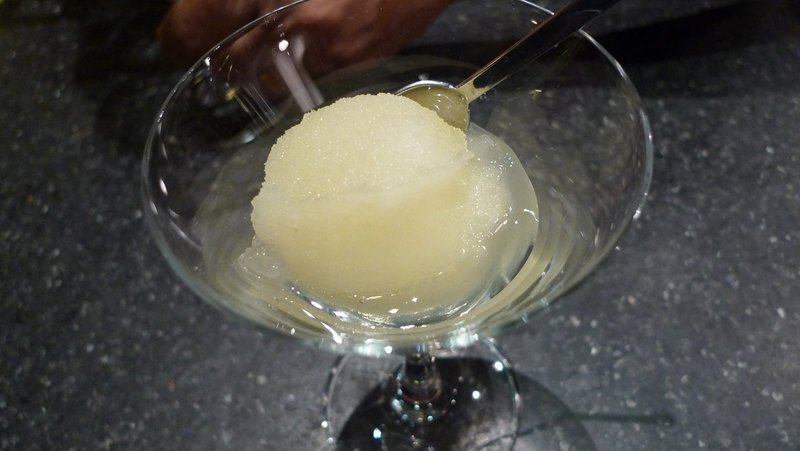 Palette Cleanser: To clean the palette after the smoked salmon, Nat served a scoop of a special sorbet.  We asked the guests to guess what flavoring was used in addition to the lime juice.  This was actually something he and I had tried first thing after I got there in the morning, settling on lime juice and Frangelico, a hazlenut-based liqueur.  The combination was really nice and very surprising.  If only I had room in my kitchen for an ice cream maker, the idea of serving a palette cleanser midway through the meal is very sophisticated. 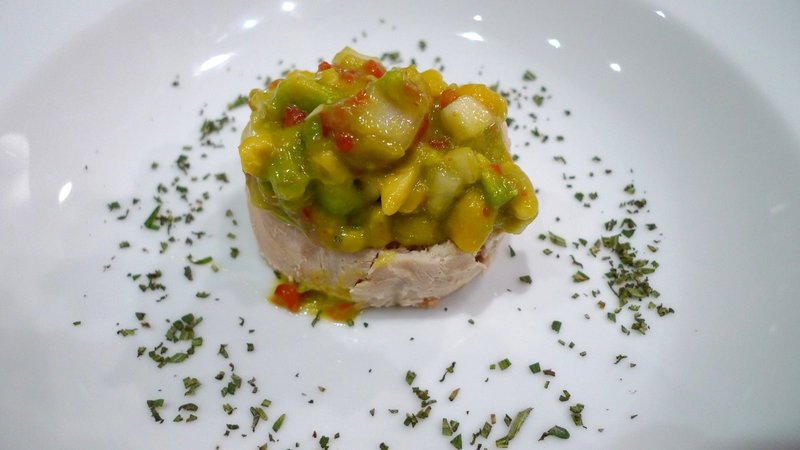 Fowl: The sous-vide chicken breast stuffed with a shrimp and ground pork mixture, served with mango-avocado salsa.  This dish underwhelmed me on a couple of levels.  The shrimp-pork stuffing tasted very good in the morning – we fried some up just to check the seasonings.  But after four hours cooking at a low temperature in the water bath, the flavor was more like pate.  The salsa was nice, but mixing it in advance led to the avocado breaking down, causing a creamy consistency.  I think it would have been nicer to have a salsa with very distinct ingredients.  All in all, this dish probably needs a rework before it is served again. 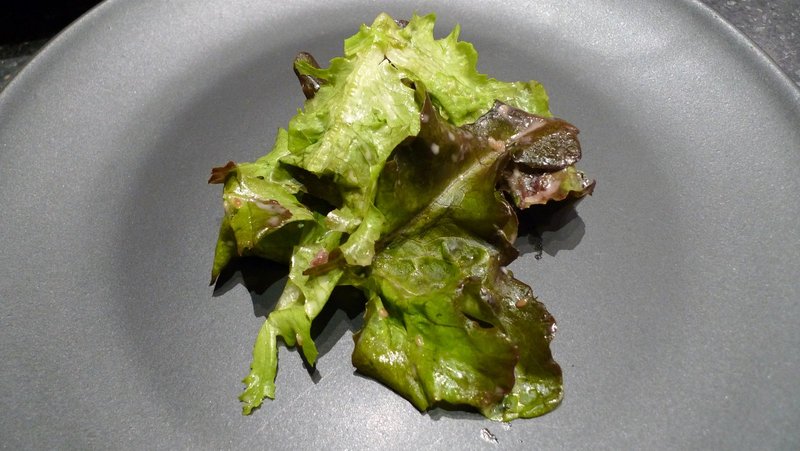 Salad: Simple mixed greens served with a light vinaigrette.  Nothing much to be said about this, although it could have used a cherry tomato, Parmessan crisp, or something to cheer up the plate. 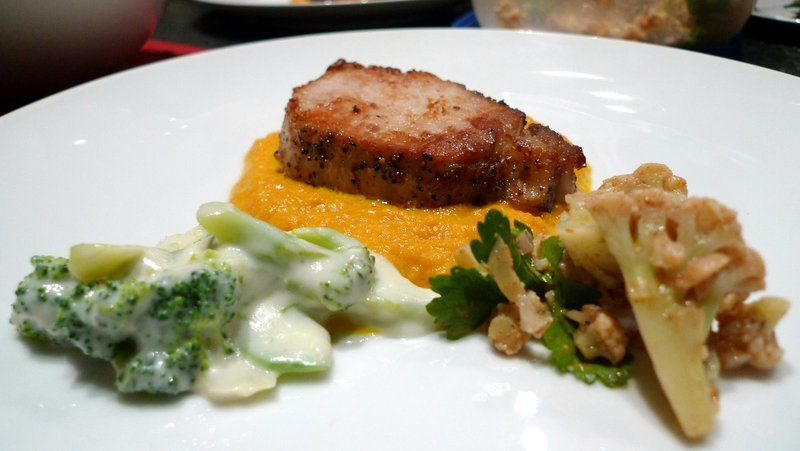 Meat and Veg: Pork loin, cooked sous-vide then pan-fried, served on a carrot puree with curried cauliflower and creamed broccoli.  I have to take the blame for this dish that ended up not being more than the sum of its parts.  Having not cooked sous-vide before, I underseasoned the pork loin.  It was very tender, which was nice, but didn’t have much flavor.  Originally, we had discussed slicing the pork then flouring and briefly deep-frying each slice, to give it a nice outer crust.  We changed our mind late in the game because trying to deep-fry a dozen pieces of pork (even with a staff to help) seemed like a lot of work.  In retrospect, I think that would have been a more successful approach than the pan frying.

As for the vegetables, we had a lack of focus and this is one place where some advance planning would have helped.  I made the cauliflower in advance, because I like the recipe, but the flavors didn’t have anything to do with the rest of the plate.  The creamed broccoli was meant to contrast with the cauliflower while having a similar shape, but it also evoked a bit of an “meh…” response on the taste buds.  The carrot puree, which we wanted to leave as a neutral canvas for the pork, could have used something other than salt and pepper to season.  A stronger flavor – cumin, maybe? – would have been nice.

At this point, we had served too many too-large “small” plates and guests were getting full.  It was at that point that we decided to skip the cheese course – sad, because we bought some nice cheeses! – and then the individual cranberry souffles were knocked off the menu because one of the kitchen staff mistook the souffle base for a sauce.  While in the kitchen plating another course, I looked at the stove and asked Nat, “Is the cranberry mixture meant to be boiling?”  The answer, of course, was no.  Scratch the souffles. 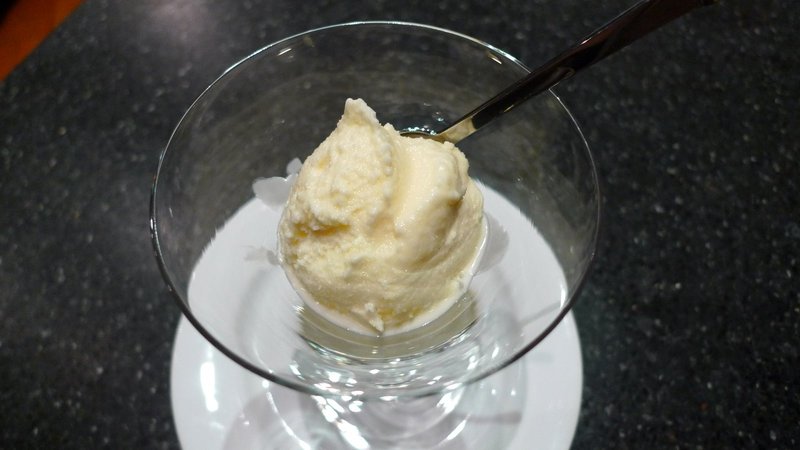 Dessert: Peppermint ice cream.  We were left with only the ice cream for dessert.  This was meant to be a rosemary ice cream but after an hour of the rosemary steeping in the cream mixture, the flavor was indistinguishable from vanilla.  Running out of time, we settled on peppermint, added the extract, and started freezing the ice cream.  The flavor was perfectly nice and made a nice conclusion to the evening, though.

All in all, the diners had a fun time, enjoying good company and good food.  Nat and I had a fun adventure preparing this elaborate, even lavish, meal.  There were some successes as well as some mistakes, and plenty of lessons to be learned.  Nat probably put it best when he wrote in a text message to me the next morning, “I’ll be ready to do it again in about a year.”

0 thoughts on “Serving the Lavish Dinner”