On our final day in Chiang Mai, Tawn and I drove east of the city to search for Huen Jai Yong, a restaurant highly recommended by our hotel’s staff.  Four or five people around the front desk agreed that this was the restaurant locals went to when they wanted to eat good Northern Thai food.  In fact, the restaurant is known particularly for its Lamphun style cuisine.  Lamphun is the province directly to the southeast of Chiang Mai.

As I learned from Wikipedia, Lamphun traces its roots to the 9th Century, when it was founded by Queen Chama Thevi as the capital of the most northern of the Mon kingdoms in the area that is now Thailand. 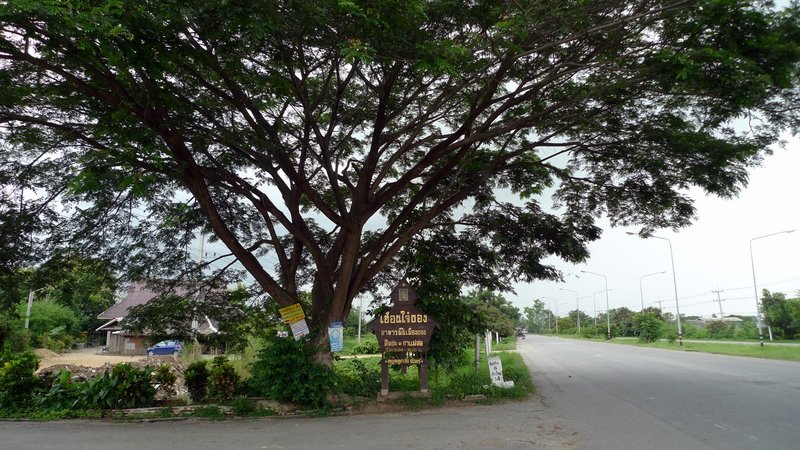 Located on Route 1317 some 15 kilometers west of the city, Huen Jai Yong still feels like it is out in the countryside.  Its landmark is the large rain tree out by the driveway.  In reality, though, civilization is fast approaching.  Not a kilometer away, rice paddies have been transformed into housing developments. 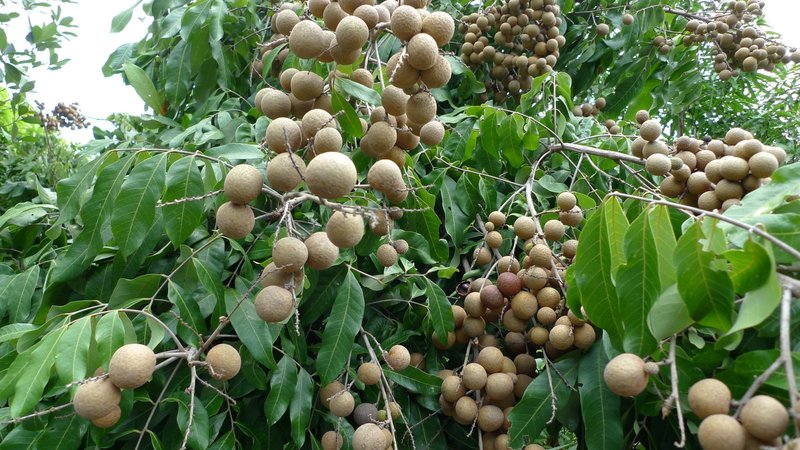 The gardens behind the restaurant were in the midst of lamyai or longan season, with the trees heavily loaded with fruit.  Chickens were strutting about the garden, scratching for bugs amidst the herbs and vegetables. 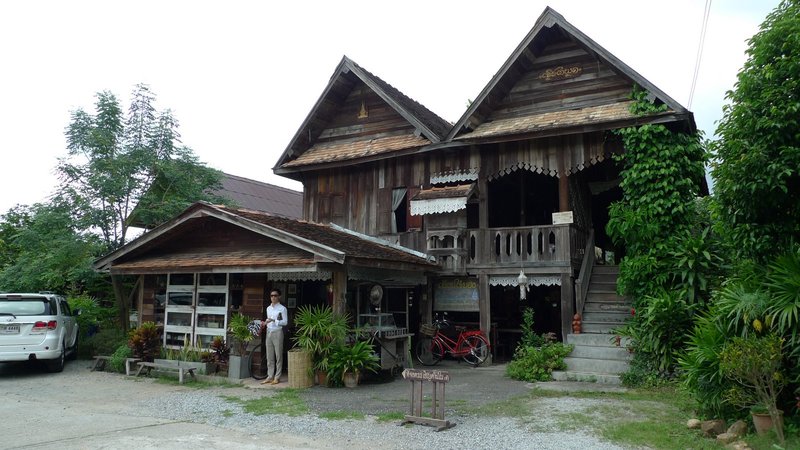 The restaurant itself is a charming old teak wood house, with seating upstairs, downstairs, and in a few adjacent buildings.  A small gift shop is located out front where Tawn is standing. 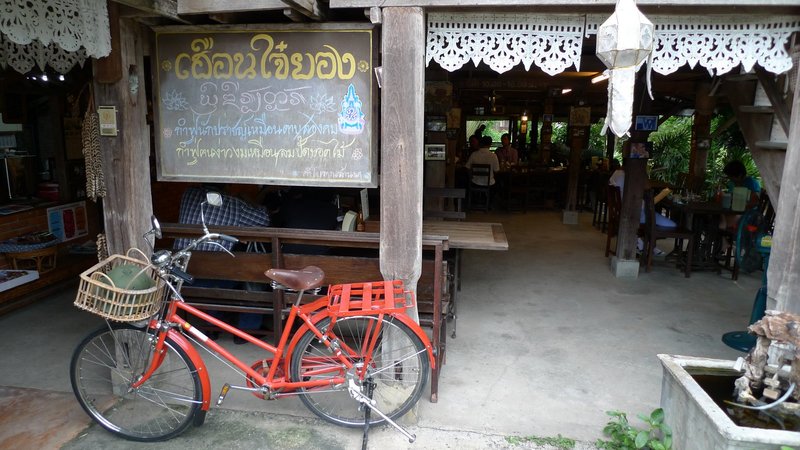 We opted for the open-air seating under the house.  This picture doesn’t show it very well, but several of the tables are made from old long boats with planks added to make the tabletops.  On the sign in pink chalk you can see the restaurant’s name in Lanna, the old Northern Thai language that traces its roots to a time when this region was a kingdom independent of Siam. 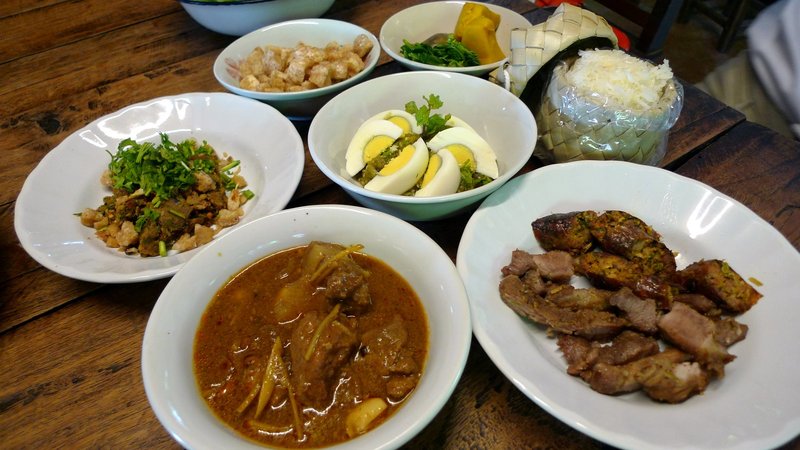 We ordered a variety of foods, sampling several dishes we had eaten at Huen Phen as well as some specialties we had not tried on this trip.  Sticki rice is a staple.

First, let’s answer the question, what makes Northern Thai cuisine distinct?  Thailand has four major regions (North, Northeast/Issan, Central, and South) and each has its own style of cuisine although the have become increasingly merged as Thais move about the country.

Generally speaking, Northern Thai cuisine reflects the peoples who have historically lived in, passed through, and traded with the region.  These include the Mon, Shan, and other Burmese groups; the Hui and Taochew people from China; as well as Indian, Northern Lao, and Malay people.

Northern Thailand is more mountainous, has better rainfall, and somewhat cooler temperatures than other parts of Thailand.  The food tends to be heartier, a bit less spicy, makes more use of fresh herbs and vegetables, and makes less use of ingredients like coconut milk and fish than in other regions.  Whereas fermented fish and shrimp are used as a flavoring in other regions, you see fermented soybeans (trace the roots to China) used more commonly in Northern Thai cooking.

Let’s take a look at what was served: 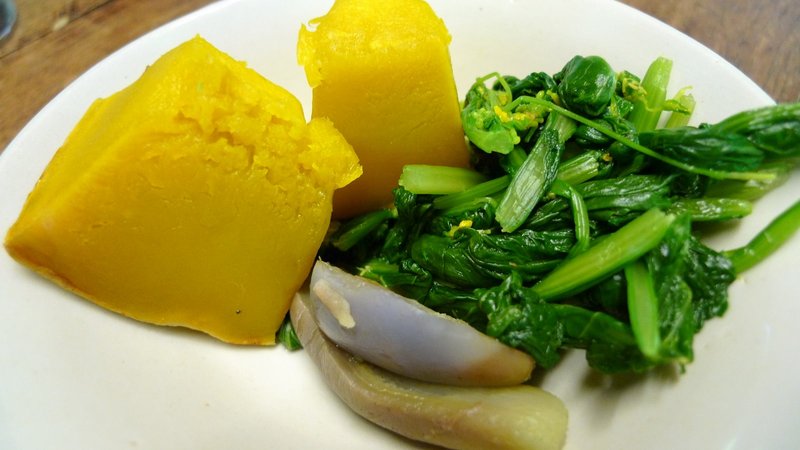 This dish of steamed squash and parboiled greens (similar to kale) and eggplant are served as a kind of side dish that you can go to for a break from whatever main dishes you are eating, kind of like the ban chan in Korean cuisine or pickles in many cultures. 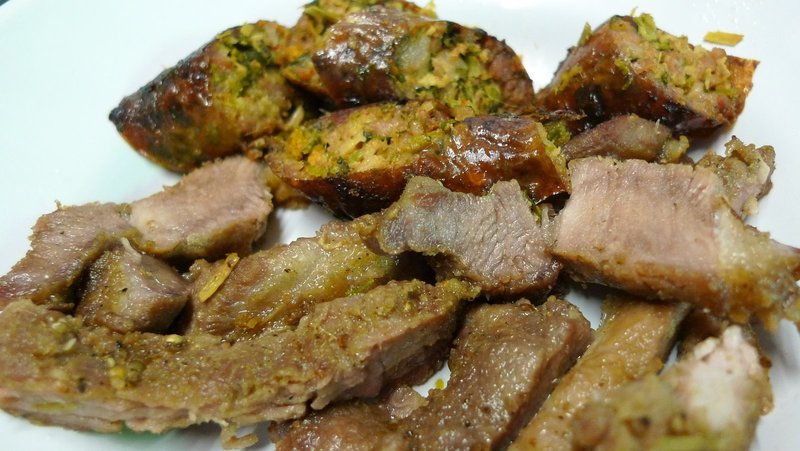 Once again we see the ubiquitous sai oua sausage, this time served with some muu tod or fried pork, known in the Northern Thai dialect at jiin muu. 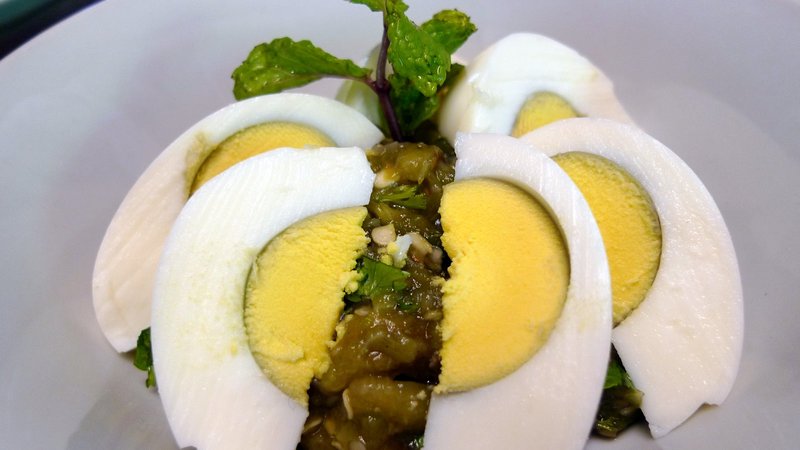 This dish, which is kind of hard to see thanks to the boiled eggs on top, looked at first to be nam prik noom, the roasted green chilli dip.  In fact, though, it was tam baakeua, a salad made of roasted eggplant.  Very tasty with the smoky meatiness of the eggplant enhanced with a variety of herbs and spices then served with the rich boiled eggs. 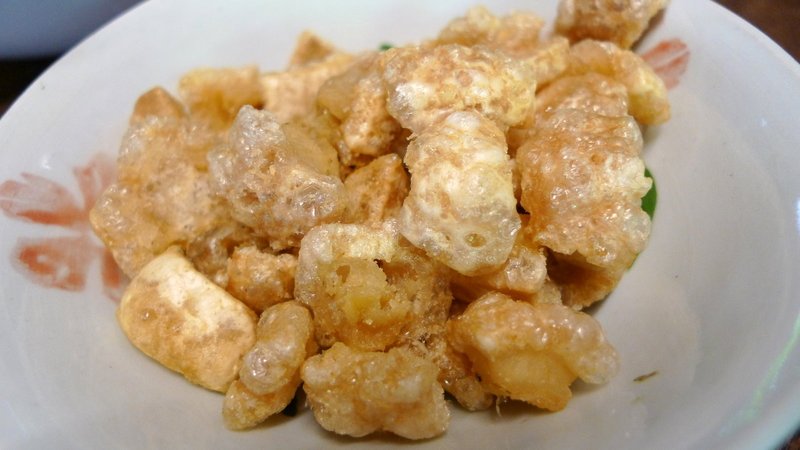 One option for eating the roasted eggplant was this dish of kaep muu or chitlins (as they are called in the southern United States), deep fried pork skin.  Oh, so bad for you and yet so good, too! 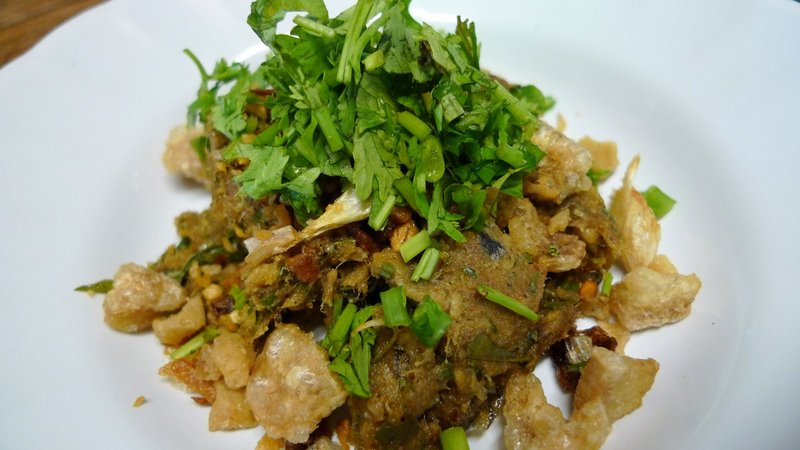 An unusual dish was larb kua plaa nin, of a salad of pan seared tilapia fish flavored with lemongrass, shallots, chilies, and other herbs.  Tasty and similar to, but less spicy than, other chopped meat salads that come from the Northeast.  Interestingly, I learned that tilapia was introduced to Thailand as a gift of Japanese Crown Prince Akihito in 1965 to H.M. King Bhumipol.  It has adapted very well and is found in rivers all across Thailand. 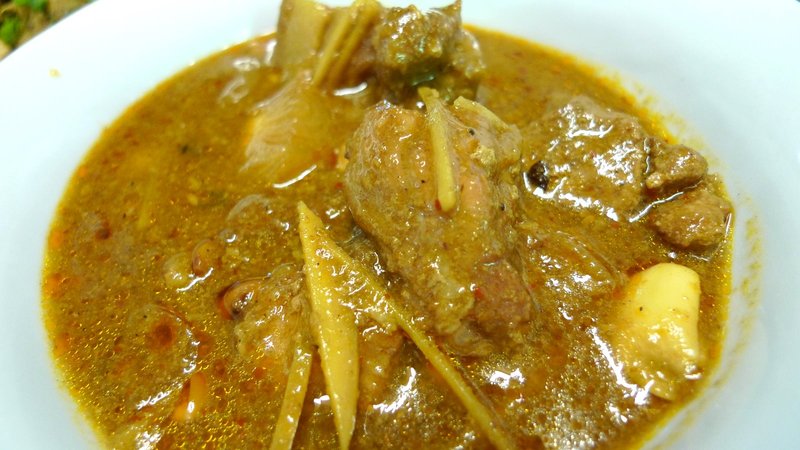 Another version of gaeng hong lay, the Burmese style stewed pork with a tomato based sauce.  This particular version came very close to massman curry and was sweeter than the version we had at Huen Phen restaurant.  While it was tasty, it was almost too sweet for my taste.  Also interesting, it was made with fresh ginger instead of fried ginger. 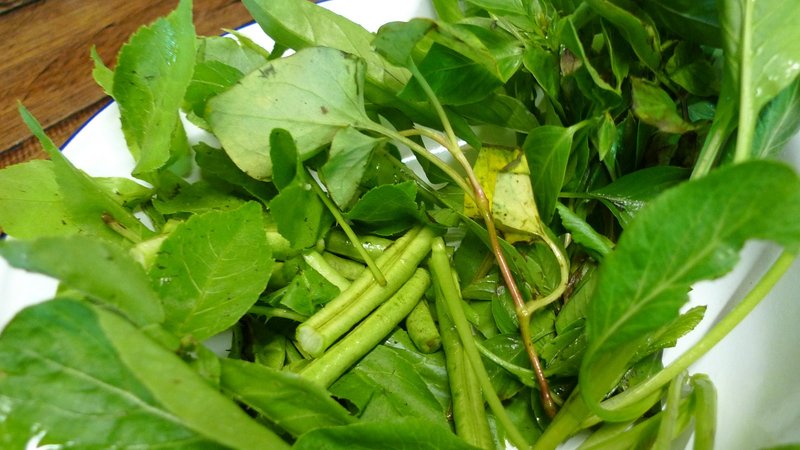 Northern Thai cuisine uses fresh herbs prodigiously and we were served this plate of various herbs and yard beans.  While I didn’t confirm it, I get the impression that these herbs are grown on the grounds of the restaurant. 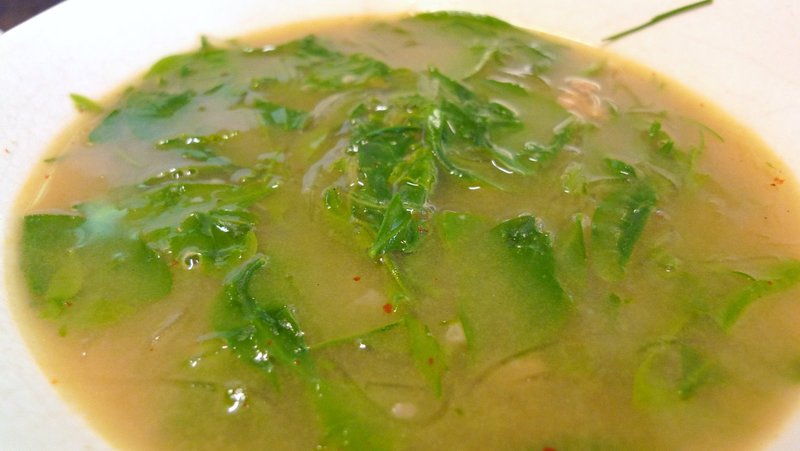 We ended our meal with gaeng pak waan, a soup of “sweet vegetable” which are the tips of a vegetable similar to spinach but much less earthy in flavor.  The broth is made from dried fish.

Our bill came out to about 400 baht for the two of us, about US $13.50.  The meal was a perfect conclusion to our trip to Chiang Mai.  The food is tasty, fresh, healthy, and the flavors are perhaps more accessible than any other style of Thai cuisine.  Now, the question is, when are you coming for a visit?

Directions: From Central Airport Plaza take Mahidol Road towards San Kamphaeng (Route 1317) . Pass the junction of the Outer Ring Road and Route 1317 intersection, the make a U-turn at km 9. The restaurant will be on your left at the large rain tree.