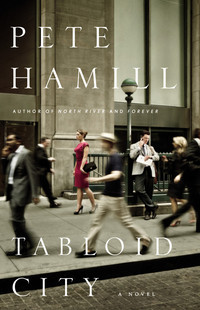 While lying in a massage parlor a few blocks from home, letting someone with strong forearms unknead the knots in my back muscles, I listened to an interview on NPR’s Fresh Air with author Pete Hamill.  A journalist and columnist starting back in the 1960s, Hamill also wrote novels.  He was on the show speaking about his most recent book, Tabloid City, a thriller that takes place in an old-school tabloid newsroom that is struggling to deal with the digital era.

During the discussion, interviewer Dave Davies asked Hamill about a previous book he wrote, A Drinking Life, and his own struggles with drinking, which he eventually gave up cold turkey.  It was Hamill’s response to the question, “What did your drinking take away from you?” that caught my attention and got me thinking.

Here’s his answer with my own added emphasis:

I was [a] very prolific journalist because I could always squeeze enough from my talent to get a newspaper piece done.  What it took away from me was the courage to test the extent of whatever my talent was.

… From a professional and personal standpoint a lot of it was about trying to find out what was there as a writer.  Because my ambition was not to be better than Faulkner or Hemingway or anything like that.  It was to be the best version of myself that I could conceivably be.

This resonates with me because my own upbringing was very much along these lines.  Both sides of my family, but particularly my mother’s side, really emphasized the idea that each of us has a responsibility to live up to our fullest potential in life.

Unlike many of my friends, whose parents expected them to follow a specific career – doctor, lawyer, engineer, etc., my parents emphasized success by pushing me to be the very best I could be, regardless of what field I chose.

What about you?  What does it mean to you, to be the best version of yourself that you could conceivably be?

0 thoughts on “Are You the Best Version of Yourself?”