After six days in Hawai’i, I had attended my cousin’s beautiful beach wedding, I had tasted the holy grail of desserts – macadamia nut cream pie, I had eaten poke and ordered loco moco, and I had bumped along an unpaved road to reach the place where Hawaiians believe the spirits of their dead depart for the next world.  After accomplishing all that, it was time to begin the journey back home.

While the trip was quite similar to the one into Hawai’i, I though I would share some more pictures of the trip for those of you who enjoy them.  Check out the video of our takeoff from Honolulu – the reef just off the runway is gorgeous. 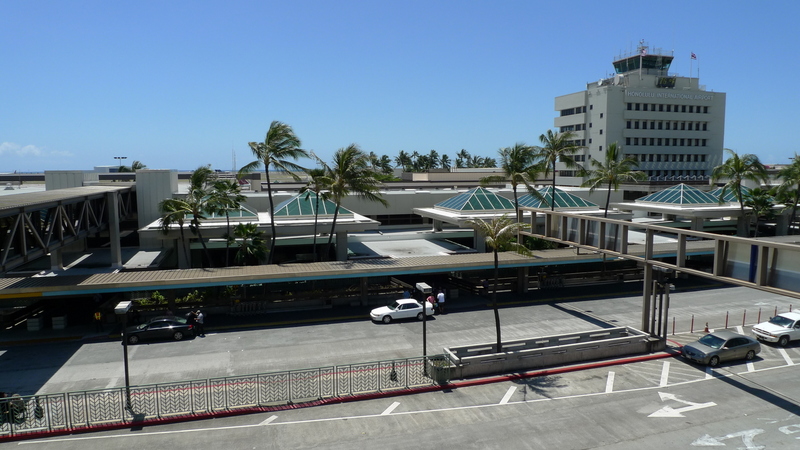 The check-in area of Honolulu International Airport reminds me a bit of LAX.  In fact, it looks more “LA” than LA does. 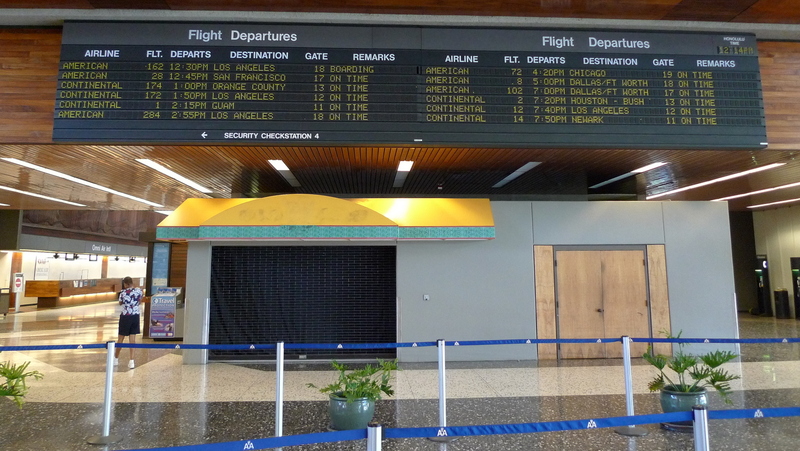 The interior, though, is still in that 1970s time warp that seems to be pervasive in Honolulu.  It seems that an expansion and remodel is planned so we’ll see if that brings the airport into the 21st century. 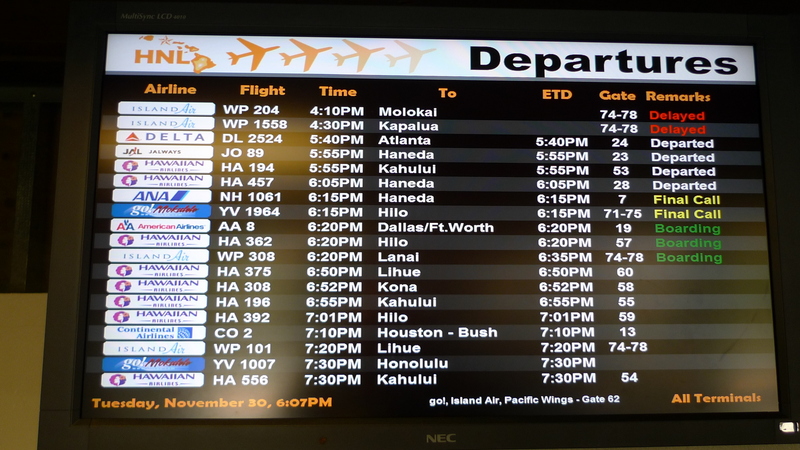 Oddly, this video monitor shows the date as November 30.  Only off by a few months. 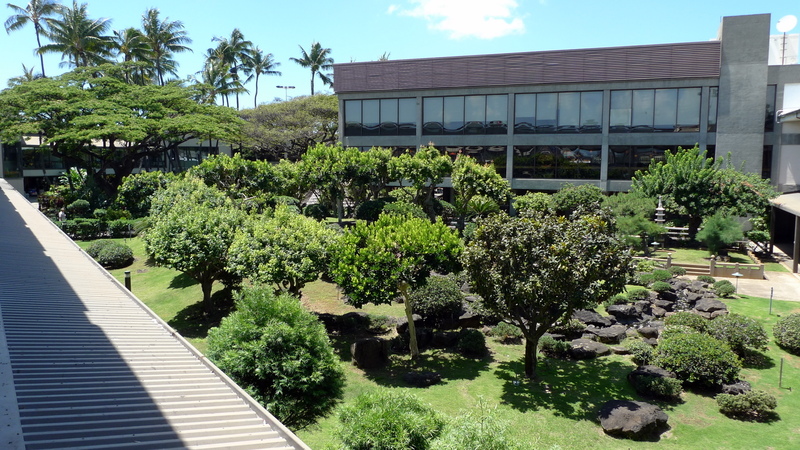 Another beautiful outdoor garden you can access from the gate area.  While the airport is in need of a remodel, I give it high marks for having lots of open air spaces and also for offering a lot of visibility of the airplanes.  A lot of airports make it hard for you to appreciate the view of the planes, which I think is a part of the romance of air travel.  Here is a selection of the planes I saw while waiting for our flight: 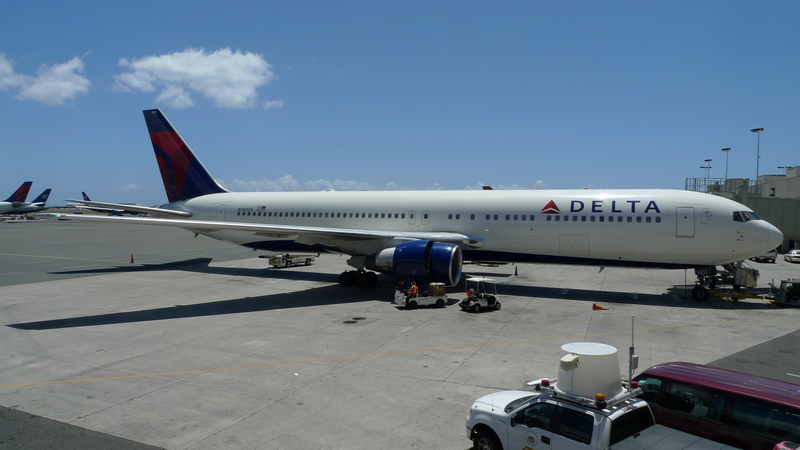 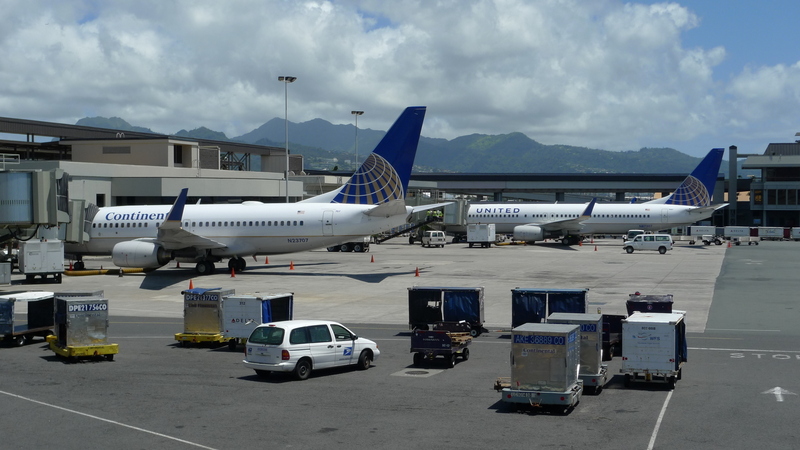 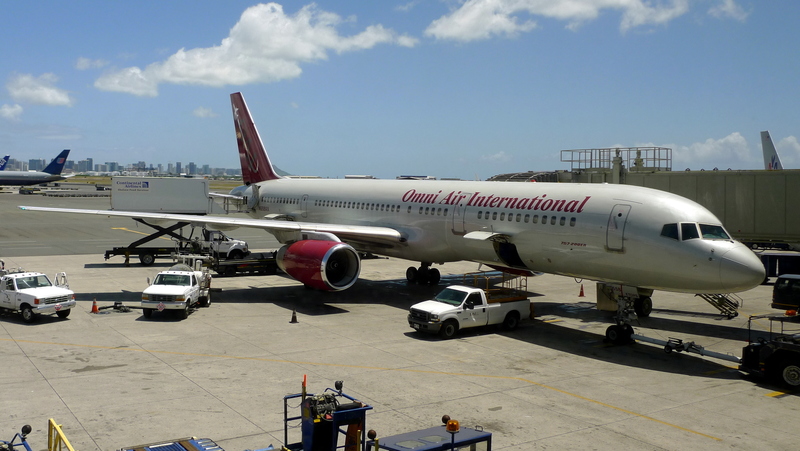 This Boeing 757-200ER belongs to Omni Air International, a charter operation based in Tulsa, OK. 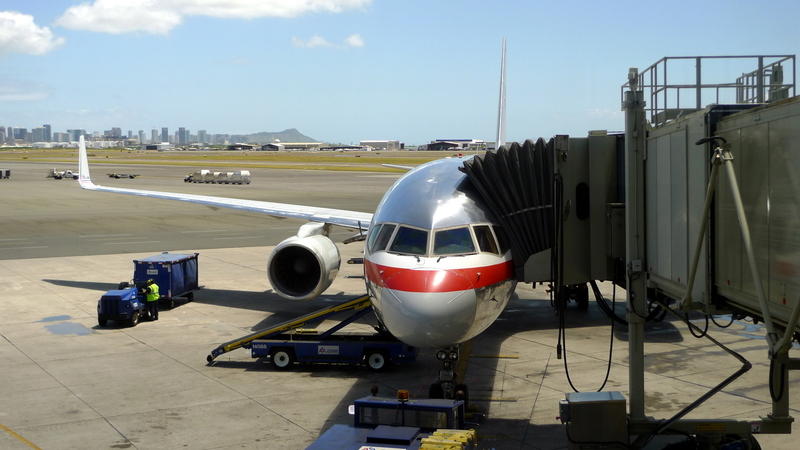 An American Airlines Boeing 757-200 with winglets, bound to Los Angeles.  (Lots of flights to LAX, no?) 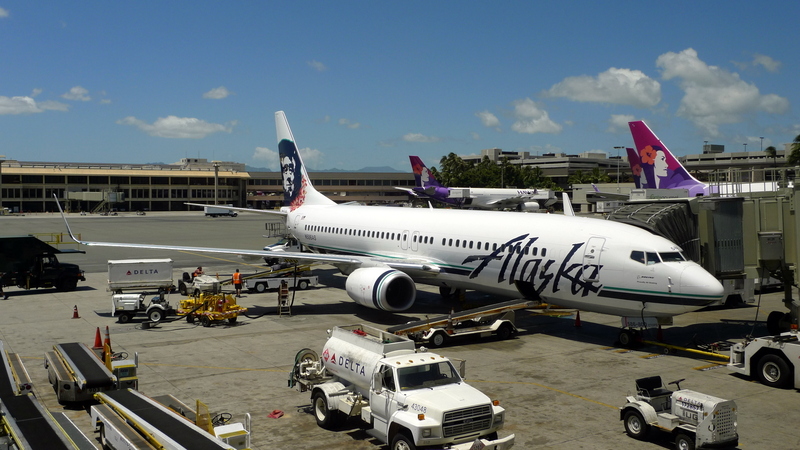 Alaska Airlines also flies to Honolulu.  This flight is going to Portland, OR.  This Boeing 737-800 is part of their Hawaiian subfleet – notice the lei of flowers around the Eskimo’s neck. 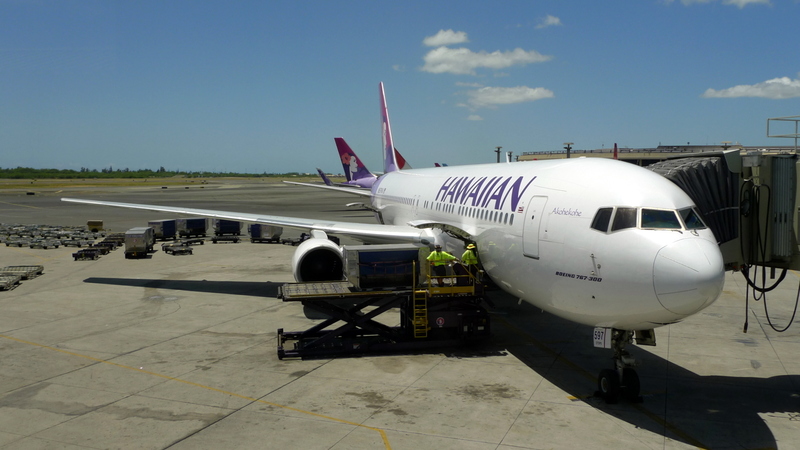 Hawaiian B767-300 without winglets 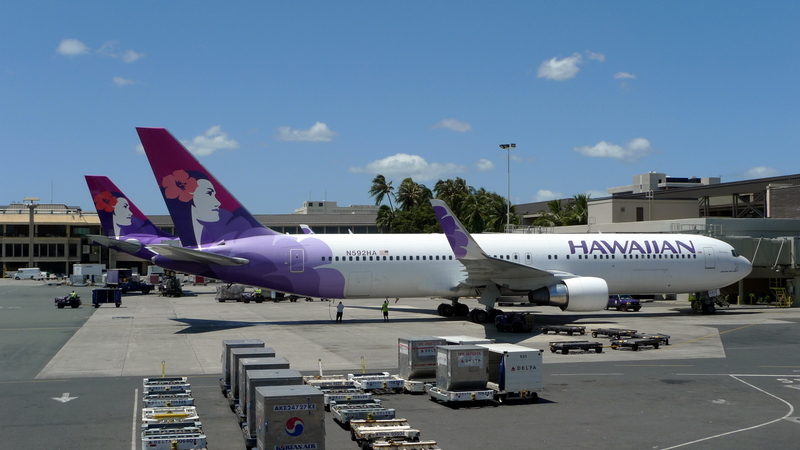 Hawaiian Boeing 767-300 with winglets.  These winglets help reduce drag, resulting in an improved fuel economy of about 3-4%.  One of Hawaiian’s new Airbus A330s is in the background. 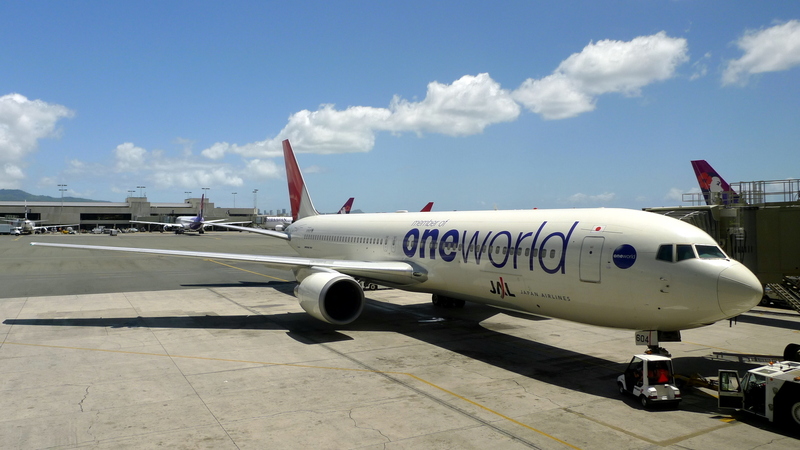 Japan Airlines Boeing 767-300 in “Oneworld” alliance colors.  This plane is bound for Osaka. 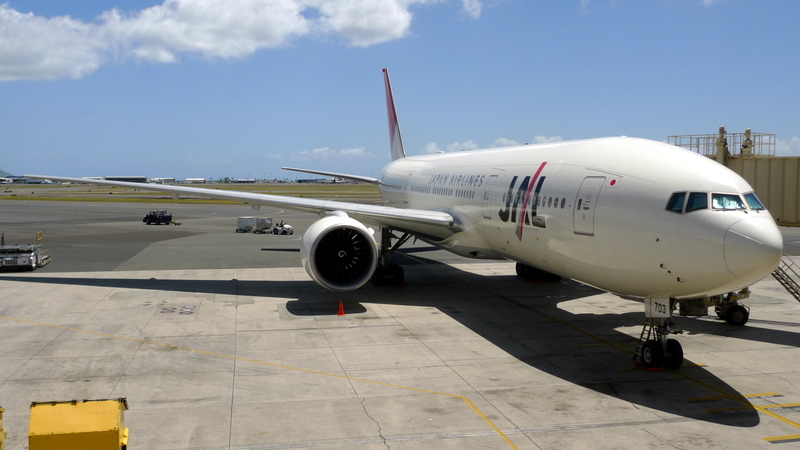 Another Japan Airlines plane, this one a Boeing 777-200, destined for Tokyo. 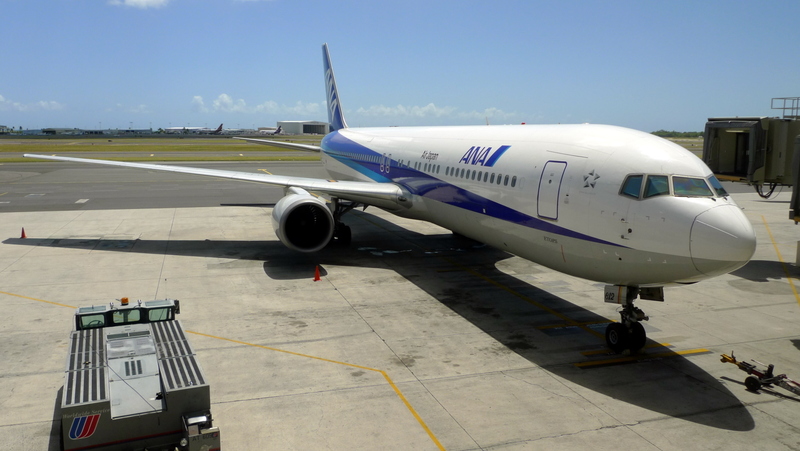 The other major Japanese carrier, ANA (All Nippon Airways), Boeing 767-300.  This is operated by ANA subsidiary Air Japan, which operates charter flights to popular vacation destinations. 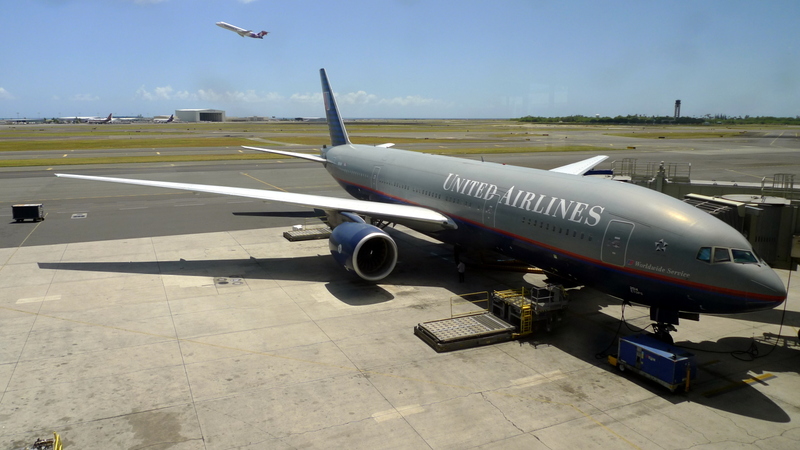 A United Airlines B777-200 scheduled for Chicago O’Hare.  A Hawaiian Airlines Boeing 717 departs for another island in the background. 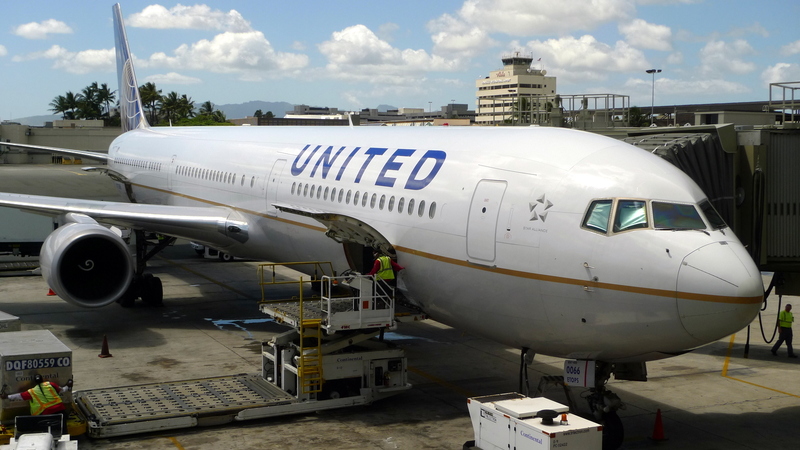 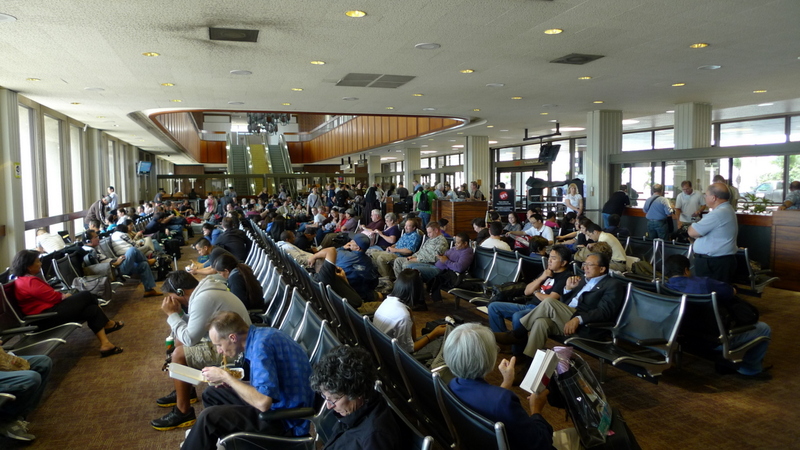 The gate area was particularly crowded.  In fact, the flight was oversold and they were asking for volunteers but $300 in travel vouchers was incentive enough, since I’d have to use the vouchers on another Continental flight! 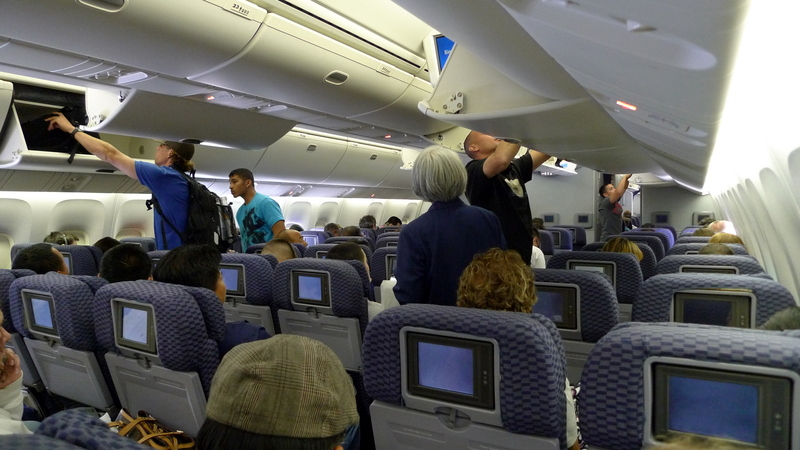 The interior of our plane during the boarding process.

A video of our takeoff from the Reef Runway in Honolulu and landing in Guam. 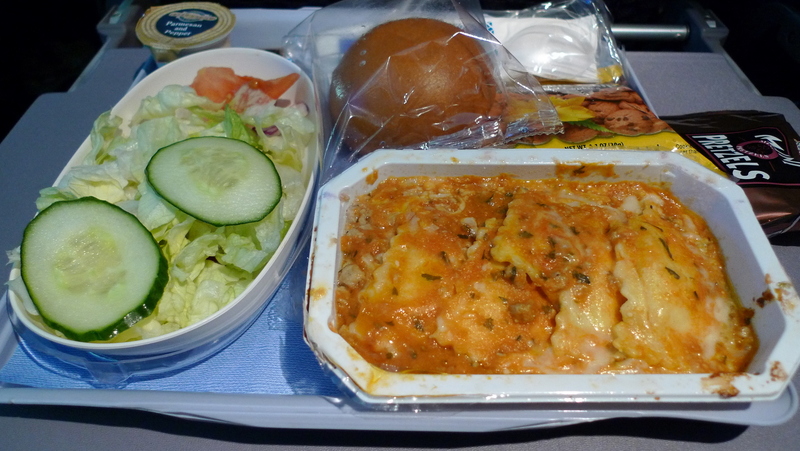 The lunch service was a choice between cheese tortellini and some chicken dish.  I overheard the flight attendant tell another passenger that the pasta was the better of the two options, so that’s what I went with.  It was actually pretty tasty, better than the food we had been served on the inbound flight. 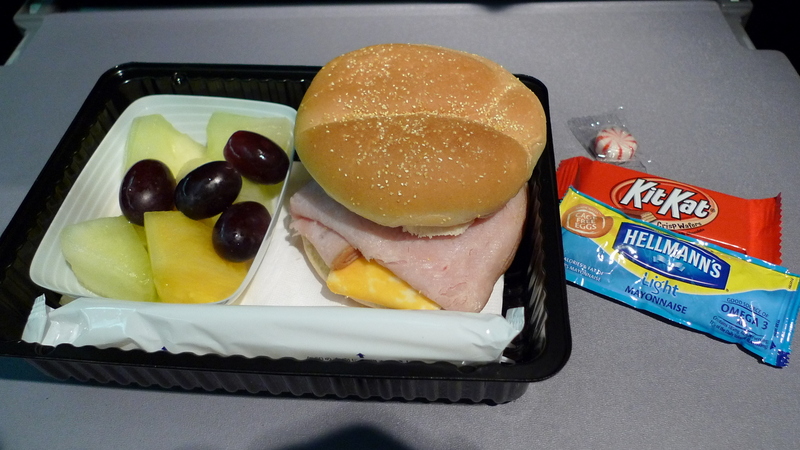 Mid-flight the flight attendants served ice cream – cups instead of sandwiches – and then about an hour before landing in Guam, they served these turkey ham sandwiches.  All in all, I think the flight from Honolulu to Guam and onto Hawaii was better than when we had traveled to Hawaii, probably because it was a daytime flight and we weren’t utterly exhausted. We didn’t have that much connection time in Guam.  Here’s a picture of a Chinese tour group taking a picture moments before boarding.  While they were seated further back in the plane and thus were to board earlier, we sneaked ahead and the gate agent, seeing the unruly crowd coming towards the boarding gate, let us board ahead of them. Once again, we had the option of buying extra leg room by sitting in the exit row.  It was worth it and just like on the flight from Hong Kong to Guam, we had an empty middle seat between us.  Interestingly, this flight was operated exactly a week after we had left Hong Kong and one of the flight attendants from the flight out of Hong Kong was working our flight back to Hong Kong.  I don’t think he recognized us.

Some thirteen hours after leaving Honolulu we arrived in Hong Kong, at about 8:00 pm.  We headed into Ho Man Tin, a portion of Kowloon where friends of ours live.  More about our two days in Hong Kong – and two Xangans we ran into – tomorrow.

0 thoughts on “Heading Home: Honolulu to Guam to Hong Kong”