The neighborhood I live in – Thong Lo – is part of the “middle Sukhumvit” area in Bangkok.  Located east of the old city and not too far from the Chao Phraya River, fifty years ago this area was considered to be really far out in the countryside.  Well-off families of merchants and civil servants bought pieces of land for their weekend homes along narrow sois (alleys) that led off larger streets that paralleled khlongs (canals). 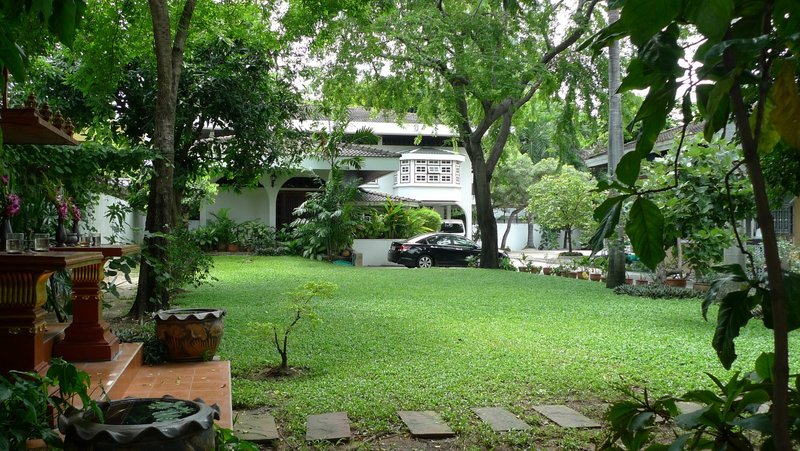 Over time, their houses grew with additions for children and in-laws.  Trees grew, too, providing beautiful shade and cooler temperatures even as the city and all its ill effects – noise, pollution, pavement, and tall buildings – crept into the neighborhood. 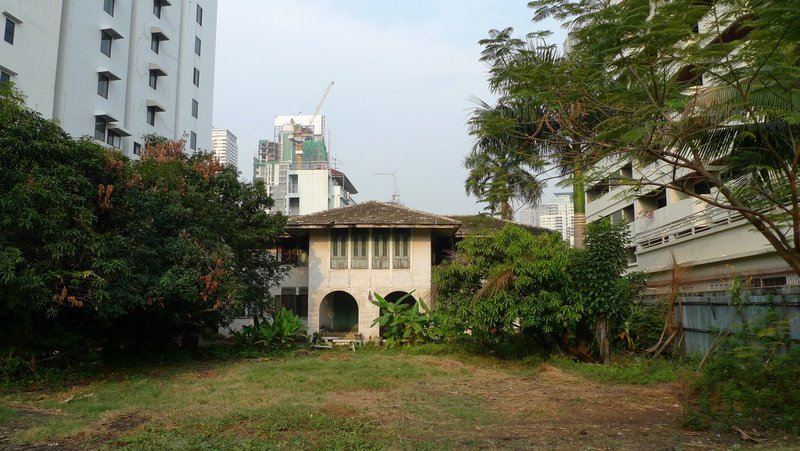 Since there are no annual property taxes (although they are being discussed by the legislature), there is little incentive to sell unused property.  As these old homes were encroached upon by modernity, families often fled to other properties and some of the beautiful residences fell into disrepair. 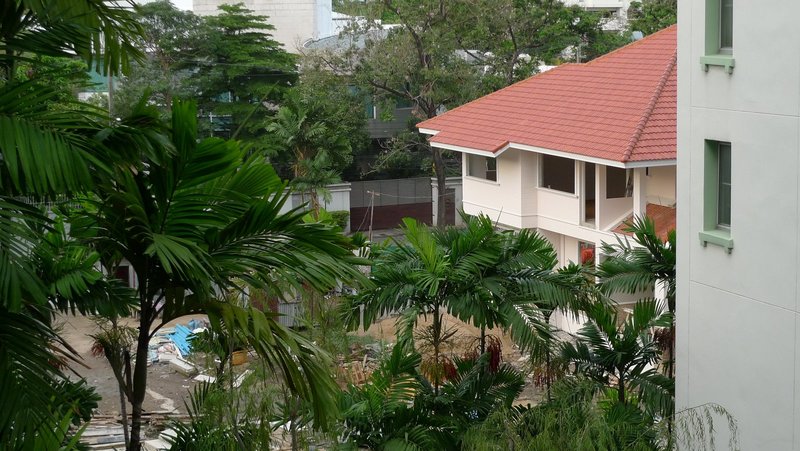 Sometimes the family, or their descendants, will raze the old buildings and construct new ones.  That’s happening next door to us as two older houses have been torn down, the adjacent properties have been combined, and a new house if being erected.  Of course, this required the removal of some of the beautiful (and tall) old trees because the sons of the owner didn’t want leaves falling into their swimming pool.  Instead of leaves, they will get to be spied upon by half of my neighbors. 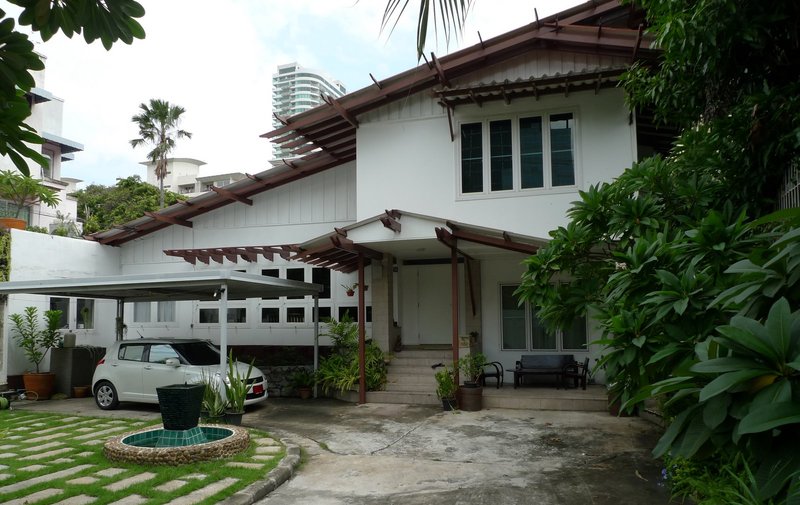 Many of the older houses are built in a “tropical deco” style and were designed with the environment in mind.  With wide overhangs and carefully oriented windows, natural ventilation kept the house comfortable most of the year and air conditioning was rarely necessary as the breezes and large trees worked in tandem to cool the house. 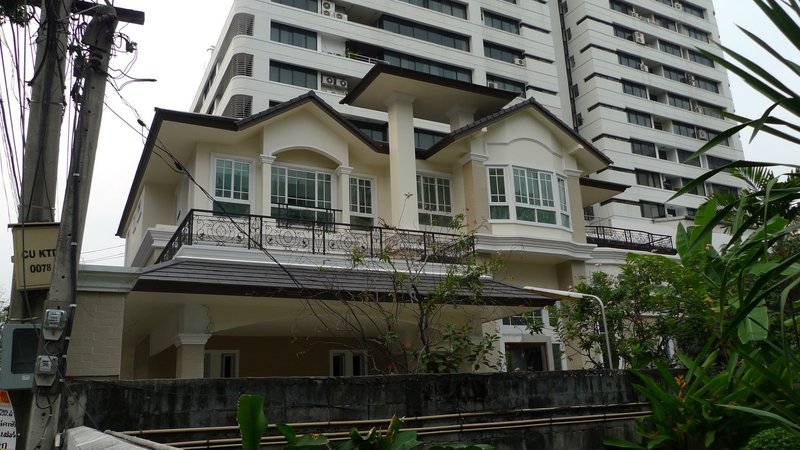 Not so much these newer homes, the designs of which are a mish-mash of styles, resembling nothing so much as a housing development in the suburbs of Los Angeles.  Take the above house which is being built on Sukhumvit Soi 10.  What is that deck-like structure elevated above the house?  It couldn’t possibly be chimneys because why would anyone have fireplaces in Bangkok? 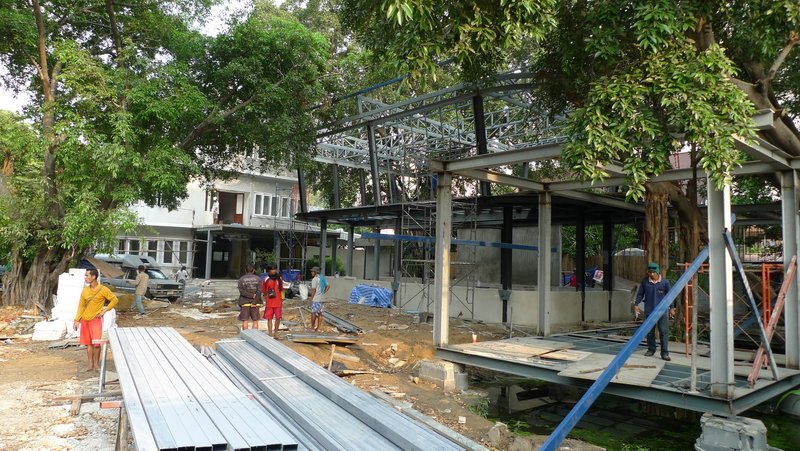 Sometimes the older houses, instead of being torn down, are turned to commercial uses either through lease or sale.  Just down the street from us, this beautiful three-story home (a bit hard to see in the background) is being transformed into a new branch of Curries and More, a Thai restaurant operated by the popular Baan Khanita group.  They are adding another building that is being built around the existing trees and it looks like the setting will be beautiful, complementing the style of the original house rather than competing with it. 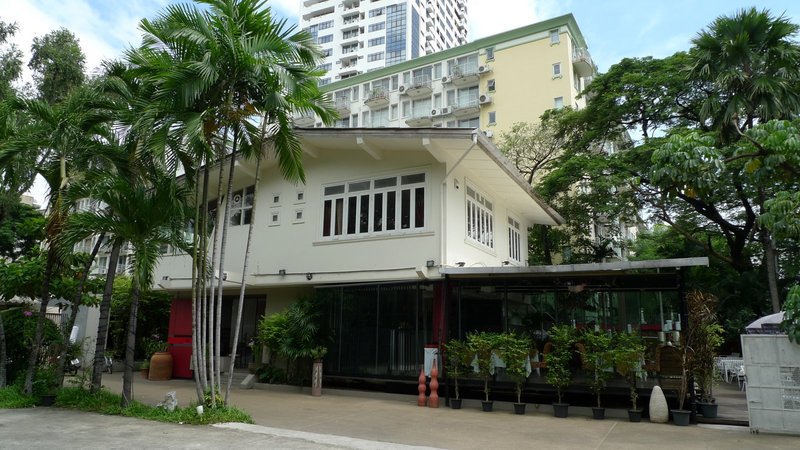 Another example, just next door to our condo, is a house that was turned into Red, an upscale Indian restaurant.  While the people living adjacent to the restaurant don’t appreciate some of the late-night celebrations held there, the owners have done a nice job using the original building. 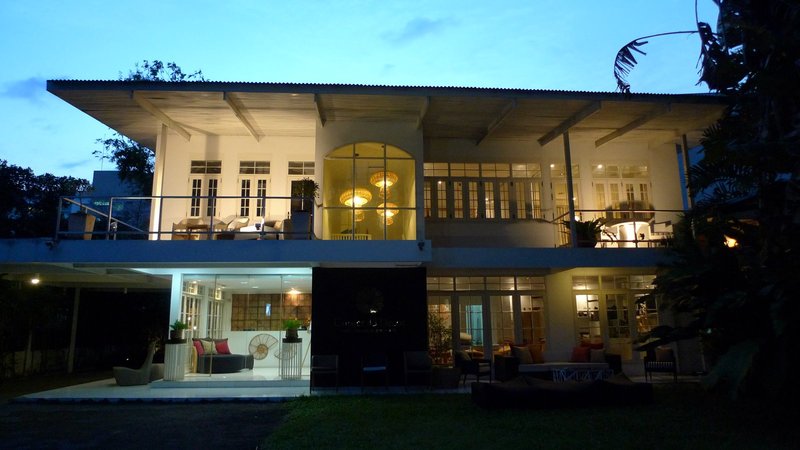 Perhaps the nicest example is across the street and a few doors down from us, a company that designs and sells furniture including outdoor patio sets that are perfectly suited to the wide verandas featured in the house’s design.

It is interesting to watch how the neighborhood changes.  What started out as weekend homes in the far suburbs has become condos, restaurants, shops, or just rebuilt homes in the vibrant heart of the city.  All a part of the unique character and charm of Bangkok.

0 thoughts on “Old Houses of Sukhumvit”