Weeks ago, a group of Tawn’s university friends conspired to hold their holiday dinner on Christmas Eve.  “It’s a potluck,” they said.  “Everyone should bring something!”  For whatever reason, I decided a lasagna would be a nice addition to the eclectic mix of food.  And as the party crept closer, I was possessed with the idea of making the lasagna from scratch.

My uncle’s mother-in-law makes the best lasagna, a recipe-less dish with a meaty sauce and lots of gooey mozzarella cheese.  Since there is no recipe from which to work, I turned my attention to various online resources, settling (kind of) on a recipe from fxcuisine.com for Lasagna Bolognese.

The process was two-part: The first part was to make a hearty ragù in the traditional style of Bologna, Italy. 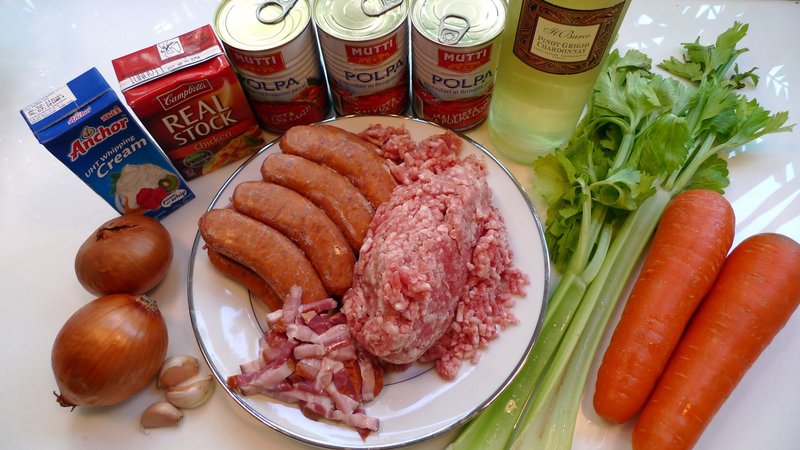 This recipe is based one one written by two legendary Bologna home chefs, sisters Margherita and Valeria Simili, from their book Sfida al Matterello. I found it presented in exacting detail on fxcuisine.com.

It uses both butter and oil, pancetta or parma ham, a mixture of beef and pork shoulder, puréed tomatoes, onions, garlic, carrot, celery, chicken livers, dry white wine, milk, chicken stock, and salt, pepper, and nutmeg to taste.  Reviewing my picture, you will notice that I made some substitutions.  The meat is just ground pork and spicy Italian sausage (which I removed from the casing), instead of the beef and pork shoulder mixture.  The chicken livers have been removed but I did substitute an anchovy fillet. 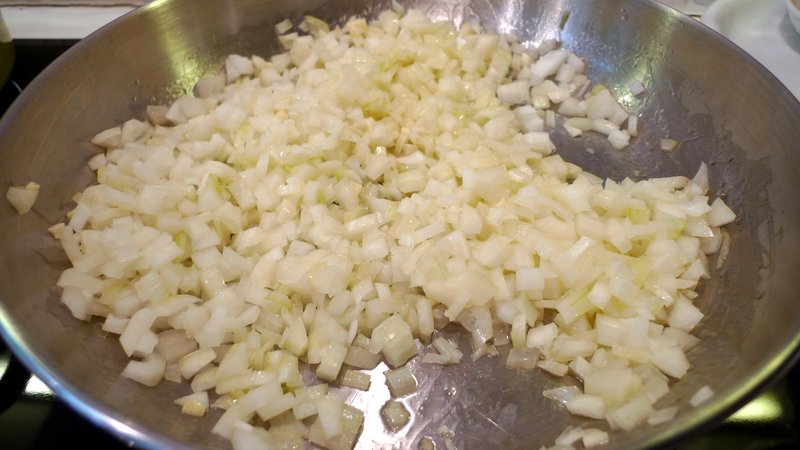 The first step after prepping all your vegetables and other ingredients, is to sauté the onions until soft but not browned.  This is done in a mixture of oil and butter. 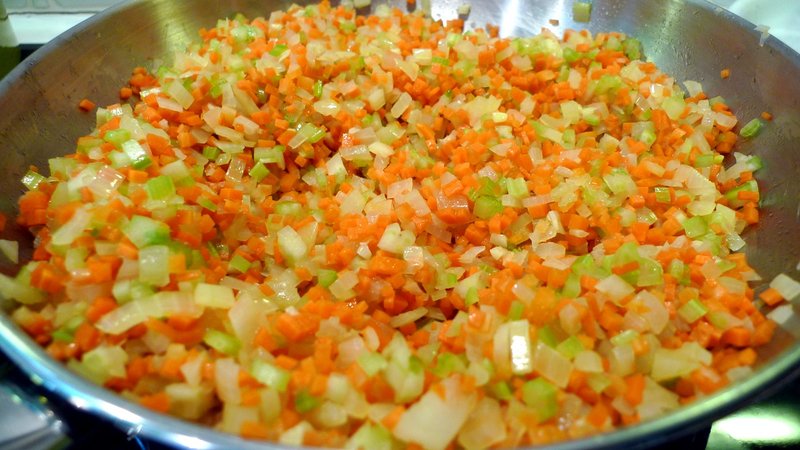 Add the carrots and celery and sauté further until they start to brown.

Add the pancetta.  You can also use Parma ham or good quality dried bacon, finely diced. 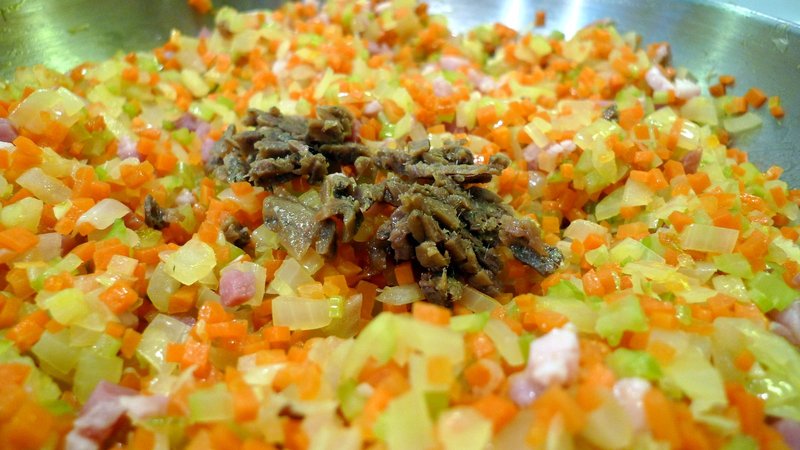 In lieu of chicken livers, of which you use only one or two for a more meaty flavor, I diced one anchovy fillet and added it to the onion, carrot, celery, pancetta mixture.  While I would have preferred to stick with the chicken liver as per the original recipe, one must accommodate one’s spouse’s preferences.  This is the secret to a happy marriage.

After removing the aromatics to a bowl, I browned the ground pork and sausage in small batches.  A key to browning meat is to not crowd the pan, otherwise you steam it more than brown it.  As each batch finished browning, I added it to the bowl of aromatics.

Finally, after all the meat was browned, I deglazed the pan with a bit of white wine.  This simply means I scraped down the pan as the wine was boiling in order to remove all the tasty little caramelized bits that were stuck to the bottom.  After the alcohol burned off – the point at which it stops smelling like boiling wine – I added the liquid and caramelized bits to the bowl of meat and aromatics. 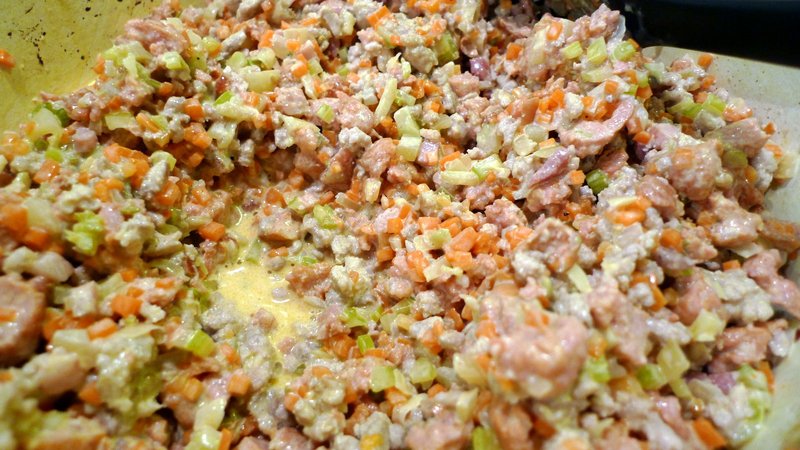 Switching cooking vessels, I placed the whole mixture in a large Dutch oven on medium heat and added the warmed milk.  Actually, I used a combination of cream and milk, just for some additional richness since I used a leaner meat.  The milk adds a sweetness that softens the “meatiness” of the ragù. 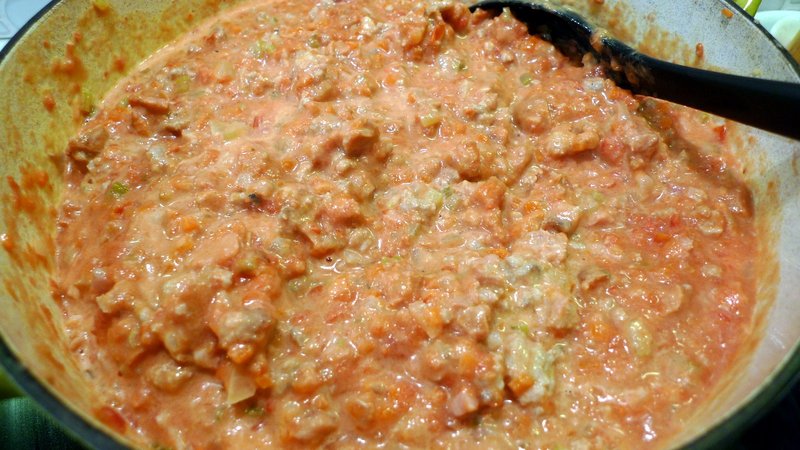 Once the meat mixture was boiling, I added some canned puréed tomatoes.  In my book, canned tomatoes still count as scratch because the tomatoes you can find here in Thailand just aren’t as rich and sweet and tomatoey as canned ones.  To this is added some chicken stock.  I also cheated and used boxed stock since the amount was small and not worth the effort to make stock from scratch.  After this comes to a boil, reduce it to a simmer, cover tightly, and then let simmer for three to four hours. 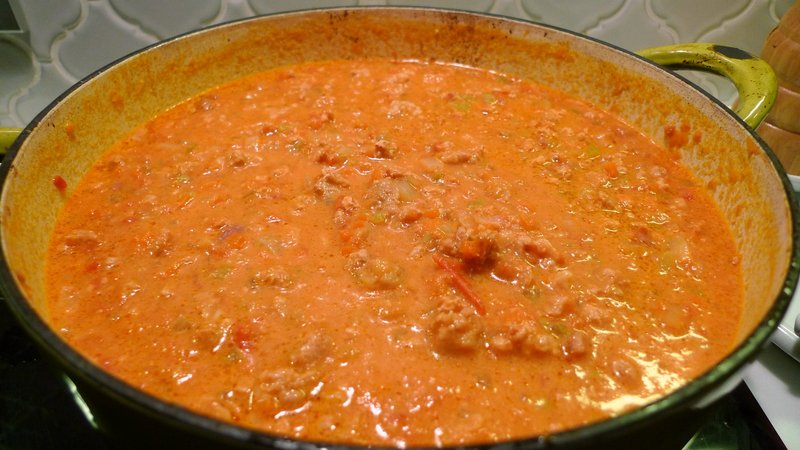 The result, after four hours, is a wonderful sauce.  I let it cool and then refrigerated it for two nights before continuing with the second step of the process.  For some reason, sauces, stews, and ragùs benefit from some time to rest.  The flavors mingle and become much more than the sum of their parts.

The second stage of the lasagna-making process was to make the pasta and assemble the lasagna.  I opted to use a semolina flour pasta, which is a little more stable than one made with all-purpose flour.  While I have made pasta from scratch two or three times, I don’t have a lot of experience.  “Pasta making is easy!” people will tell you.  While that is true, it is also a bit of a process and tends to require a bit of cleaning up, at least when you are inexperienced.  Maybe if I practice more, pasta making will be less of a production. 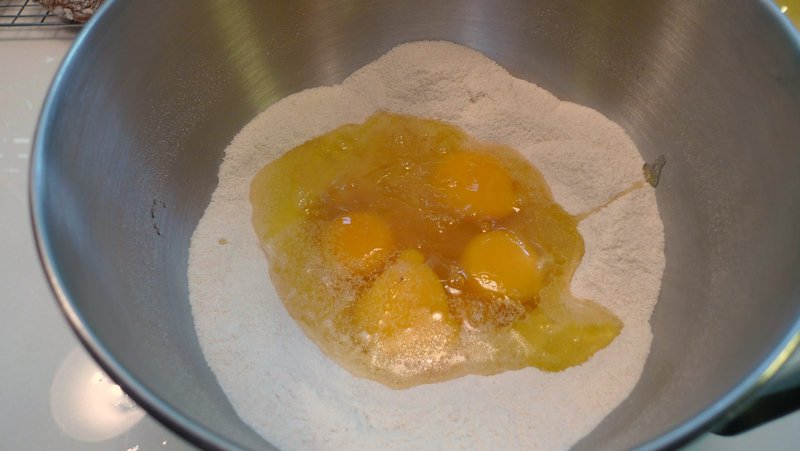 The ratio is easy: one large egg to every 100 grams of flour.  I added a little pinch of salt and also a small splash of olive oil to make the dough a little more forgiving of me.  In this case, I used six eggs and 600 grams of flour, which makes a lot of pasta! 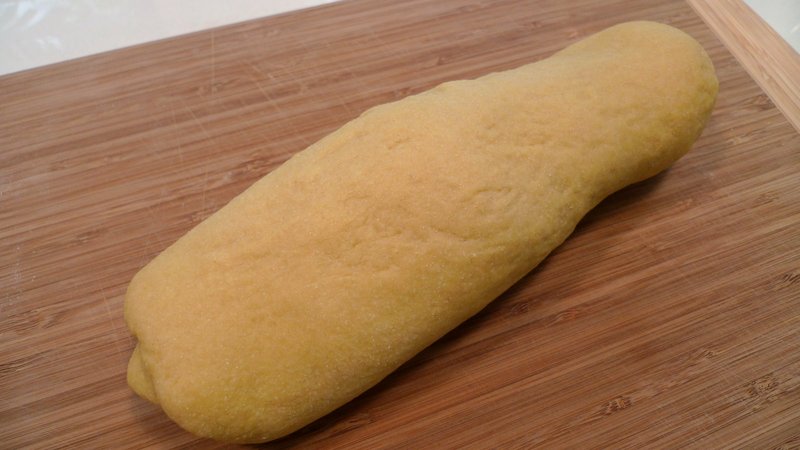 I used the Kitchen Aid mixer to combine the dough, but it was pretty dry and my machine doesn’t have the strength necessary to knead it.  Desirous of Popeye-like forearms, I kneaded the dough myself for about ten minutes, until it became silky.  Well, silkier.  Then I let it rest in a plastic bag, refrigerated, for thirty minutes. 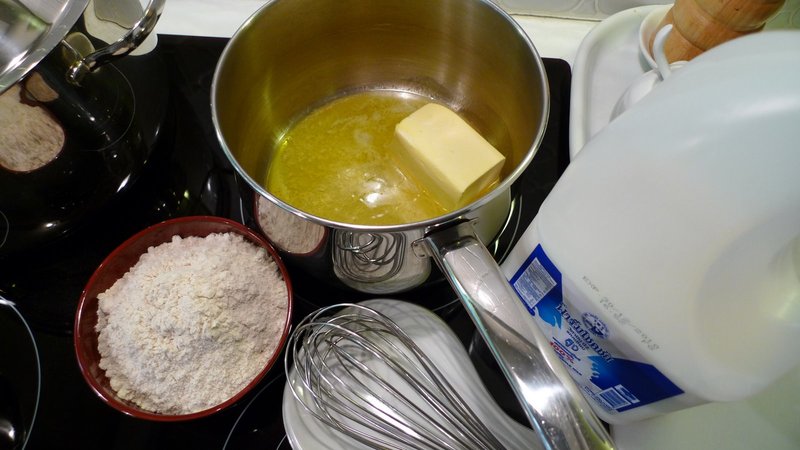 While the pasta dough was snoozing, I made a Béchamel sauce.  This is a really basic white sauce that is the foundation of macaroni and cheese.  For this reason alone, everyone should learn how to make it.  Here’s the formula: equal weights flour and butter.  The process is equally simple: melt the butter, add the flour and whisk for a few minutes as the flour cooks.  Then add the milk a little at a time, whisking until smooth and at the desired consistency.

There was probably no good reason to make the sauce this early, but I know that once you start with the pasta-making process you need to be undistracted. 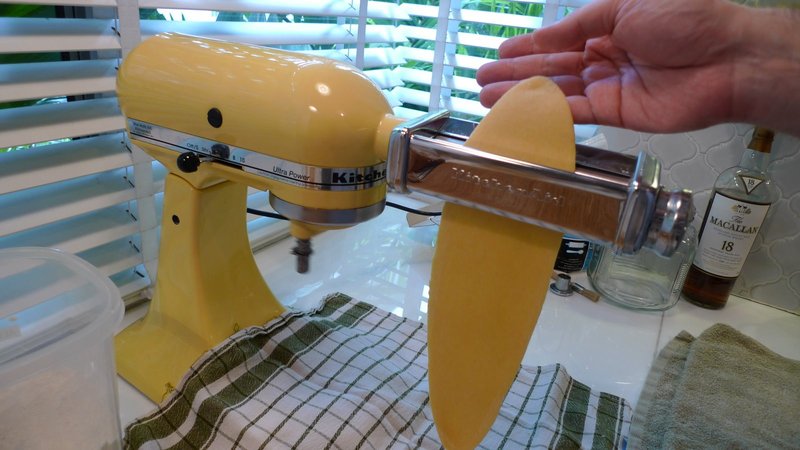 I used discs of pasta dough about the size of a small lemon and passed them through the pasta roller until they reached the second-to-the-last setting, almost as thin as crèpes.  Upon reflection, leaving them one setting thicker might have been better as lasagna is a hearty dish, calling for a hearty pasta. 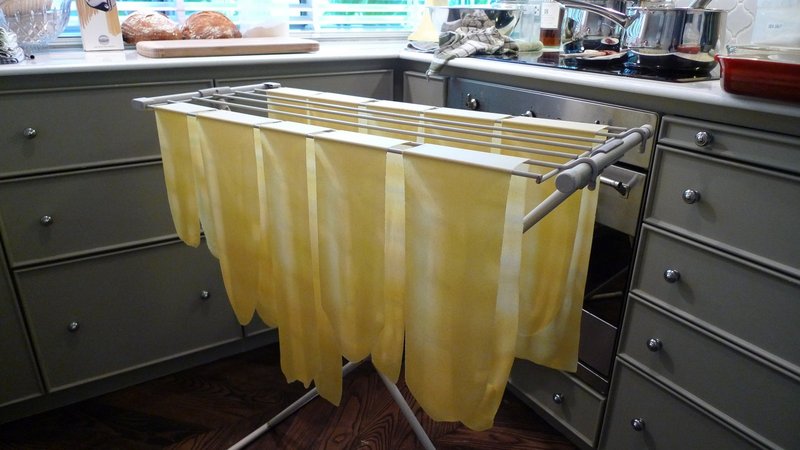 Here is the result of my work, drying on a well wiped-down clothes rack.  The problem is that the wires for the rack are too narrow, and my pasta sheets stuck to them.  I had to be very careful when removing the pasta, lest they tear in half.  You’ll notice the inconsistency in both sheet width and length, an illustration of how far I have to go before I am a pasta Jedi master.

In case it looks like a lot of pasta, it is.  This is enough pasta for three full-size lasagna dishes! 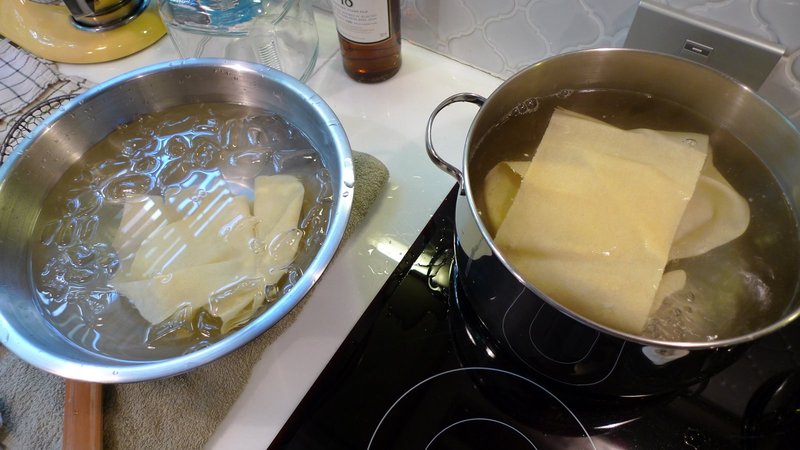 Using a large pot of boiling salted water and a large tub of ice water, I cooked the pasta sheets one at a time for about 30 seconds.  The idea isn’t to cook them to completion but to make them soft, flexible, and generally more stable to handle. 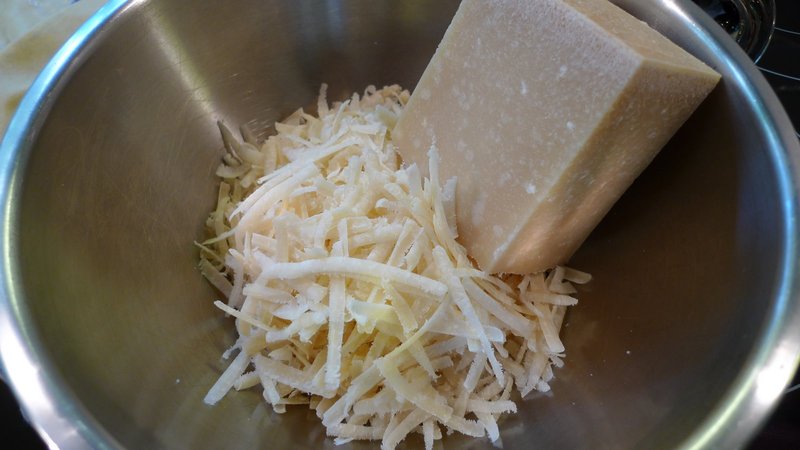 Before assembly, grate the high-quality Parmesan Reggiano cheese.  No mozzarella in this recipe.  I have to say, it is actually very nice without the mozzarella.  I think Americans have learned to expect that their lasagna will be gooey.  Time for mass re-education. 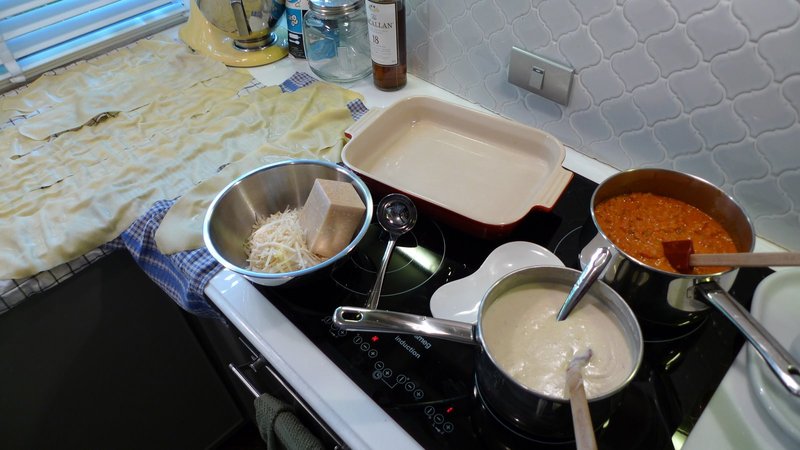 Okay, we’re ready to assemble.  Pasta sheets are on tea towels, Béchamel sauce and ragù are warm but not bubbling, and the cheese is grated.  One note on the ragù, you should taste it and adjust the seasoning at this time.  Each component of the dish should taste good by itself if you expect the final dish to taste good. 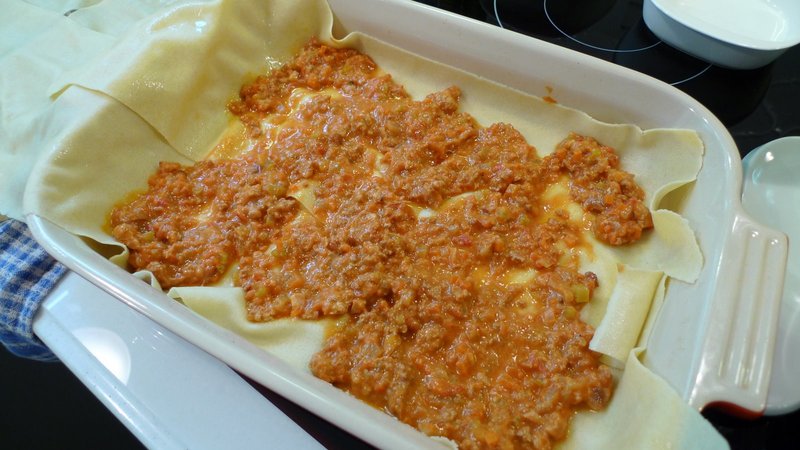 Since my sheets of pasta were varying lengths, I just let them overlap and fold back on themselves as necessary, giving the dish a rustic, authentic look.  Unlike what the original recipe said, I think there needs to be a layer of ragù under the first layer of noodles.  Simply oiling the dish wasn’t enough to prevent the bottom layer of pasta from sticking.  Add some ragù.  Doing it again, I would also double the amount of ragù to make it meatier. 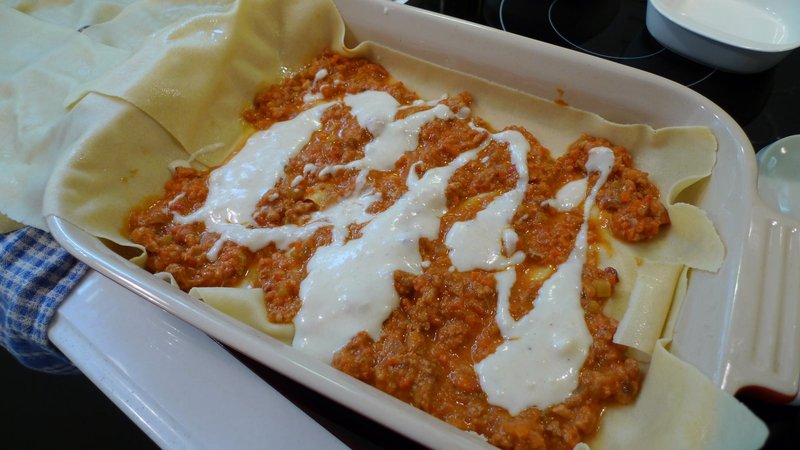 Then add the Béchamel sauce.  The recipe stressed that this does not need to be incorporated into the ragù as they are meant to be two distinct layers.  So I just poured it on and left it as is. 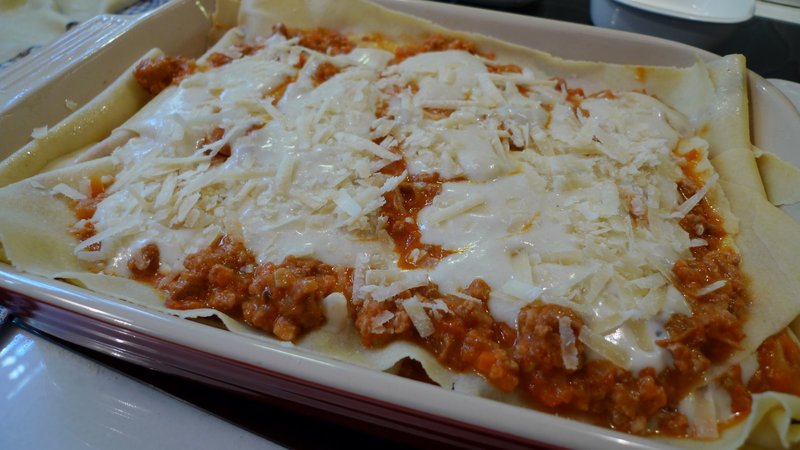 Sprinkle on some Parmesan Reggiano cheese, then continue with the alternating layers of pasta, ragù, Béchamel sauce, and cheese until the dish is full. 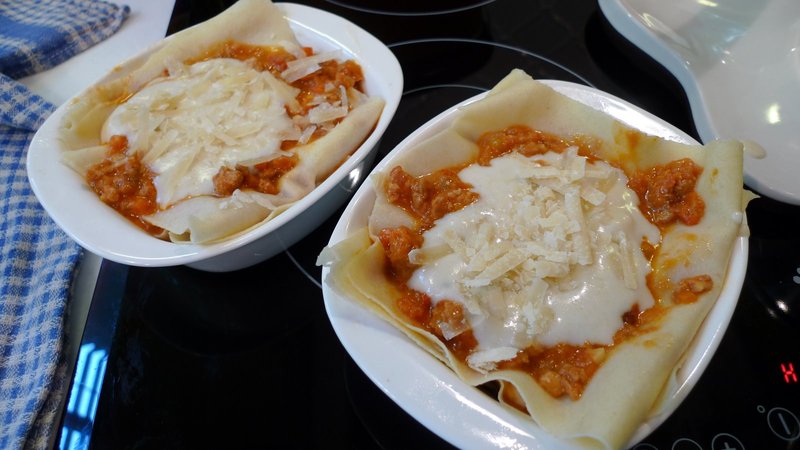 I made two single portion lasagnas, each with a single long noodle.  Cute, huh?  They freeze nicely, too.

These are covered tightly in foil (oil the piece that is touching the top so it doesn’t stick too badly) and then bake at 180 C / 375 F for about 50 minutes or until the lasagna is bubbling.  Remove the foil and cook for another ten minutes until the top is lightly browned. 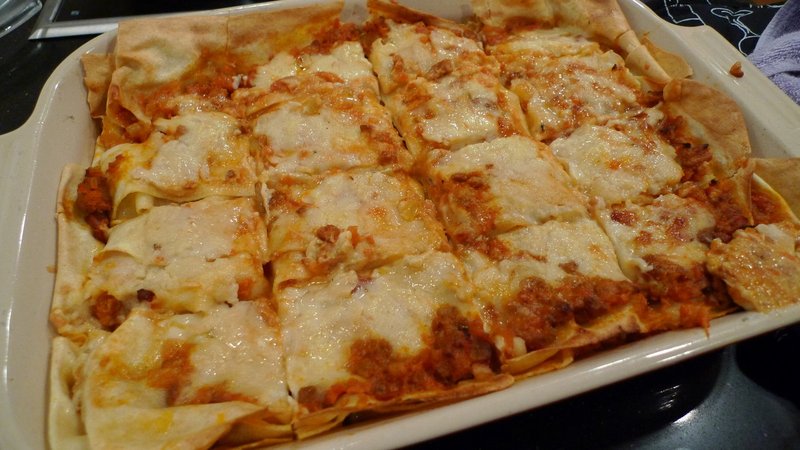 The end result.  I removed the foil too early so the pasta edges are a little crisp, which is actually kind of nice.  The party guests really enjoyed the lasagna and if pleasing a crowd is a measure of success, then this adventure was well worth the effort.

Lessons learned: homemade pasta makes a ton of difference, so I will make it again when doing lasagna.  Over time, I’m sure it will be easier for me.  Also, for a richer lasagna, I will double the proportion of ragù to Béchamel sauce.

0 thoughts on “Lasagna Bolognese from Scratch”