As I think I have mentioned, my husband Tawn reverted to part-time work several months ago in order to return to school.  He is studying fashion design, something that has long been an interest of his and he is now exploring whether it could be more than an interest.  Family members and friends have been asking what he has been up to in his studies, so now that his semester midterms are over, he has graciously given me permission to share his progress with all of you.

The assignment in his “Collections 1” class was to create a fall collection of six looks that were strongly influenced by 1960s silhouettes and futurism and based on an astrological theme – the planet corresponding to your sign.  For the midterms, Tawn needed to share a mood board, technical drawings, illustrations, and a sketch book.  What follows are a look at the mood board, illustrations, and the six outfits. 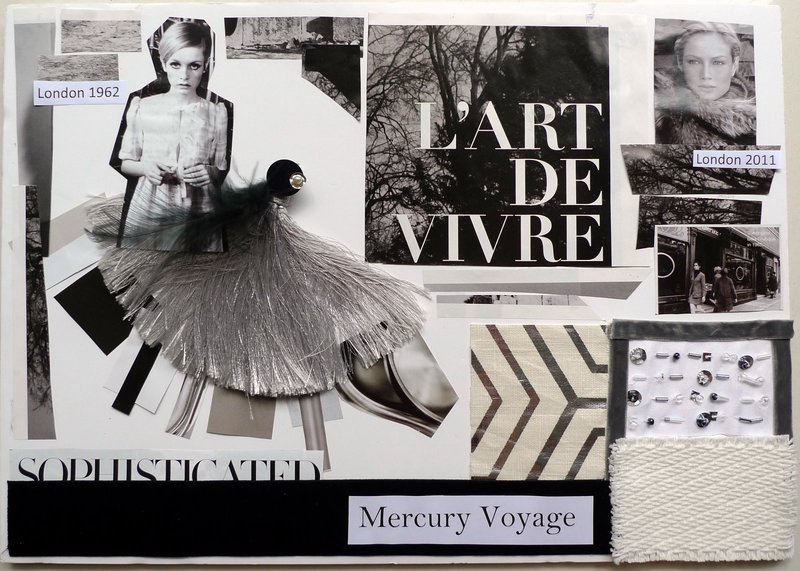 The sketch book, not shown here, is a tool the designer uses to capture ideas and inspirations as he or she goes about daily activities.  That gets translated into a mood board, the purpose of which is to communicate colors, pictures, fabrics, textures that will inform the collection.

Tawn’s sign is associated with the planet Mercury, and as he viewed the planet he was inspired to look at “futuristic” as it was seen during the 1960s.  His influences included the famous model Twiggy, fabrics in neutrals such as black and white, with soft touches from tassels, silk, and feathers. 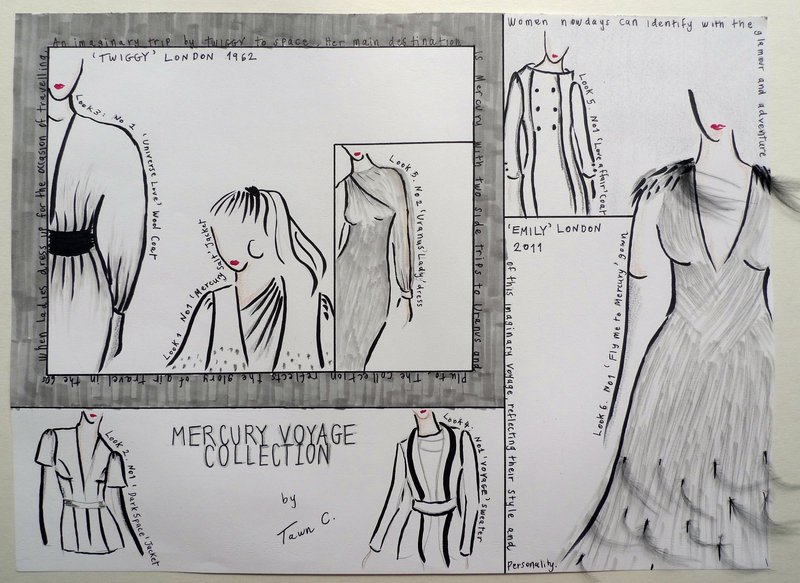 This is the illustration that shows the overall theme of the collection.  You can see there are a variety of jackets, blouses, and an evening dress.  The purpose of the illustration is to communicate the larger vision of the project in a more concrete way.

As part of the project, he had to identify who he was designing for.  Who is the woman who would buy his clothes?  This was easy for him to understand because as a public relations professional, he is used to defining target audiences for his clients’ campaigns.  In this case, the target woman was an urban professional in her 30s living in London.

Since a collection should tell a story, Tawn created an imaginary story of two women taking a voyage to Mercury with side trips to Uranus and Pluto.  These were analogies to the experiences his target customer would have – working a long day in an office and then having to go out for dinner or a night on the town, wearing outfits that could effortlessly be adapted to the different environments.

Six outfits emerged from this story: 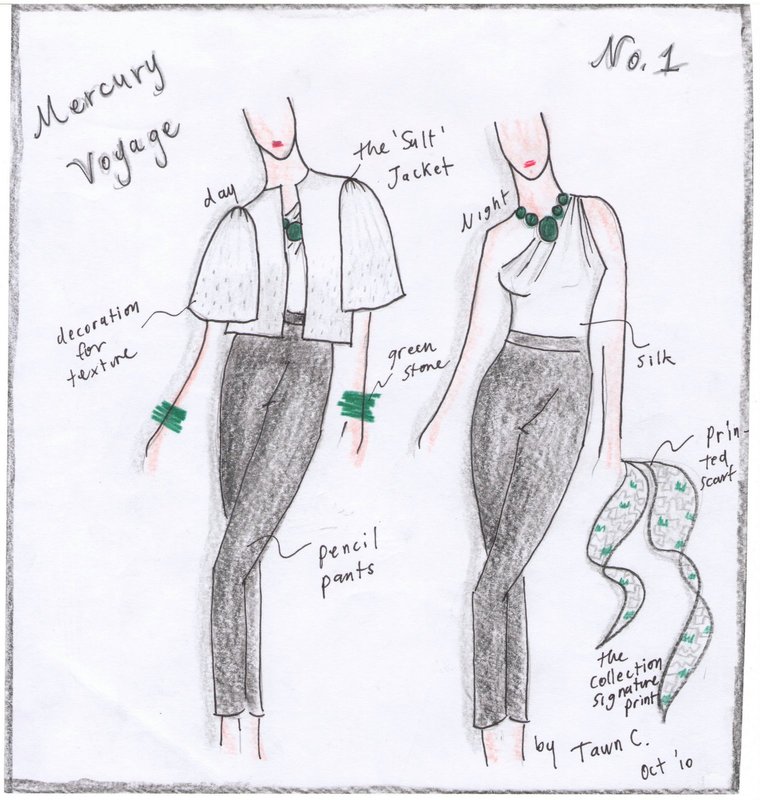 Outfit Number One – This is the outfit that Twiggy would wear while traveling to Mercury.  The pencil pants provide comfort while the jacket provides structure.  The key piece is the bell-sleeved jacked with a texture that is similar to coarse salt to add visual interest.  The one-shoulder blouse provides a modern look and glamor that is revealed when the jacket is removed.  The scarf has a signature print that appears throughout the collection, suggestive of the hidden life that may lie underneath Mercury’s cold and dry exterior. 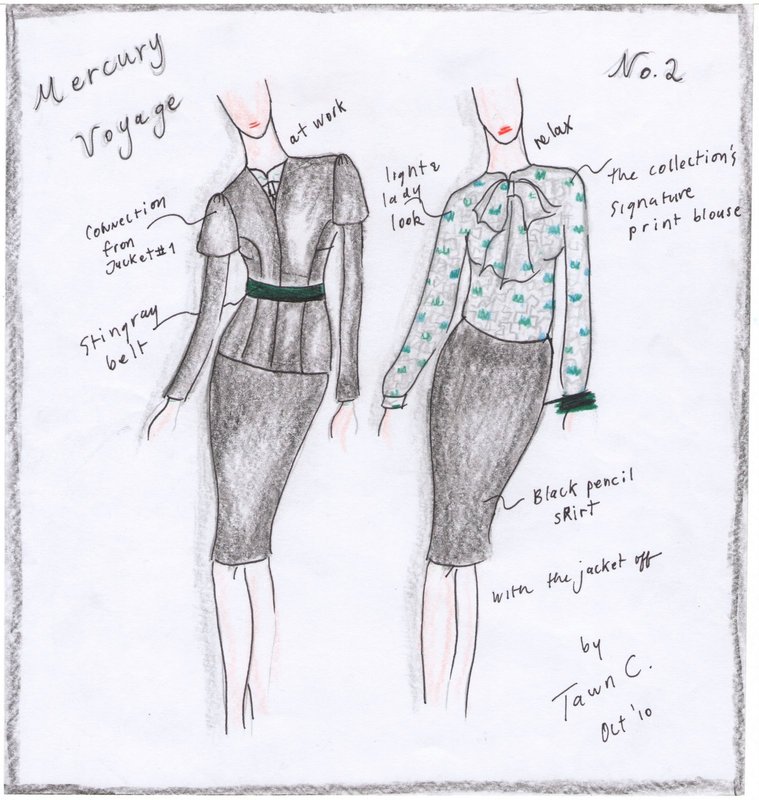 Outfit Number Two – For women who have to go out to work and meetings, they need something that looks elegant and formal – clean cut lines with a black jacket and pencil skirt.  The blouse, done in the signature print, is very 60s secretarial with a feminine bow.  The jacket sleeves, while smaller than the ones on the first outfit, still have a distinctive bell shape.  The look is accessorised with a dark green stingray belt and dark green jade bracelets. 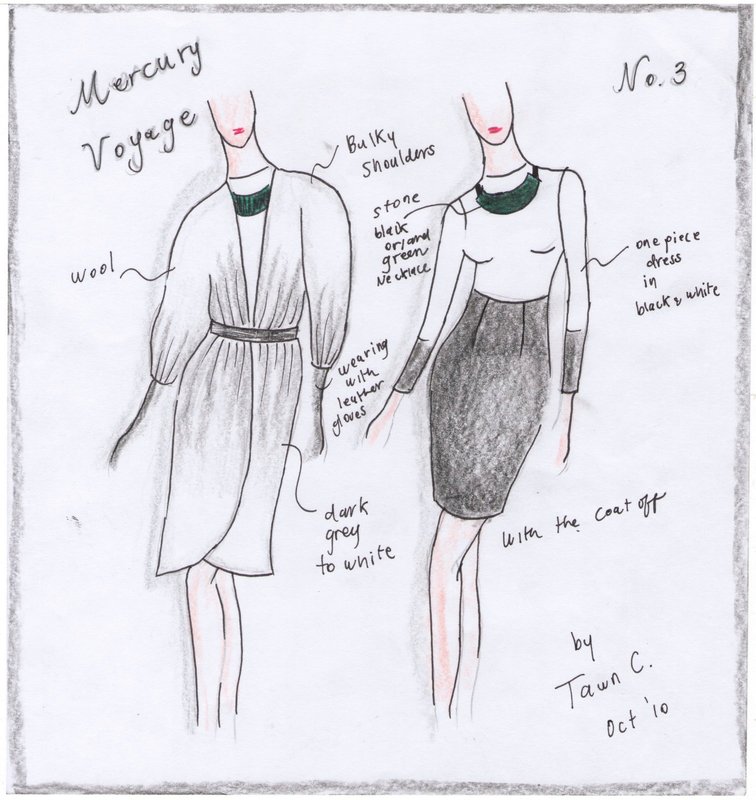 Outfit Number Three – The bell shape theme continues but expands to the entire shoulder of a wool jacket gathering in pleats around the waist.  It is a gradient from white to light gray around the waist and then back to white at the hem.  The one-piece dress underneath is a comfortable but well structured Cashmere wool with a three-quarter length sleeve.  The accessory is a dark green jade breastplate necklace. 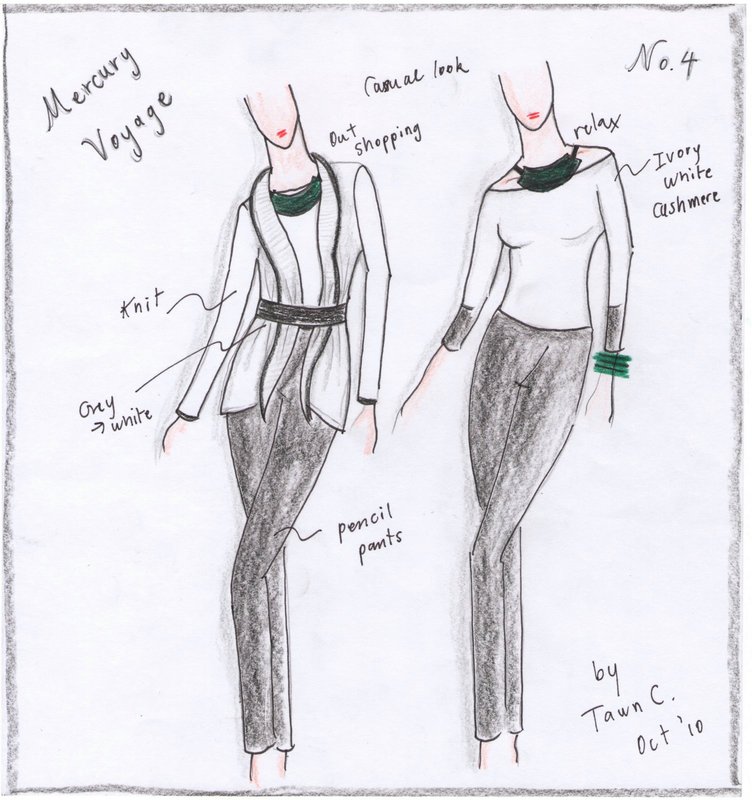 Outfit Number Four – The look becomes more relaxed, something she would wear for Sunday brunch before heading out to an afternoon excursion.  The knit sweater has a shawl-like collar, bulky and comfortable.  The top is similar to the one-piece dress in the previous outfit but with a wide collar that shows the tops of the shoulders. 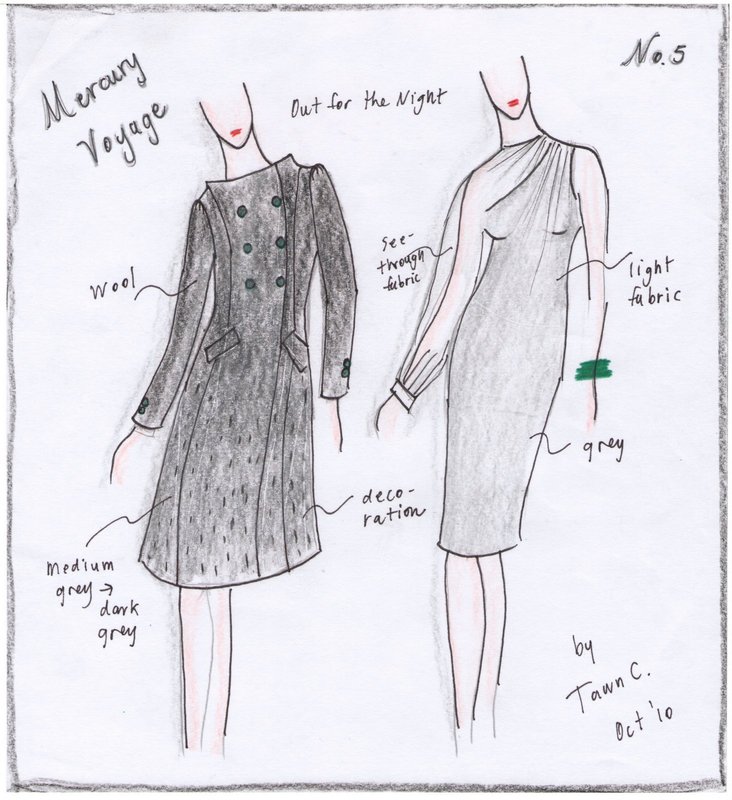 Outfit Number Five – This is the transition to evening wear, a cocktail dress that sees the one-shoulder dress return with an integrated single-sleeve mesh blouse.  The wool jacket is inspired by Jackie O, lined with silk and decorated with the salt texture but done in medium to dark gray. 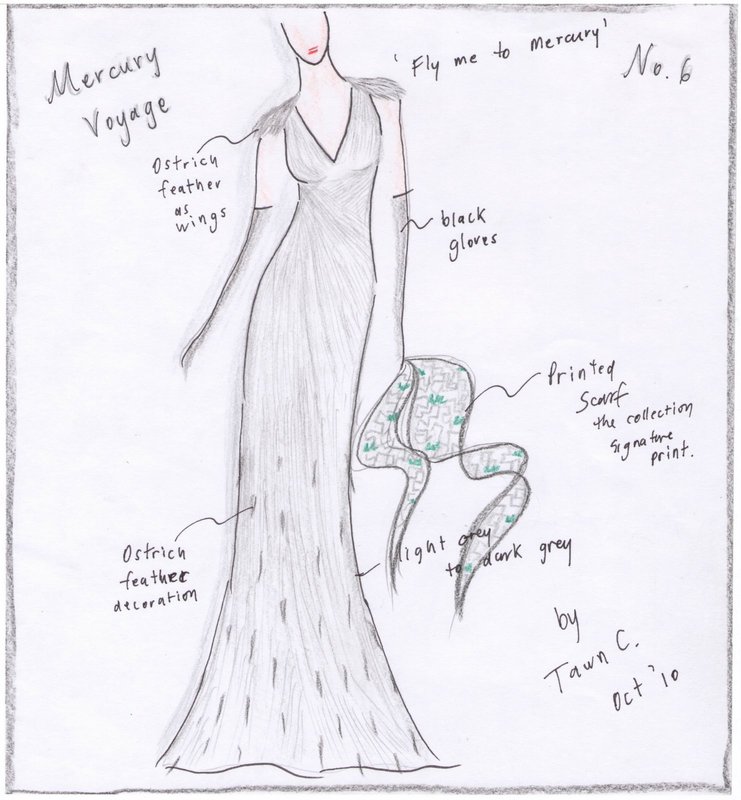 Outfit Number Six – The final look is a formal evening dress, called “Fly Me to Mercury”.  Decorated with ostrich feather epaulets as well as ostrich feathers on the lower portion of the skirt, this dress is elegant with small pleats on the torso that spread out to follow the silhouette of the body.  Long gloves and the signature print scarf complete the look. 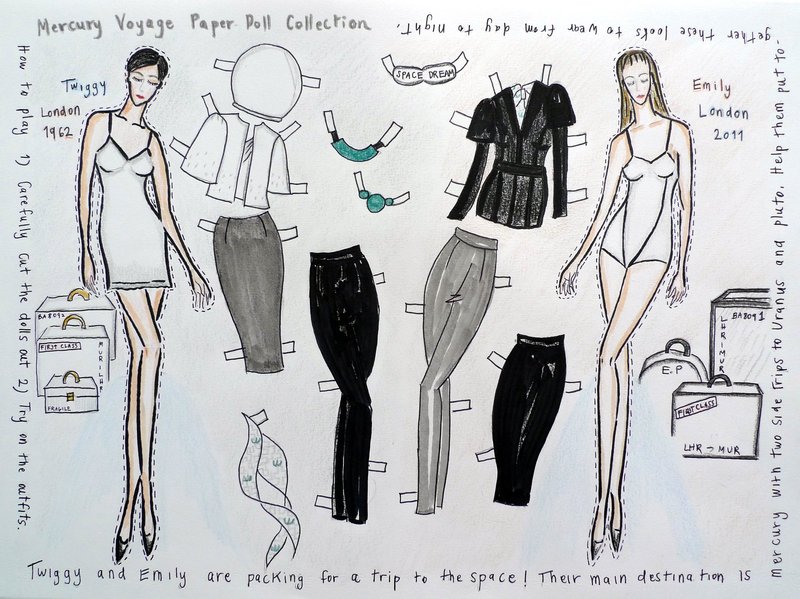 The final two illustrations were additional graphics Tawn created to present to his class.  He wanted to convey the collection in a lighthearted way, playing off the idea of paper dolls from the 1960s. 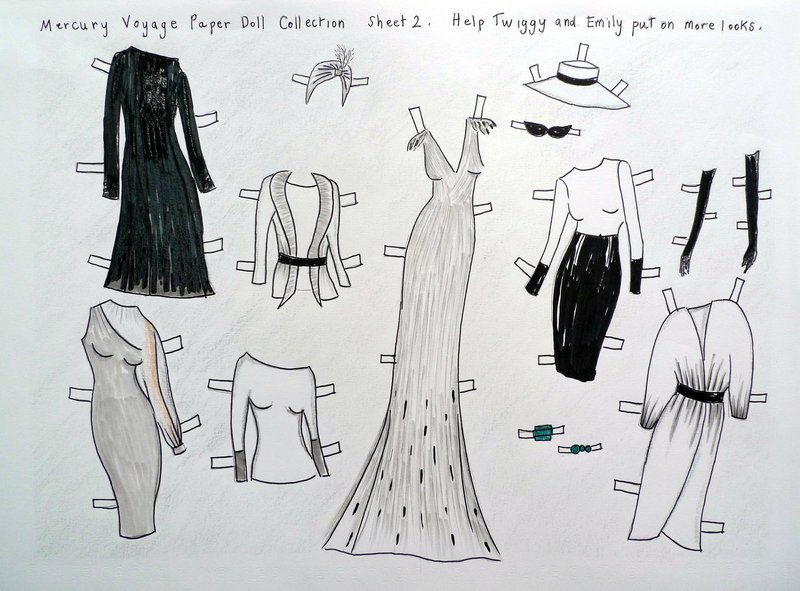 The story is of his muses, Twiggy and Emily, taking a voyage to Mercury.  He could see this concept being used in a magazine photo shoot, a whimsical way to present the collection.

So that is what Tawn has been up to.  Now, if we can scrape up $2,000 or so, he could actually make prototypes of these outfits.   Well, we’ll wait until his pattern-making class is complete!