Before heading to Kansas City and the craziness that two young nieces can create, I drove north to Omaha for two days of acclimating to the American Midwest with Andy and Sugi.  (Better pics of the events on Andy’s blog.)  Since we first met a year ago when we were in the Omaha area for our wedding, Tawn and I have enjoyed having the opportunity to see Andy and Sugi several times, including in Taiwan last November.

Thursday evening shortly after I arrived, we headed out to Shucks Oyster Bar and Fish House to join Sugi’s sister, brother-in-law, and niece for Thursday Fish Taco Night. 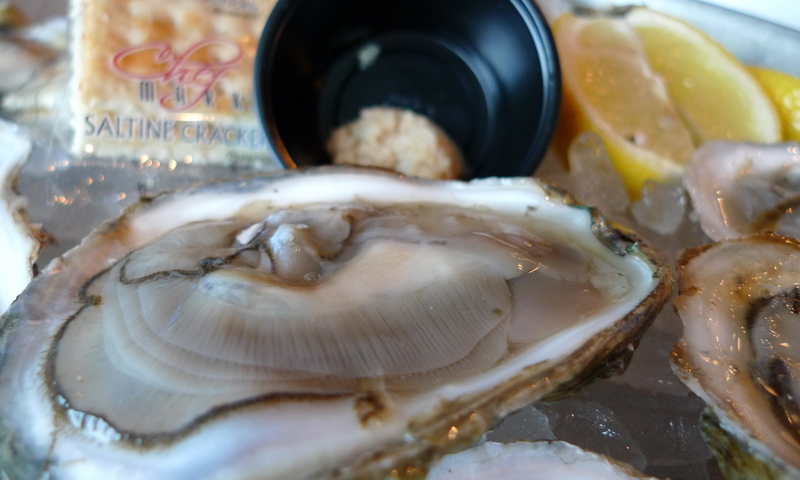 A dozen oysters on the half-shell.  Delicious. 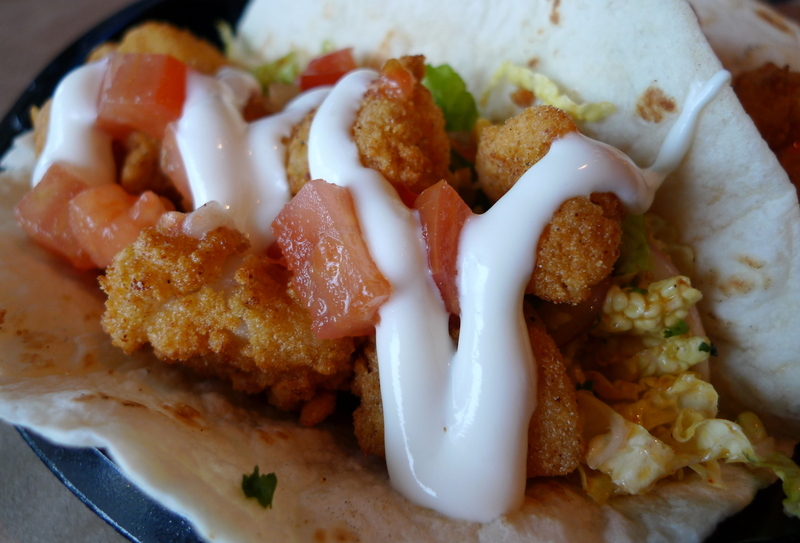 Fried fish tacos (also fried shrimp tacos) had a nice batter with just a hint of spice.  Different from the Baja-style fish tacos that I’m used to from San Diego, these were very tasty, too.

Thanks to a Tylenol PM, my second night in the US was a good one, sleeping straight through for about seven hours.  Sometimes I find that the best way to fight jet lag is to beat it into submission with some medication.  Sugi and Andy had both taken Friday off from work and we had a full day planned.  But first, some breakfast. 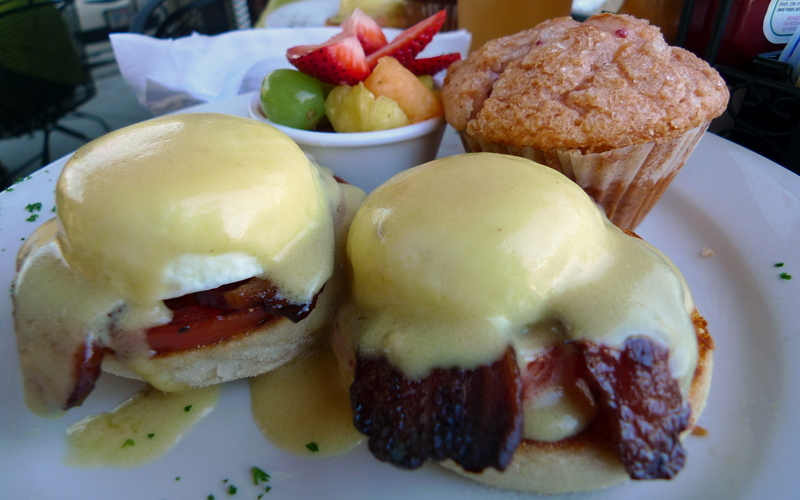 Baily’s restaurant specializes in Eggs Benedict, including this type with a slab of tomato and thick slices of smoked bacon.  The eggs were perfectly cooked with a firm white and a golden liquid yolk. 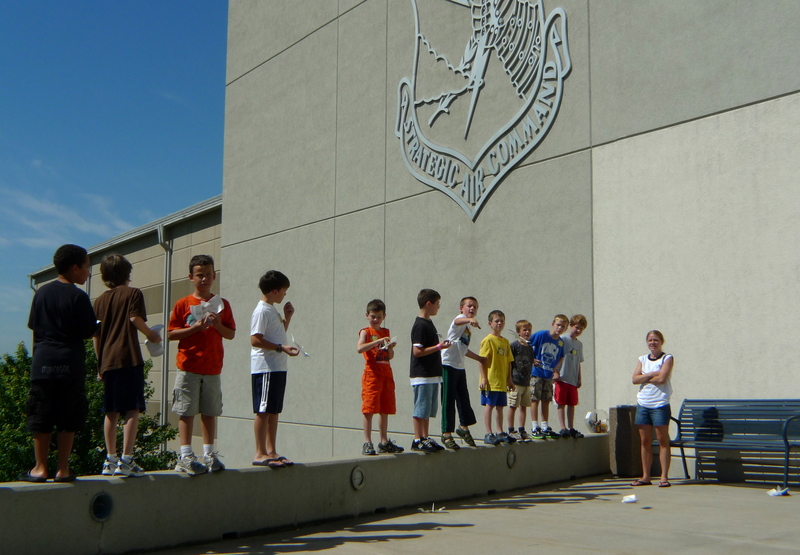 Our first stop was the Strategic Air and Space Museum a few miles west of town.  The museum focuses primarily on the history of the Strategic Air Command (SAC), the operational establishment in charge of America’s land-based strategic bomber aircraft and nuclear missiles until 1992, after which a military reorganization led to the closure of SAC.

As an aviation enthusiast, I found the museum very interesting.  Even people who aren’t so interested in aviation – Sugi, for example – enjoyed the visit as we went on a docent-led tour with Bob, a former Korean War pilot who had a wealth of information and a cute sense of humor. 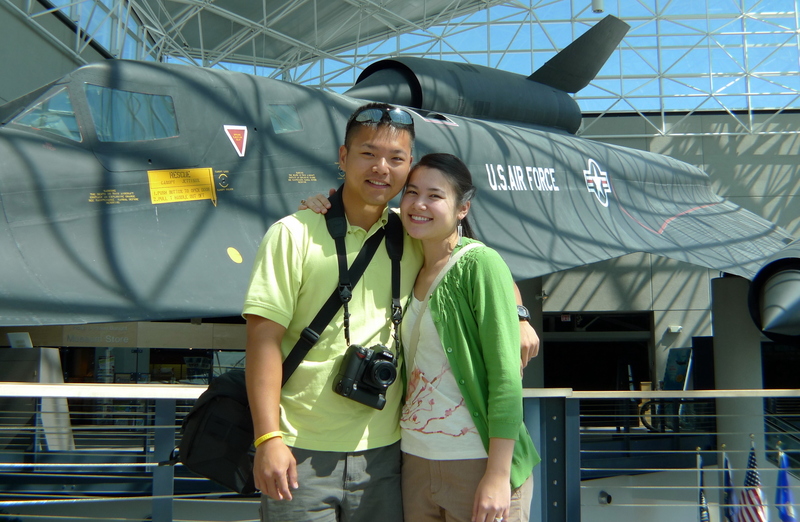 Andy and Sugi in front of the SR-71 Blackbird spy plane which is dramatically displayed in the museum’s entry lobby.  The museum has two hangars with about two-dozen aircraft displayed, many of which have been expertly restored.

C-47 Skytrain, the military version of the classic Douglas DC-3 passenger aircraft.  Over 10,000 were built for World War II and General (later President) Eisenhower identified the C-47 as one of four pieces of equipment critical in winning the war.  The other three were the jeep, the bazooka, and the atom bomb.

B-1A Lancer – This bomber was actually one of four prototypes built to test all of the systems before full production of the bombers – redesignated the B-1B – began. 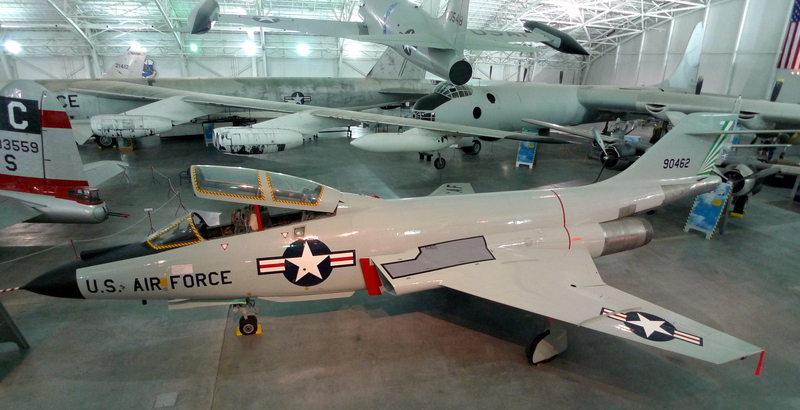 F-101B Voodoo – an all-weather fighter/interceptor designed to protect America from incursions over the North Pole from Russia.  Was also operated by the Canadian Air Force.

B-17G Flying Fortress – A heavy bomber that was critical to America’s success in World War II.  More than 12,700 were made and more than 4,700 were lost in combat missions. 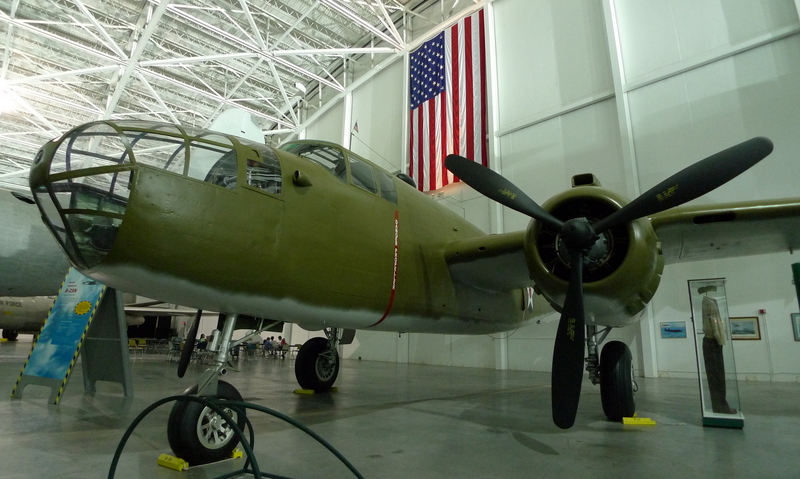 B-25N Mitchell – A medium bomber that was made famous by Doolittle’s Raid on Tokyo, a 1942 surprise attack by 16 B-25 bombers launched from an aircraft carrier hitting five cities in Japan.  The success in this attack helped lift the sagging American morale in the wake of Pearl Harbor and damaged morale of the Japanese civilian population, who had been told that their homeland would never be reached by bombers. 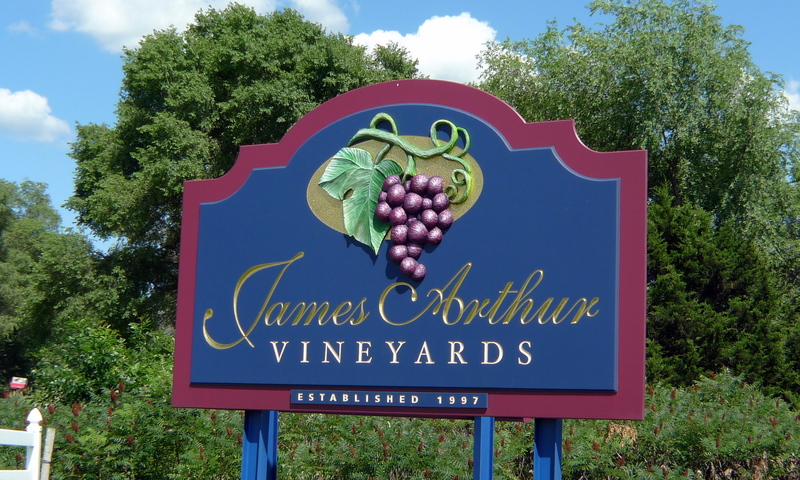 After a few hours at the museum, including a disturbing special exhibit about the Nazi’s eugenics experiments and extermination programs, we drove further west to Lincoln and visited the James Arthur vineyards.  Yes, wine in Nebraska! 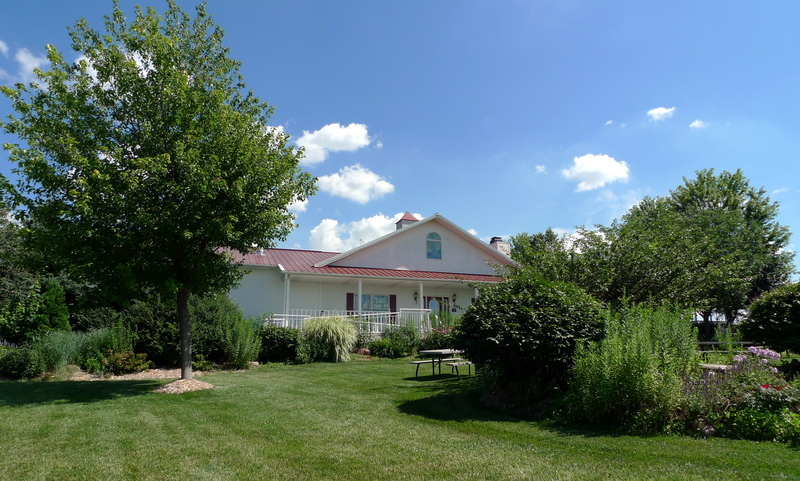 The tasting room (and the winery behind it) is located atop a small hill with a cute garden around it, the perfect place for an afternoon tipple. 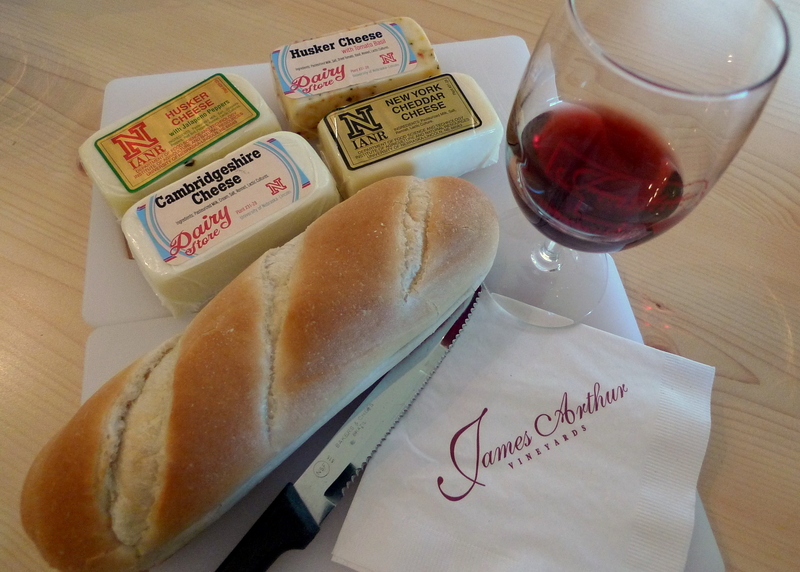 We tried tastings of a half-dozen different wines along with a sampling of local cheese produced by the University of Nebraska’s agricultural department.  The best of the James Arthur wines were the semi-sweet whites, the grapes of which are well-suited to this climate.  The reds were not as good.

Beautiful skies and rolling fields of corn and soybeans lent a pastoral look to the passing landscape.

After the wine tasting we drove to Sugi’s parents’ house on the north side of Omaha.  Sugi’s sister was celebrating her birthday and I was fortunate enough to be invited along.  They live on 20 rural acres with a sweeping view of the countryside. 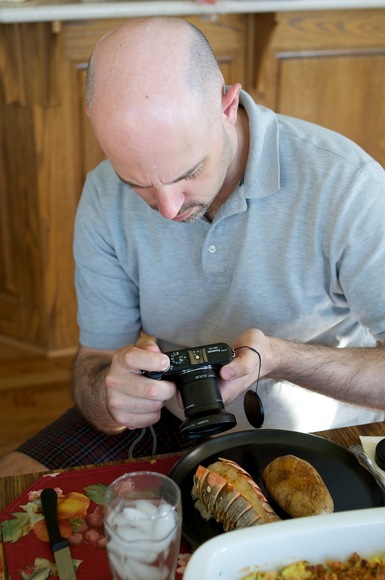 Sugi’s mother prepared an elaborate dinner including baked lobster tails, grilled beef teriyaki, and clams boiled in a garlic-sake broth.  She didn’t want any pictures taken, but Andy and I both managed to snap a few shots. 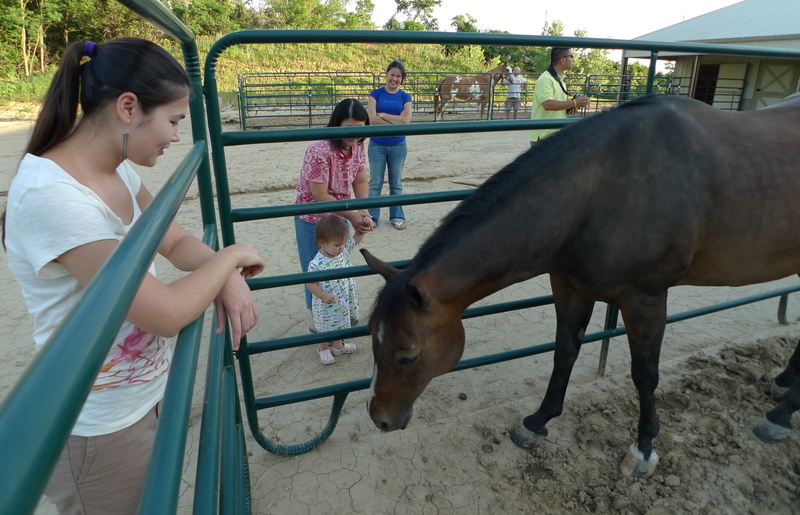 Sugi’s mother is passionate about horses and has two that she trains and shows.  Taylor, her niece, loves the horses and they seem equally fond of her, following her from the barn to the exercise yard.  They probably know that she usually comes bearing carrots! 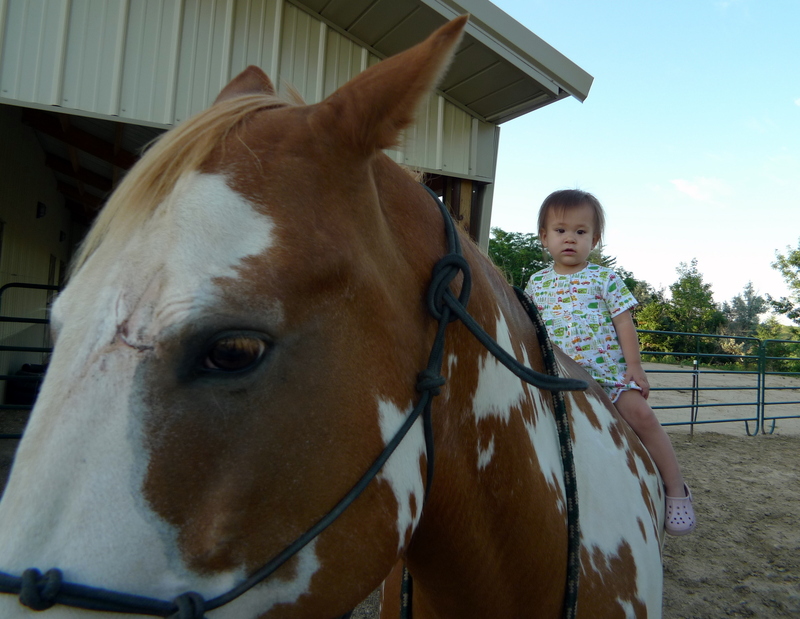 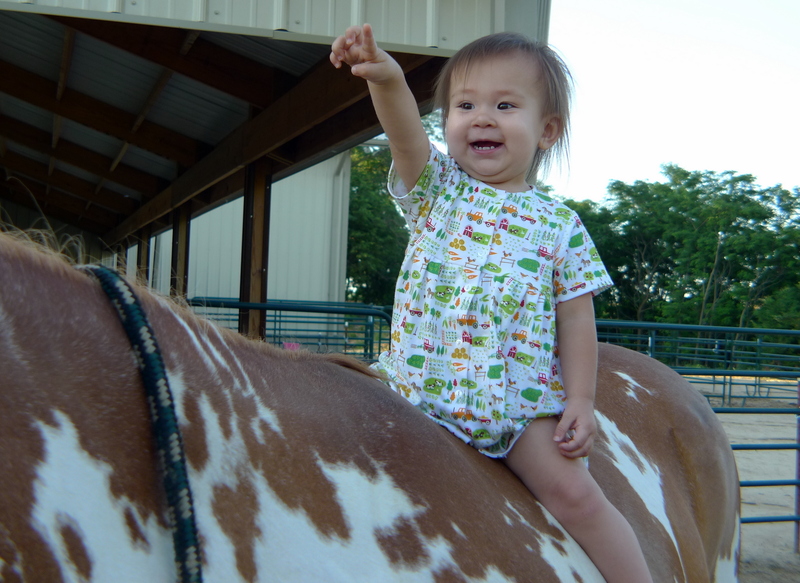 Cowgirl Taylor is eager to ride the open range. 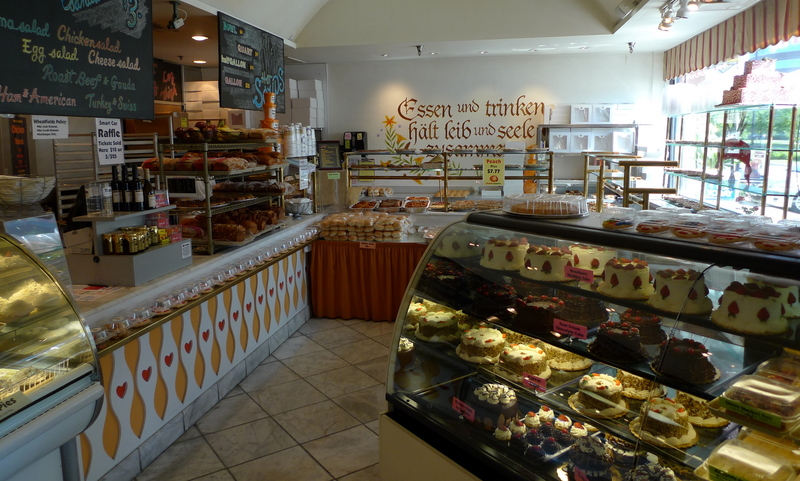 Sunday morning after another relaxing night’s sleep Andy, Sugi, and I went for breakfast at WheatField’s, a local chain of German bakery restaurants.  The selection of baked goods was overwhelming.

The cute indoor patio seating area, which was a bit over air-conditioned. 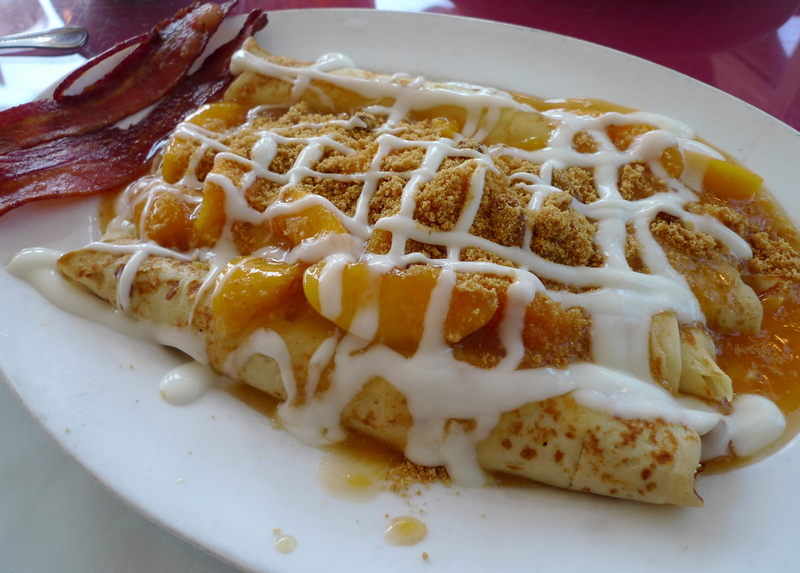 Wanting to enjoy some fresh seasonal fruit I had the peach crepes for breakfast.  As pretty as it looks, the dish was a little disappointing.  The flavor was very one-dimensional and about one-quarter of the plate would have been more than enough.  The yogurt they drizzled on top wasn’t substantial enough to add anything to the overall flavor. 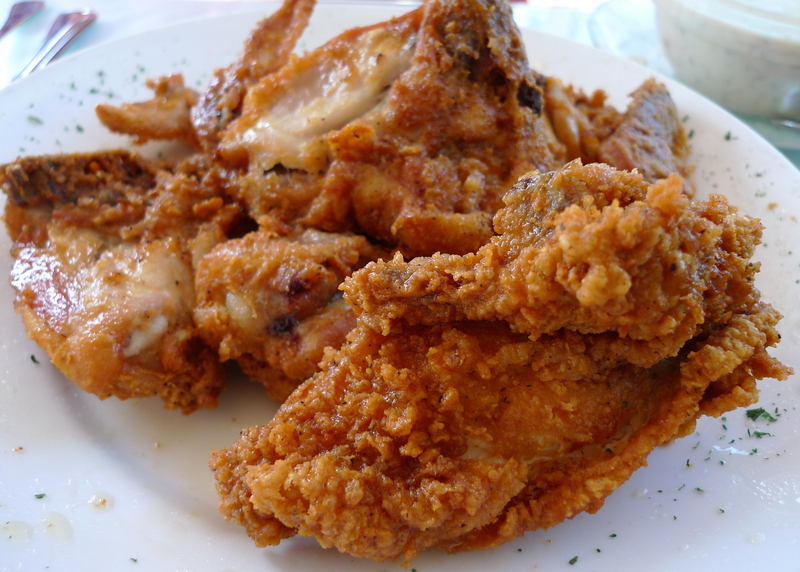 Andy ordered a seven-piece serving of Ron’s Honey-Drizzled Fried Chicken.  It was really well-prepared and the honey does add a nice touch.  You’ll be glad to know that Andy did take a few pieces home. 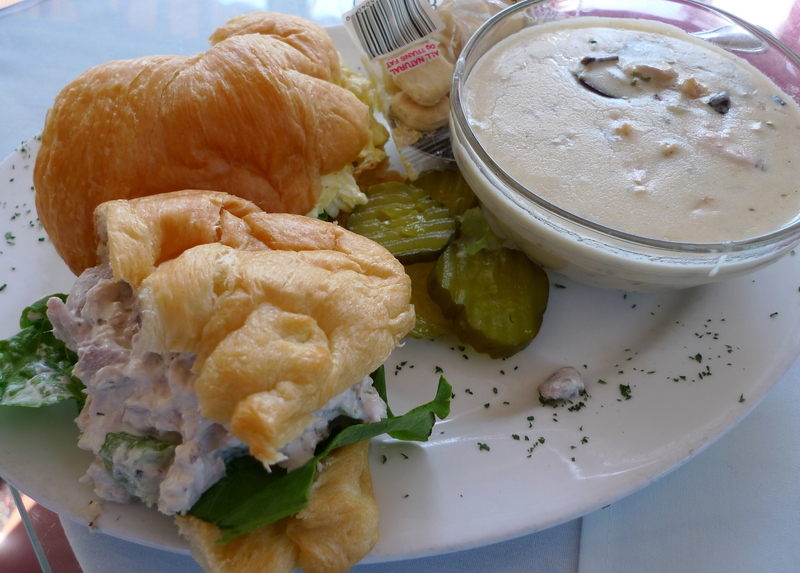 Sugi’s choice was probably the best – half egg salad and half chicken salad with a side of homemade chicken mushroom soup.  You can tell how cold it is in the dining room by noticing that a skin was already forming on the soup’s surface.

After that filling breakfast I hit the road for the three-hour drive back to Kansas City.  Thanks again to Sugi and Andy for a wonderful start to my visit.