The family of one of Tawn’s university friends owns a famous seafood restaurant in Chonburi province, about a 90-minute drive southeast of Bangkok.  In all the years he has known her, Tawn has never been down to visit the restaurant.  A few weeks ago we decided to finally accept the friend’s offer and drove to the restaurant.  It was, to say the least, a seafood extravaganza. 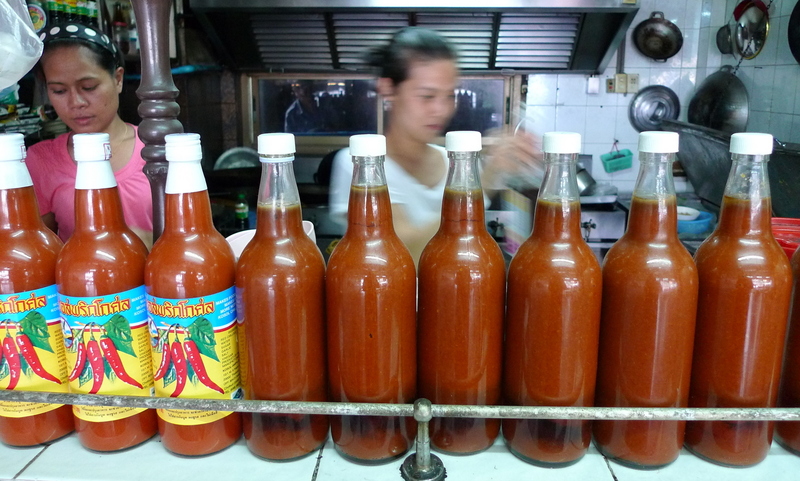 The unassuming restaurant is in a busy market area near the Gulf of Thailand.  An open-air shop house, the restaurant looks like it has been there for ages, which it has.  It is clean but not fancy.  The counter between the kitchen and the dining area is lined with bottles of their homemade chili sauce, a Warhol-esque decorating statement.  Large photos of the dishes on the menu line the walls. 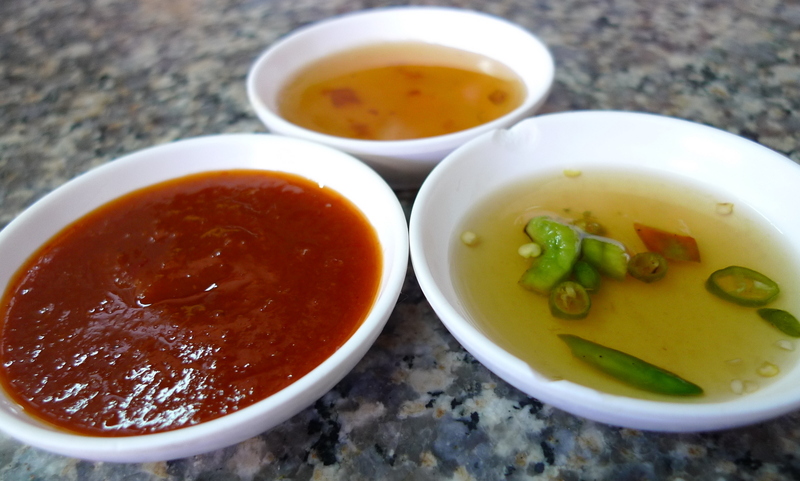 The first thing to be placed on the granite tables are a trio of sauces: the homemade chili on the left, a sweet “plum” sauce in the back, and a fish sauce with chilies.  The small green chilies in the fish sauces are called prik kii nuu in Thai – literally, “mouse shit chilies”. 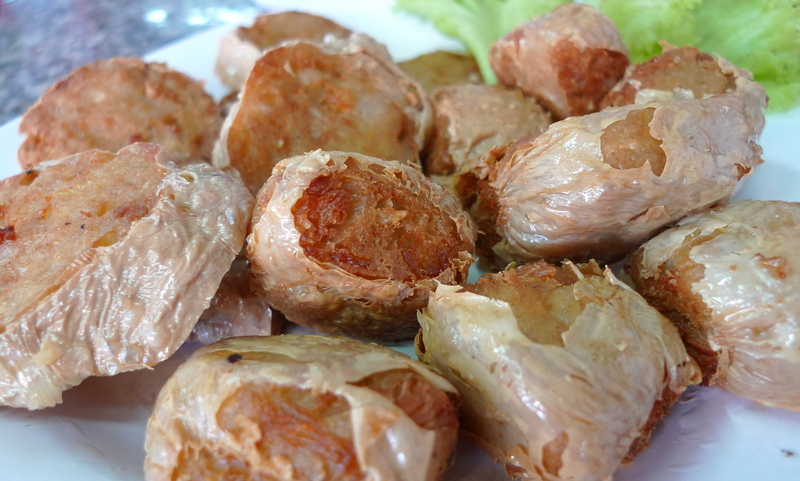 The restaurant’s specialty is a kind of seafood sausage, if you will.  It comes in two types: Hoy jaew is the round one, and is made of crab meat; Hae gun is the flat one and is made of shrimp.  Both are wrapped in tofu skins and steamed then deep fried. 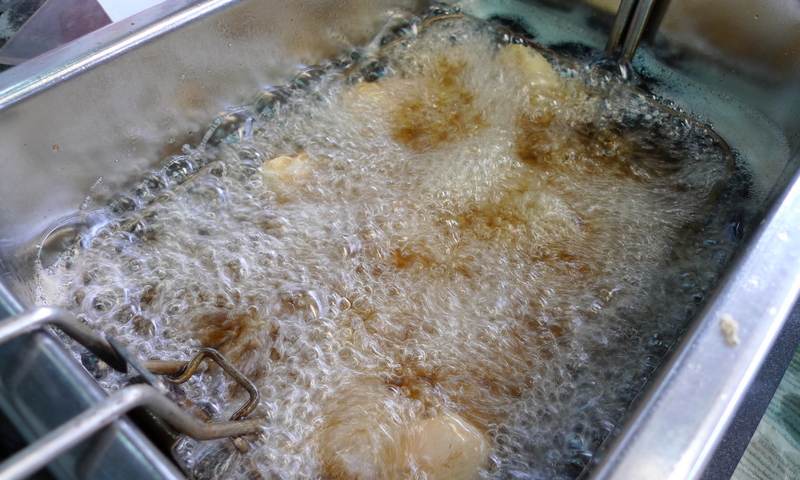 Another batch almost ready to come out of the deep-fryer. 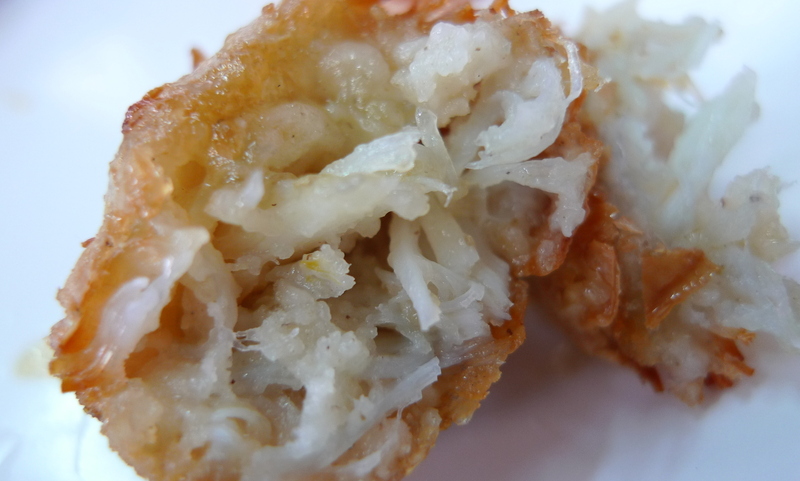 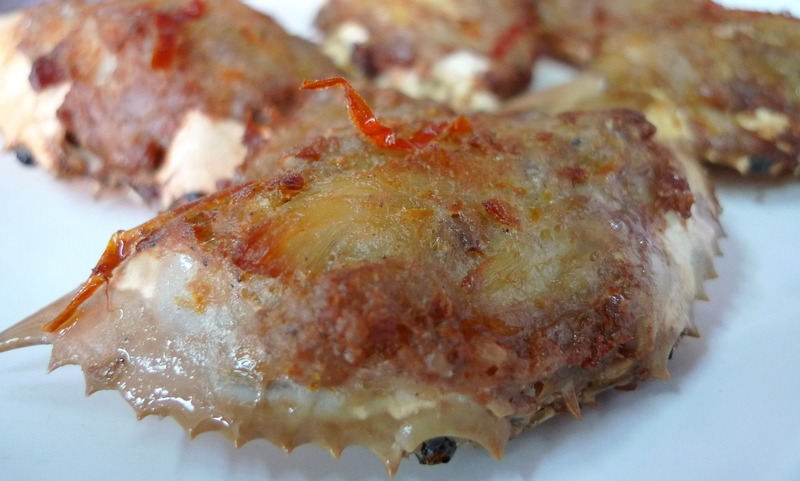 Another menu item the restaurant is famous for is the bpuu jaa – crab shells stuffed with a mixture of crab meat and pork, then fried.  The flavor is especially good at this restaurant because they mix the meat with coconut milk. 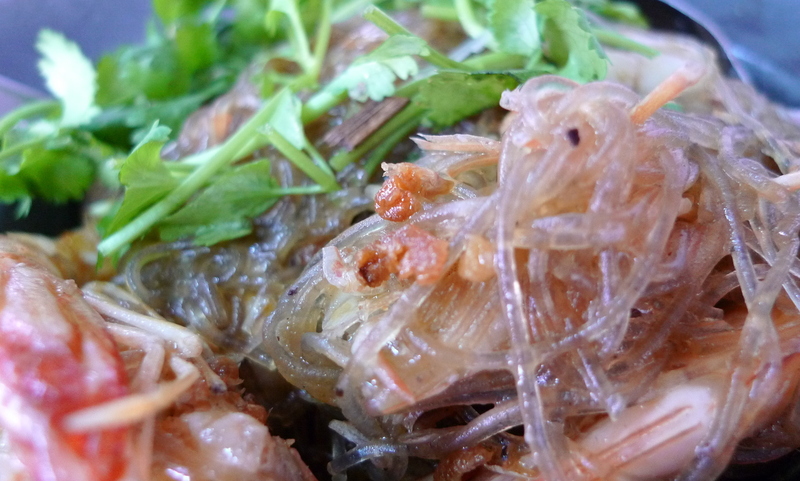 Goong ob wuun sen – baked vermicelli with prawns with a sauce made from oyster sauce, cilantro, and ginger.  The secret ingredient is pork fat, which lines the clay pot to prevent ingredients from sticking while the dish is baked.  As it is served, the dish is stirred and the melted pork fat is distributed over the noodles, which absorbs it.  Yummy! 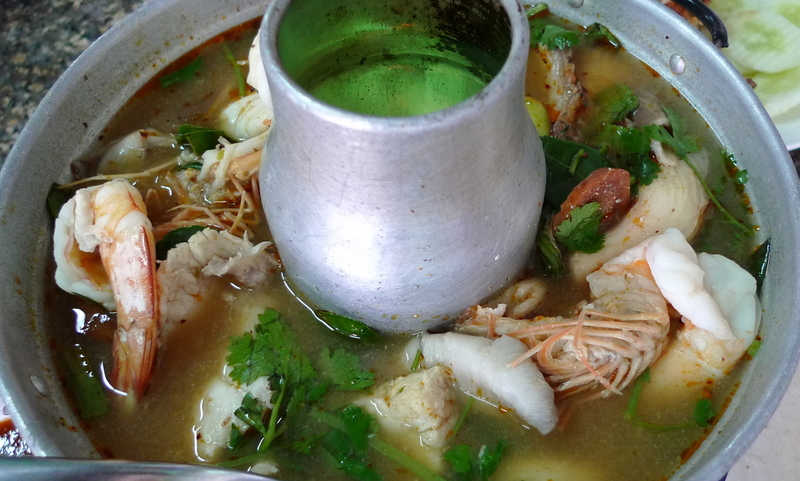 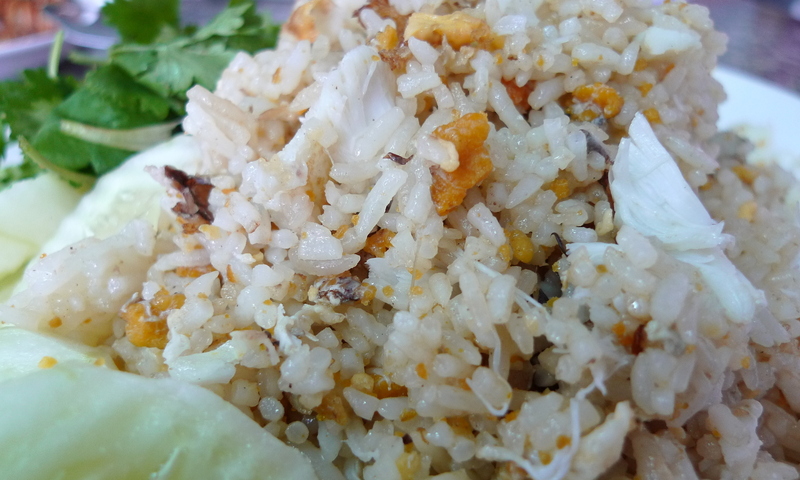 Khao pad bpuu – Stir fried rice with crab meat.  The owner spoiled us by making it stir fried crab meat with a little bit of rice in it.  Tasty! 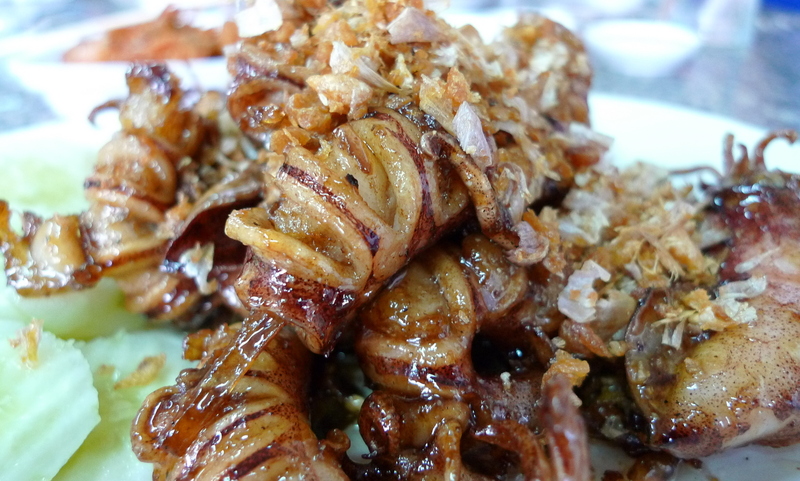 Plaa muk kai tod gratiam – Young squid that are filled with squid roe, fried in a sweet sauce and topped with fried garlic. 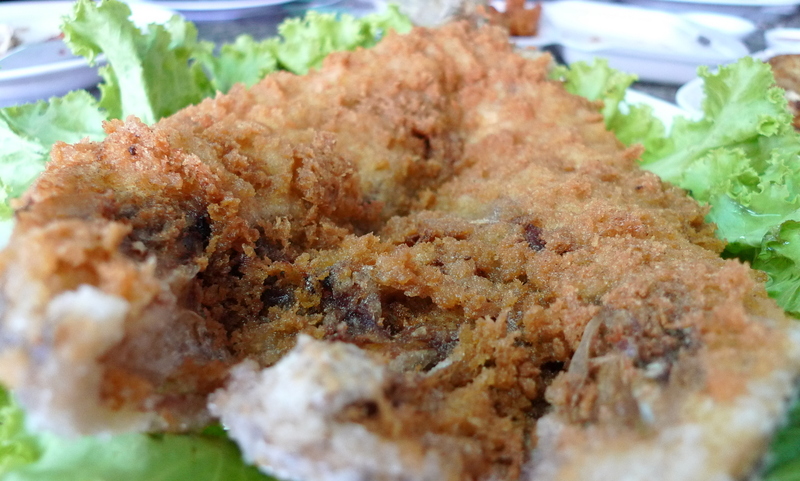 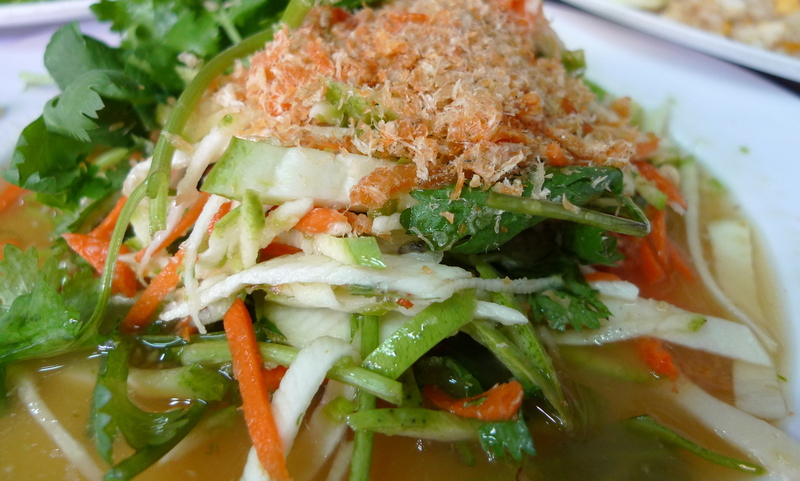 and topped with yam mamuang – a sauce of green mango, carrots, cilantro, chilies, and dried shrimp mixed with fish sauce and lime juice.  Perfect with the fish and not as spicy as you might expect. 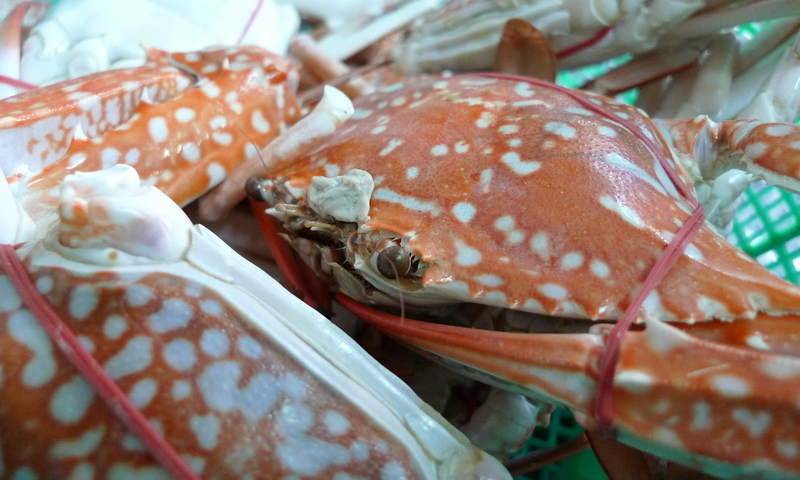 The star of the show, a basket of steamed crab! 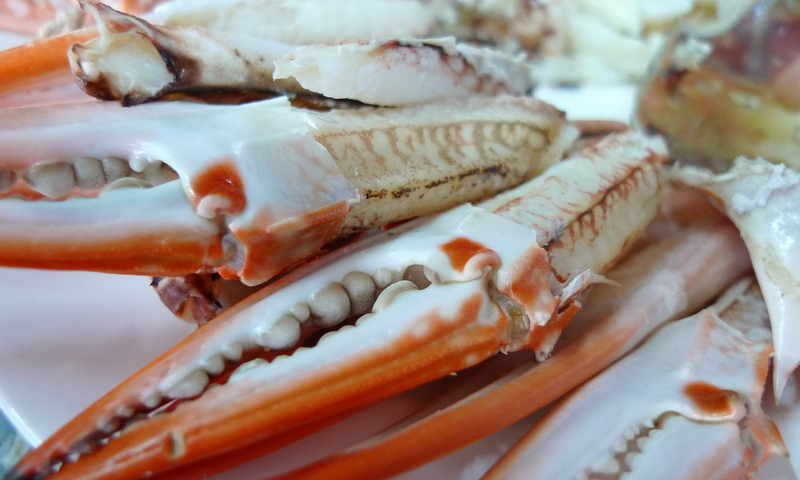 The mother of Tawn’s friend as an expert at cracking and peeling crab.  She sat there at the table and opened a half-dozen crabs for us, making the choice bits easily accessible.  Normally, crab is something I won’t bother with if I have to peel the shells and pick out the meat myself because it seems more work than it is worth.  But with an expert peeling them – well, I’m all in! 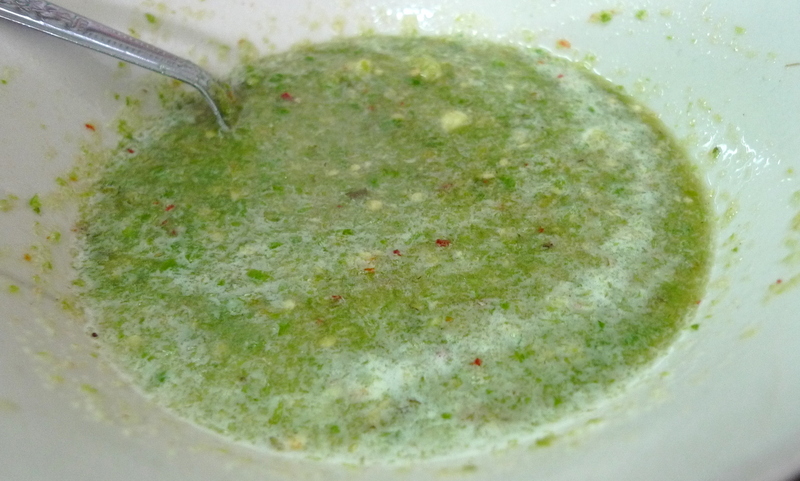 Sauce of death!  Chilies (loads of the “mouse shit” variety) blended with lime juice, fish sauce, and not much else.  This is super spicy.  And really good with the crab meat. 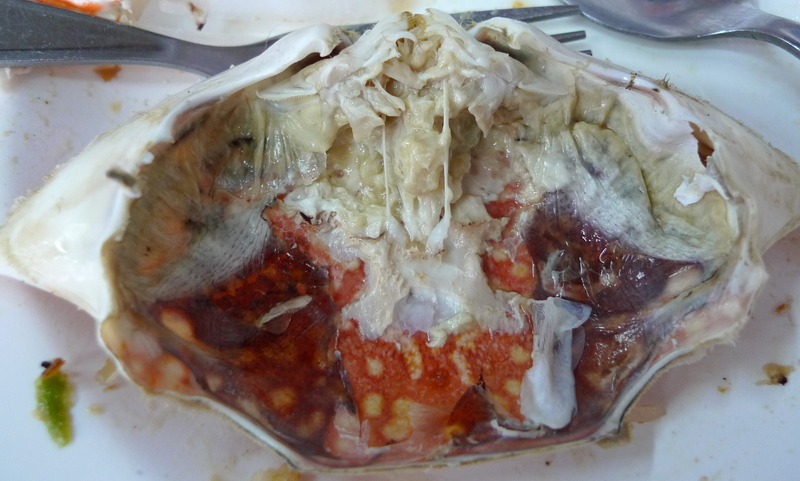 The strange interior membrane of the crab, which I was encouraged to try. Very astringent, briny flavor and not something I’ll have again. 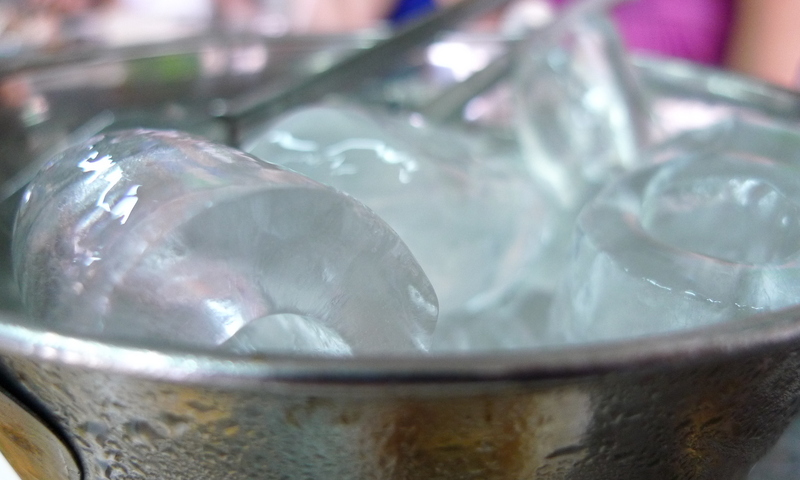 For the most part, the food wasn’t very spicy but was really tasty.  The sauce for the crab, though, is just spicy.  There’s no two ways about it.  This required a lot of water with lots of ice to cool down the mouth!

Growing up in the US, I didn’t eat a lot of seafood while I was growing up.  I only came to appreciate it once I started having really fresh seafood prepared in simple ways that emphasize the freshness and flavor of the meat.  Needless to say, this restaurant reinforced all the great things about seafood. 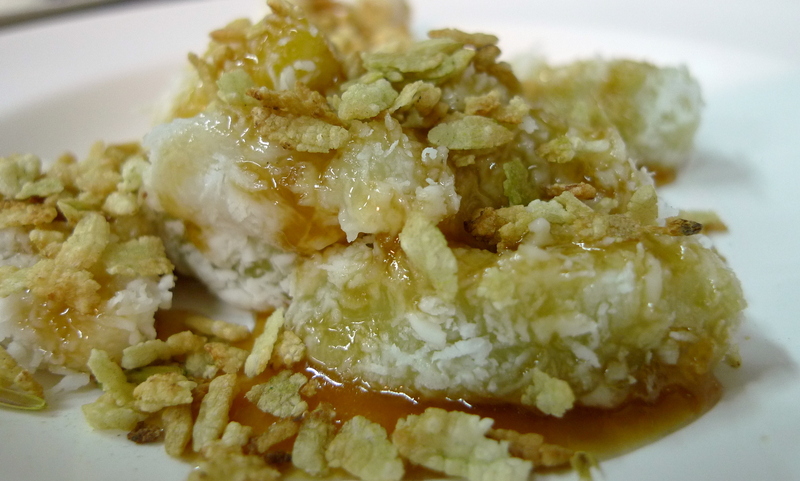 After lunch we strolled around the local market.  I’ll share those photos tomorrow.