Krungthep is awash in restaurants started by youngish members of high society who have a fair amount of cash, lots of ego, and little to no experience running restaurants.  Heck, many of them wouldn’t even qualify as foodies.  So a few weekends ago I was a bit apprehensive when trying out a new French restaurant in the Thong Lor neighborhood called 4 Garçons.

Located on Soi Thong Lor 13 in the warren of small alleys that lead to Samitivej Hospital, 4 Garçons occupies a generous space on the ground floor of the recently-opened Oakwood service apartments.  The four young men referred to in the restaurant’s name are four yuppie friends (guppies, too?) who decided their interests in food and wine should be expressed through the opening of a restaurant.

It turns out that one of the partners, the one who seems to be managing the front of the house, is the friend of a friend of our dining companions for the night, Ben and Jason.  And the partner who is overseeing the kitchen is a doctor that Ben knows from Brumrumgrad Hospital.  As Jason observed, it is odd to see your doctor in a chef’s outfit working in the kitchen.

In talking with the manager, he explained that the doctor loves to cook as a hobby and throw dinner parties frequently, which was their point of inspiration to go into business together.  Somewhere (maybe in Bourdain’s Kitchen Confidential?) I recall reading that being good at hosting dinner parties is not the same as being a chef.

Nonetheless, 4 Garçons manages to effectively avoid the curse of most of these hi-so hobby restaurants: lackluster food.  The food at 4 Garçons was well-prepared and tasty, if somewhat lacking in distinctiveness. 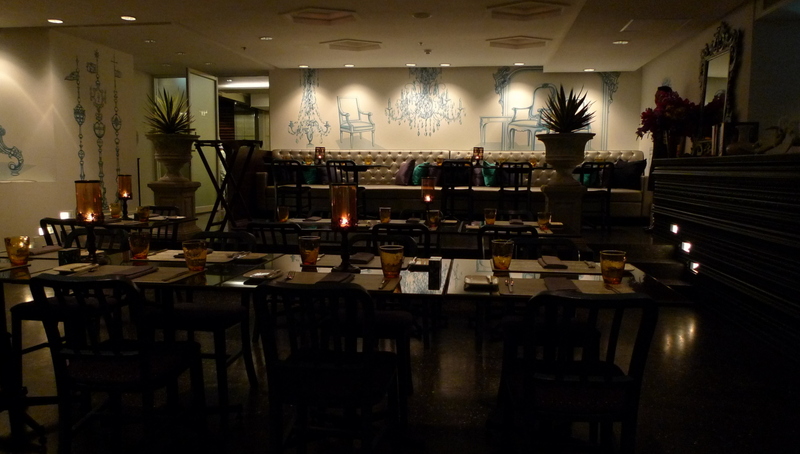 The interior of the space isn’t its strong suit.  Another of the friends – maybe he’s an architect? – did the interior design. 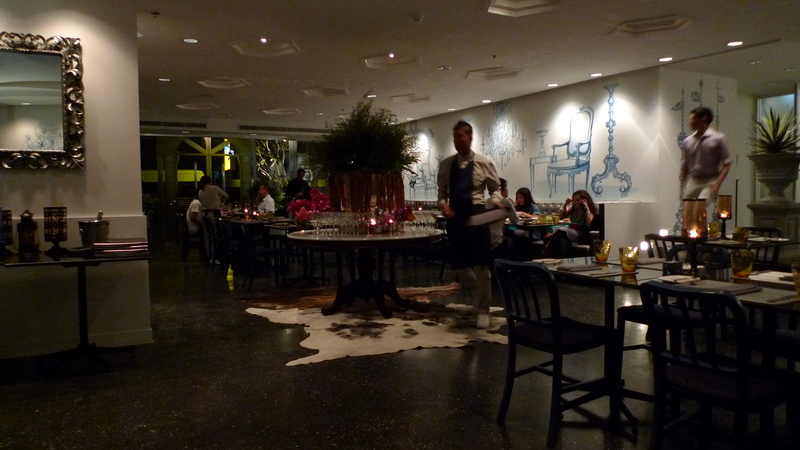 The space feels too open to be a nice brasserie and too cold to be a comfortable bistro.  Some furniture (shelves?  counters?  plant stands?) could have broken up the space more effectively, avoiding the long row of tables seen in the first picture and the large open areas that feel conspicuous.  Maybe this has to do with the “see and be seen” desire of Bangkok hi-so diners, for whom a more closed, intimate space would have minimized face time.  Thinking of other local restaurants like Extra Virgin, though, I think the interior could be improved by breaking it up a bit.  Tawn wasn’t keen on the murals, either. 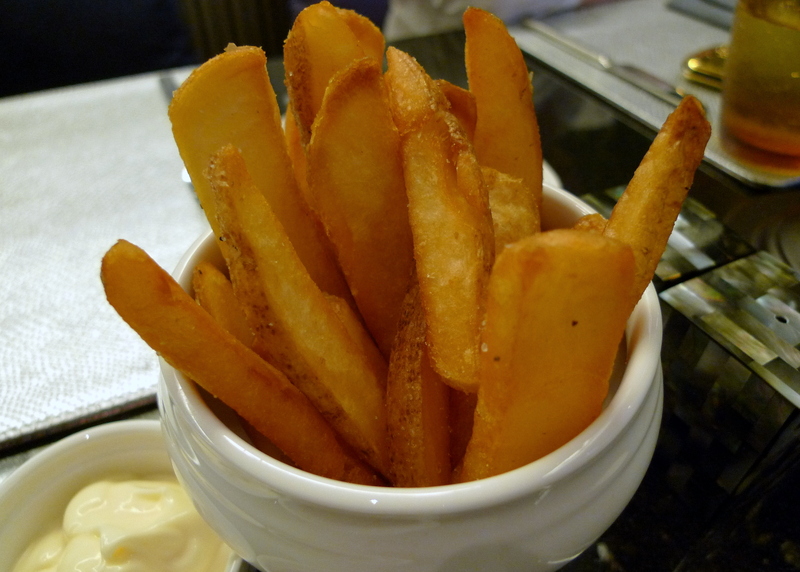 It seems that an order of fries is brought out as an amuse bouche.  Steak cut fries seem oddly un-French to me but they were really nice, crispy on the outside, tender on the inside, not greasy at all.  Maybe it is a break from the shoestrings frites one expects at a French restaurant, but it is a welcome break. 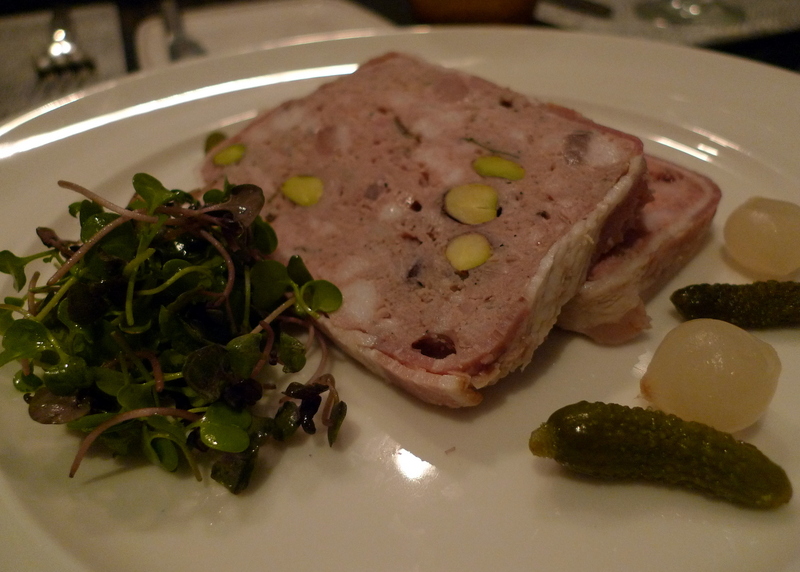 Jason, Tawn, and I ordered some appetizers to kill the hour or so before Ben was able to join us from work.  We ordered this house-made pate, which was really tasty.  I keep asking myself why I don’t make pate at home.  The answer is probably because I don’t have a food processor.  But it isn’t that difficult to make and it reminds me of my days as a young child eating Triscuit crackers and Oscar-Meyer liverwurst for lunch with my paternal grandparents. 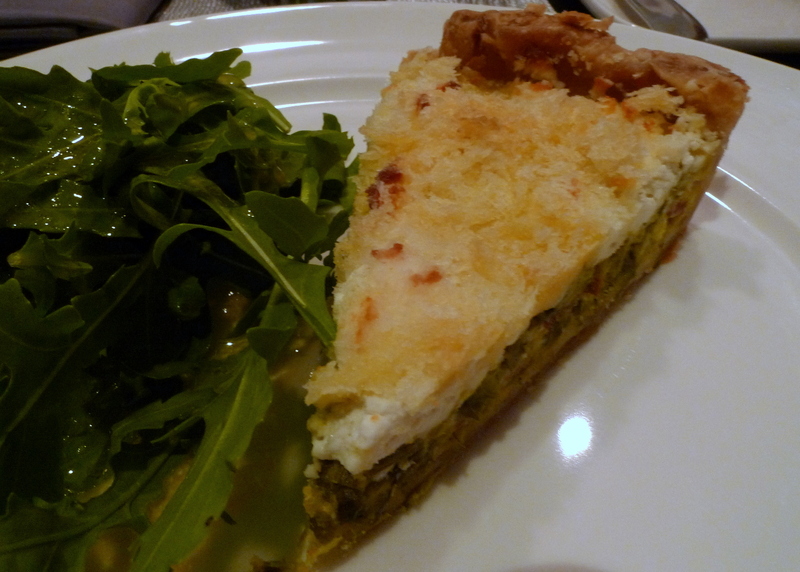 A goat cheese tart with mixed greens was another nice appetizer.  Lots of onions and very tasty. 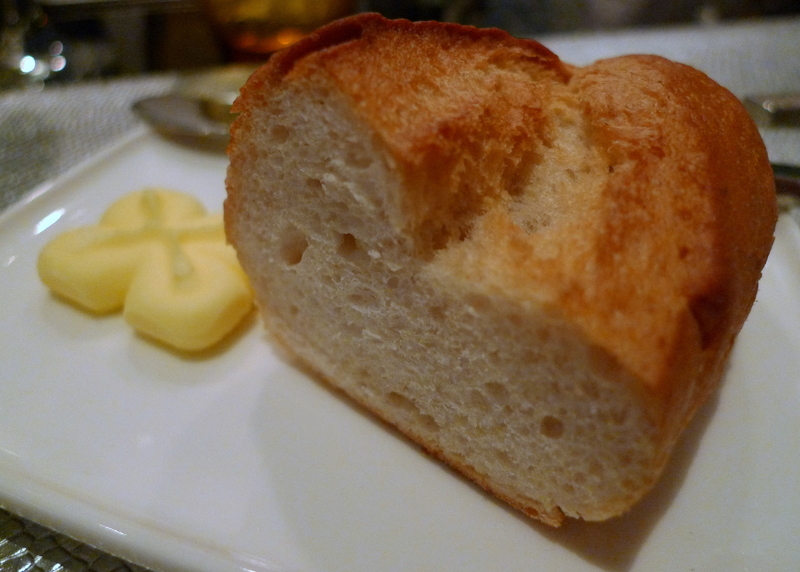 I assume the bread was not baked at the restaurant although it was pretty good quality and it was generously provided. 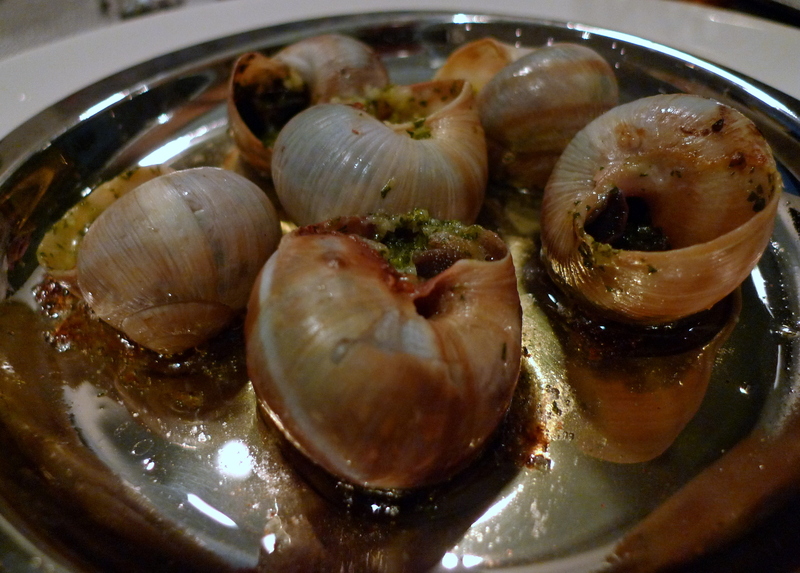 Service is friendly and attentive, if a bit uninformed.  Basic questions like “What’s the soup of the day?” required a pop into the kitchen by the order-taker to answer.  It seems like the first lesson from Waitering 101 that you would know that type of information before approaching a table.

After Ben arrived we placed our orders.  The menu covers all the usual suspects of French cooking without any specific regional focus or stylistic emphasis. 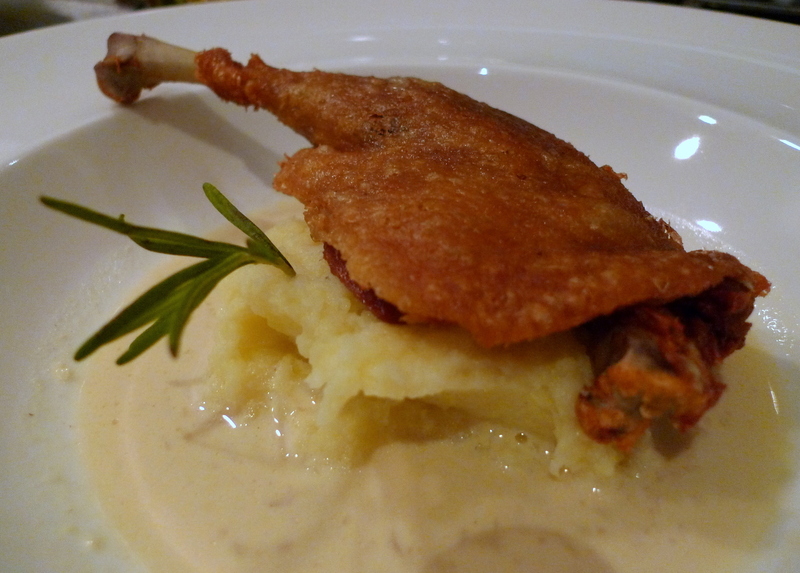 One interesting thing was the availability of duck confit two ways: one prepared in duck fat for 6 hours, the other for 12 (if I have my numbers right).  The second one, which Tawn ordered, was saltier than normal and had a “gamey” flavor.  It was  quite good with a moist interior and crunchy exterior and was worth coming back for. 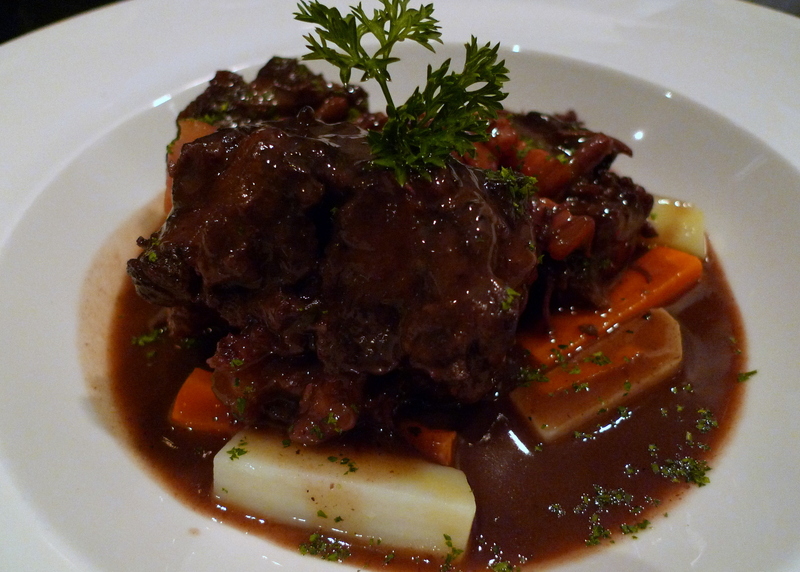 Ben had the beef stew, which was flavorful and very tender. 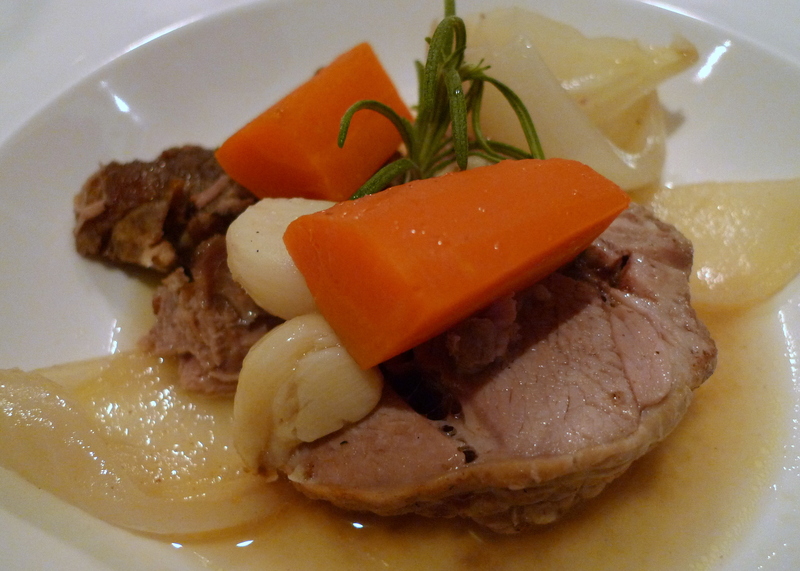 I had the lamb shoulder, which was also tender and flavorful although it had sort of a “one note” nature to it and could have used something – a few olives, maybe? – to distinguish it. 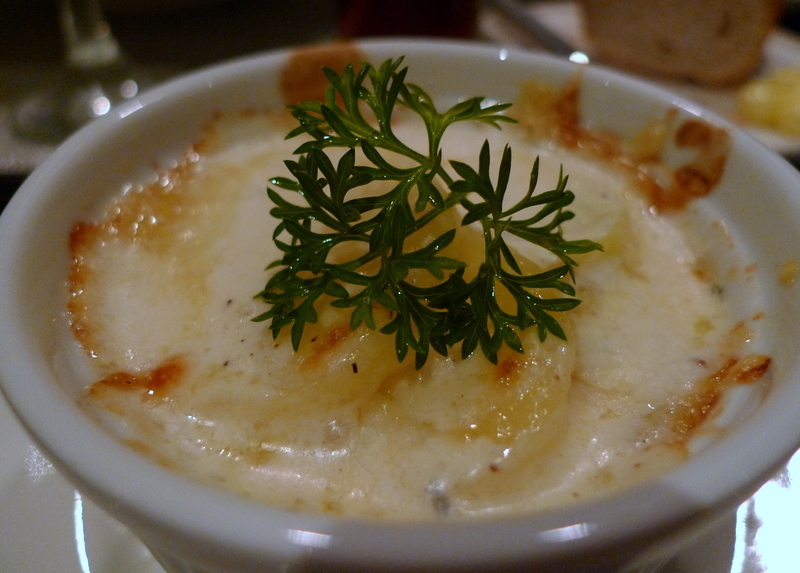 The lamb came with a side of potatoes au gratin, which were tasty but a tad undercooked. 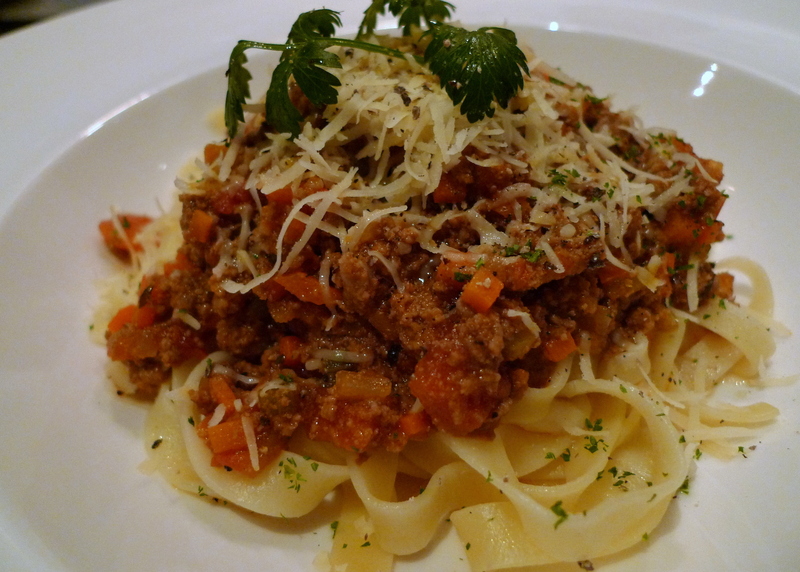 Jason settled for the not-very-French choice of pasta with a meat sauce, which he seemed to enjoy.

Getting pretty full, we managed to find room for a little bit of dessert, just so there would be pictures to post on my blog.  (The things we do for you… ha!) 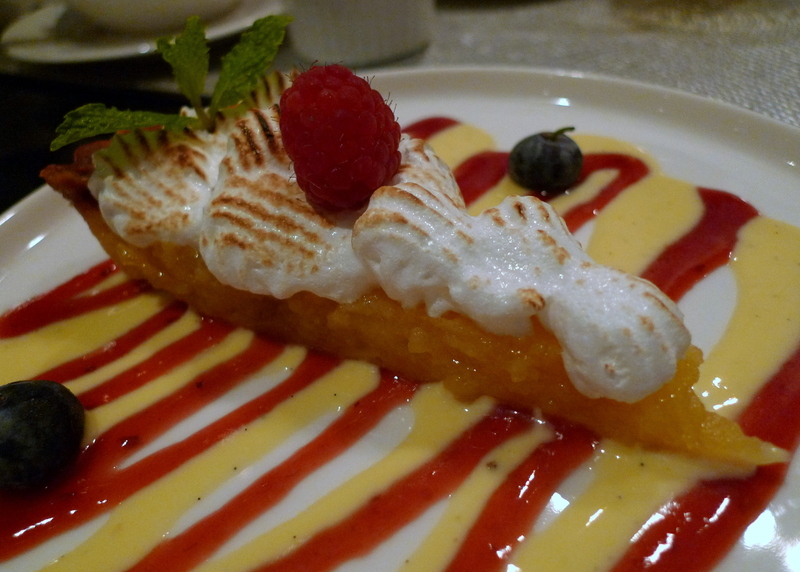 Tarte au citron – lemon tart.  The lemon curd was lumpy and uber-sweet without any hint of tartness that makes for a great tarte au citron.  A little over-sauced, too.  We couldn’t bring ourselves to finish this, one of the rare occasions when I leave a dessert unfinished. 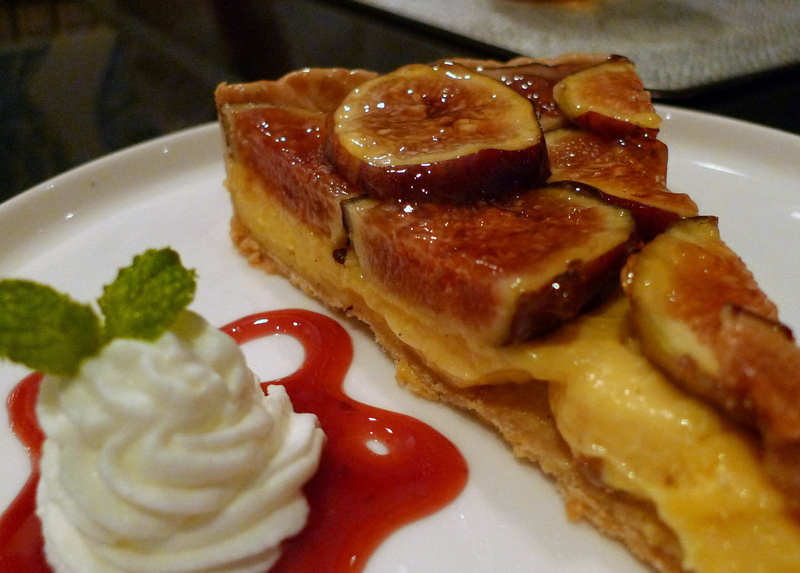 A fresh fig tart was was a pleasant find on the menu, something you don’t see often.  The figs were lovely but the base of the tart didn’t add anything to them.  The amount of saucing was appropriate, though. 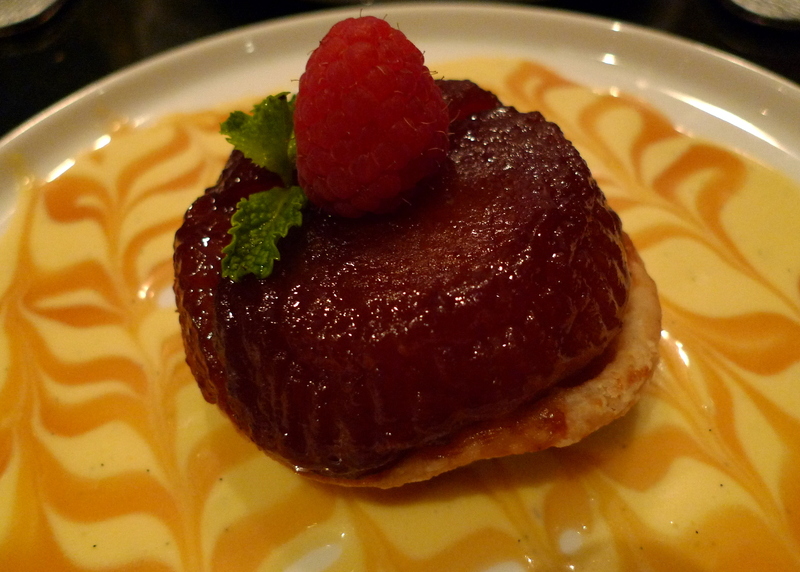 The best dessert was the tarte Tatin.  The apple was really lovely and had this luscious caramel flavor.  I’d go back just to order this dessert, despite it being lost in a sea of vanilla cream.  I wonder if a few grains of coarse sea salt sprinkled on top would have added anything to it?

Upon reflection, I realize what marks a major difference between “fine dining” restaurants here versus in the US (and, I suspect, many western countries).  The restaurants here seem to have little definable chef’s vision and the dishes come across pretty much as textbook examples of whatever cuisine they purport to represent.  It is as if the owner lays out a bunch of recipes and hires some cooks to prepare them – which is what happens at any restaurant – but in this case it seems that the owner either doesn’t put a unique signature on the dishes or else doesn’t ensure that the cooks understand more than just the technical steps for preparing the dishes.  In other words, there’s no passion behind the cooking.

For what it is worth, 4 Garçons serves up food that is well-prepared and tasty, even if the entrees do manage to arrive one at a time in Thai style instead of all at once as you would expect in a French restaurant.  If any of these dishes had been served to me at a dinner party (or had I served them at my own home) they would be very impressive.  Put into the context of a restaurant they are still good but fall a little shy of where they need to be in order to make a stand-out impression on diners.

For the price – about 500-700 baht (US$15-22) per entree – the food is a fair value for Bangkok fine dining.  When I factor in the ambience, which isn’t the restaurant’s strength, and the quality of the food, I would say that 4 Garçons is a “worth visiting” but not a “must visit” restaurant.  I’d like to make a return and see how things shake out as they get into their second month of operations, if for no other reason than to eat the tarte Tatin again!