After twenty days abroad, I am nearly home, sitting in the Taipei airport awaiting my flight back to Krungthep.  Every trip back to the US and return to Thailand provokes similarly moody thoughts: an awareness that the US doesn’t feel like home anymore and an equal awareness that as much as I like living in Thailand, that doesn’t quite feel like home, either.

Each trip back also produces a similar feeling of exhaustion, of trying to pack too much into the trip, trying to see too many people along the way and not even succeeding in that.  I could explore that issue more deeply but won’t get into it now.  I need, however, to take a trip to somewhere I don’t know anyone.

Thankfully, I did conclude the trip with this stop in Taipei, two nights and a day to wander around, explore the city, eat good food, and other than dinner with an old friend from San Francisco, have no commitments.  With the beautiful springlike weather, it was a much-needed relaxing end to the trip.

Instead of trying to recount my trip in detail, I’m going to share some highlight pictures.  I will, however, do some separate entries in the next few days about some of the meals we ate. 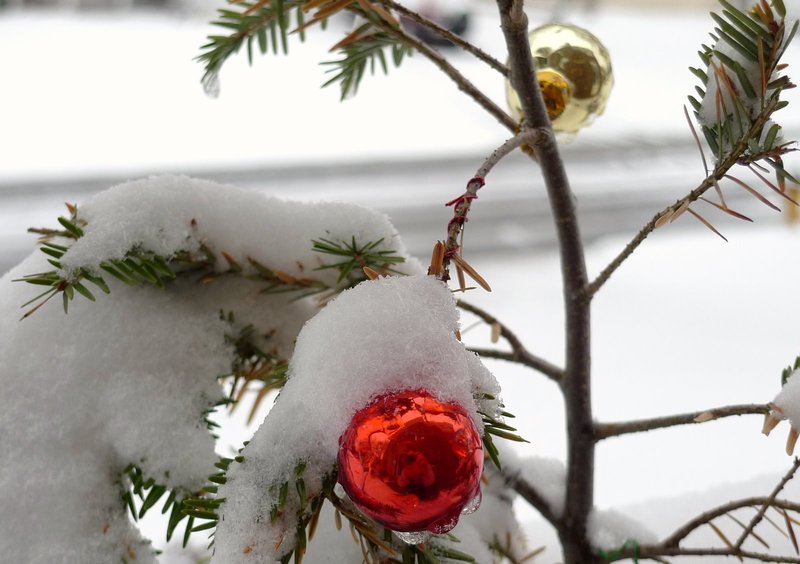 After a day of springlike weather in Kansas City, we were greeted on our second morning there with snow.  The accumulation ended up at eight inches – quite a hefty amount! 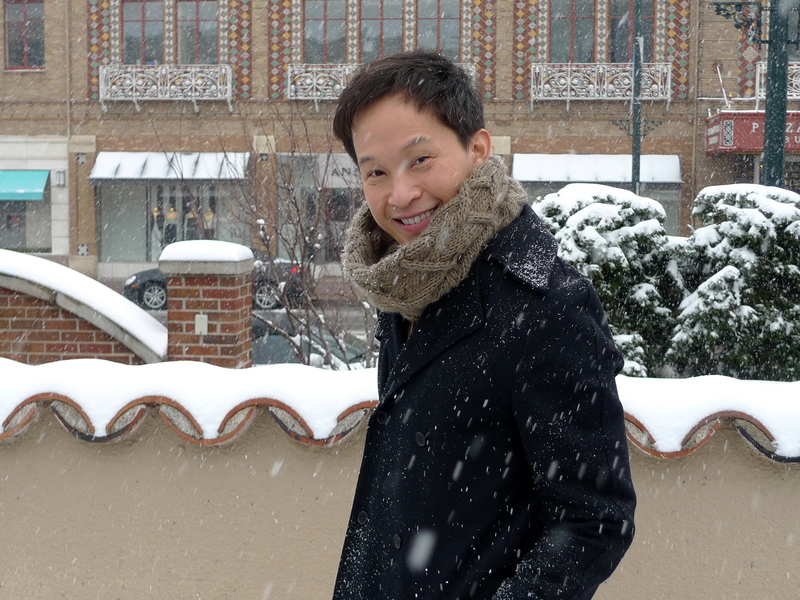 The snow gave me the opportunity to shovel a few driveways as well as an awareness that I really don’t want to live somewhere that receives snow.  It was pretty for taking pictures, though. 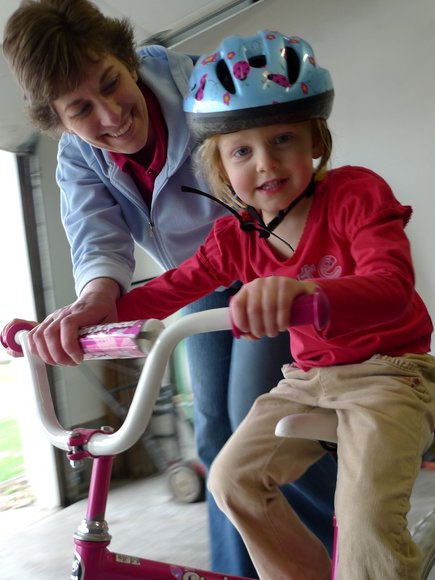 As the weather returned to Spring later in our trip, my youngest niece Ava had the opportunity to pedal around the garage and show off her bicycle riding skills.  We really enjoyed spending lots of time with both nieces and it is interesting to watch them grow so quickly.  I realize it won’t be too many more years before they are so wrapped up in their own lives that they won’t really want to spend a lot of time with their uncles. 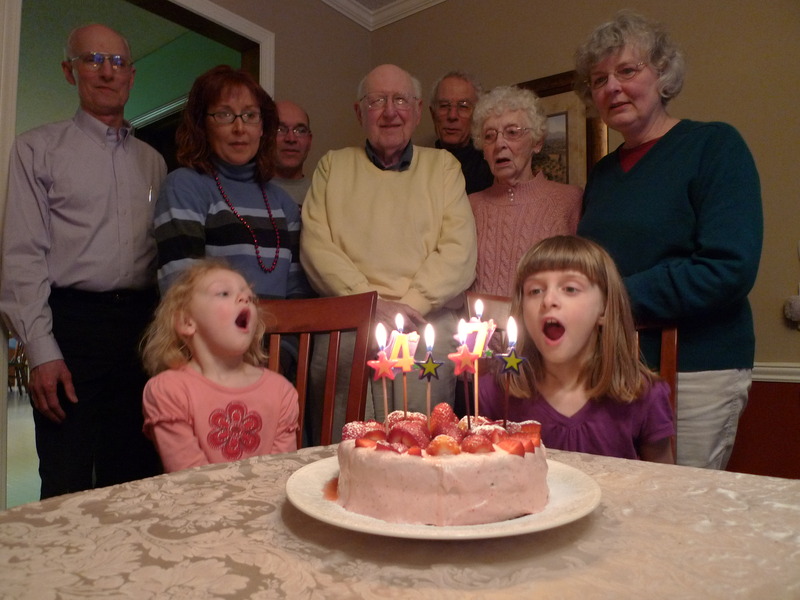 The primary reason to be there was to celebrate the nieces’ birthdays, one at the start of the month and the other at the end.  We split the difference and visited in the middle.  The cake is a strawberry confetti cake that I made. 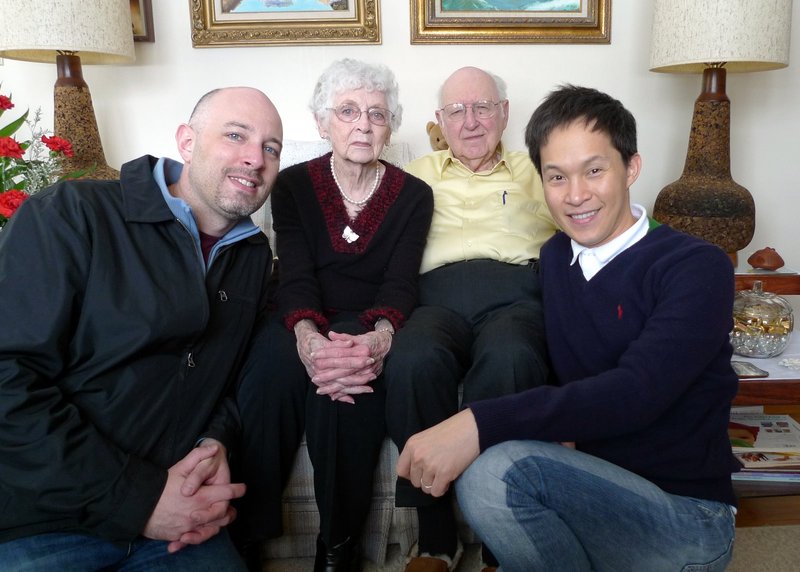 Perhaps the greater reason to visit, though, was to see our grandparents.  My grandmother turned 90 this past week and my grandfather will turn 90 in July, when we return for a family reunion.  As busy and active as they are, you could easily mistake them for people in their late 70s. 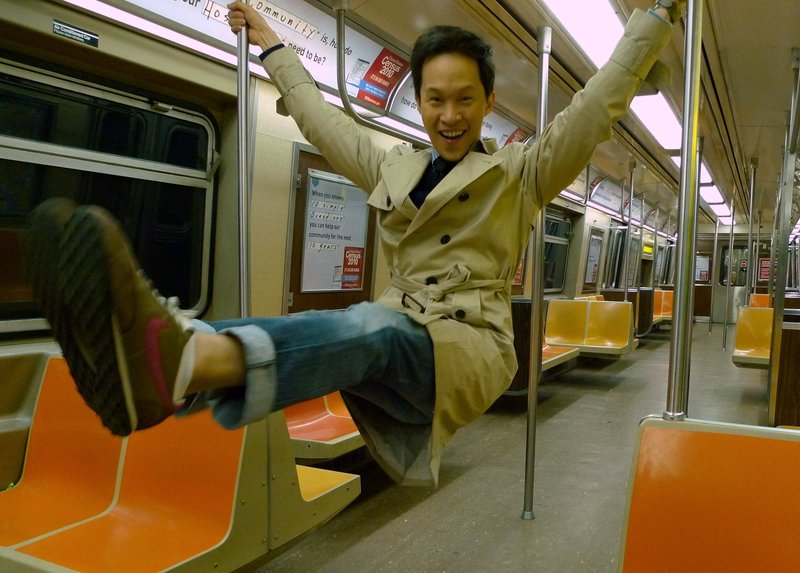 The next stop was New York City – Center of the Universe.  As the line goes in the musical Rent, “it’s a comfort to know, when you’re singing the hit-the-road blues, that anywhere else you can possibly go after New York… is a pleasure cruise.”  Tawn recreates the dance sequence from the movie version of Rent when they sing the song “Santa Fe”. 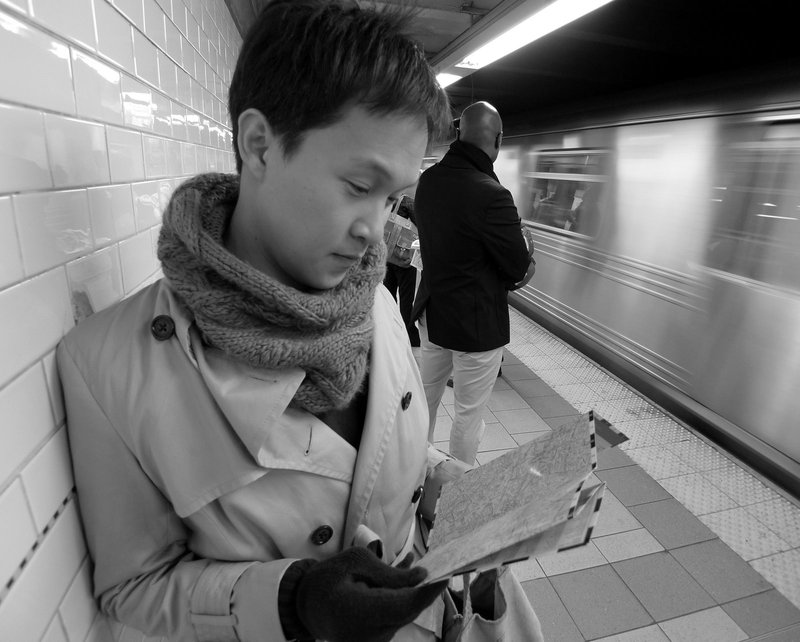 New York is a city that we both like very much, perhaps a place we could live for a few years in the future.  We both have our own agendas while in New York, agendas that overlap on only one subject: food. 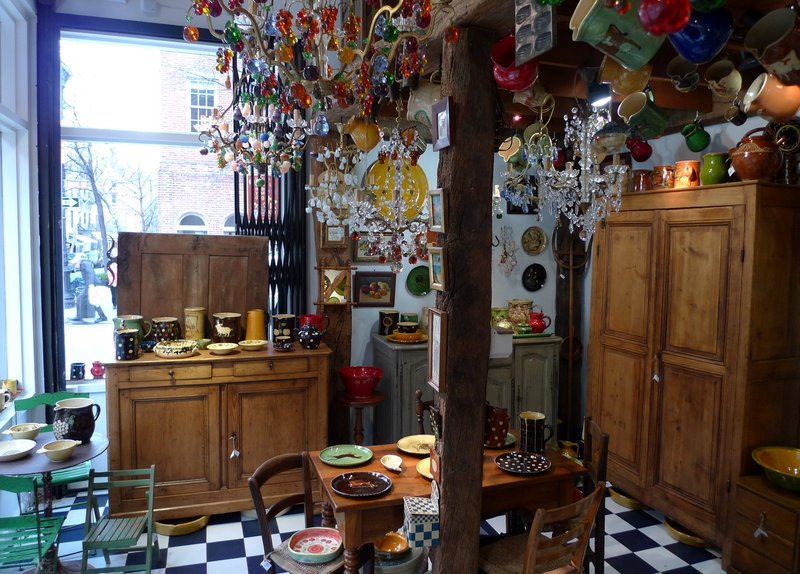 I found a charming shop that imports handmade pottery and clayware from France in Greenwich Village.  Ended up buying a cute pitcher – small pitchers are something I enjoy and would probably collect them if it wasn’t for my awareness that there’s no need to have more than a few pitchers. 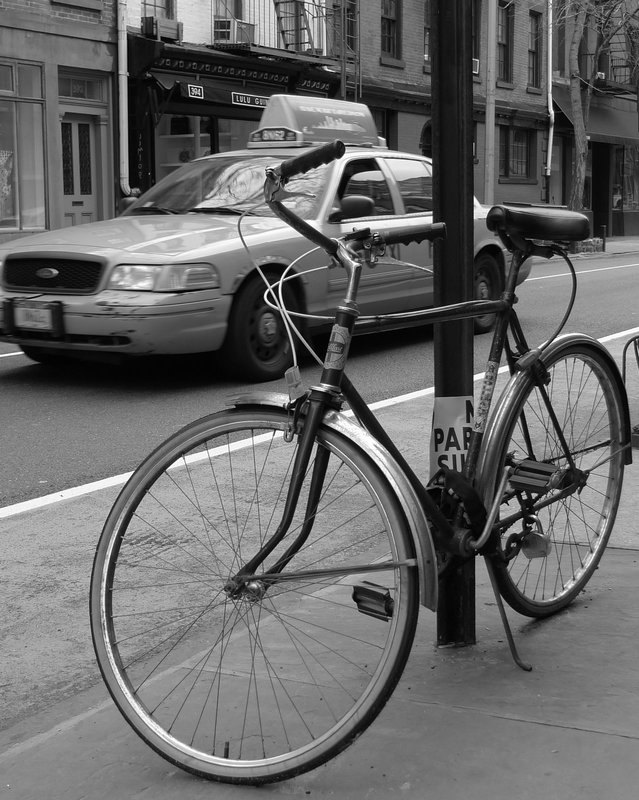 Had an opportunity to look for interesting things to photograph.  There turns out to be no shortage of them, some of which may more interesting to visitors than to locals. 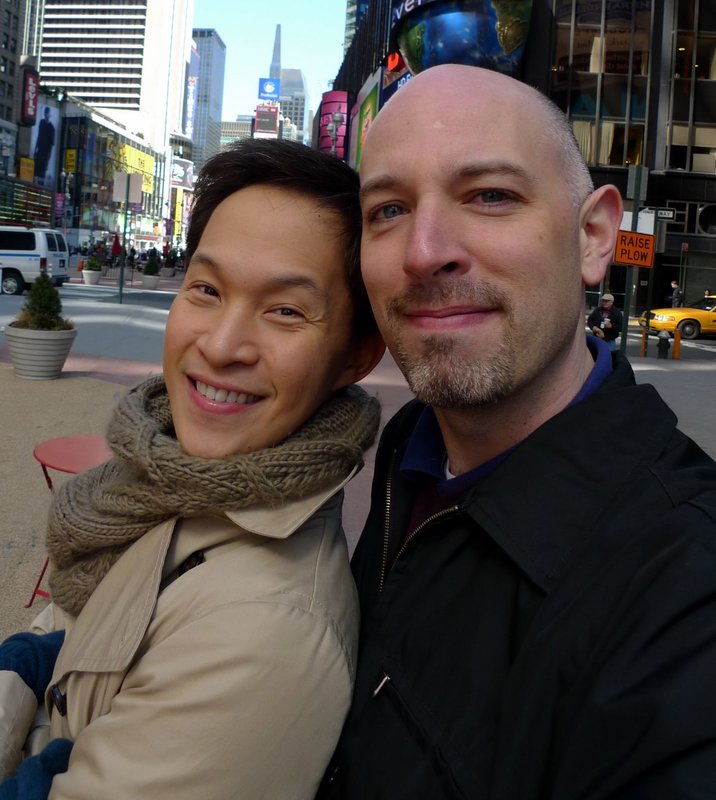 Tested out the new camera and the 18mm wide angle lens attachment while wandering through Times Square.  It works very nicely! 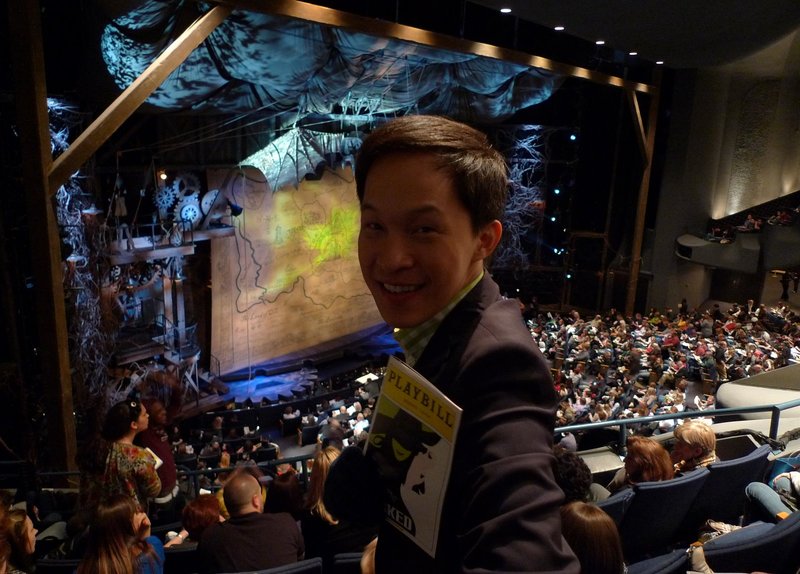 Went to see “Wicked” at the Gershwin Theatre.  A fun show and very enjoyable, although we were frustrated by what seem to be a poor sound system.  Despite good seats, it was often difficult to understand the lyrics. 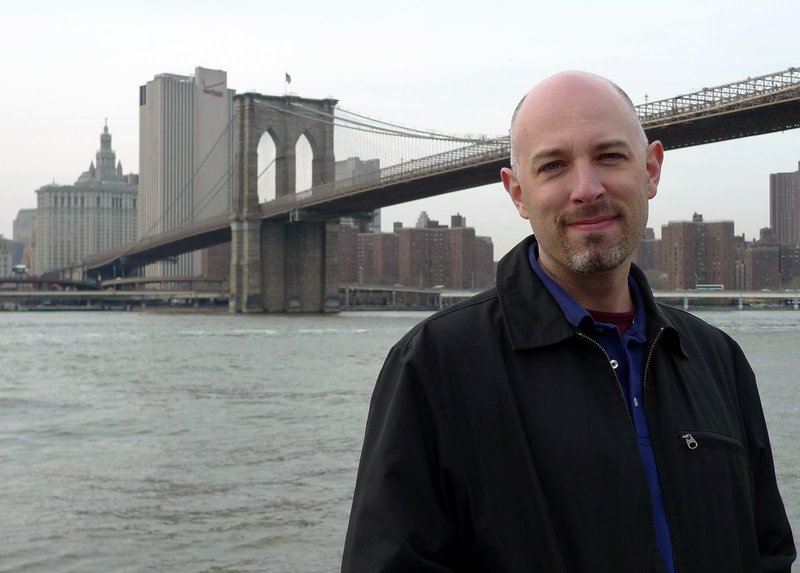 While Tawn went shopping, our friend Biing and I walked across the Brooklyn Bridge, something I had never done before.  It is an impressive span and there’s a nice view of the city from Brooklyn. 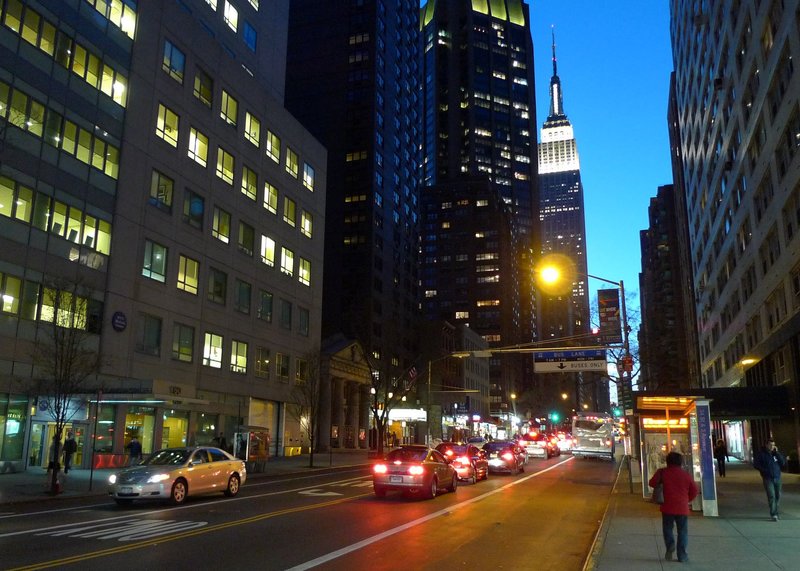 We stayed at the Afinia Dumont Hotel on 34th Street between Third and Lexington, a perfect midtown location.  While the neighborhood isn’t very charming, it is safe and very convenient.  Here’s a view looking up the street – the hotel is in the middle of the block on the other side of the street – towards the Empire State Building just after sunset.  The hotel is a very good value for the money with large rooms and a friendly staff. 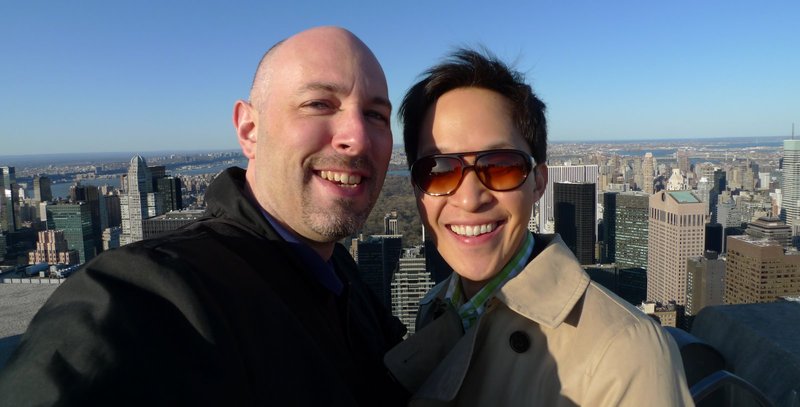 Perhaps a bit touristy and pricey to boot, but Tawn and I went to the Top of the Rock – the observation deck that occupies what was once the Rainbow Room at the top of the GE Building in Rockefeller Center.  It was a windy day and there was a very good view of the entire city. 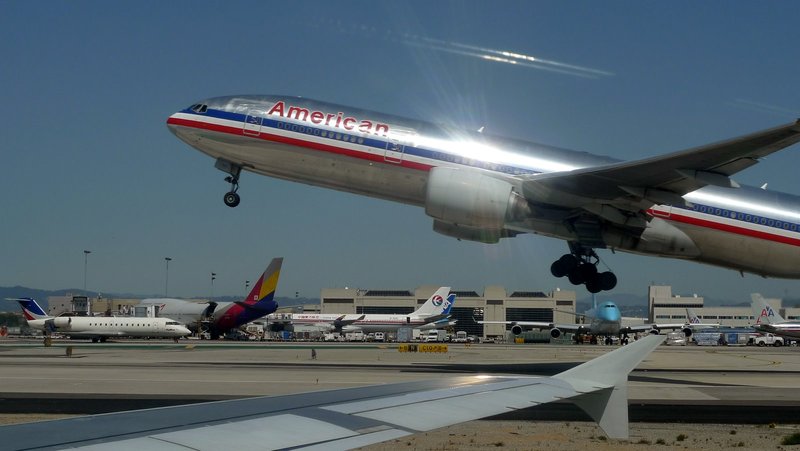 Arriving in Los Angeles about noon on the 26th, I managed to snap this pretty amazing picture.  From where I was sitting I could see that the American B777 was rolling down the parallel runway for take-off.  It was just a matter of timing the picture so I would get the plane in the field of view.  Tawn had a few hours layover before connecting to his nonstop flight home.  I spent the night in LA and visited San Diego the next morning before flying to Taipei.

0 thoughts on “Recap of the Trip to the US”