Tawn is a big fan of rabbits.  This is no surprise, perhaps, given that he was born in the year of the rabbit.  Characteristic of a rabbit, Tawn can be a bit jumpy and is easily startled. 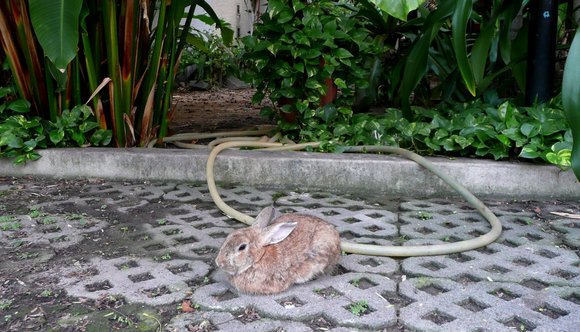 The nearby yoga studio and spa where Tawn goes for classes has lush landscaping and a handful of rabbits that live amongst the foliage and hop about the shady areas of the car park as if they owned the place.  They aren’t especially skittish but they will usually stay a few hops away from you if you move towards them.  In fact, once when I was picking Tawn up after a yoga class, I watched as he chased one rabbit in slow motion.  Tawn moved towards the rabbit to pet him, then the rabbit would hop away.  Then Tawn would move towards the rabbit again and once again the rabbit would hop away.  This continued for several minutes.

Once, when Tawn came out of class and was getting into his car, he noticed that a pair of rabbits were getting intimate with each other under the car.  He tried to shoo them away so he could drive off, but they just ran out from under one side of the car and then ran back under the car from the other side.  This continued for several rounds until they finally hopped off into the bushes to get back to their business.