I thought I’d share with you some of the cooking I’ve done so far this month.  It has been a busy month so nothing terribly elaborate and no videos of my cooking, but some interesting meals have come together in addition to the third (and successful) attempt at macarons!

Cornmeal Crepes with Ricotta and Ham

The first dish was a Cornmeal Crepes recipe from Gourmet magazine.  Cornmeal crepes (in fact, just about any type of crepe) are pretty easy to make and since you can make the crepes themselves in advance and then assemble them later, they are a pretty convenient dish for a weeknight dinner. 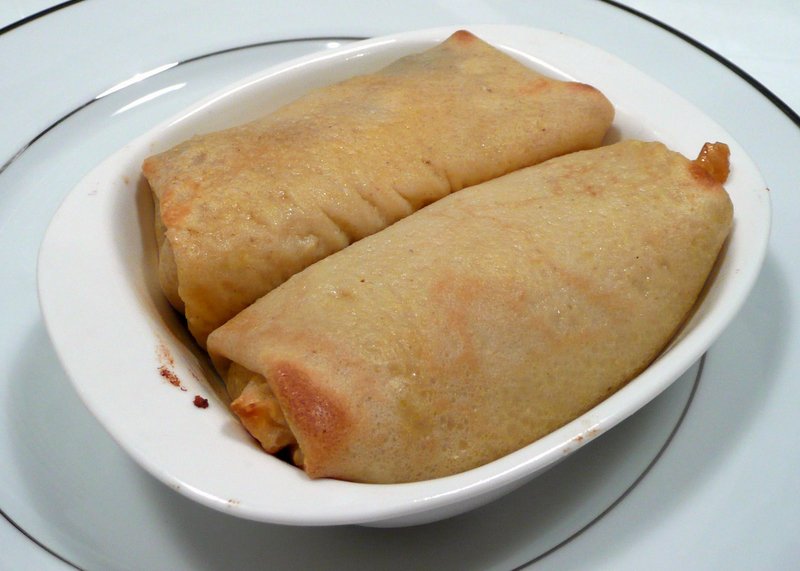 The filling of the crepes is a mixture of ricotta cheese and ham.  The locally produced ricotta we have here in Thailand is oddly dry and chalky, more like smooth feta than the creamier ricotta I’ve had elsewhere.  Because of this, the filling was a bit dry when baked, even with the addition of egg and cheese. 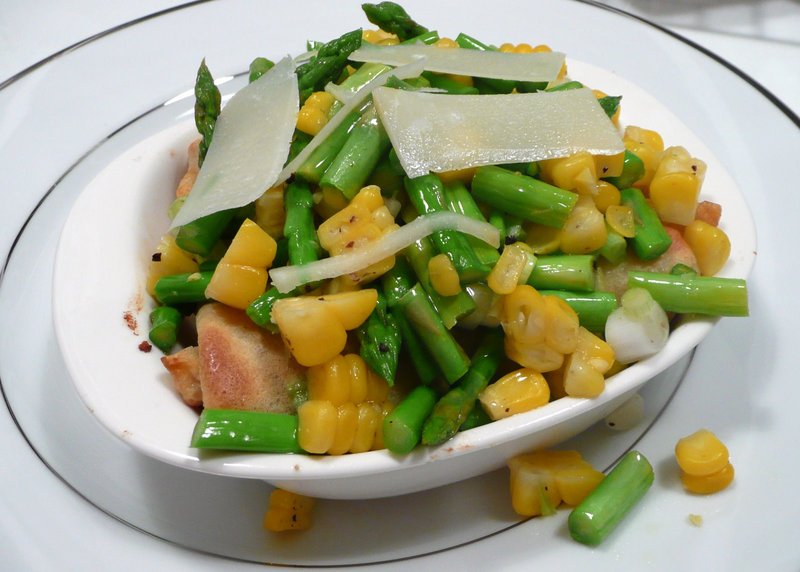 The individual crepes are filled and instead of placing them in a large ovenproof dish, I used these little individual-size serving dishes.  Very “airplane kitchen” of me…  I covered and baked the dishes until the filling was bubbling hot and then topped the crepes with a stir-fry mixture of corn, spring onions and asparagus, with a few shreds of Parmesan cheese.  The asparagus wasn’t in the original recipe, but I couldn’t resist.  Ham and asparagus is a great flavor combination.

Polenta with Mushrooms and Fontina Cheese (Kind of)

One of my favorite food blogs is Joanne Choi’s “Week of Menus”.  She’s a friend of a high school friend, a working mother whose children have a variety of food allergies.  She’s also an avid foodie and good cook.  As you can imagine, she’s juggling multiple priorities and her recipes do a great job of balancing cooking from scratch with good flavor with healthy ingredients that avoid many common allergens.

Polenta (coarse corn meal – a.k.a. grits) is a favorite of mine that I had not prepared in a while.  Joanne’s original menu is basically sauteed onion and mushrooms baked on top of polenta with a healthy smothering of fontina cheese. 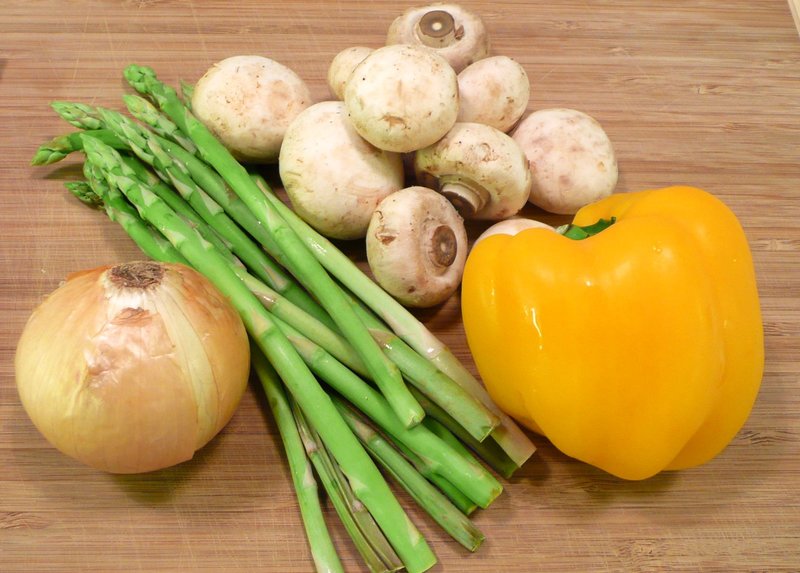 Unable to control myself, I started improvising, adding the rest of the asparagus from the crepe recipe along with a bell pepper. 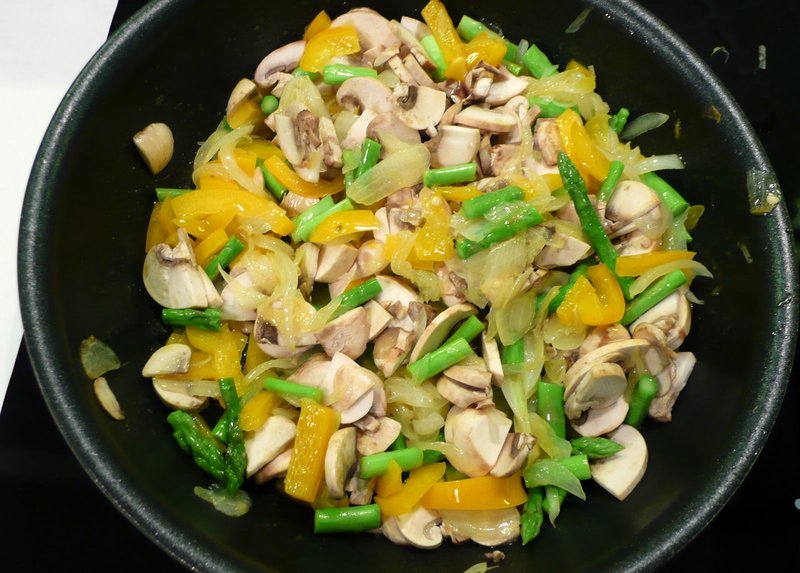 These were nicely fried up until just starting to get tender.  I then poured the polenta into a pot of boiling milk and water, stirring at to thicken.  A few minutes later I noticed a lot of little brown specks floating in the liquid.  “That’s strange,” I thought, trying to figure out what spice I had added that could be floating there.  Nutmeg?  Cinnamon?  No, I hadn’t added anything, I realized.  They were little bugs.

One of the frustrations with buying imported food products here in Thailand is that sometimes the grains and dried goods come with extra protein.  This happens from time to time, I know, and in most countries and in most parts of the population, people probably just deal with it.

While I did consider for a moment whether there would be any ramifications for eating the polenta with the extra protein, I decided against it.  So I grabbed some pasta from the cupboard and boiled it up, doing a last-minute substitution of starches. 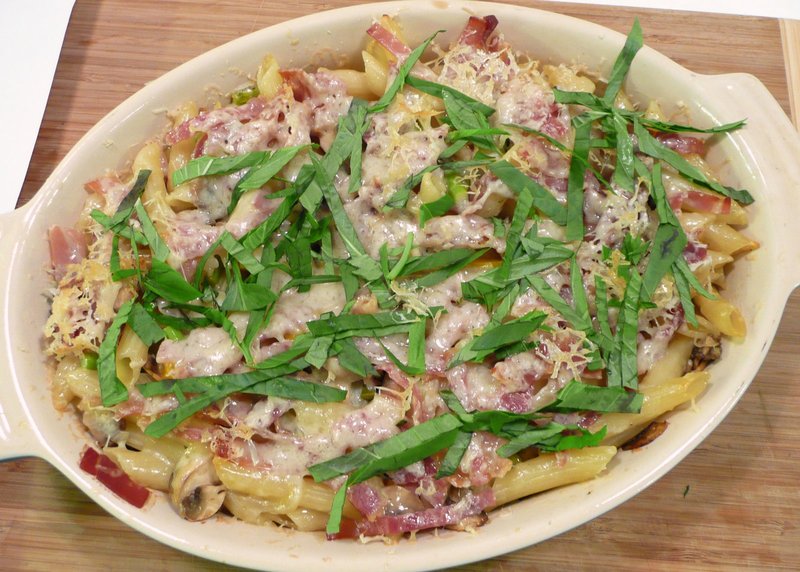 The end result was a perfectly nice dish.  You’ll see I added some chopped prosciutto.  The problem with the pasta is that when you mix it with the fried vegetables (with no sauce), the vegetables kind of fall through to the bottom of the dish!  It tasted fine but didn’t work the same as it would have with polenta.  Well, I’ve bought a new bag of polenta and we’ll try again one of these days soon! 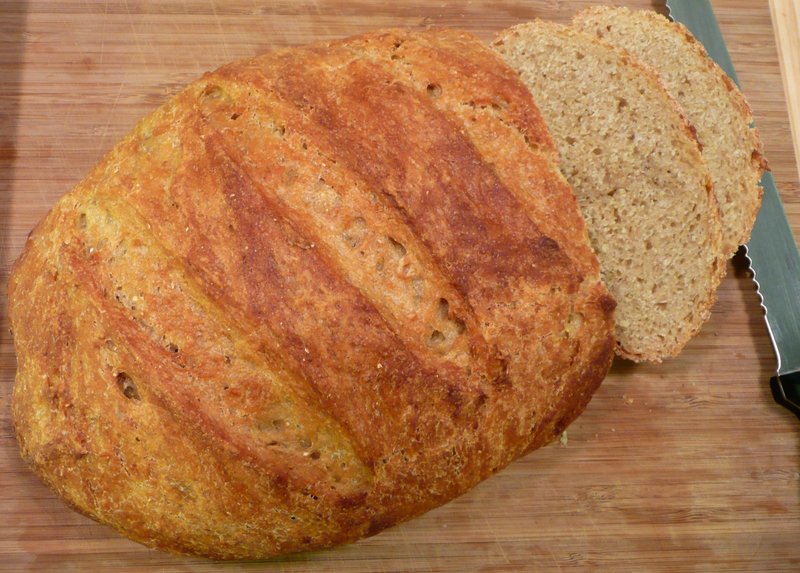 With the polenta… er, pasta… dinner we had a few sliced of whole wheat bread I had baked.  I’m ever-happier with my breads and think they are not only really tasty but they look great, too.

Another of Joanne’s recipes I wanted to try was Garlic Scallion Noodles.  Being of Korean heritage, she makes many dishes that employ traditional Korean flavors: garlic, ginger, scallions, soy sauce… all of which are very yummy.  The noodles were very easy – boil pasta and toss in a sauce of butter, soy sauce, sake (or mirin), scallions, garlic and a little brown sugar.  I would have added some slivers of ginger and some more garlic, but that’s just me. 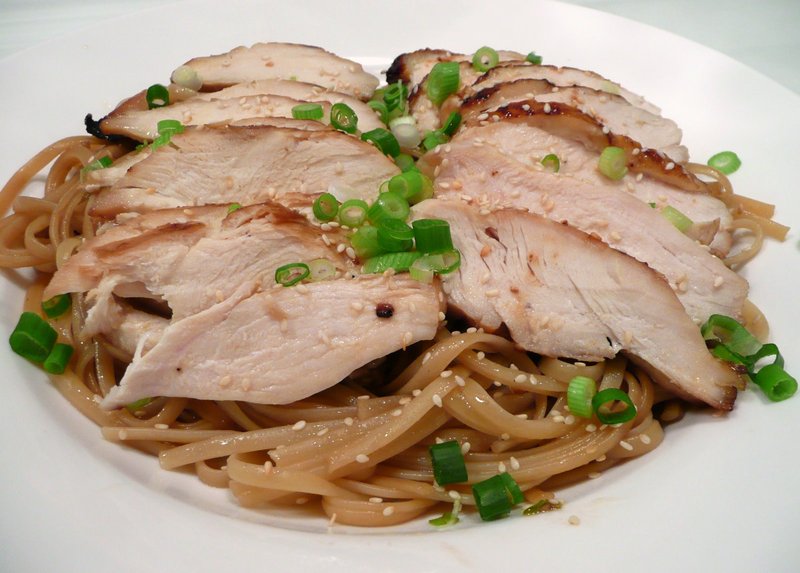 The noodles lent themselves nicely to some Ginger Soy Chicken, which has an excellent an easy marinade.  You can either pan-fry the chicken, grill it on the barbecue, or use the broiled in your oven to lend an indoor barbecue flavor.  The meat stays so moist that even if you give the outside a good char, you can scarcely dry out the meat!

Tawn had been wanting to make some scones for a long time now.  While I regularly bake buttermilk biscuits which a former London-born roommate of mine said were just the same as her grandmother’s scones, I don’t usually make proper scones.  The difference is mostly in the fat used.  My biscuits use Crisco vegetable shortening, which lends a very flaky texture to the bread.  Scones, on the other hand, are made with butter, which results in a more crumbly texture.

I tried the recipe from Martha Stewart’s Baking cookbook for oat and dried apricot scones, omitting the apricots and instead using frozen blueberries. 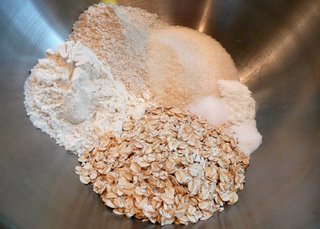 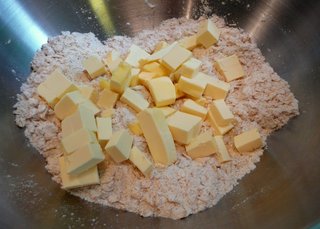 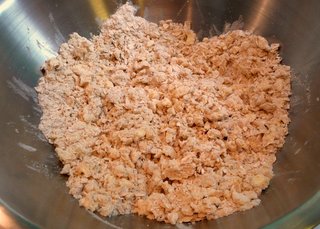 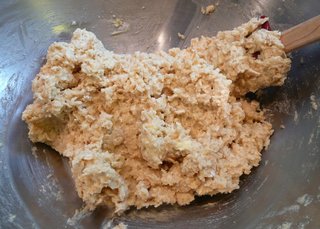 “Coarse crumbs” is a relative term, but I look for pieces of flour-coated butter about the size of a green pea.  Then mix in the liquid: buttermilk blended with an egg.  The resulting dough is very wet, perhaps a bit more wet than I would have expected.  Folk in your blueberries, currants, raisins, dried apricots, or whatever else at this point. 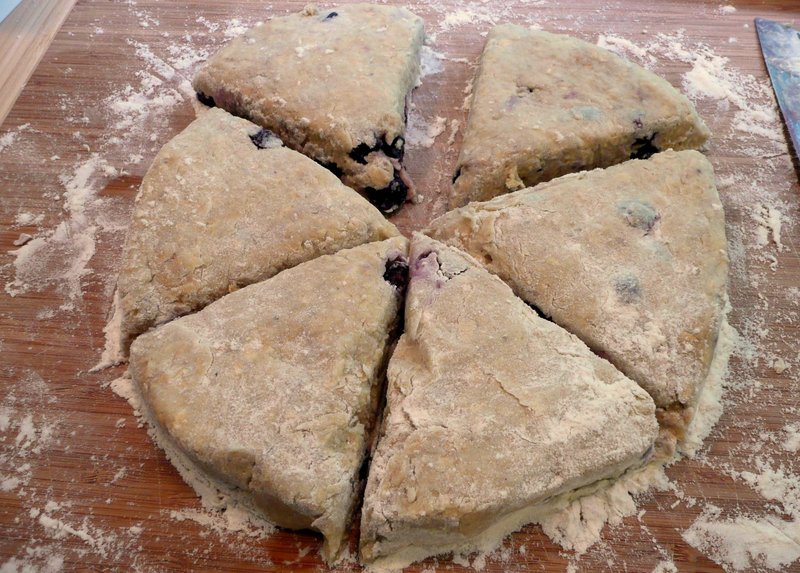 Working on a well floured board, form a circle about 1.25 inches (3 cm) thick and cut into wedges.  I could have made these a little narrower pieces.  Then you arrange the pieces on a parchment lined sheet and freeze them, covered, for at least an hour.  Not having the space in my freezer, I refrigerated them, which resulted in dough that spread more during baking than anticipated. 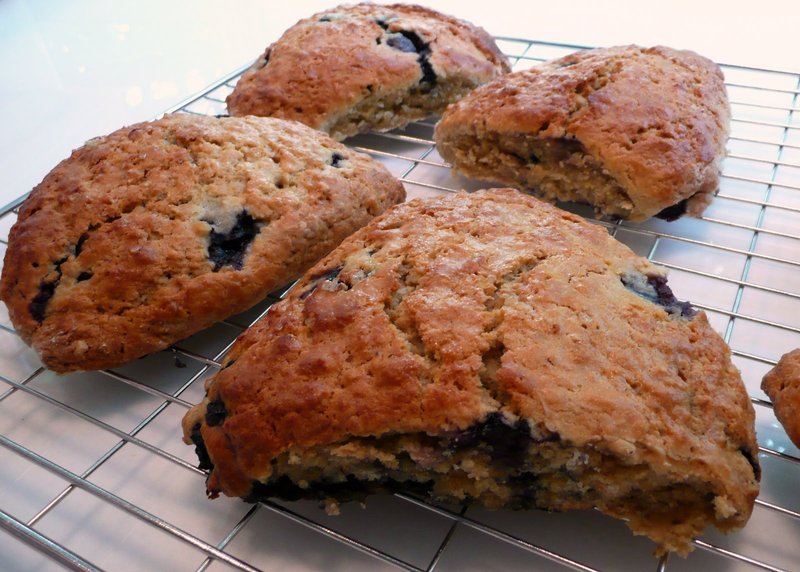 Before baking in a 375 F / 185 C oven, brush with a cream and egg yolk mixture (I substituted buttermilk for the cream) and sprinkle with coarse sugar.  It took about 30-35 minutes to make the scones.  They turned out really tasty although I’m going to fiddle with the recipe.  I think a butter-shortening mix would be better as I like scones that are flaky and not just crumbly.

So that’s the cooking thus far this month.  I’ll probably return to both the polenta and crepe recipes and try them again this week to see if with bug-free polenta and creamier ricotta the results will be more in line with what I expected.

Here’s to your good eating!

0 thoughts on “February in the Kitchen”