Epilogue Below – Tawn had an interesting experience on Monday as the same man approached him.  Read below the original entry for the rest of this funny story. 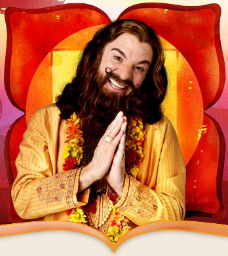 “God has given you the face of a man blessed with good luck and happiness,” the Indian man said to me as I sat in Starbucks.  “It is this face that called me to you.  I am a yoga holy man and God wanted me to speak with you.”

I swear, the strangest things happen to me.

Friday afternoon, after meeting briefly with my accountant to hand off some documents, I was sipping a coffee in the Ploenchit Center Starbucks.  There were no other customers in the glass-walled store, unusual given that it was the lunch hour and the store is located in the midst of the business district.

An Indian man, dressed in a long-sleeved shirt and jeans and looking as much like a computer programmer as anything else, came up to me.  This was not the first time I had been approached by foreigners while drinking my coffee.  Fifteen minutes earlier, a British couple, retired and wearing their safari shorts and hats, asked me if I knew where they could find free wi-fi.  My aura must radiate the words “ask me”.

So when the Indian man approached me, I figured he, too must have a question needing answering.

“God has given you the face of a man blessed with good luck and happiness,” the Indian man said to me.  Instinctively, I thought about where my wallet and passport were and made sure I had a clear line-of-sight to my messenger bag.

“It is this face that called me to you,”  he explained. ” I am a yoga holy man traveling on a journey and God wanted me to speak with you.”

Skeptical, I listed to him, curious how this scam would unfold.  He explained that he was a yoga practitioner from India, showed me a picture of his guru, and told me that my face radiated happiness and good fortune.  He proceeded to explain that despite this good fortune and happiness, that I thought too much and became needlessly engrossed in my thoughts.  Oh, and I am sometimes too direct and honest with my friends.

“I will prove to you that God has sent me to you,” he said, pulling out several small sheets of paper and a pen.  I noticed that instead of selecting just a single sheet upon which to write, he kept them stacked.

“I am going to write something on this piece of paper and then I will give it to you to hold.”  He scribbled on the paper then folded it into a ball.  Handing it to me, he instructed me to hold it in my clenched fist.

“What God has told me to write on that paper is known only to me.  You do not know it, right?”  Penn and Teller would have loved this set-up, I thought.  Sure, I agreed.

Putting another sheet of paper on top of the stack he asked me my father’s name.  “George,” I lied.  And your father’s father’s name?  “George,” I repeated.  They have the same name?  “Yes, my father is named after his father.”  Lying is a sin but I wasn’t about to tell him any personal information.  Plus, this was getting fun.

“Think of a number, a single digit number,” he continued.  “One,” I responded as he wrote the answer on the paper.  “Are you married?  Do you have a wife?” he asked.  “Yes, I am married but I don’t have a wife.”  A look of confusion before he asked what I meant.

“Why did you do that?” he asked, trying to processes this information.  “You mean, a boyfriend?”

Regathering his senses, he asked me to think of the type of flower that my… he stumbled for a word… the person you love likes the most.  “Orchid,” I said.  “He likes orchids.”  Orchids was added to the list.

“Let me see your palm again.”  He traced another line while clumsily holding my hand in his.  “This is your love line.  You will have a long and happy marriage.”  He instructed me to close my fist again.

“David,” he said, “God has sent me to you.  We are building a yoga school in India and I am traveling and he has blessed you with the face of a lucky man which is why I was able to find you.  What are the odds of us finding each other in this crowded place?”

I responded skeptically.  “The odds are pretty good considering you were looking for an easy mark and I was sitting by myself in an empty coffee shop.”

He looked hurt.  “You do not believe me?  I will show you that God has sent me to you.  Open the piece of paper in your hand and look at it.”

“Let me see the paper you just wrote on.”  He handed it to me.  Of course, they were a perfect match.  That’s what happens when you use pressure-sensitive paper.  He had performed an elementary sleight-of-hand and swapped the piece of paper that was already in my hand for the one that had been below the list he was writing while he “read” my palm.

Tiring of the charade, I called his bluff.  Explaining his technique and telling him he must think I’m quite stupid to fall for a cheap parlor trick, I wished him well as I stood up and gathered my stuff.  As I walked away, I patted my pocket and looked in my bag, just to make sure his sleight-of-hand didn’t include pick-pocketing.  My wallet and passport were still there.

Another blog-worthy event in my life.

Monday after lunch Tawn stopped by the same Starbucks for coffee.  While sitting there, he was approached by the same Indian man who started in with the same line.

“Oh, it is good to see you again!”  Tawn cut him off.  When the man looked confused, Tawn continued, “Don’t you remember me?  You came and spoke with me last week and told me about my good luck.  How are things going with your yoga ashram?”

This continued for a few moments with the man caught off-guard.  Tawn explained the whole thing – “You even did a magic trick to prove that God had sent you to me.  Don’t you remember?” – as if he had actually been there.

Finally, the man said, “Oh, yes – I had forgotten you because you didn’t make a donation to our ashram.”  When the man asked Tawn if he would donate to the ashram, Tawn declined.  The Indian man countered by offering to tell him more good luck.

“Oh, you told me everything last time!”  Tawn exclaimed.  “You told me about all the bad luck I had had and all the good luck, too!”

The man asked if he could sit down.  Tawn responded that the man was welcome to sit down but that he had an appointment to go to.  With that, Tawn stood up, said goodbye and walked away, leaving the Indian man standing there speechless.