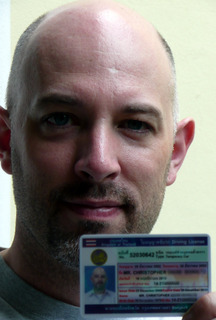 What did I want for Christmas?  Not a new Din Tai Fung location here in Krungthep, although that did turn out to be an early and unexpected surprise.  What I really wanted was a Thai Driver’s License.  Yes, I drive in Thailand, and for the past four years I have used an International Driver’s License which anyone can obtain at your local automobile association office.

For the longest time, I’ve considered that getting a Thai Driver’s License might be an exciting adventure to write about.  With my International licence expiring the fourth of January, I decided getting the Thai license would be better than driving on an expired International one.

Unlike what other websites say, you do not need to bring two passport-size photos.  The Department of Land Transport (DLT) uses digital cameras for the licenses these days.  You also do not need to complete an application form.

I went to the DLT office located on Paholyothin Road across the street from Chatuchak Market and just a short walk from the Mo Chit BTS Skytrain station.  Take exit 2 and walk past the Civil Aviation Training Center which has a helicopter and single-engine plane sitting out front.  The DLT is the next complex on the street.

When I arrived at the DLT, I discovered that it is a very large complex with many buildings surrounded by lots of parking lots.  Asking the guard, he pointed me to building 4, which was around the corner and quite far back.  This part was a little confusing if you don’t read Thai as the building numbers are in Thai numerals.  Certainly handy to read Thai or have a Thai friend accompany you.

Once at building 4 I asked at a counter on the first floor and was directed to the second floor.  At the information desk the woman reviewed my documents to ensure I had everything I needed and then gave me a queue number.  I headed inside the packed waiting room and noticed that the current number was 560 and my queue number was 837.  Yikes!

Looking at the ticket, I noticed it said “Foreigner Counters 15-18” so I headed to that end of the room.  A woman approached me and asked what number I had and then escorted me to counter 18.   It seems that I bypassed 277 other people in the queue.

The counters are actually cubicles and once inside, I sat across from another lady who spoke English quite well, although I made every effort to communicate with her only in Thai.  After reviewing the documents again she asked for copies of two additional pages in the work permit.  She waited while I walked to the lobby and paid one baht each for the copies from the ad hoc copy shop.  Back in the cubicle, she decided everything was okay paperwork-wise and sent me to the third floor for the eye tests.

The third floor was a fun experience.  After going to the information counter I was pointed inside to the first of three stations.  At it sat a woman next to a large color blindness chart – a large circle composed of smaller circles made up of different colors.  She had me stand behind a line on the floor about three meters (ten feet) away and pointed at various circles and I correctly named the colors.  After about five circles she stamped my paper and pointed me to station two.

Station two was confusing.  There was nobody there to administer the test so I sat down and waited for a few minutes until the lady at station one came over and explained that it was a self-administered test.  There were two stools at a table and each stool sat in front of a metal box with an accelerator pedal and a brake pedal.  Some distance away were two other boxes that had a large red and green lights on them along with a black strip.

You pressed a start button on the table and then stepped on the accelerator, turning on the green light.  After a few seconds the light turned red.  The objective was to then step on the brake pedal as quickly as possible, before the LED lights on the black strip illuminated from green to red.  It took a few tries to get the hang of what was expected of me.  On the fourth try I was able to stop quickly enough, proving the rapidness of my reflexes.

The third station was a test of peripheral vision.  It was also a hygienic nightmare.  You placed your nose on a metal counter – no wiping between customers – staring straight ahead as the administrator illuminated red, green or yellow LED lights to the left or right of your field of vision.  You had to correctly name the color of lights while maintaining your forward gaze.  Two our of three correct and I passed.  Who knows what germs I picked up as well.

My eyes freshly tested, I returned to the second floor.  Fellow test takers who were Thai and were applying for their first driver’s license had to proceed to the fourth floor to take a written test and then outside to conduct a practical driving test.  Since I already have a driver’s license, neither a written nor practical test are required. 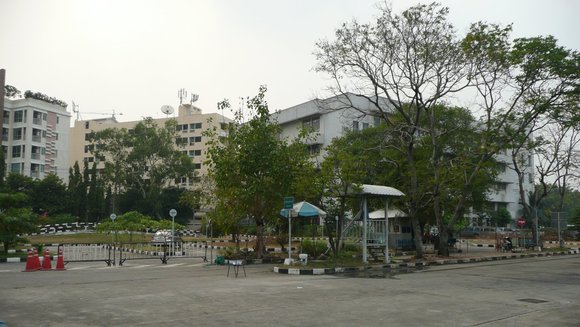 On the second floor I was back in cubicle 18 after just a few minutes’ wait.  The clerk entered the information, had me pay my 205 baht fee (about US $6.20) and asked me to verify that my name, birthday, etc. were entered correctly.  She then took my picture a few times and, once satisfied with how it turned out, chatted with me for a few minutes as the license was printed.

It is a one-year provisional license.  After the year is up, I reapply and am given a five-year license which can continue to be renewed so long as I’m legally living in Thailand on a non-tourist visa.

All told, it took me about an hour from when I entered the building until my exit, new license still warm from the printer.  Now when I see the crazy drivers on the streets here, I feel entitled to lecture them about proper driving habits.  After all, I am officially licensed to drive in Thailand!

0 thoughts on “Getting My Thai Driver’s License”