When I mentioned in the previous entry that I grew up with air travel in my blood, I wasn’t kidding.  Here’s some documentary evidence. 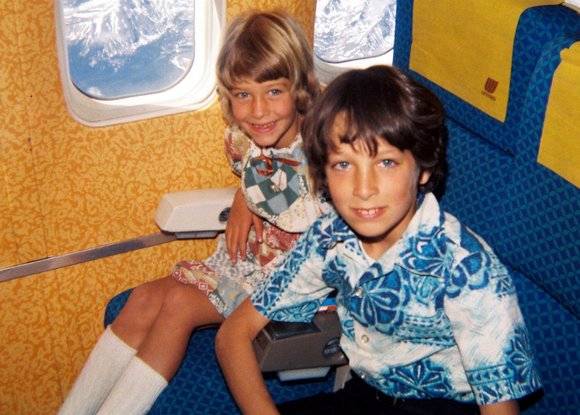 Dated Easter 1980, when I was nine-and-a-half years old, this picture shows my sister and me flying unaccompanied on a flight from San Francisco to Kansas City.  Traveling on employee passes, since my father worked for United, this was probably one of our earlier flights flying solo.  The plane is a Boeing 727-022.  Check out the funky wallpaper! 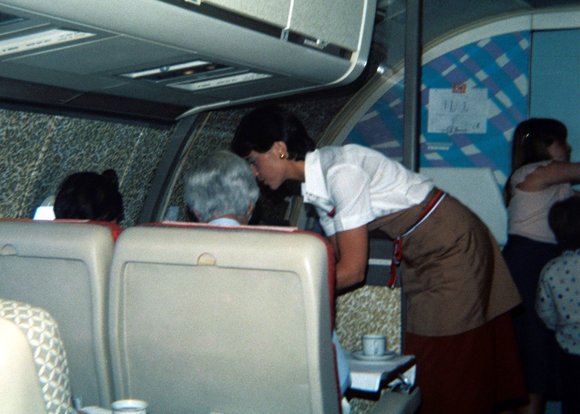 A sneak view into First Class on the same flight.  Different wall treatment up front.  This was in the days when United operated a nonstop between SFO and MCI.  In fact, twenty years or more after discontinuing the nonstop service, a few months ago United once again resumed nonstop service on this route using United Express partner aircraft. 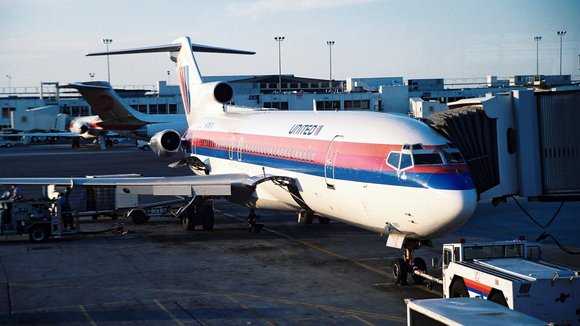 After the nonstops went away (following deregulation) the name of the game was Denver Stapleton, one of United’s two largest hubs.  In the years leading up to the opening of the new airport in Denver, United’s operations were so overcrowded they would park a second row of airplanes behind the row pulled up to the gates, leading to domino effects of delays if one of the planes in the back couldn’t leave on time.  Here’s a Boeing 727-200 with Continental’s DC-9s behind.  This was in the days when United, Continental and Frontier (the previous version of it) all had hubs at Denver. 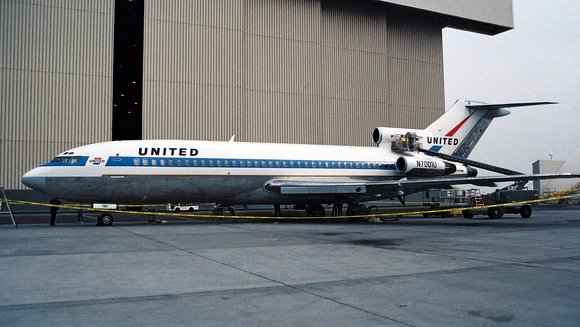 In 1992 as United was phasing out its Boeing 727-022 aircraft, it donated this one, its first 727 (note the registration number N7001U on the engine) and in fact the first 727 ever produced, to the Boeing Museum of Flight in Seattle.  One of her sister ships (N7017U) was donated to the Museum of Science and Industry in Chicago, where it remains on display to this day.  In preparation, mechanics repainted the plane to its original paint scheme, hand-taping all of the logos and detail work.  I had the opportunity to visit United’s Maintenance Operations Center in San Francisco and walk around taking pictures of this plane.

0 thoughts on “Archive Photos – An Aviation Buff from the Start”