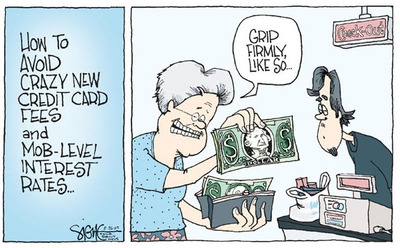 News reports of tough times in the financial industry tell of credit card customers getting the squeeze in advance of the start next February of the new credit card protection act,  Whether through higher interest rates, lowered credit limits or increased fees, credit card companies seem determined to do their damnedest to bleed consumers dry before some restrictions are placed on them.

I wonder, though, if this might be a good thing?  Several people I’ve spoken to muse that they hope the recession that we’re now mucking through will be enough to change people’s high-spending ways and consumerist habits.  I’ve been skeptical that the lessons will be learned or, at the very least, will last very long once the economy begins to rebound.

However, if credit cards companies keep tightening the screws, it might become so unpleasant and so painful to pay by credit card that many consumers may once again learn the habit of paying cash and only buying what they have the money to pay for.  It seems to me that that, more than anything, would help us turn the corner on our instant gratification, buy-cheap-crap-now-so-we-can-throw-it-away-later, IKEA/Wal-Mart mentality towards life.