The oven rarely cools down as I turn out another loaf of bread every few days.  I’m becoming comfortable with the pale ale pot boule recipe in “Kneadlessly Simple” and am experimenting with the recipe a bit (after I mastered the original recipe, Sheldon) and am now mixing in small amounts of rye flour, corn meal and oats.  It makes for a very interesting, flavorful bread. 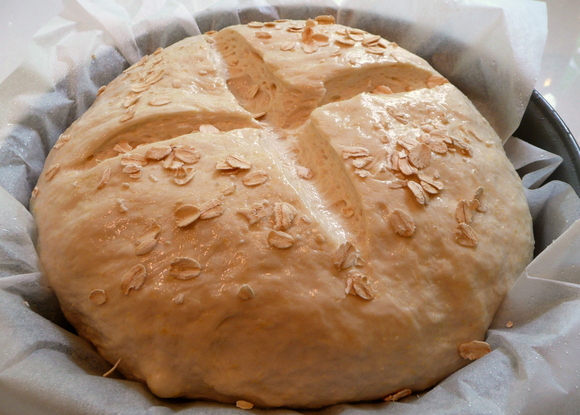 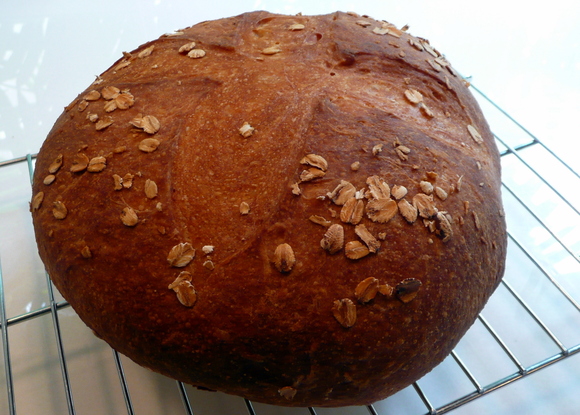 Before and after shots of one of my recent loaves.  It turned out beautifully.  We’re having panini at least one night every week and toast with our oatmeal every morning.

Have I explained the no-knead process to you?  It is tremendously easy.  You stir the ingredients together in a bowl, cover the bowl with plastic wrap, and then allow it to rise in a cool temperature (we’re placing it right under the air conditioner so it is at about 70 F) overnight or until doubled.  You can precede that rise with a rest in the refrigerator of up to eight hours, which gives the dough more time to develop flavor.

You can then shape the dough into whatever shape or pan you want it in, let it rise at normal room temperature until it has almost doubled again, then bake it.  Start with a very hot oven and then cool it down after putting the loaf in.  This gives you a big initial “poof” in the loaf, then allows it to finish cooking through without burning the exterior.

Here’s the recipe with a few process modifications based on what I’ve learned.  The original recipe comes from the book “Kneadlessley Simple: Fabulous, Fuss-Free, No-Knead Breads” by Nancy Baggett.  No-knead breads gained some interest after Mark Bittman wrote a column about them.  CI did a follow-up recipe in which they came up with some improvements (less in the recipe than in the technique).  I’ve incorporated those into Baggett’s recipe for a crusty pale ale pot boule.

In a large bowl, thoroughly stir together the dry ingredients.  Vigorously stir in the ale and water, scraping down the bowl sides completely and mixing until the bubbling subsides and the dough is thoroughly blended.  If it is too dry to mix together, gradually stir in just enough more ice water to blend the ingredients.  Don’t over-moisten as the dough should be stiffer than normal bread dough.

Brush or spray the top of the dough with oil.  Tightly cover with plastic wrap and place in refrigerator for 3-10 hours.  Then let rise at cool room temperature for 10-18 hours or until a bit more than doubled.  If convenient, vigorously stir once about halfway during the rise.

Gently lift and fold the dough in towards the center, shaping into a boule.  Place on a long (about 18-inch) length of parchment paper placed in a cake pan or pyrex pie plate so the dough doesn’t spread too wide.  If necessary, spray/brush the top of the dough with oil and loosely place plastic wrap over the top to keep the dough from forming a skin.  Allow a 1.5-2.5 hour regular rise at warm room temperature or until doubled.

About 20 minutes before baking, put a rack in the lower third of your oven.  Put a heavy metal pot or Dutch oven (with cover) on the rack and pre-heat to 450 F.  While the oven is preheating you can slash the top of your loaf with a sharp knife.  You can also add the optional seeds, spraying the top of the loaf with water and then sprinkling the seeds generously.

Once fully heated, remove the Dutch oven (working carefully – HOT!) and transfer the loaf to the pot by lifting the corners of the parchment paper.  Gently shake the pot so the dough settles.  If it is a bit uneven, that’s okay – it will work out during the baking.  Give a good spray or two of water on top of the loaf then put the cover back on, placing the pot back in the oven. 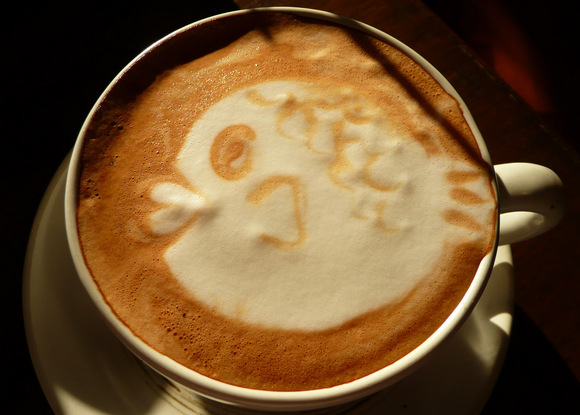 Some of the employees at the coffee shop at which my Thai tutor and I have been meeting for more than three years, Bitter Brown on Soi Asoke, have a talent for latte art.  This isn’t a normal occurrence but the other afternoon I was about to add sugar to my latte when Khru Kitiya (“Teacher” Kitiya) pointed out the fish.  Cute, isn’t it?

0 thoughts on “More Loaves and Fishes – with Recipe”