My desire to understand different foods and dishes by learning how to make them is an unquenchable thirst.  Not a week goes by without the thought of, “Oh, I wonder how you make that?”  In the back of my mind right now, I’m wondering how to make French fries, homemade corned beef (for Reuben sandwiches, of course) and fork-and-knife baby back ribs.  Last week the question was about bagels, so I set off to try and make them.

I’ve been to New York countless times and eaten a good number of tasty bagels.  Still, I wouldn’t claim to be an expert of what, exactly, makes for a good bagel.  I started out Googling “what makes a good bagel” and found this interesting NY Times article that explores good bagels in each of the boroughs.  I also searched a number of different “authentic” bagel recipes in order to see what the common ingredients and techniques are.

Once I felt like I had a good basic understanding of what a bagel should be and how to achieve that ideal, I promptly did exactly the wrong thing.  I started to improvise.  This is my failing both as a cook and as a good student.  Instead of learning (and mastering) the fundamentals, I rush into the improvisation.  The problem, of course, is that one cannot effectively improvise if you don’t know the fundamentals.  But that has never stopped me!

“Ugh!” I thought, “I don’t want to spend a lot of time kneading the dough.  Why don’t I just ditch the bagel recipe I have and use a basic white bread recipe from the “Kneadlessly Simple” book of kneadless breads?”

Anyone else would have recognized that as the recipe for disaster that it turned out to be.  I, however, just had to try.  As such, my first batch of bagels fell flat… literally. 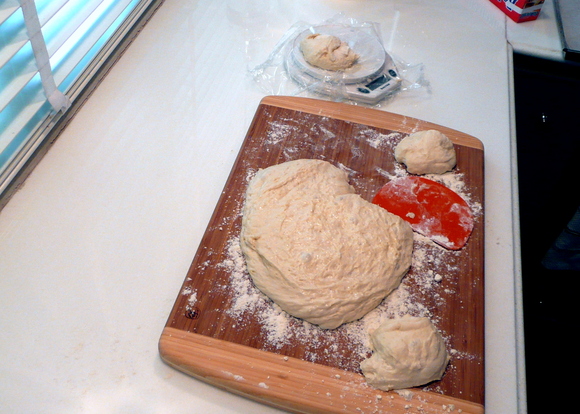 Everything seemed to be okay at the start.  The dough did a cold rise overnight, sitting in a bowl beneath my bedroom air conditioner.  In the morning I measured out three-ounce balls (referencing the NY Times article that suggested that bagels were probably better back in the day that three ounces were the standard serving size instead of today’s four-ounce and larger sizes). 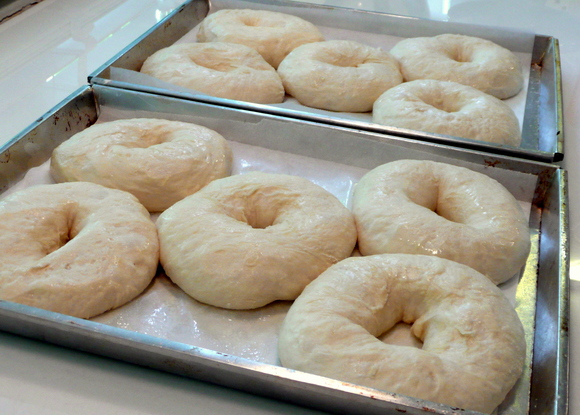 The dough shaped into nice, bagel-looking rounds and puffed up beautifully in the second rise.  The problem is, the dough was too hydrated.  In other words, too wet.  So they stuck not only to each other but also to the oiled parchment paper. 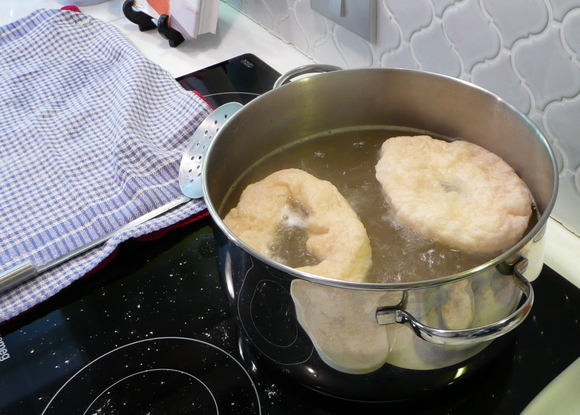 By the time I pulled them off and put them in the pot of gently boiling water, they were mangled and deflated.  Their surfaces, instead of forming a nice smooth skin, were cragly.  Undaunted, I finished boiling them and then threw them on a tray and into the oven. 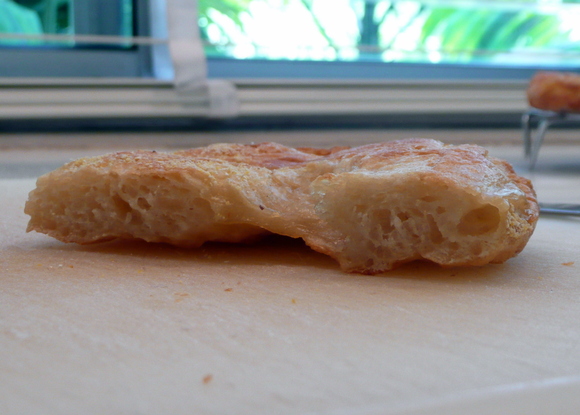 The end result was, as I mentioned before, sort of flat.  They tasted great and had a nice chewy texture.  More like a bialy, actually, but without the onion.  But they were ugly and didn’t have the qualities that one expects in a bagel.  Namely, looking like a bagel.

Never one to shy away from failure, I decided to try again the next day, this time – gasp! – following a recipe.  It was titled “Authentic Jewish Bagels” so I felt like it could be trusted.  Since I didn’t want to feed an army, I did cut the recipe in half.

This time, I did the kneading by hand instead of trying a kneadless method, although I think the kneadless method could still work.  The dough came out with a much lower hydration, which was good. 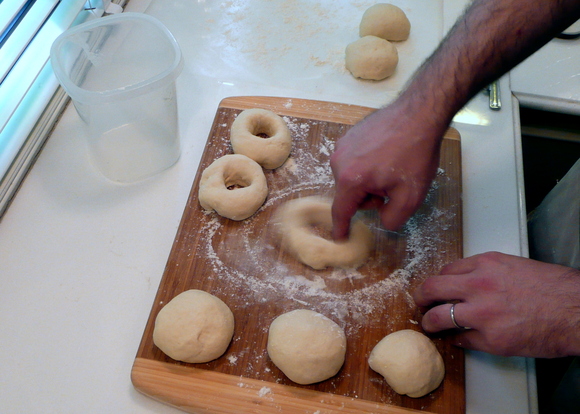 In case you are curious how to make the holes, I use the “hole-centric” method.  You flatten the center of the ball slightly and then work your finger through the dough to make a hole.  You then spin the dough around your finger a few times and it forms a nice bagel shape. 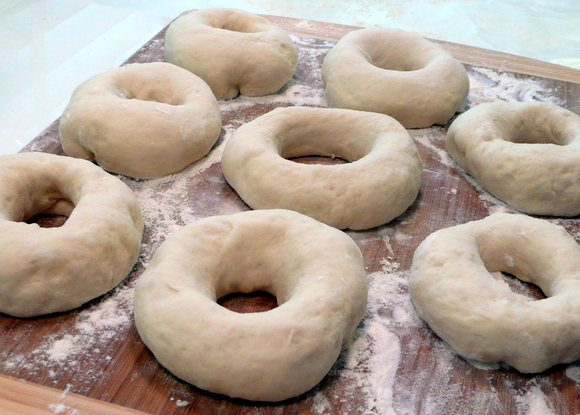 Despite the drier dough, I took no chances.  These babies were put on a well-floured board.  They still didn’t have quite as smooth an exterior as I wanted but over the next thirty minutes, they rose nicely. 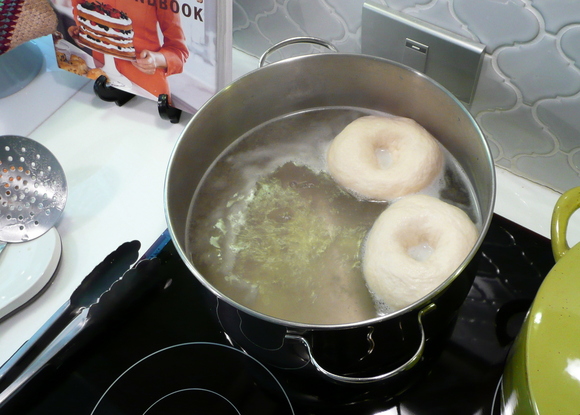 Back to the boiling pot.  This time I didn’t have any troubles handling the bagels so when they went into the pot, they remained inflated and even puffed up some more.  After about one minute on each side, I quickly drained them on a dish towel then put them into the oven. 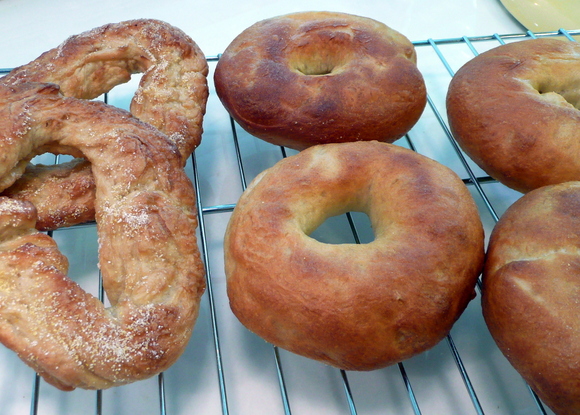 The end results of attempt one (on the left) and attempt two (on the right).  As you can see, the second attempt was much better.  With the humid weather here in Thailand, they crispness of the crust quickly gave way to a softer texture, but they were still very nice. 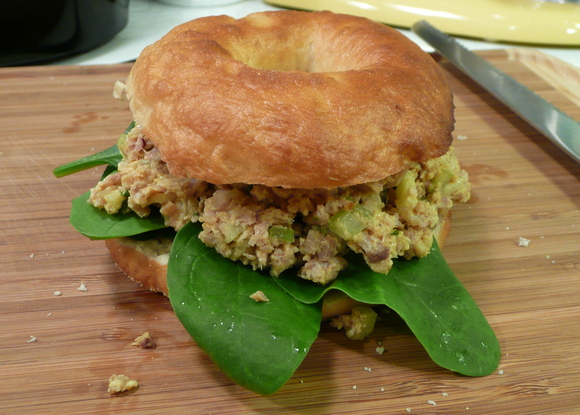 The ultimate test was to toast them and use them in a curried chicken salad and spinach sandwich.  There’s still some work to be done to get the bagels a little chewier, but I’m very happy with the way they turned out nonetheless.