During the final two years of high school, I had my first concrete thoughts of myself as a possible homosexual. As I started dating girls and gaining an adolescent awareness of my sexuality, it became clearer to me that while I had feelings for those girls, the feelings were not the same as the thoughts I was having about other boys. This recognition did not just suddenly shift into focus but was something that I realized over time.

It is the same feeling as when you are putting together a picture puzzle and you manage to fit two pieces together, but deep down you know that the fit isn’t exact.  You’ve forced it.  Slowly, I recognized that the fit wasn’t right, that I was forcing it.  And this recognition was filled with self-hatred.  I remember thinking, maybe I am like that but even if I am, I would certainly never act on it!

It is hard to convey the anguish I felt, a sense of disappointment in myself that was so great that I came very close to committing suicide. Reflecting back on this time of my life, it is a little embarrassing to share. It seems so over-dramatic and is such a poor example of the person I’ve become. But at that time, the pain of self-hatred, of fear of being different, consumed me to such a great degree that I thought that ending my life might be the only option.

There was one dark night when I was at home alone, huddled under my desk with tears running down my cheeks. I walked down the lightless hallway into the kitchen and pulled a knife from the drawer. The moonlight reflecting off the blade is still seared into my memory. The only thing that stopped me from killing myself was the sense that I had a few friends who I was certain, despite them not knowing about this part of me, would accept me as I was if ever they found out. 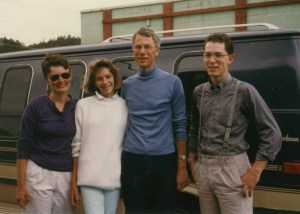 Growing up, I had many conflicts with my father, a rocky relationship that, without going into unnecessary detail, could be described as both of us failing to live up to our expectations of each other. I’ve come to believe that one of the hardest parts of being a parent is not imposing your expectations and aspirations onto your children, but instead giving them the room to be who they are. By the same token, the hardest part of being a child is realizing that no matter how they express it, deep down, your parents want only the best for you.

My struggle with my own identity was compounded by a sense of disconnection from my father and, by extension, from my family. By the time I had graduated high school and spent a few months at a local junior college, I realized I needed to leave home at find my own space in the world.

In January 1990 I moved to Los Angeles to attend the University of California at Riverside, a school where I knew just one friend. Arriving mid-way through the academic year made it challenging to build friendships but I soon found some, mostly through my work at the campus radio station. It was in the KUCR newsroom that I met the girl who I thought had changed everything and put my world to right.

Finally! What they said was right all along: I just needed to meet the right girl. We dated for several months and I thought things were going swimmingly. We became intimate and I thought that the sense of hollowness was finally filled.

Then one day while I was attending summer classes, she called me and said we needed to talk. She drove out from her parents’ home and, without warning or explanation and sitting in the unfurnished living room of the apartment she had just taken a lease out on, she broke up with me. To this day, I have no idea why. Was she seeing someone else? Had she figured out something about me that I had still not come to grips with? I don’t know.