Every so often, I encounter a book whose author has managed to give voice to feelings I have, points I want to articulate, and perspectives I want to share.  Fareed Zakaria’s “The Post-American World” is one such book. 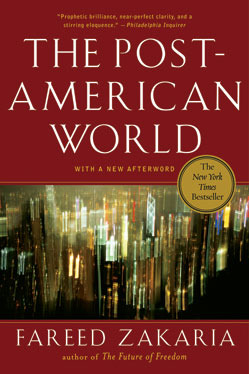 As an American citizen living outside of the United States for an indefinite period of time, I’ve been privileged to gain a lot of perspective on the world as a whole and America’s position in it.  Both living here as well as in Hong Kong a decade ago, I’ve seen things that make me want to run back to my fellow countrymen, shake them by the shoulders and deliver the message: The world is different than we thought!

Much like the ancients who thought the world was flat or that the Sun orbited the Earth, Americans are largely convinced that the United States is the most important country on the planet.  Yes, America is the “most” in several different measures, but the ugly truth is… that doesn’t make us the most important country.  There are other countries out there and their importance relative to their size, economic output, military power, etc. is definitely on the rise.

Zakaria, who was born and raised in India but has lived in the United States for a quarter century, is the editor of Newsweek International.  In his book, he describes “the rise of the rest” – the political and economic ascendance of countries such as China, India, Brazil, South Africa, Russia and Kenya.  He does not write about the fall of America, but rather how America’s position as the sole superpower will become a lot less lonely, and what that means for America.

The short answer is: we need to get real and get our act together.  This rise of the rest presents enormous challenges and enormous opportunities, if we are willing to recognize and act on them.

If I may, let me share one short excerpt that particularly spoke to me.  This is from his concluding chapter titled “American Purpose” in which he presents six guidelines for America to operate successfully in this new, post-American world.  One point he makes that particularly resonates with me:

“America has become a nation consumed by anxiety, worried about terrorists and rogue nations, Muslims and Mexicans, foreign companies and free trade, immigrants and international organizations.  The strongest nation in the history of the world now sees itself as besieged by forces beyond its control.  While the Bush administration has contributed mightily to this state of affairs, it is a phenomenon that goes beyond one president.  Too many Americans have been taken in by a rhetoric of fear.”

I encourage you to seek out and read this book.  It is incisive and well thought-out, drawing on the lessons of history and steering clear of partisan ideologies.  I hope you enjoy it.

0 thoughts on “The Post-American World”