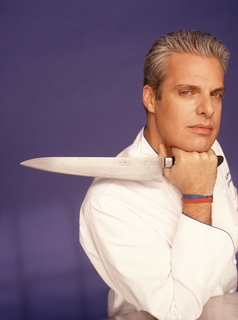 Of all the thoughtful wedding gifts we received from our friends and family as part of the “New York City Honeymoon” package, the gift certificate and reservations to Le Bernardin was the one about which I was most excited.  As a certified foodie, the opportunity to dine at a three-star Michelin restaurant was one not to be missed.  Now that I know what those three stars mean, I can define what food heaven must be like.

We modified our reservations – originally, dinner, “Billy Elliot” and the hotel were all scheduled for Thursday night – and chose 9:30 Wednesday for this gastronomic adventure.  We also invited my cousin Brad, so there would be a representative of the family to witness this event.

A little bit of background:  Le Bernardin is a seafood restaurant started in Paris in 1972 by siblings Maguy and Gilbert Le Coze.  They moved it to New York City in 1986.

After Gilbert died in 1995, Eric Ripert succeeded him as head chef.  Ripert, a 44-year old Frenchman pictured to the right, learned to cook in his grandmother’s kitchen and, unlike many celebrity chefs, still regularly works in his own kitchens.

In fact, you may recall an early episode of Anthony Bourdain’s “No Reservations” in which he and Ripert, a chef he has long admired, work a full shift in the Bourdain’s former kitchen at Les Halles, to see who has the stamina to still work in an everyday kitchen.  Ripert breezes through the evening while Bourdain is breathless and achey by the end. 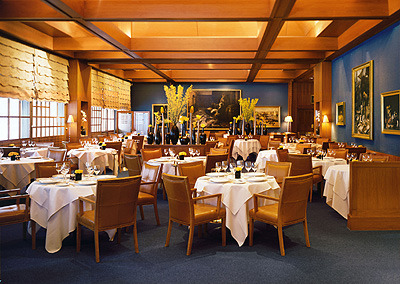 Le Bernardin is located on 51st Street between Sixth and Seventh Avenues, just on the north side of Times Square.  The dining room has a clean, contemporary design that looks a bit like a fusion of a French dining room and a Japanese sushi bar.  Jackets are required for gentlemen diners, something I rarely experience.

The menu has three options: Two tasting menus, which are $135 or $185 per person (seven or eight courses, respectively, $220/325 with wine pairing), and a four-course menu which is $109 per person.  With three of us dining, we went for the four-course option, which would allow us to sample up to twelve dishes.

The four-course menu verges on the overwhelming.  It has three all-seafood sections: “Almost Raw”, “Barely Touched”, and “Lightly Cooked”, which correspond to the degree of preparation.  Basically, you choose one course from each section, plus a dessert.  There were also four non-seafood items that could be substituted as requested.

Some examples of dishes we didn’t choose in each area:

As you can see, Ripert’s combinations are pretty fuss-free.  Usually, the main dish will have two or three complementary flavors, leaving the main ingredient’s flavors free to be explored.

Service during ordering could best be described as “unintrusive”, to the extent that I wish the person taking the orders had been a little more assertive in helping us navigate the menu.  I realize that for people who can afford to eat at these sorts of restaurants on a regular basis, such help may be unnecessary, but I found myself struggling with a third course that would follow nicely after the previous two.  When he came back and asked if we had any questions, I responded with a desperate, “Yes!”

Let’s take a look at what we ordered.  Lighting was subdued so even with my gorilla tripod, pictures came out a little dark. 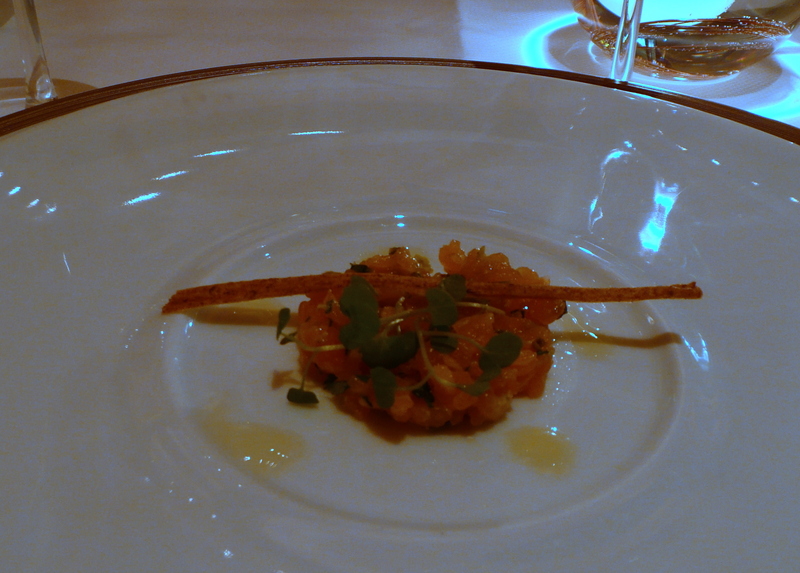 Amuse-bouche: a small portion of tuna tartare served with a citrus vinaigrette and micro greens.  Refreshing flavor really cleansed the palatte for the meal to come. 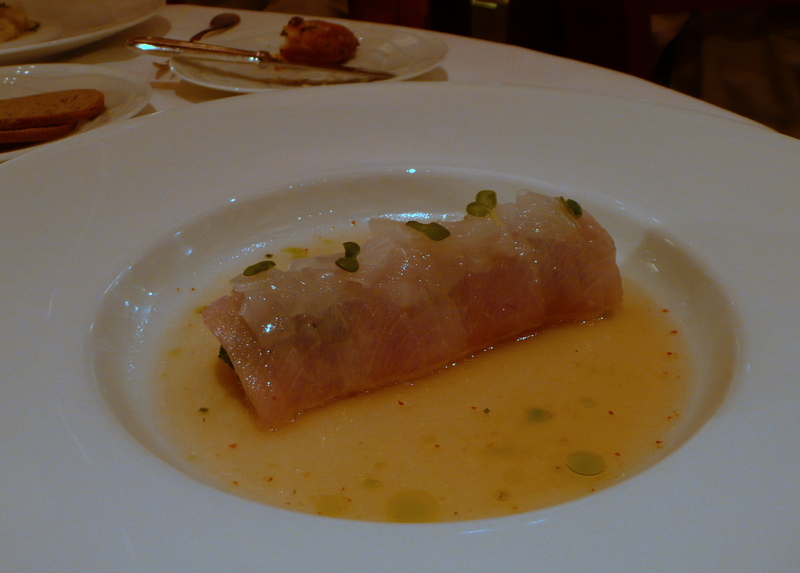 My first course was marinated Hamachi done Vietnamese style with a Nuoc Mam vinaigrette.  Truthfully, it tasted more Thai style.  The vinaigrette had a lot of lime juice in it, effectively “cooking” the meat with the acid.  This was very nicely prepared, although if the vinaigrette had been slightly less acidic, it would have been more pleasant. 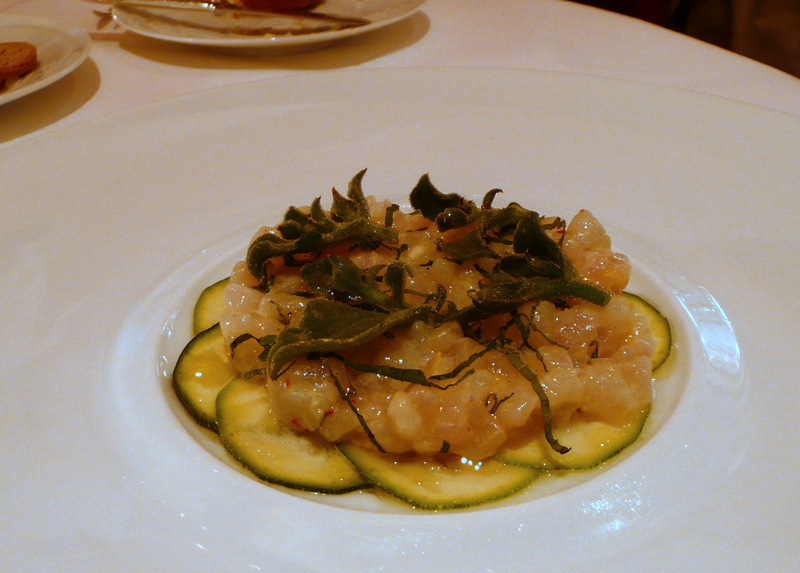 Tawn had the Black Bass tartare served with a mint and ice plant salad and chilled lemon nage (poaching broth).  This was a very nice dish, perfectly balanced flavors. 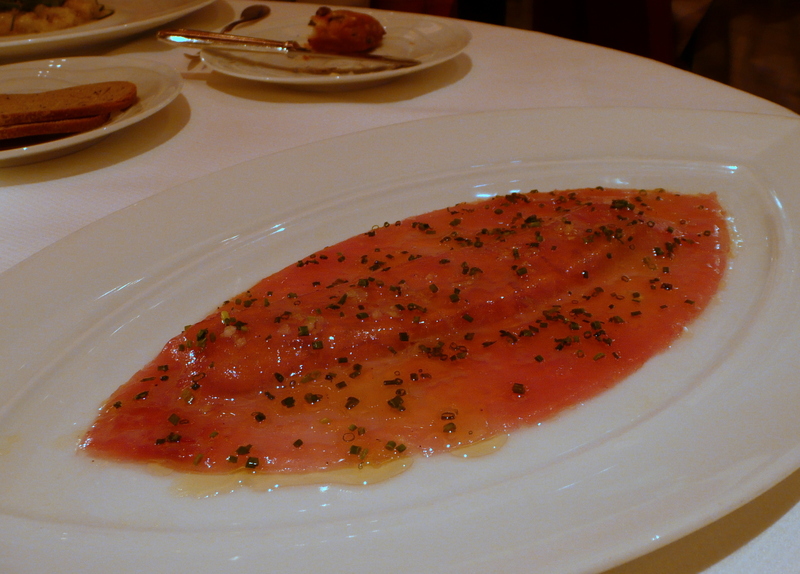 Brad enjoyed a starter of layers of thinly pounded Yellowfin Tuna, foie gras and toasted baguette with shaved chives and extra virgin olive oil.  This was another lovely dish that really showed off the flavors of the fish nicely. 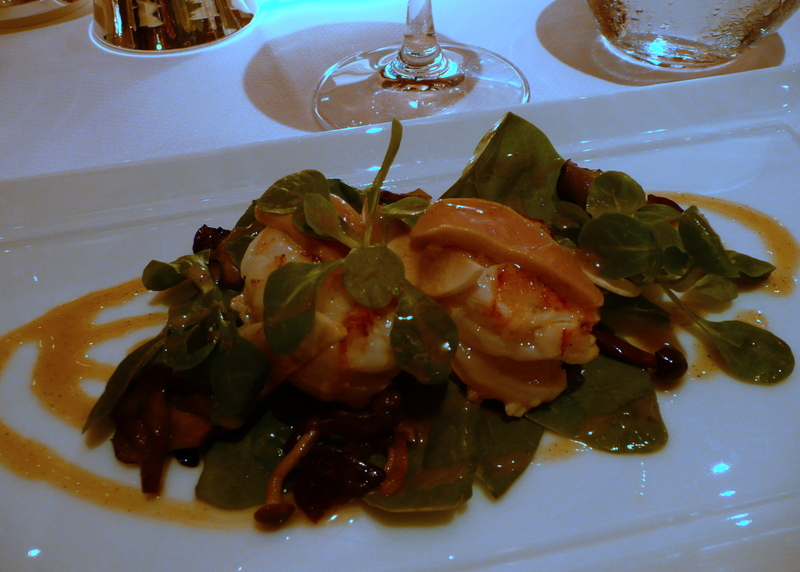 For the second course, both Tawn and I had seared Langoustine (a type of slim lobster) with mache and wild mushroom salad, shaved foie fras and a white balsamic vinaigrette.  This was a pretty hearty dish and was very nicely done.  The langoustine was perfectly cooked – not overdone or tough at all – and the salad’s eathiness went nicely with the rich flavor of the meat. 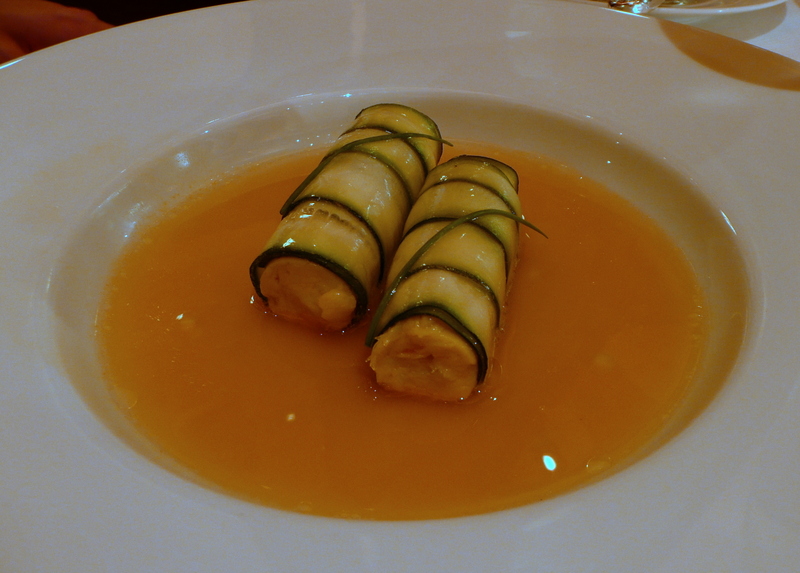 Brad’s second course was a curried Crab and zucchini panna cotta (being married to an Italian, Brad loves panna cotta), with vadouvan spiced broth.  (Want to know what vadouvan is?  Click here.)  This was really tasty, too.  The crab flavor stood up nicely to the more assertive notes of the curry seasoning. 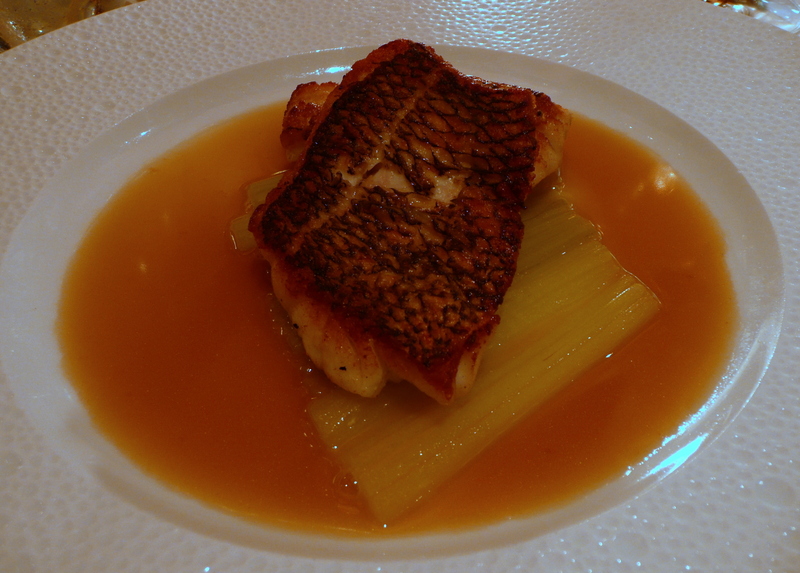 For the main course, I had a crispy Black Bass with braised celery and parsnip custard, served with an Iberico ham and green peppercorn sauce.  I had asked for a recommendation of a third course, not sure what would go nicely after the langoustine.  I had debated between this dish and a poached Halibut, and the order-taker steered me towards this.  It was also very nice, although the sauce cooled quickly in the air conditioned room and began to gel, creating an unpleasant texture. 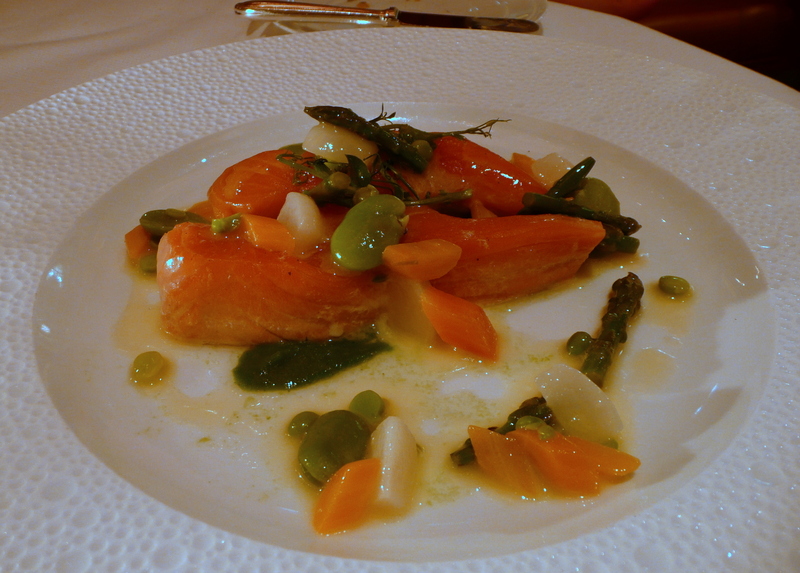 Tawn had the barely cooked Wild King Salmon with sweet pea and wasabi puree, spring vegetables and a citrus-yuzu emulsion.  I love my salmon a bit rare so I found this a really lovely dish.  Tawn, however, prefers his meat drier so for him, it was way undercooked. 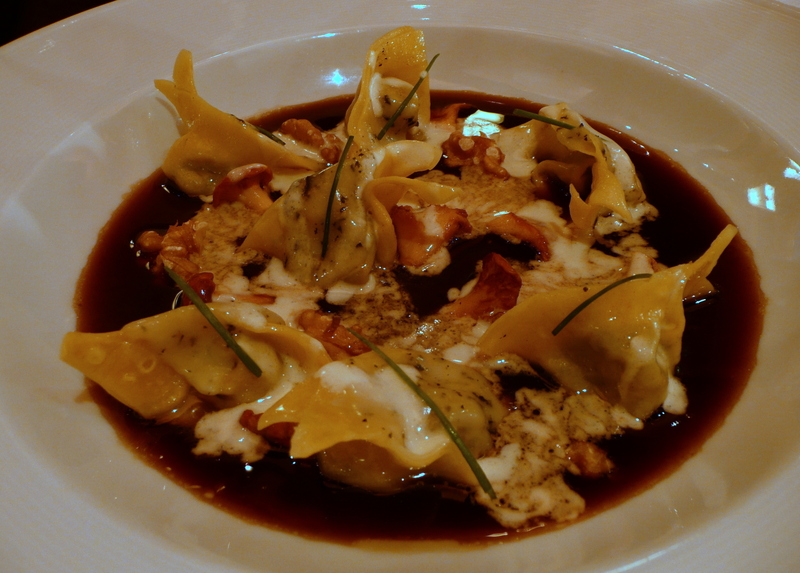 Brad, not a huge seafood fan, departed to the “Upon Request” section for his main, enjoying a buffalo mozarella tortellini with wild  mushroom consomme, nettle and a parmesan emulsion.  This was really good.  The consomme was really salty but very flavorful.

With our meal, we enjoyed a $50 bottle of Long Island rose recommended by Aldo Sohm, chef sommelier of Le Bernardin.  In fact, he’s been named the best sommelier in America and won several awards.  This is the first time I’ve been to a restaurant where the wine was tasted (using a little silver cup attached by chain to the sommelier’s waist) before being poured.  Sadly, I didn’t make note of the winery from which the bottle came, but I’ve enjoyed many Long Island wines during other meals in New York City.  One of these days I’ll have to travel out to Long Island again, this time for the purpose of wine tasting. 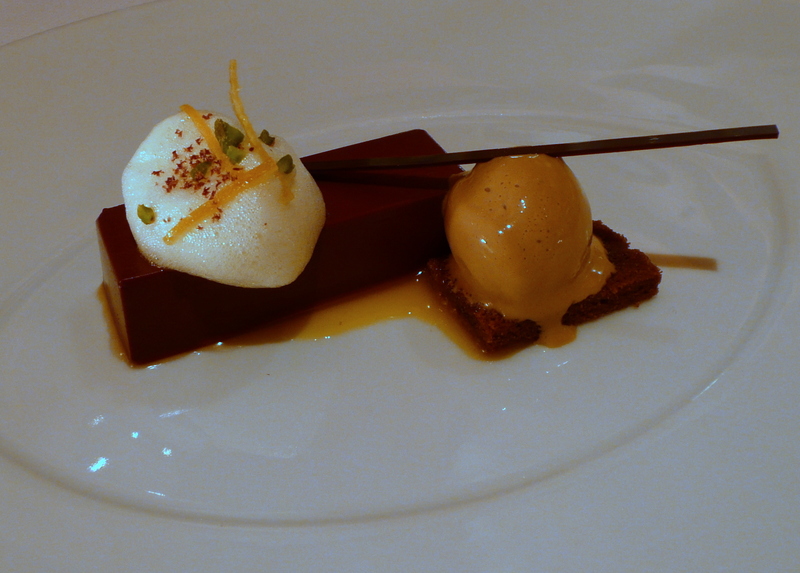 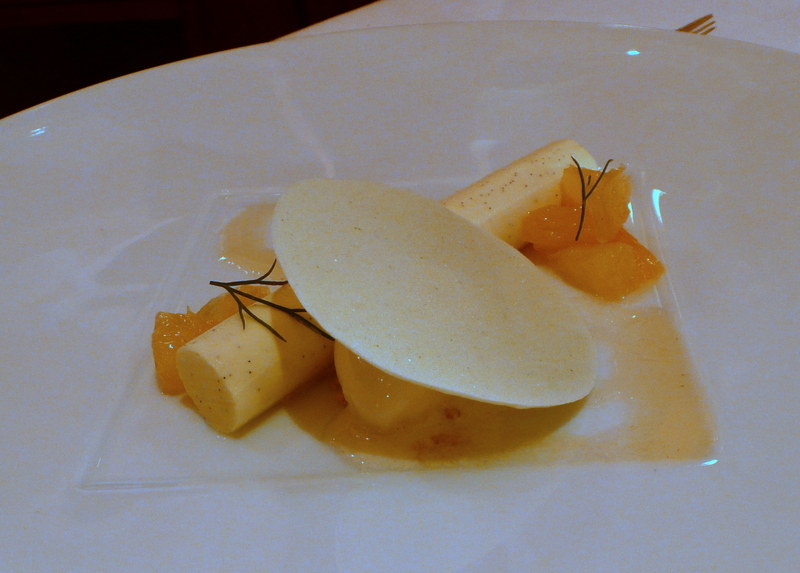 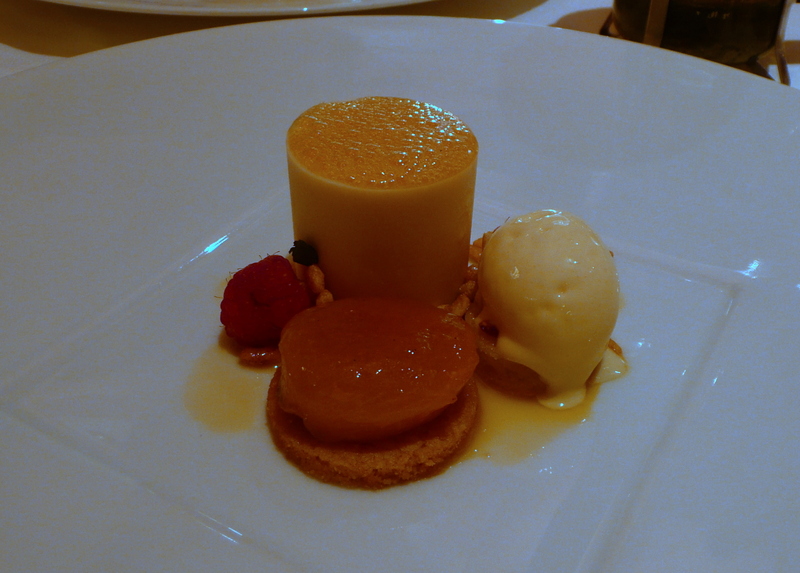 I had the vanilla poached apricot, with apricot cream and coulis wrapped in white chocolate, with noyau ice cream.  (Noyau being a French liqueur made from brandy and apricot kernels.) 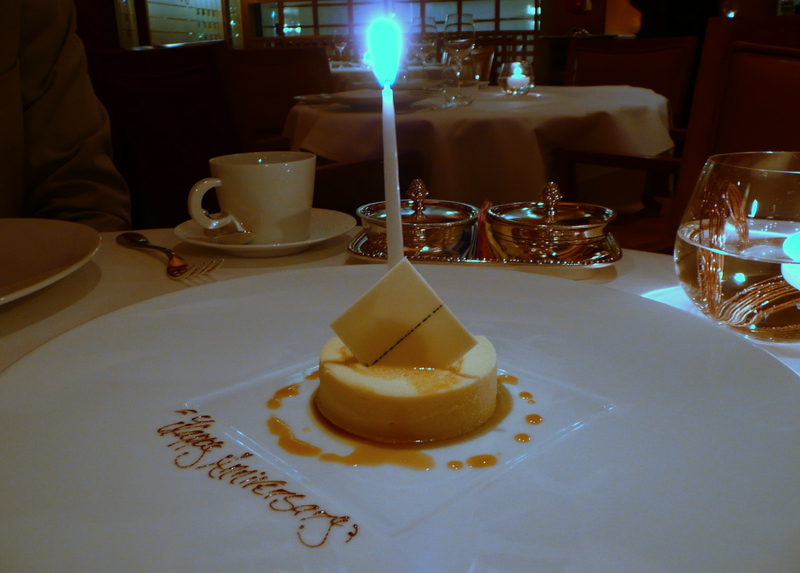 Additionally, having been informed when the original reservation was made that this was a special occassion, the kitchen sent out a complimentary “happy anniversry” cheesecake.  Yes, our fifth day anniversary, I suppose. 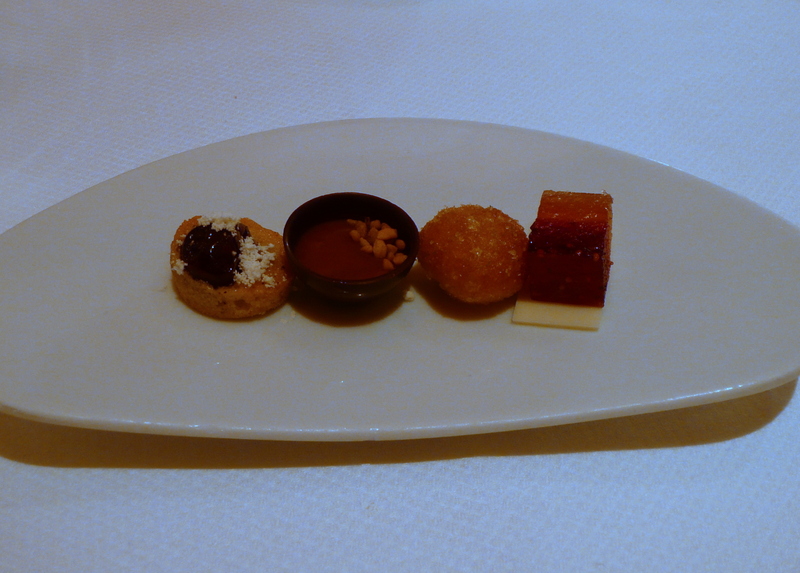 After it all, some petits-fours were served.  These were actually better than the desserts themselves, if you want my opinion.  Four little bites, each different, each wonderfully done.  The desserts seemed a little fussy, compared with the meal itself.

All in all, it was a pretty amazing meal experience.  The fish dishes were really well-prepared and very enjoyable.  The service throughout the evening was of the highest calibre.  We went through more silverware, and more differently designed silverware, than I ever knew existed.  Did you know that there are a half-dozen different types of fish forks, depending on the type of fish being served?

If I may make an observation, though: my experience at Le Bernardin reinforces my opinion that “fine dining” is in the eye of the beholder.  You don’t necessarily need to spend a ton of money in order to eat very well-prepared food.  Thinking back to the dinner I had at Orris in Los Angeles, I’d say I enjoyed that dining experience every bit as much as I enjoyed this dinner at Le Bernardin, when it comes strictly to the food itself.  Sure, the service and atmosphere at Le Bernardin were ten times more sophisticated than at Orris, but when it comes down to the most fundamental thing – the food – both were very good.

That’s not to say I didn’t enjoy Le Bernardin – it was a fantastic dining experience and a spectacular way to celebrate our marriage.  But for those of you who may feel like you’ll never be able to afford to eat well, I would stress that eating expensively isn’t a prerequisite for eating well.  Many of my readers are foodies, too, and I’m sure they’ll agree.

So that’s a wrap on the New York entries.  We returned Monday morning to Krungthep and are settling back into work and our regular routine.