It started innocently enough.  We called the air conditioning service company out to move a unit from one room to another and install a new unit.  A simple procedure that should have been unworthy of note.  And yet it managed to develop into an unfinished saga, a tale needing to be told in a blog entry.

Unlike homes in the United States, which have central heating and air conditioning, homes in Southeast Asia have a much more efficient and tidier solution: individual units in each room.  This way you are only cooling the space you occupy, instead of the entire house.

About six months ago, the unit in bedroom A finally failed.  It was probably ten years old and despite many service calls, it was time to replace it.  The new Mitsubishi unit with the “smart eye” sensor was efficient at cooling, but Tawn felt like it made a little too much noise and was disturbing his sleep.

A few months later, the unit in bedroom B also stopped cooling.  Since that bedroom is at the corner of the building and gets a good cross breeze when the windows are open, I’ve been content to save money on electricity and just spend my days working with a fan and the breeze to cool me off.  As the weather has become hotter – a string of days in the mid 90’s with little breeze last week – I finally cried “uncle” and asked Tawn to call the air conditioning company.

We’ve used this company, based on a recommendation of a friend, for more than two years and other than the occasional lack of attention to detail – which seems typical of most manual workers here in Thailand – we’ve been pleased with their work.

Tawn arranged for them to come out and do three things: move the “new” unit from bedroom A into bedroom B (removing the broken unit in bedroom B and disposing of it), install a new, quieter Panasonic unit in bedroom A, and then clean the remaining unit.

The team of five workers and one supervisor showed up Wednesday afternoon with a new Panasonic air conditioner and compressor and set to work.  It was kind of a circus act, in all meanings of the word. 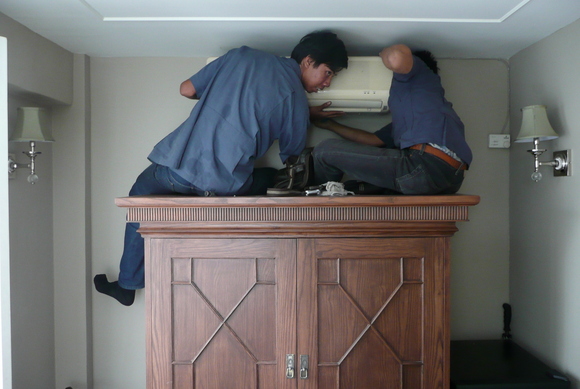 They were like contortionists, squeezing themselves into the space on top of my work armoire, which is quite heavy to move.  This is in bedroom B and contains my computer, printer, etc.  I have no idea if it is constructed solidly enough to have two people sitting on top of it. 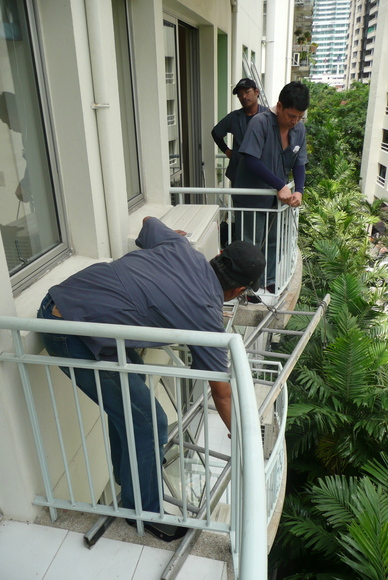 They were like high wire artists, improvising a scaffolding between our balconies in order to get to, remove and reinstall the compressor.  What did they use?  An aluminum ladder.  Because of the position of the compressor, the ladder wouldn’t rest on both balconies, so they simply used a rope to tie one end to the balcony railing. 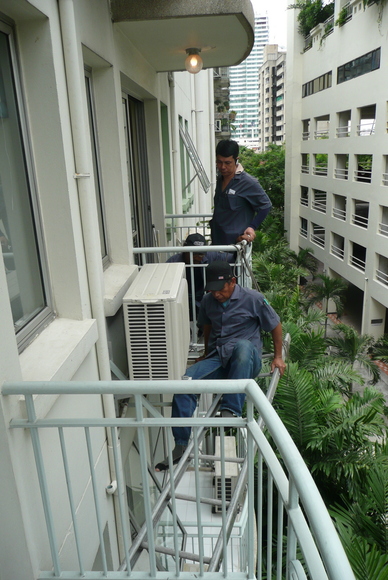 Yes, he sat out there, four stories above the car park, working on the unit.  When I exclaimed that it seemed rather dangerous, he assured me that he had done the same thing the other day on the tenth floor of a building. 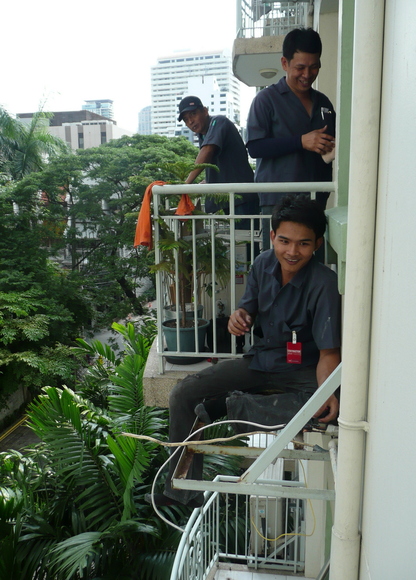 Even more daring, this young man is sitting on the compressor support frame that is bolted to the concrete wall.  I would assume that it was installed when the building was completed ten years ago.  Now, he’s a pretty small guy – maybe 110-120 pounds – but even at that weight I still wouldn’t be sitting out there! 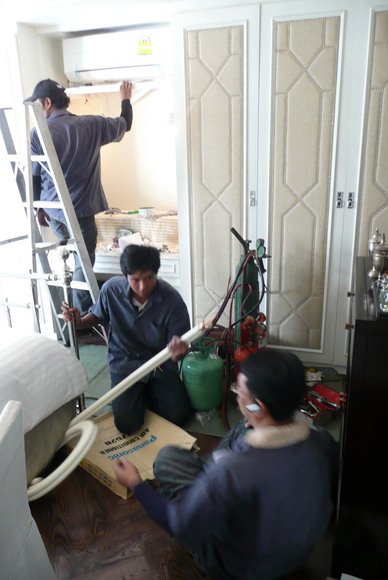 Continuing the circus motif, they were also a bit like the clowns that climb out of the impossibly small car.  They had more equipment spread around the condo, six of them stumbling over one another, dripping water everywhere and generally making a mess that didn’t get very effectively cleaned up until I did it.

All of this would be well and good if the story ended there with the new unit installed, the previous unit relocated, and the condo properly cooled.  Unfortunately, that isn’t how it turned out.

Wednesday night we turned the air con unit in bedroom A on and it ran cool and quieter than the Mitsubishi unit that had been in there before, but by the middle of the night it seemed like even though we had it set to 22 C (about 70 F) it wasn’t that cool.

Thursday, Tawn called the service company and they said they would come out on Saturday and take a look.  But Thursday night when we turned the unit on again, it wouldn’t cool at all.  You could hear the unit drawing power as if to turn the compressor on, but it didn’t cycle on.

We had to sleep with the bedroom door open and the units in the rest of the condo running full, with two floor fans directing the cool air into the bedroom and circulating it.  Not the most efficient way to cool things and I can’t wait to see how high our electricity bill is next month.

Friday morning Tawn called them again.  He told them that they needed to come out that afternoon.  The owner, whom Tawn had tried to track down, had just left for a week’s vacation in New Zealand, so he couldn’t get hold of anyone who would accept responsibility and authorize replacing the unit.

One thing Tawn wanted to avoid was them trying to repair the unit they had installed.  In his mind – and I agree – if it is already having problems on day one, then it is going to continue to have problems even if various parts are replaced or repaired.  Better to pull it out and demand a new unit.

Friday afternoon the team showed up, inspected the compressor, and pronounced that there had a fatal flaw.  Tawn insisted they take the unit out entirely and bring it back to their office until the owner returned from holiday.

So here it is Monday night.  Tonight will be our fifth night sleeping with the multiple air conditioning units and fans running to keep us cool. I’m thinking of dragging the mattress out to the living room, but then if guests come over that might be a bit awkward.  And we do have guests in town so the likelihood of that is high.

I wish there was some neat ending to this story.  Some, “and it all turned out wonderfully in the end” that I could add.  Unfortunately, there isn’t, yet.

0 thoughts on “The Air Conditioner Drama”