The Thai Meteorological Department announced that Monday April 27th would be the hottest day of the year, as it was the apex of the sun’s seasonal arc across Thailand.  As we inched towards that day the weather became hotter and hotter, leaving few doubts that their prediction would hold true.

But then in the midst of the high temperatures a few days before, the forecast began to crack: a high pressure system was descending from China and instead of the hottest day, the 27th would instead be a preview of the coming rainy season, which the department announced would officially begin May 15th. 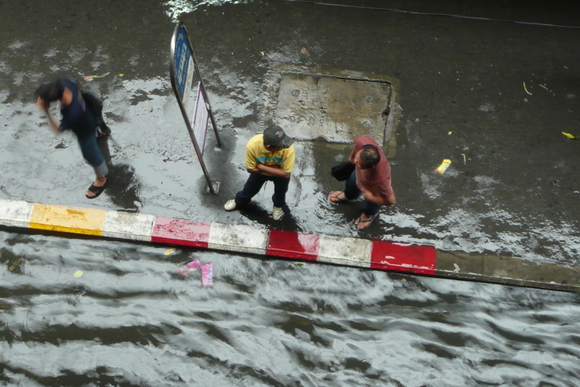 Sure enough, by lunchtime Monday the thunder and lightning was upon us and rain fell for nearly two hours in a steady downpour.  By the time I tried to return home I found our soi flooded.  This often happens when it rains as the city lies low and its water system struggles to handle a deluge, but it usually clears out quickly.

The water reached levels I have not seen in our two years here on the soi.  I couldn’t find a motorbike that would attempt to traverse the waters so I walked home, eventually up to my shins on the flooded sidewalks.

Here’s a video compilation of the storm set to a wonderful song, “Come In Out of the Rain” performed by Chicago jazz vocalist Audrey Morris.

0 thoughts on “The Hottest Day is Doused”