Since you may not have a chance to read it yourself, I’m sharing an op-ed piece byPaisarn Likhitpreechakul written for The Nation, one of Thailand’s two English language daily newspapers. 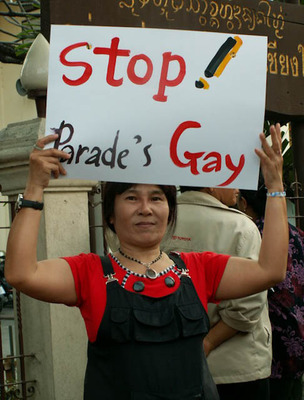 Without equality, tolerance for gays is just a myth

SPECIAL TO THE NATION

Thee’s a myth, especially among foreigners, that Thailand is “tolerant” towards gays and transgenders. After all, hardly a day goes by without one seeing ladyboys or katoeys (male-to-female transgenders). Most Thais also like to believe in such a feel-good story, as well as spin it to foreigners. To say anything to the contrary will cause a loss of face. However, that kind of simplistic rationale based on visibility is akin to reasoning that Thai women must have equal rights to men because every other Thai appears to be female.

Even long-term foreign residents aren’t likely to have heard about, for example, a bisexual woman who was burned alive in 2006, and the rape, murder and burning of a lesbian last year. Both cases were reported only in the Thai dailies. Rarely will they pick up stories on constant harassment and discrimination against katoeys, whose life options are severely limited. These “non-issues” are often brushed aside by Thais.

The shutdown of the Chiang Mai Gay Pride parade in February burst the “gay paradise” bubble of many who now scramble to explain the violent display of homophobia by the Rak Chiang Mai 51 group. Alarmingly, even after shutting down the event, this particular red-shirt group continues to use its radio station to incite violence against gays and katoeys.

More liberal red-shirt supporters argue that homophobia is not written in their ideology. It needn’t be. Preying on unpopular groups is a classic political tactic. Rak Chiang Mai 51’s violence may be the most extreme case, but they were only trying to score points from the deep-seated homophobia in Thai society at large. 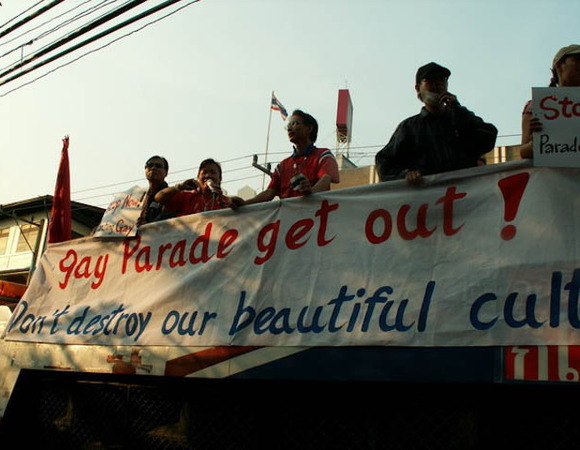 And they were not alone. While spreading outrageous accusations as facts, the local media shut their eyes and ears to the explanation of the organising NGOs about the parade’s cultural sensitivity and its human rights and anti-HIV objectives.

Similarly, government agencies including the governor’s office showed disapproval of the event, irrationally claiming that it would tarnish Chiang Mai’s culture.

Their concerted opposition was then used by the disrupters to justify their action. Finally, the police not only didn’t help, but even pressured the organisers to apologise to the abusers. None of these actors have so far take responsibility for the incident, showing implicit approval of the homophobic violence.

The past few years have shown the extent to which the Thai public is willing to allow homophobia. During their Sanam Luang protest, yellow-shirt protestors comfortably got away with a giant main stage sign taunting a political enemy with homophobic slander. Their mouthpiece, Manager newspaper, perpetrates the same practice.

But homophobia is far from new in Thailand. Despite the Buddha’s core teaching of compassion, many Thai “Buddhists” believe that homosexuals and transgenders deserve low social status in the present because they supposedly committed sins – specifically adultery – in their past lives. Some even believe that homosexuality and transgenderism are, by themselves, sexual misconduct.

The cultural aspect of homophobia was obvious during the Chiang Mai incident. Some of the disrupters’ signs branded gays and katoeys as “kheud” – a northern term for “inauspicious” or “unlucky”.

Foreigners, naturally, are unlikely to be subject to such treatment. Rak Chiang Mai 51 even took the trouble of going around the city with loudspeaker trucks to warn foreigners to stay away from the event for risk of getting hurt.

Thailand’s superficially observed “tolerance” for gays and katoeys is in fact the result of the non-confrontational culture. While disapproval of lesbian, gay, bisexual and transgender (LGBT) people is not worn on most people’s public sleeve, the anonymity of the Internet, however, is rife with homophobic comments made in private.

The truth is, Thai-style “tolerance” only applies when you stay put in your place according to the cultural pecking order. Unsurprisingly, Chiang Mai Gay Pride organisers were told by the authorities that there would be no objection if the parade was held on some back streets and other activities shifted to inside a hotel.

The violence in Chiang Mai shows what happens when people refuse to stay put in their place and start demanding equal rights. Exceptions to the non-confrontation rule burst out when homophobia finds its outlet in those in very high or very low groups who think might makes right.

Some may view the concerted homophobia in Chiang Mai as an isolated occurrence, but it in fact sits well in the company of Rajabhat Institute’s 1997 initiative to reject students who are “sexual deviants” and the Ministry of Culture’s 2004 plan to get rid of the “homosexual presence” from television. These latter two examples of institutional homophobia are more worrisome. Political dissenters can shut down a gay event but it’s actually power-wielding civil servants who can arbitrarily shut down civil rights under the legitimacy of government. 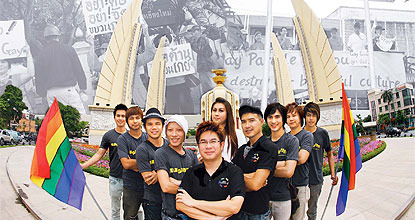 Despite Article 30 of the present constitution, which prohibits discrimination on the basis of sex, including sexual orientation and gender identity, Thai governments have yet to show signs of recognising the equal rights of LGBT people. The number of laws to ensure equality and non-discrimination for LGBT people remains the same: zero.

It is time the government re-examined the Foreign Ministry’s claim that saying yes to the statement would affect relationships with countries with gay-hostile cultures.

To reject LGBT rights – an integral part of human rights – in favour of special treatment for cultural jingoism will expose Thailand’s lack of integrity and encourage more homophobia on home turf.

To prevent the Chiang Mai incident from repeating itself elsewhere, the government must reaffirm all constitutionally guaranteed human rights as the minimum common denominator across the country.

Campaigning in Pattaya for the general election, Democrat Party leader Abhisit Vejjajiva said in 2007 that, “The Democrat Party hopes that Thai society will recognise human dignity for all persons including those of the “third sex” … All of us must put the highest priority on human rights, liberty and equality. There should be no discrimination on the grounds of sex. Society should accept the differences as they exist in the modern world.”

Now that he’s become the country’s leader, it’s time he makes good on those words. Or else, his government will continue to raise doubts on its human rights commitments.

The first step is to sign the UN non-discrimination statement, as US President Obama belatedly did by reversing the position of his predecessor. After that, he must bring to account government offices in Chiang Mai for tacitly condoning homophobic violence.

This will send a powerful signal throughout the country and the world that Thailand has no place for homophobia and that tolerance can only begin when all persons stand in equality, not the cultural pecking order.

0 thoughts on “Op-Ed Feature from The Nation: Without Equality, Tolerance is Just A Myth”