For the first time this year, rain fell in Krungthep.  After several days of increasingly hot and increasingly humid weather, the clouds built and the wind fell still.  Then, on the way home from my Thai lesson, the wind picked back up and the temperature dropped several degrees.  Halfway down the soi, riding on the back of the motorcycle taxi, the first drops fell on me.  There was that smell: the first rain of the season evaporating on the oily, dusty pavement.

We have several ferns on our balcony, very pretty ones.  Tawn and I are having a debate as to the cause, but about three weeks ago all the fronds turned yellow and fell off.  In the following days a dozen new fronds sprouted and took their place.  Tawn thinks that this is just the season when ferns drop their fronds.  I think he overwatered (there was an inch of standing water in the saucer below the pots) and killed the fronds.  Any fern experts available to help settle this matter? 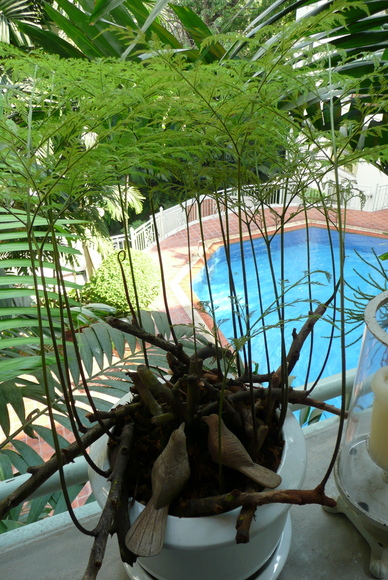 On Saturday we went to the travel fair at Queen Sirikit Convention Centre.  I tell you, if you have some free time in the next month or so, there are some amazing deals to be had.  25,000 baht to Australia on Singapore Airlines.  33,000 baht to London.  All sorts of deals on resorts here in Thailand.

Unfortunately, our travel plans for the next two months are already booked, so we couldn’t take advantage of these deals.

We did, however, find some ninjas at the Yokoso! Japan booth.  These were real Japanese and they even spoke Thai, too.  Impressive, huh?  Probably not real ninjas, though. 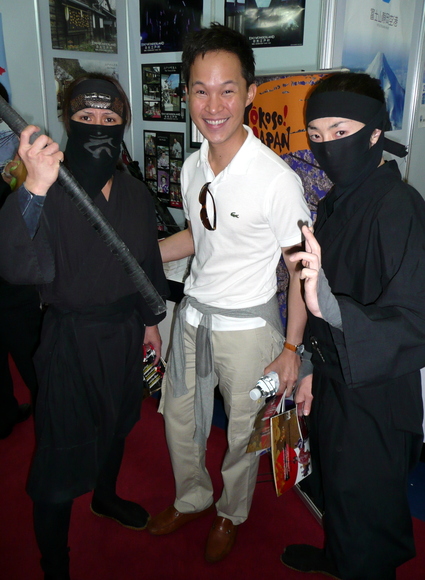 There is something odd about the stereotypes the Japanese tourism authority is trading in.  But if it gets people to visit (like we are in April) then I guess it works.

Best “must-see” item from the brochures: the Ramen Museum in Yokohama.