You can take this with a grain of salt, but the local papers are reporting that the Airport Express rail line – which will link downtown Bangkok with the new (well, three years ago) Suvarnabhumi Airport – is scheduled to open on the Queen’s birthday, August 12.

There may be some truth to this as a test run was completed from the Makkasan station (main in-town terminal) and the airport, conducted at normal speed.  The test was successful and the train made it the length of the route in just fifteen minutes, as planned.

Curious, I headed over to the Phayathai Skytrain station, which is where the Red Line, as the airport line is known, will connect with the Skytrain.  That section of the track was not tested last week, but it does look like a lot of progress is being made, below. 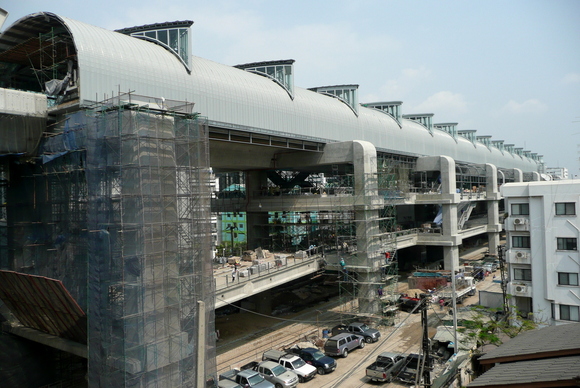 The real question, of course, is why the project is so delayed in the first place.  After all, the plans for the airport were on the shelf for decades, the actual construction took over five years, so it wasn’t as if the airport suddenly opened up and surprised everybody.  Oh, look!  An airport!  We weren’t expecting that.

While at the Phayathai Station, I spotted what I think may be the root cause of the delay, below. 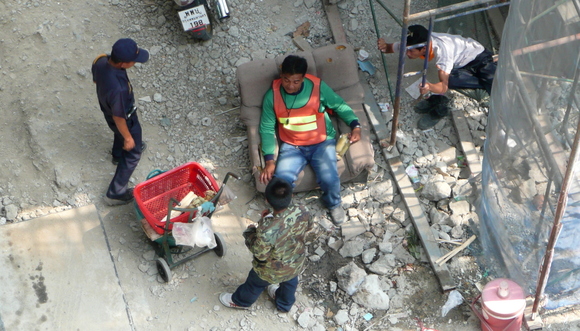 Yes, the construction workers look a little pampered, in my opinion.  Three people catering to their every need, a comfy recliner to sit in.  Just how much construction actually gets done each day?

In all seriousness, though, if this line is anything like has been promised – the ability to check in for your flight (and to check your bags, too) at the in-city terminal – then we’ll have a major advance for our visitors as well as traveling locals.