It isn’t enough to just go and see the fruits and vegetables being grown in the Chia Tai demonstration gardens.  You have to eat them, too!

It turns out that they weren’t too happy when I attempted to pull a carrot out of the ground and see how it tasted.  Instead, security suggested I head over to the food tents to satisfy any hunger pangs.

Sure enough, amidst the rows and rows of processed foods manufactured and sold by parent company CP Foods (they audaciously sell their label of frozen entrees called CP Fresh Mart, which you could select from a freezer case then they would microwave them for you on the spot – not a hundred steps away from acres and acres of fresh produce!), there was actually a few stalls selling freshly-prepared food items. 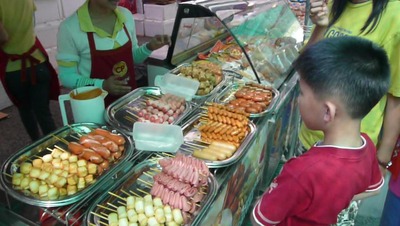 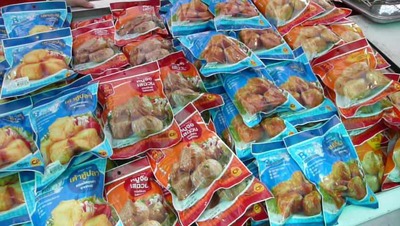 I counted three items for sale made from (presumably) local produce: steamed pumpkin buns, pumpkin donuts, and steamed corn on the cob. 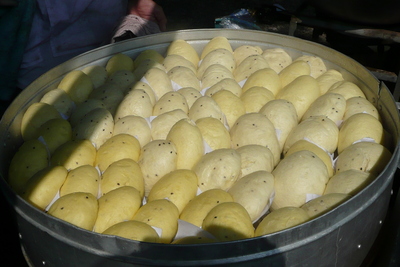 The pumpkin buns, made from a yeast dough in a process described in the video below, were light and tasty and I could have easily eaten a dozen of them.  The pumpkin donuts, below, were even more amazing.  I don’t think I’ve ever had a lighter, less oily donut.  Krispy Kreme take note! 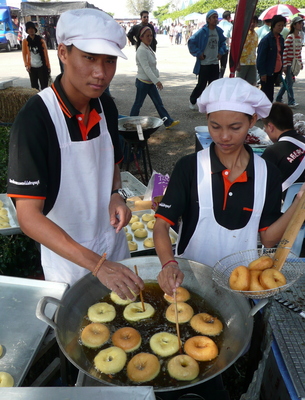 Here’s a two-minute video that will tell you all about it.

22 thoughts on “Eating at the Chia Tai Agricultural Fair”