As 2009 came to a start, our trip to the US came to an end.  Wednesday morning, Jenn and Kevin and the girls drove us up to the airport for our flight back to San Francisco.

The girls had been moody all morning, their usual reaction when we are leaving them.  Emily wasn’t willing to get out of the van when we reached the airport, right.

Seems mighty stubborn to me, especially since her sister was willing to get out of the van and join us on the curb of the terminal for one final photo, below.  But then, Emily is a “cut off your nose to spite your face” kind of person. 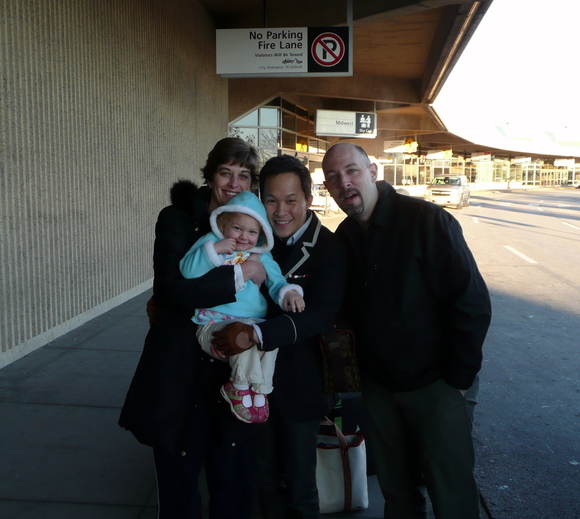 The three and a half hour flight back to the West Coast was smooth.  There was a heavy layer of fog over the bay and we actually didn’t pull out of the fog until we were crossing the runway threshold, something that appeared to be near the limits of acceptable landing visibility.

For these final two days in SF, we rented a car.  With the New Year’s holiday, we knew that parking enforcement wouldn’t be much of an issue and as we had some engagements in the East Bay, having a car would be very helpful.

Wednesday evening, New Year’s Eve, I surprised Tawn with tickets to see The Phantom of the Opera, which is showing right now at the Orpheum Theatre.  I have seen this show three times before but Tawn never has, so it was a nice treat.  John Cudia made for a very effective Phantom but overall the show’s production was just okay.  I think the audio system at the Orpheum is not very good, more like listening to an AM radio than is okay for such expensive tickets.

Still, it was fun and we spent the evening together, which is what is really important. 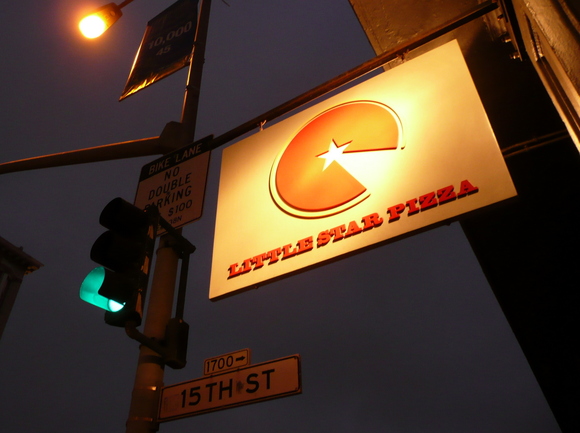 We preceded the show with an early dinner at Little Star Pizza.  With two locations in SF, we walked to the Valencia and 15th street branch.  They do deep-dish Chicago style pizza, along the lines of what Zachary’s in Berkeley provides.  My one complain with Zachary’s is that their crust isn’t very good.  Sure enough, Little Star has this problem solved with a buttery, cornmeal-laden crust that is much more substantive and tender than Zachary’s. 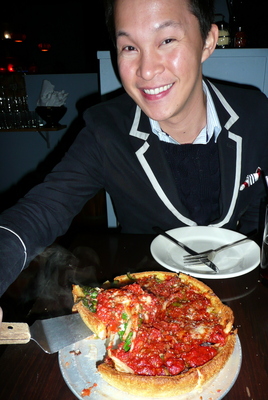 Click on a thumbnail for a larger version.  From L to R: Caprese salad with tomatoes and wonderful fresh mozzarella cheese; a deconstructed garlic bread with bread, butter and a roasted bulb of garlic – spread it yourself; a “small” pie, half with the Little Star special (spinach, onions, feta/ricotta/mozzarella cheese) and half with the Classic (mushrooms, sausage, peppers and onion).   Heavenly.

New Year’s Day we awoke relatively early since we were just climbing into bed when the fireworks went off the night before.  We walked down to Tartine for one more taste of their lovely pastries.  Below, a view into their kitchen with Guererro Street reflected. 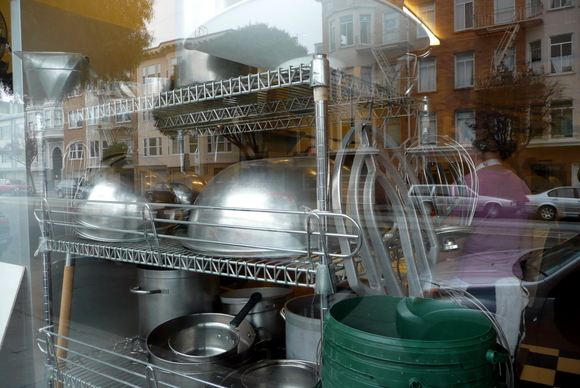 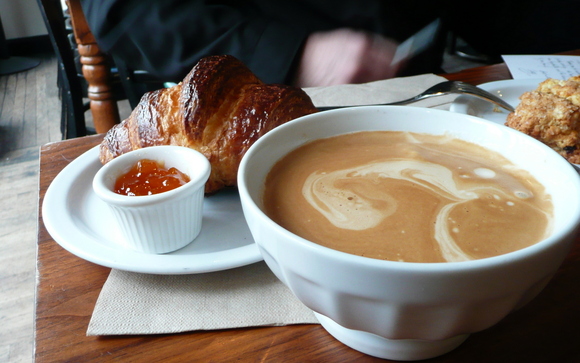 Above, the best croissant I’ve tasted outside of Paris with a bowl of latte.

The Mission District is a fascinating neighborhood with lots of little gems like Tartine.  Another gem, just down 18th Street from Tartine, is the Bi-Rite grocery store.  Lovingly maintained, it has a retro feel but a very contemporary selection of foodstuffs. 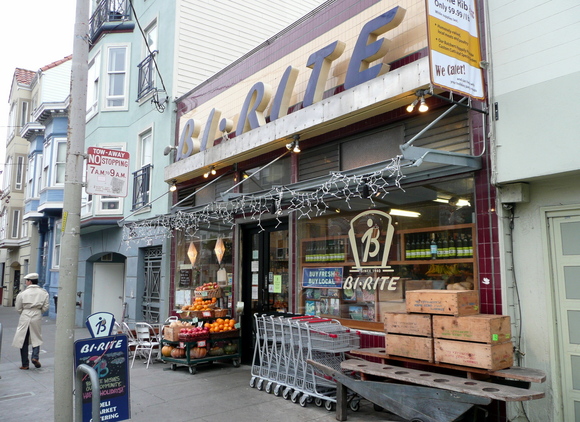 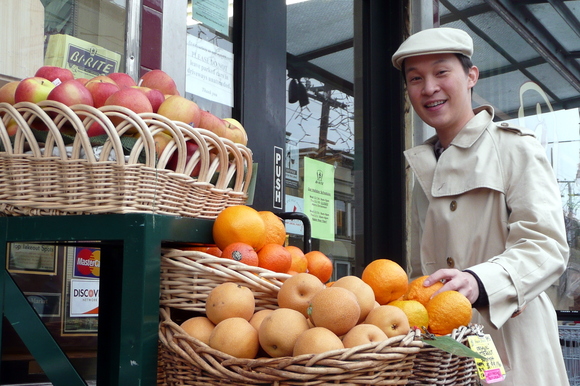 Above, Tawn ponders the selection of fresh fruits and veggies.

We walked back through the Castro and then back down Market Street to Anita’s in order to get some exercise.  There was a pretty side street with leaves that looked autumnal, strewn in the gutters and on the cars. 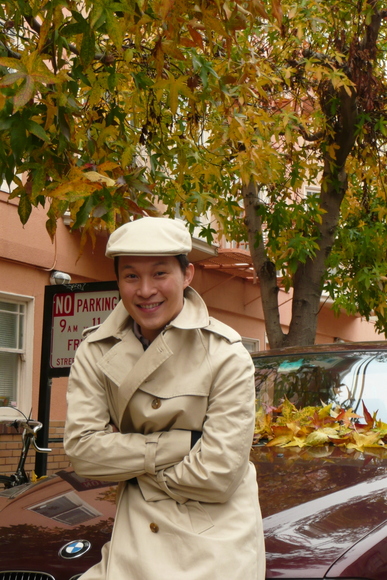 Speaking of cars, we rented a Toyota Prius hybrid, the first time I’ve ever driven one.  What a weird and wonderful vehicle!  No ignition switch; just a on/off button.  I spend the drive watching the efficiency display, moderating my speed and trying to keep the efficiency as high as possible.  So far we have driven 120 miles and have a 44.3 miles per gallon average.  The needle on the gas gauge has barely moved. 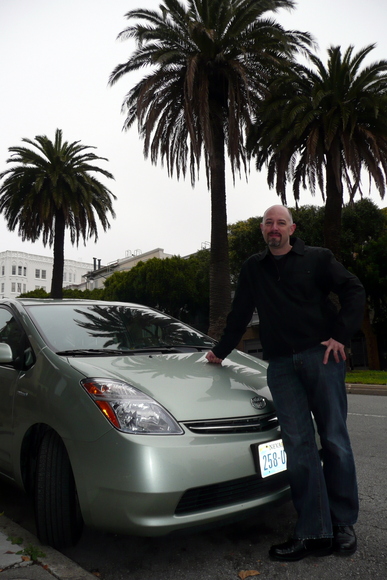 After Tartine we drove over to the East Bay, stopping in a my aunt and uncle’s house for a New Year’s brunch.  Everyone was there, including my cousins Alex and Bill who had flown up from Long Beach the night before.  Below, my cousin Patrick holds Logan, the son of family friends and a frequent topic of Alex’s blog. 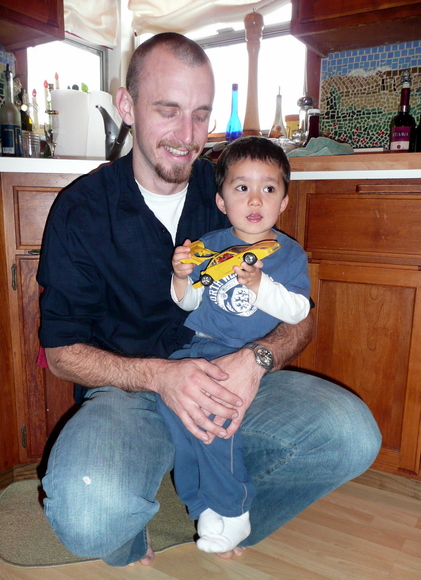 After a visit to Bruce and Howie’s in San Ramon, we returned to the city to face the most difficult task: packing.  The last item we purchased on our list was a new comforter at Macy’s.  There was a sale and we paid a nice, low price, but getting a comforter into our suitcase is proving to be a challenge.  One that has not been solved eight hours before our plane departs.

We enjoyed some mid-afternoon bottles of champagne with Anita, Lilian and Tanya, then set out for Cha Cha Cha, the “all-powerful” Cuban tapas restaurant that is always on our to eat at list.  The Mission District location was busy but the wait wasn’t too long, a wait shortened by a pitcher of sangria. 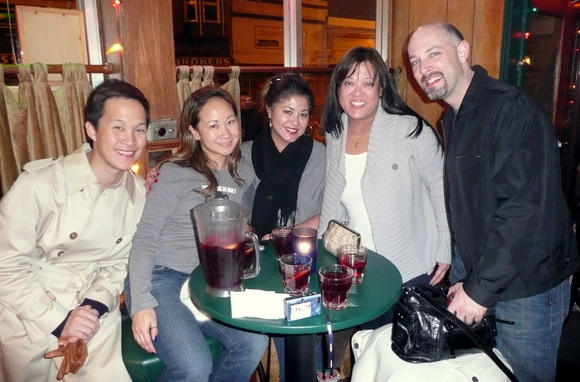 From the left: Tawn, Anita, Tanya, Lilian and me.

We had a wonderful time and once we returned home, were too exhausted to do any further packing.  Which is why, as soon as I finish this paragraph, I’m going to return to tackling the comforter problem.  We leave this afternoon.