You may have noticed some subtle changes to the look and feel of my blog.  After several years keeping things the same, I wanted to freshen things up a bit.  Xanga has all these “themes” and different ways to customize your page, but I find them difficult to use.  Plus, I have only enough HTML coding knowledge to be dangerous and not much more.

The “christao” logo was designed by my cousin Alexandra, a talented graphic designer and illustrator.  Hopefully, you enjoy the new look.

Today is Constitution Day here in Thailand, the day when we celebrate the twenty different constitutions we have had since the start of our on-again, off-again experiment with constitutional monarchy in 1932.  The news says that we may be days away from a new government, with the Democrat Party forming a working coalition for the first time since 1995.

Here are some odds and ends: 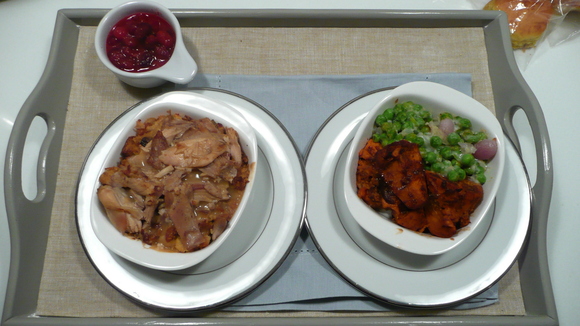 Thanksgiving leftovers are finally finished, more than week after we celebrated.  The extra turkey was immediately frozen in smaller packages but the stuffing, sweet potatoes, peas, cranberry sauce and pecan pie lasted a long time.

I have to share with you, ever since I started Thanksgiving dinner preparations including a trial run of the cornbread stuffing and the pecan pie, I’ve been feeling very bloated.  This only cleared up after the leftovers were finished.  Could I possibly be allergic to the cornmeal and corn syrup?  I’ve never noticed such symptoms before. 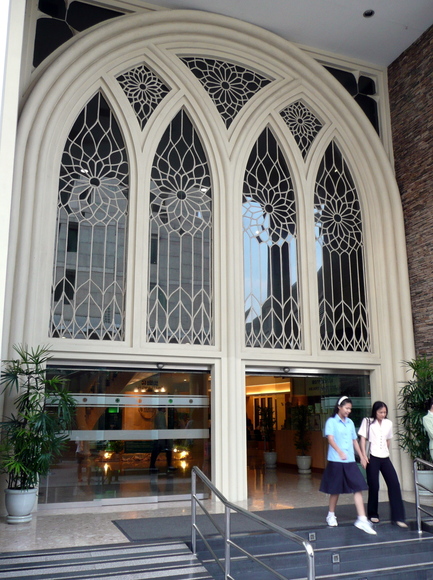 Aren’t the little serving dishes cute?  I needed something that would fit in the toaster oven as we don’t have a microwave and I don’t want to heat up the big oven to reheat dinner.

Tawn was feeling a little under the weather a few days ago, so I took him to the neighborhood hospital, Samitivej.  The lobby areas are so nicely decorated and have so much natural light that I enjoyed sitting there reading a magazine while Tawn saw the doctor.  Maybe I should just walk over and use their lobby as my living room.  I’m sure they wouldn’t really notice and probably wouldn’t mind.

Left, the windows at Samitivej Hospital.

There are many interesting things in the neighborhood.  You just have to get out and find them.  The other day we stopped at the local branch of Kasikorn Bank, right at the mouth of Thong Lor Soi 9.  To the side is a car park that is shared by several businesses and at the back of the car park is the customary spirit house.

This spirit house, however, was a bit unconventional in its mirrored mosaic tile decorations, below.  I like to call it “disco Ganesh”. 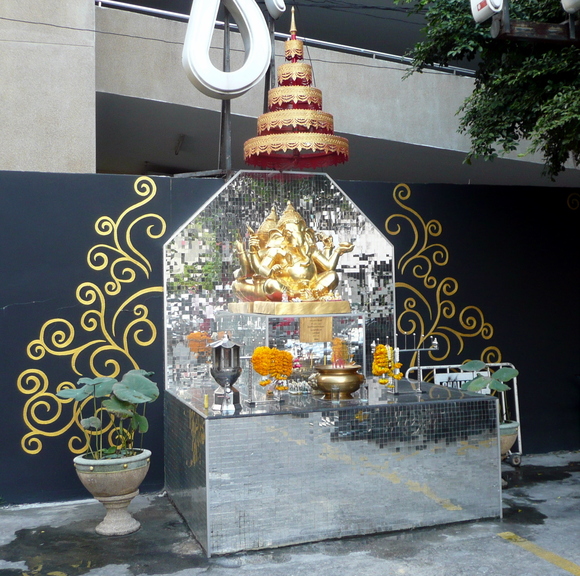 Over the weekend, I rode my bicycle to a temple down near Sukhumvit 109.  While there, I saw this cat sitting in the sunlight on the temple steps, napping.  It seemed wholly unconcerned as the worshipers took off their shoes, stepped over and around it, and went about their religious affairs. 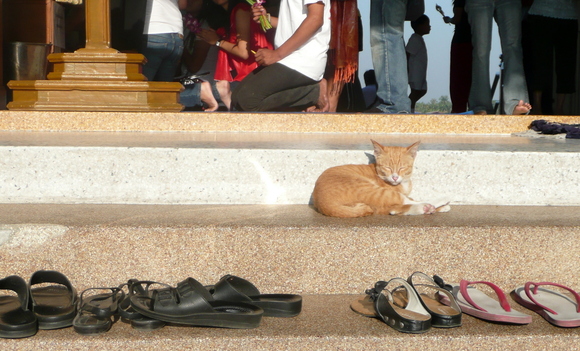 After the post-Thanksgiving bloated feeling, I came to realize that I don’t actually eat as much fiber and as many vegetables as I think I do.  I love veggies and I do eat oatmeal for breakfast each morning, but a lot of my lunches and dinners are mostly carbs and meat, even if the food is often Thai or Asian.

That has to change.  This week I have made a conscious effort to introduce more veggies into our diet.  For Tuesday night dinner, homemade chicken and spinach lasagna.  There’s only a single breast’s worth of chicken in this whole lasagna, the balance being made up of spinach, onions, tomatoes and mushrooms. 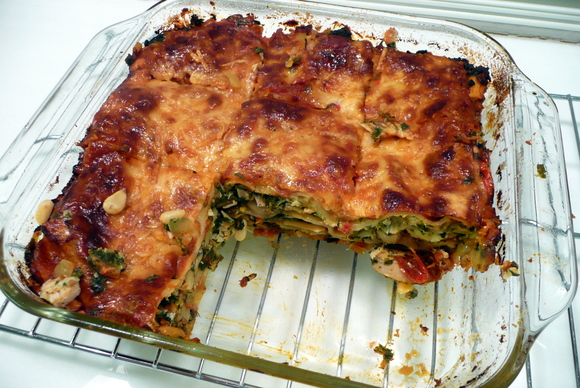 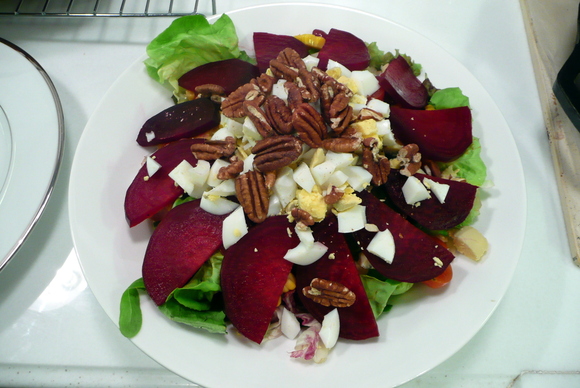 Now, if I can just lose ten pounds before Christmas, I’ll have plenty of room to eat all the holidays dishes I want, right?