For the past eleven and a half months we have been a household without TV.  That has been both a source of pride and inconvenience and wasn’t so much driven by principle as it was by finances: the TV in our apartment was part of the furnishings, so when we moved into our condo last December it was left behind.

As our “to finish” and “to furnish” lists continued to grow, a TV didn’t seem like a priority.  If we wanted to watch a DVD, there were our laptop computers.  And, truthfully, I don’t really like the way that a TV with broadcast television just sucks you in, turning you into a zombie even when there isn’t anything particularly interesting to watch.

So we were in no rush to get a TV even though we planned to get one eventually.  The big question was, “Where will we put it?”

Our recent houseguest Bruce commented upon first stepping into our condo, “Wow, it appears a lot larger in pictures.”  That’s true: we have just 68 neatly arranged square meters; just about 730 square feet.  And one thing that we don’t have much of is wall space.

In ongoing conversations about where we could put a TV, there were three possible locations: In the bedroom on the wall across from the bed, in the living room above the fireplace mantle, or in the office (“slash guest bedroom”).  Our thoughts about each:

The bedroom idea (below left) was a nonstarter.  I don’t think TVs belong in bedrooms.  Just my opinion – you are welcome to have a TV in your bedroom.  Plus, if one person wants to sleep and the other wants to watch TV, you have a conflict in the making.  On top of it, the sconces would have to be removed. 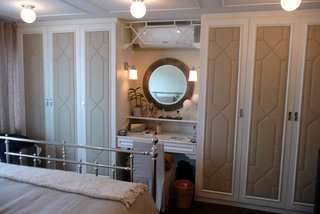 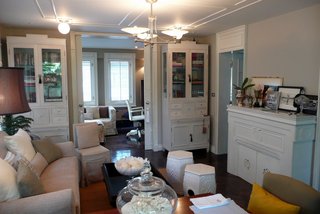 The living room location (above right) seemed the best bet.  We didn’t want the room to be dominated by the TV, but our designer came up with an idea of hiding it behind a decorative screen that could be folded open when we wanted to watch TV.

Just two problems remained: putting the TV there would fill up the mantle space leaving no room for decorative items.  Also, the TV would be awkwardly high.  From the sofa you would have to crane your neck or slouch way down in order to get a good viewing angle.  Not an ideal situation.

The office location, which has a love seat along with my computer armoire, seemed the best option.  But the entire reason we had purchased a two-bedroom condo was because when we had a one-bedroom and my “office” was part of the living room, there were many occasions when my work and Tawn’s TV viewing conflicted.  Especially when I had evening calls to the US and Europe.

We were at an impasse.  Each of the locations had drawbacks.  But on Saturday morning we talked about it again – Tawn has started agitating for a TV – and in the process of reviewing our options, we hit upon an elegant “middle path” solution.  We would place the TV on a rolling cart, normally leaving it in the office but moving it to the living room when necessary.

We purchased the TV on Sunday – funny story there that I’ll relate in a moment – and now have it placed temporarily on a two-drawer bedside table situated in the corner of the office.  The next step is to search for a TV cart that meets our needs.  Ultimately, we may ask the nice people at Bangkok Wood Company to custom design something, perhaps a piece that matches the coffee table.

We don’t have a DVD player yet, nor do we have cable (or even a cable outlet anywhere near the TV’s location) so all we can watch is static.  We’ll get there eventually.  Baby steps, right? 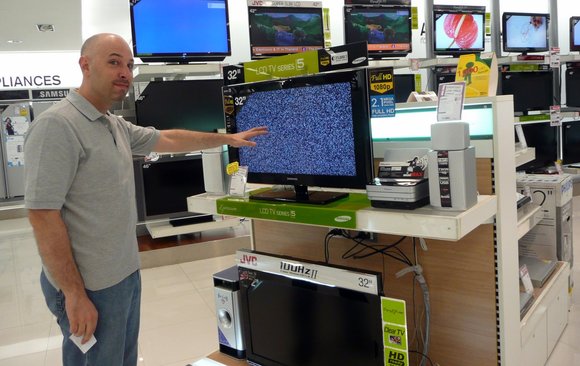 So the TV buying adventure: I’m sure some of this is a universal phenomenon, but I’m amazed at the extent that TV salesmen push you to bigger! better! more expensive! television sets.  After doing some online research, a Samsung series 5 32″ LCD seemed our best choice.  It is full HD (while Thai TV won’t broadcast in HD for several years, best to be prepared) and received good reviews for color density and other technical specifications.

Needless to say, the salesperson was skeptical that a series 5 would be sufficient for us.  Why not a series 6 or the brand new series 7?  And only 32″?  Surely we would go blind trying to watch that.  How could we live with anything less than a 40″ TV?  Better yet, why not get a 54″ model?

Here in Thailand, salesmanship is all about the freebies.  In the US, I think that price is the point of competition, but here it is about throwing in extras.  When we bought our wine cellar, we received a free digital camera.  And when it arrived, there was also a small hot pot cooker, a package of powdered laundry detergent (explain that to me!) and two or three other things.

At the Samsung store, we were offered a price of 29,990 baht and that price included a “home theatre system”, an upright vacuum cleaner and a Samsung digital camera.  Of course, we don’t need those other things.  In fact, the five speakers would completely overwhelm our viewing area and we already have a spare camera from the wine cellar purchase.  If we wanted to skip the extras, the price dropped to 26,990.

At Central Power Buy, the initial price was 36,000 baht with nothing included.  But when we explained what the Samsung store offered, the salesman conferred with his boss then countered with the 29,990 price and a free Samsung 22″ series 4 (HD-ready) LCD.  Two TVs for the price of one.  It makes you think they use these freebies to deplete excess inventory. 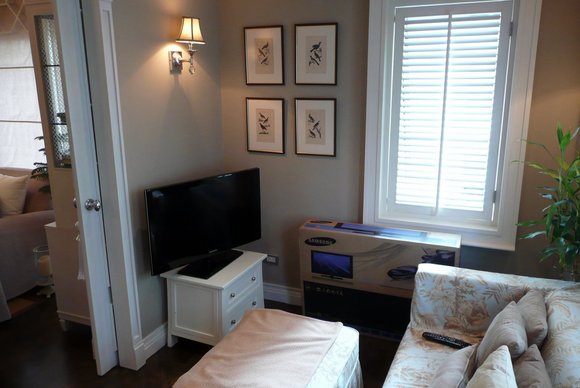 We chose Power Buy so now have a 22″ LCD that we don’t know what to do with.  Maybe I’ll use it to replace my 17″ computer monitor.  Maybe we’ll post it on Craigslist and see what we can get for it.  Maybe Khun Sudha will buy it for a reasonable price.

In any case, we are no longer TV-less.

43 thoughts on “No Longer TV-less”